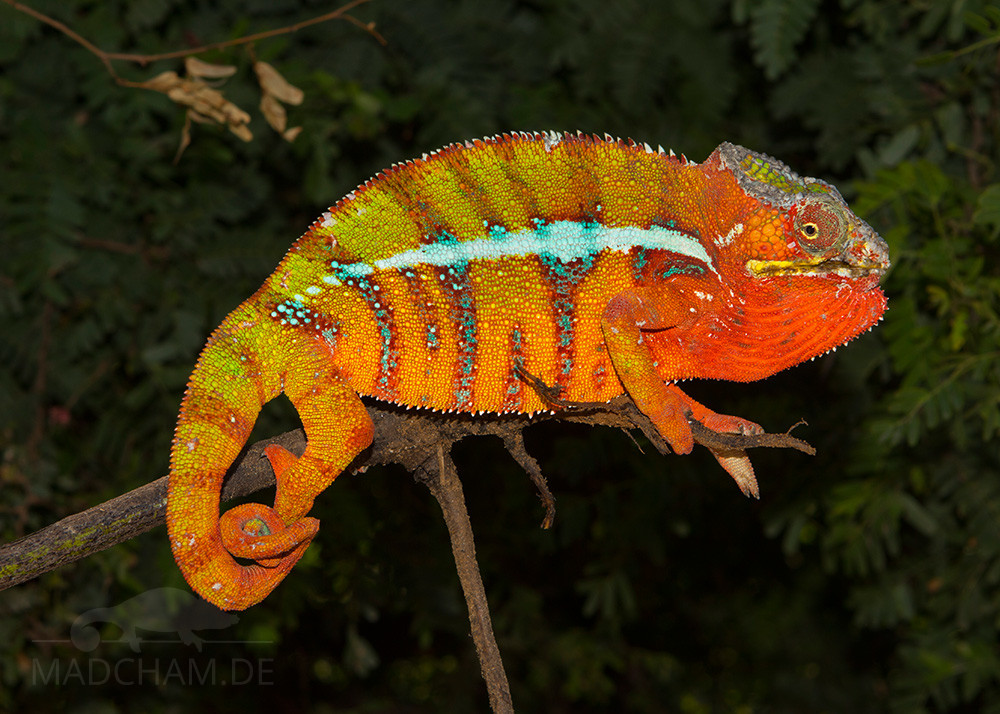 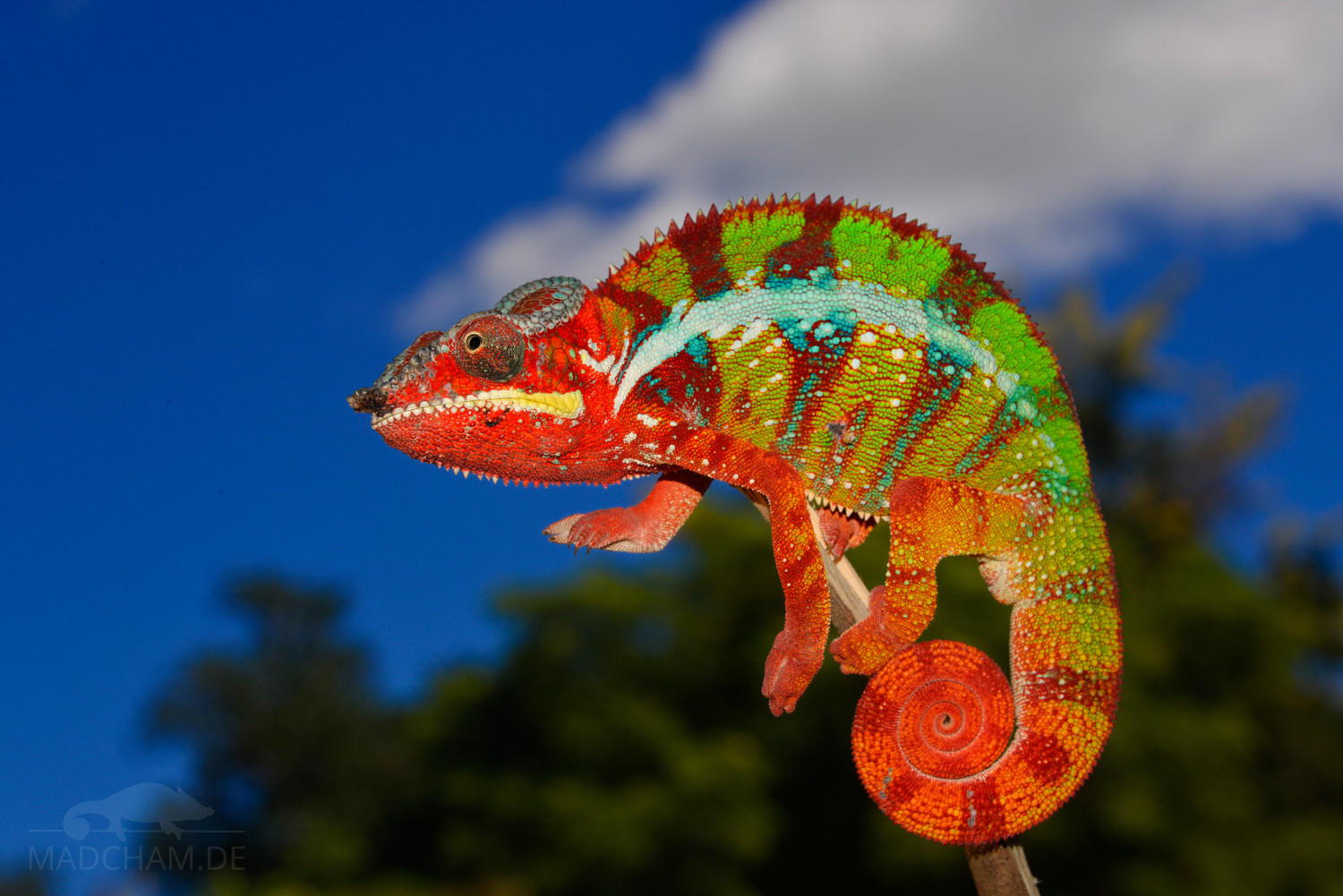 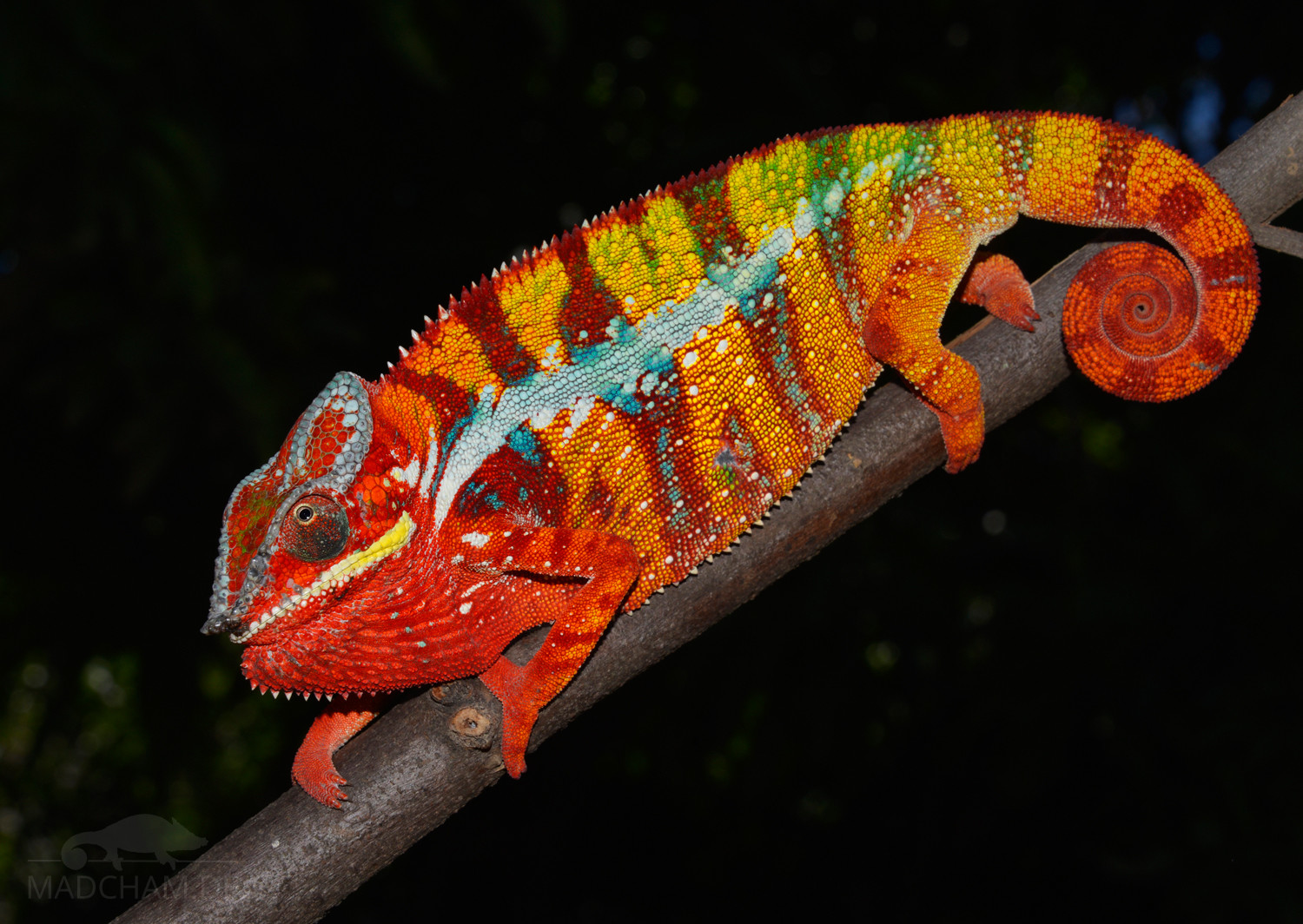 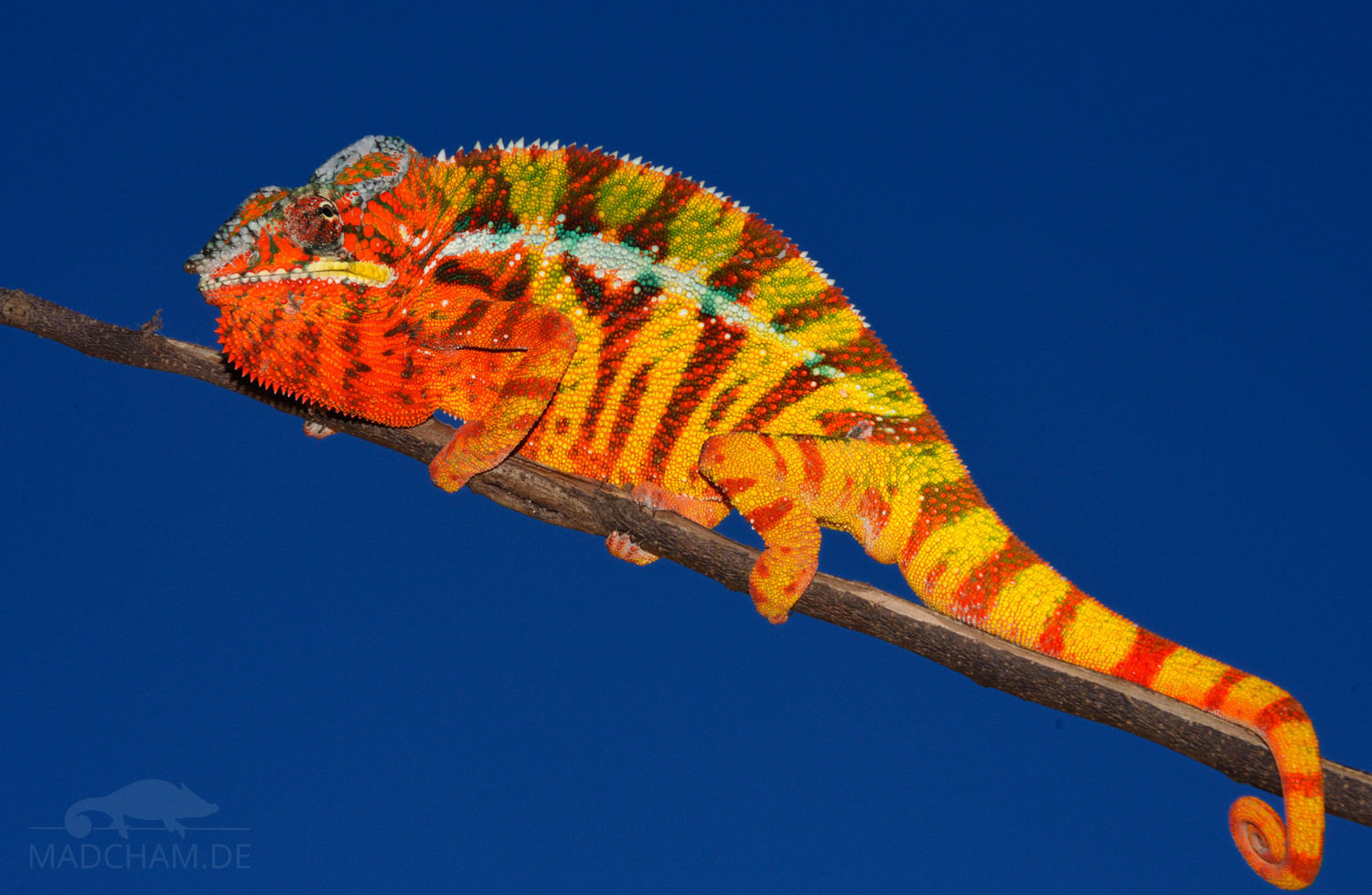 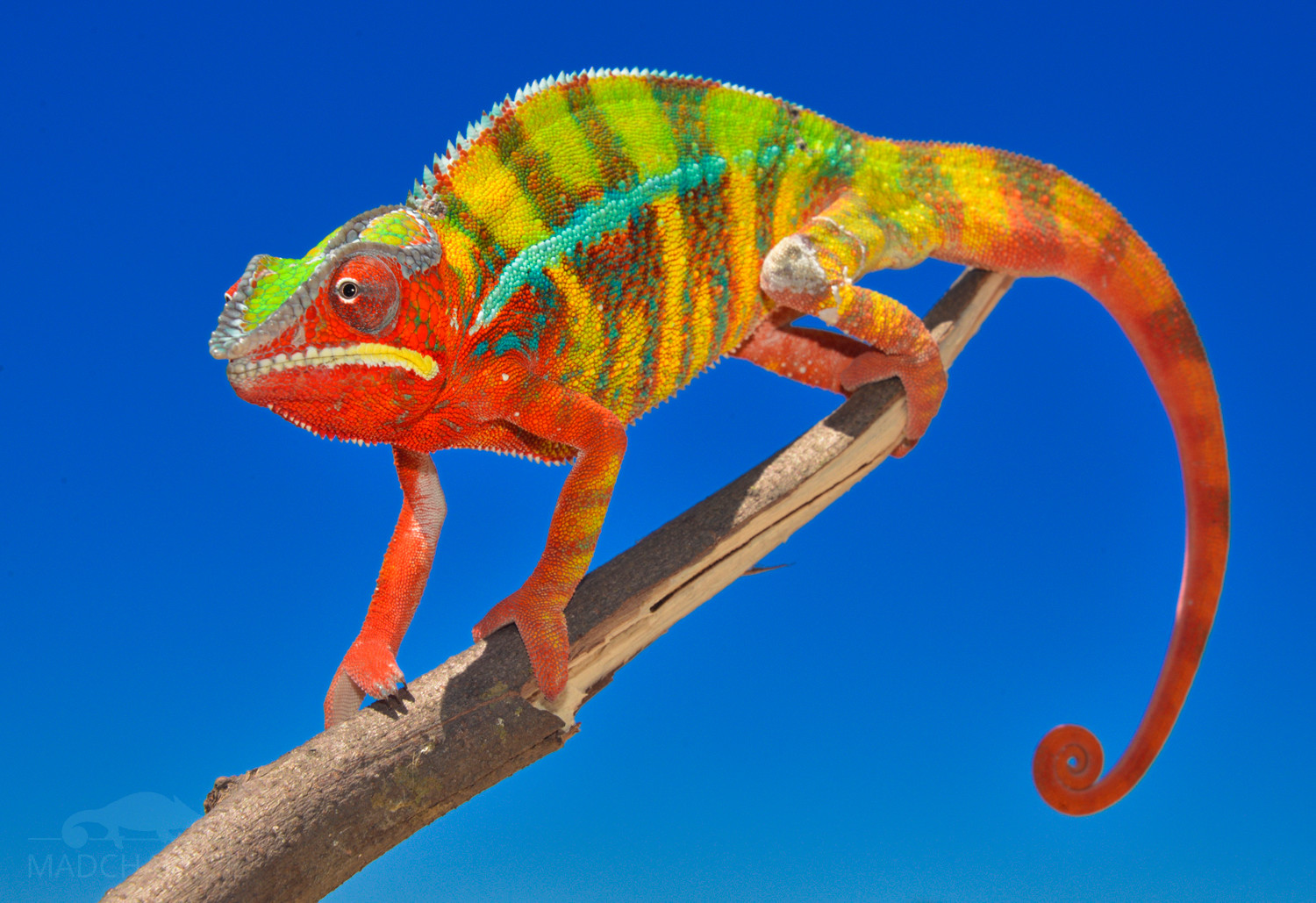 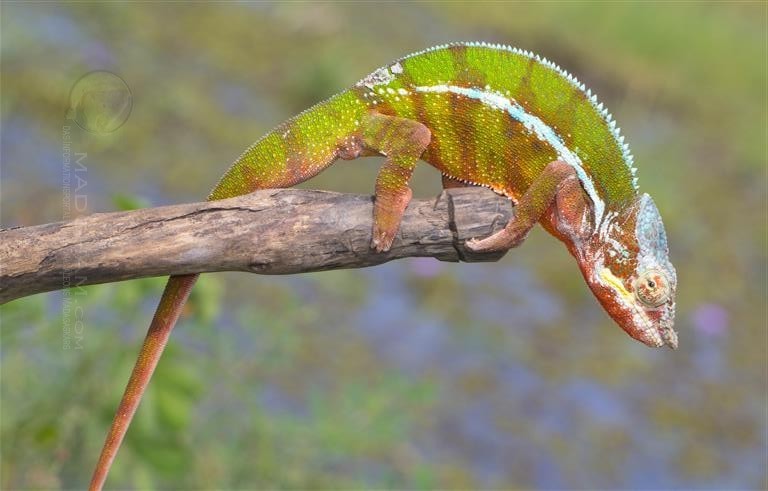 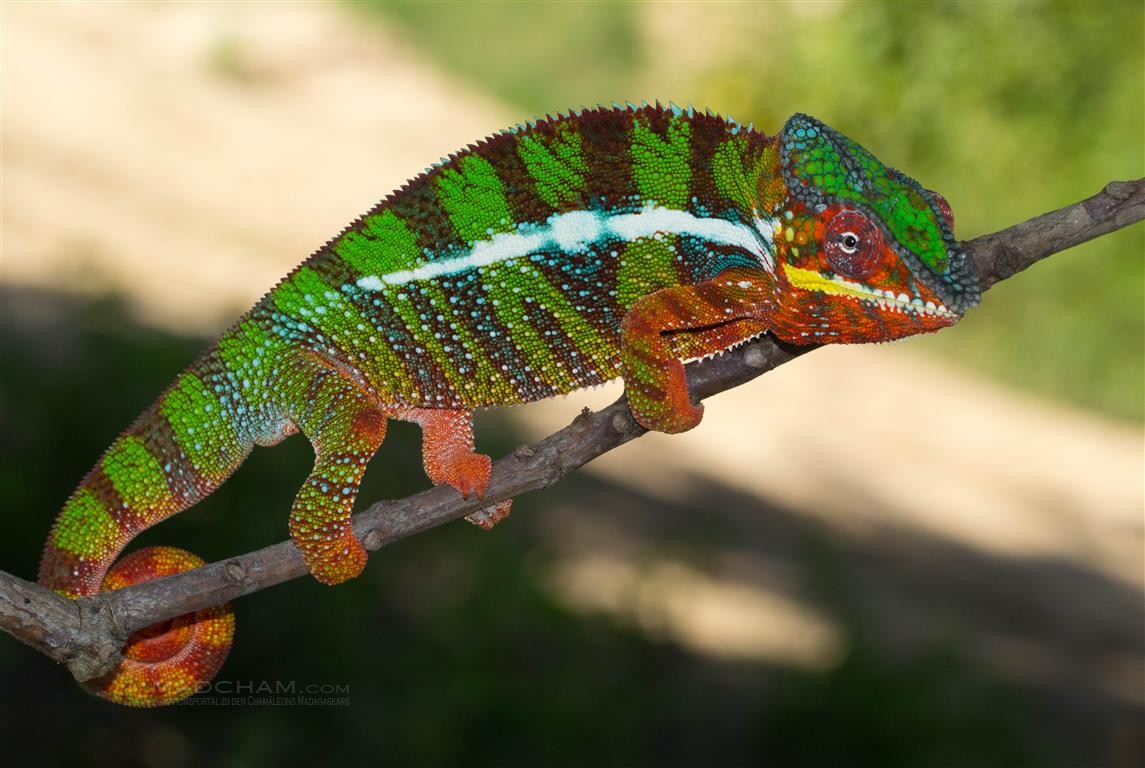 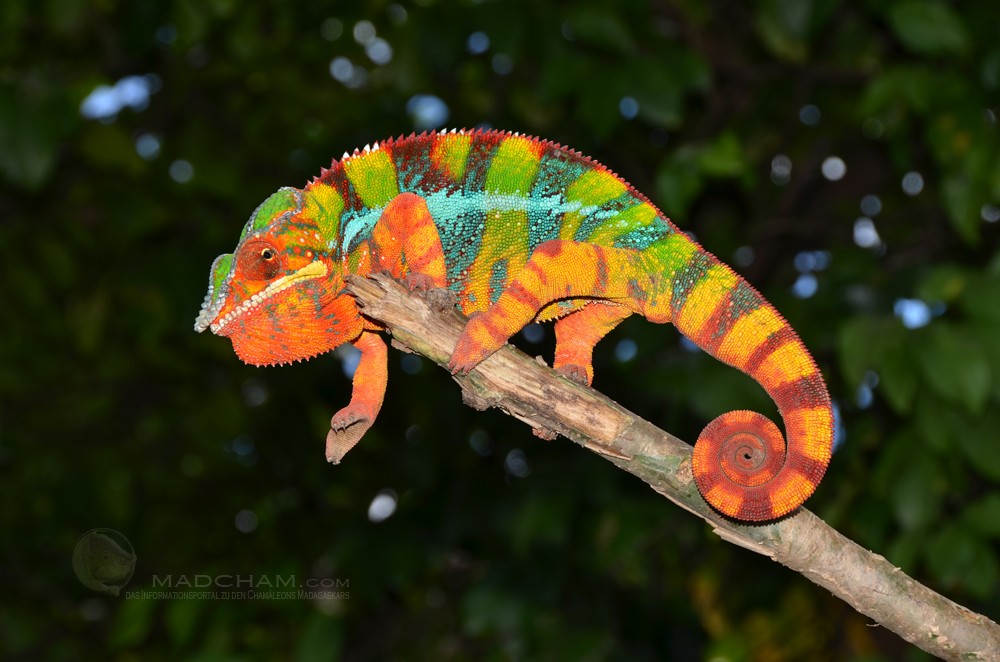 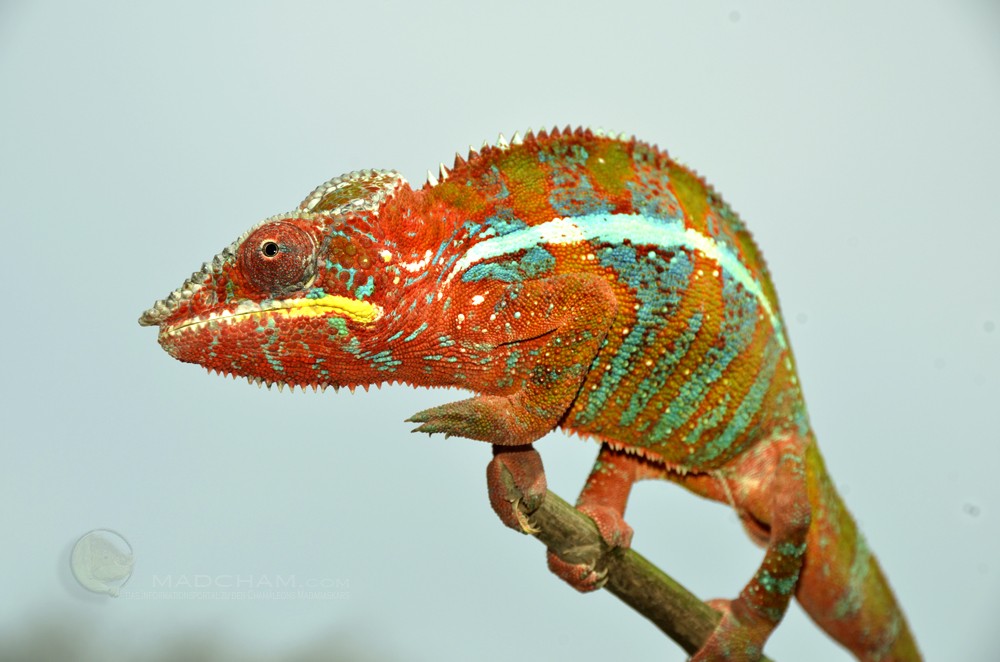 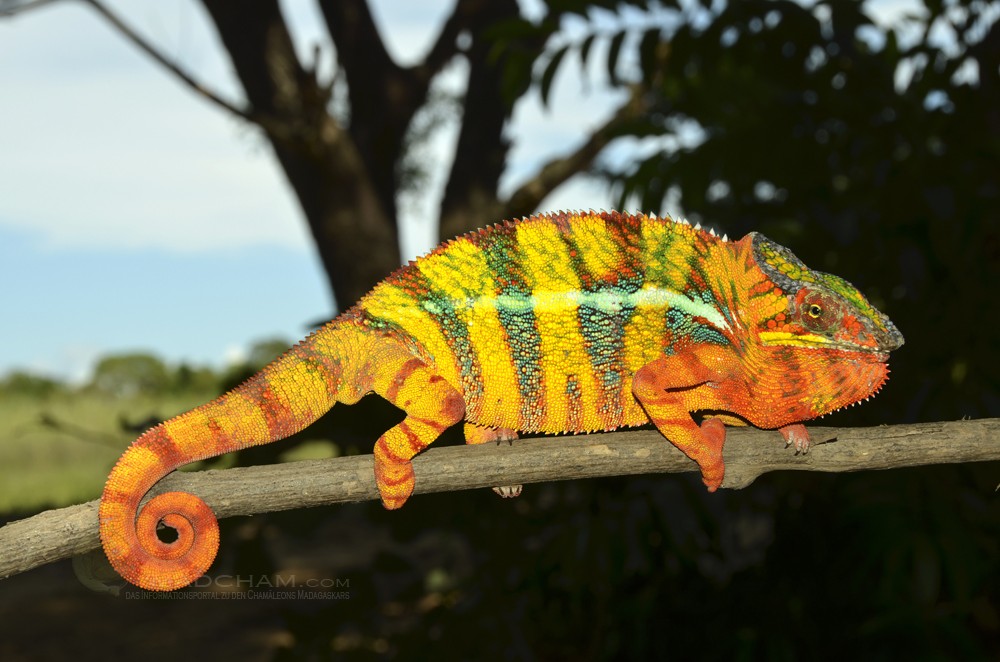 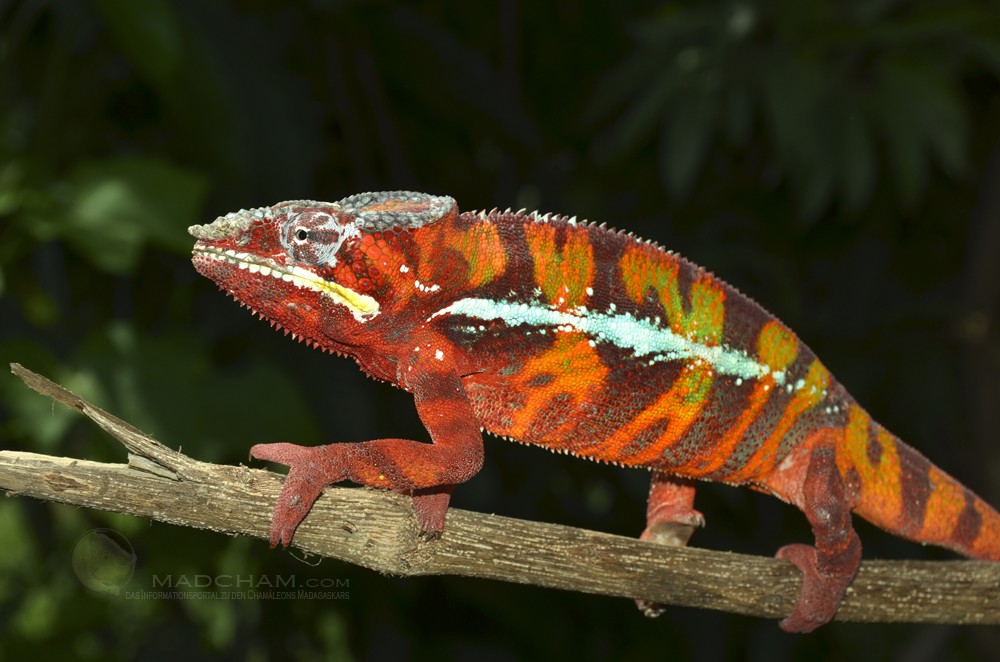 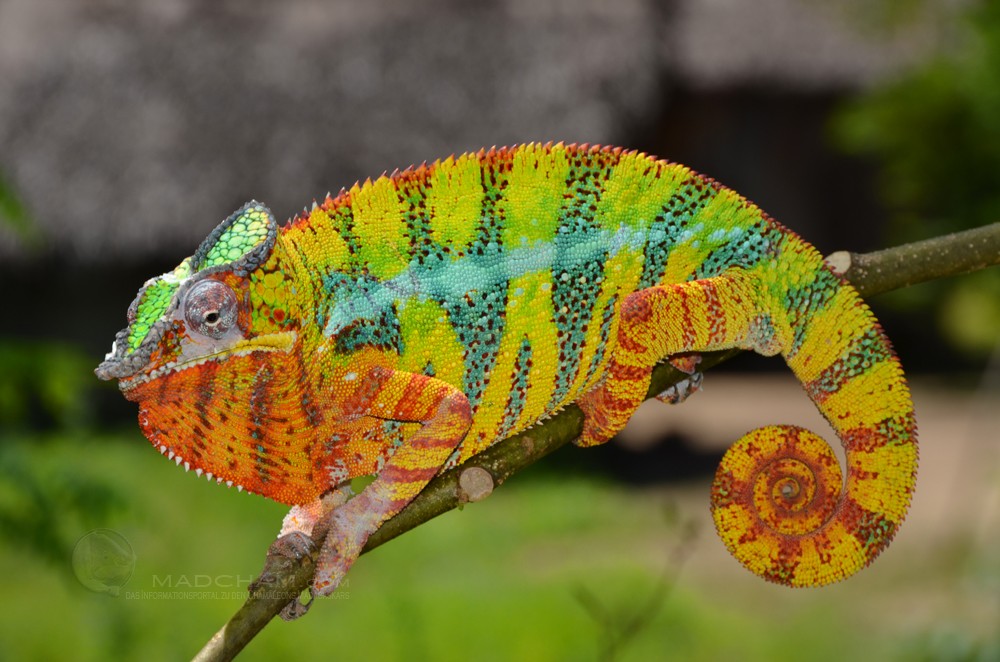 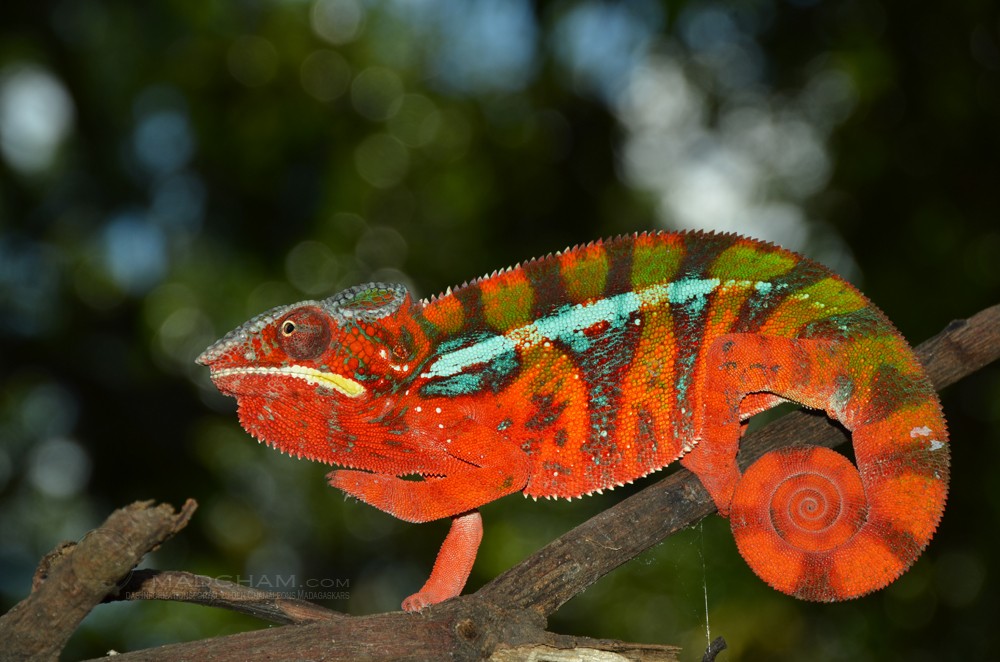 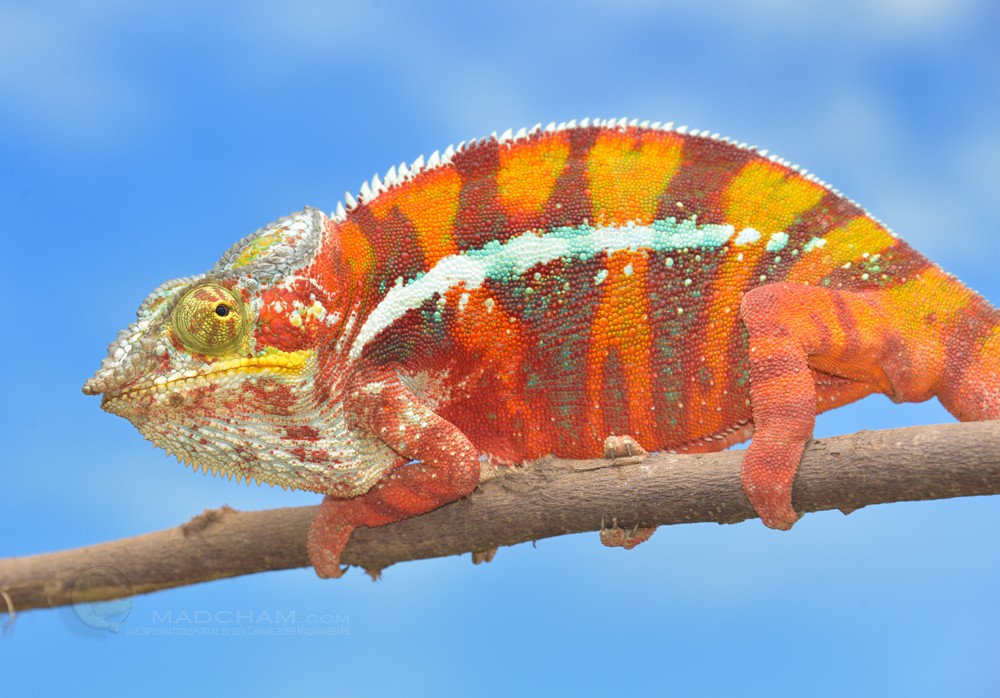 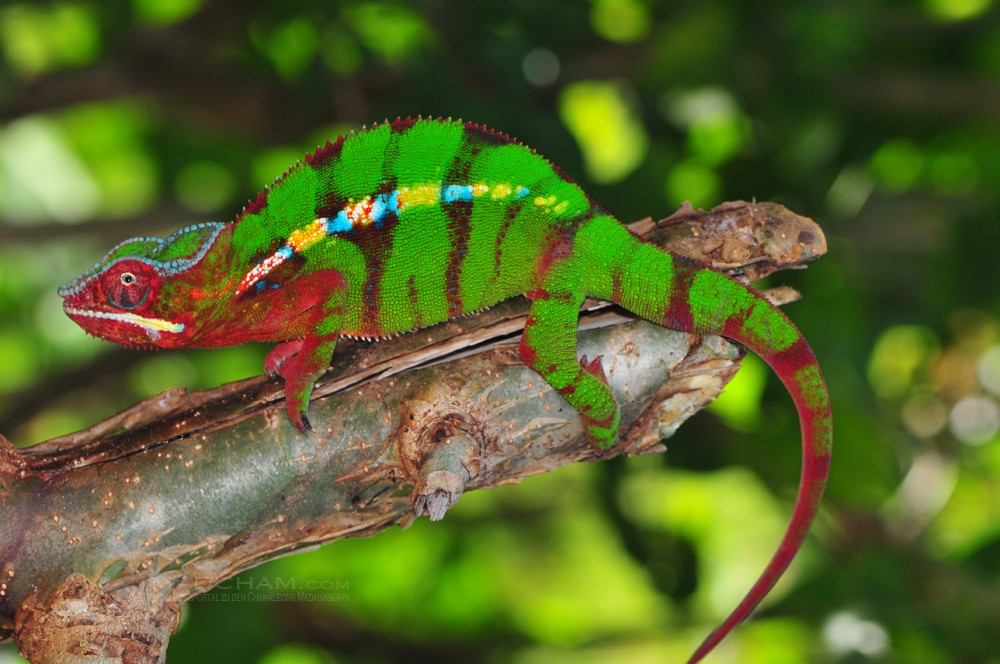 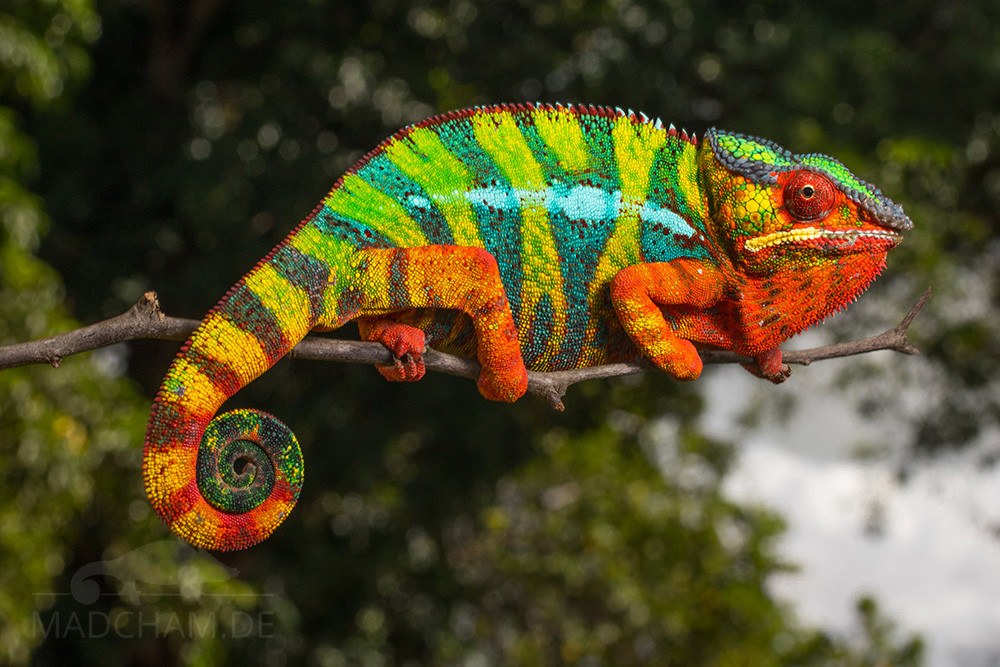 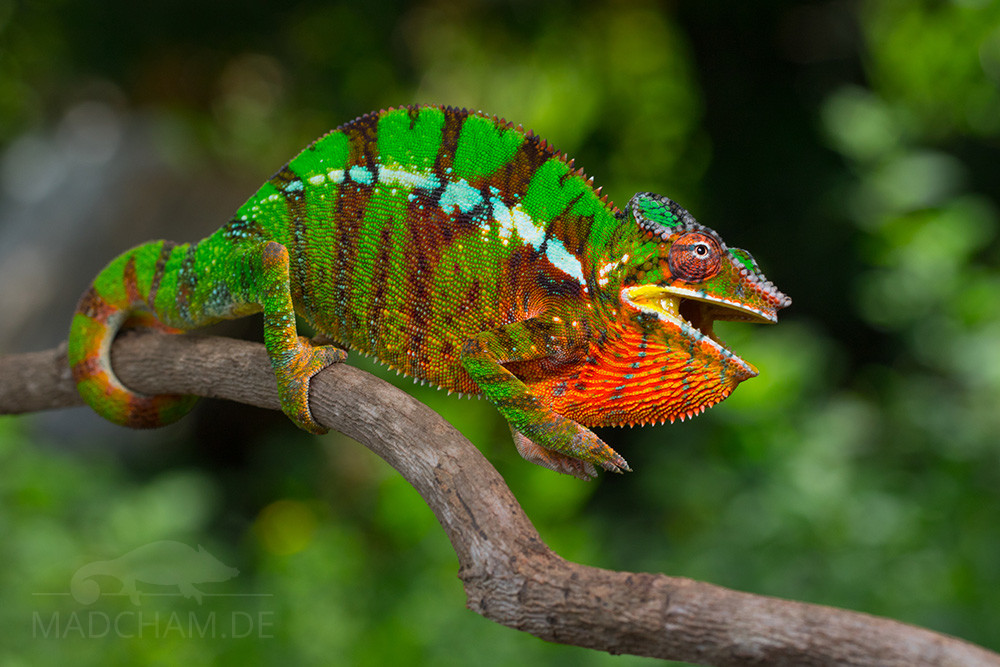 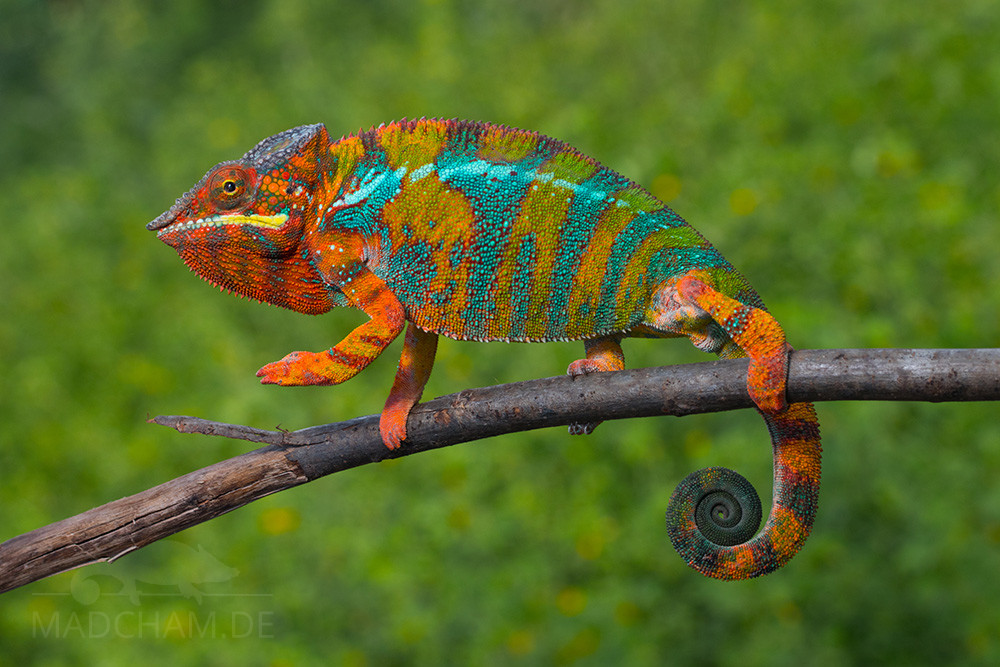 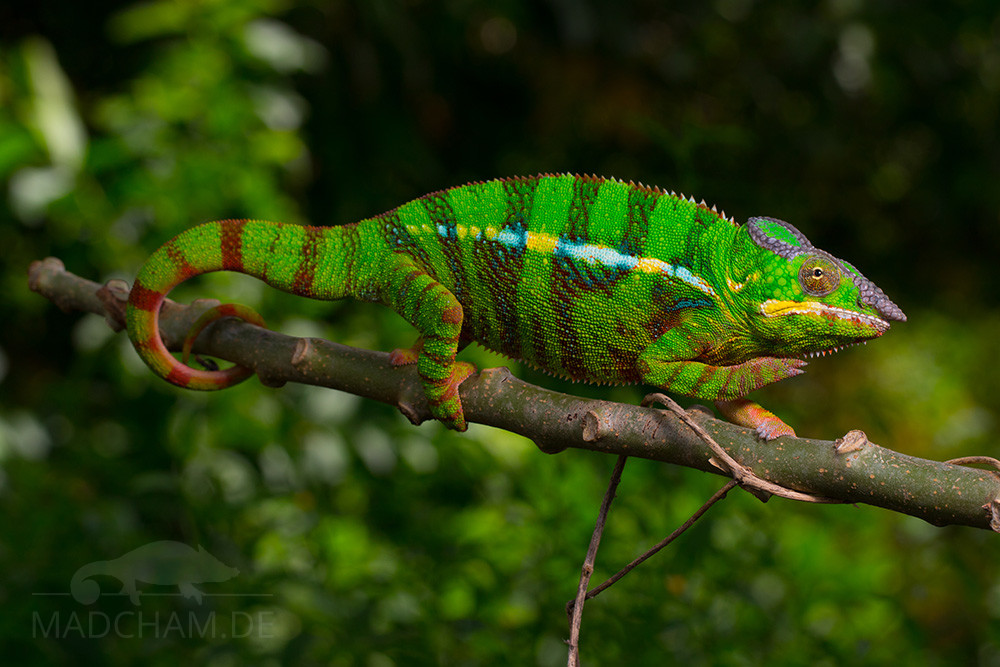 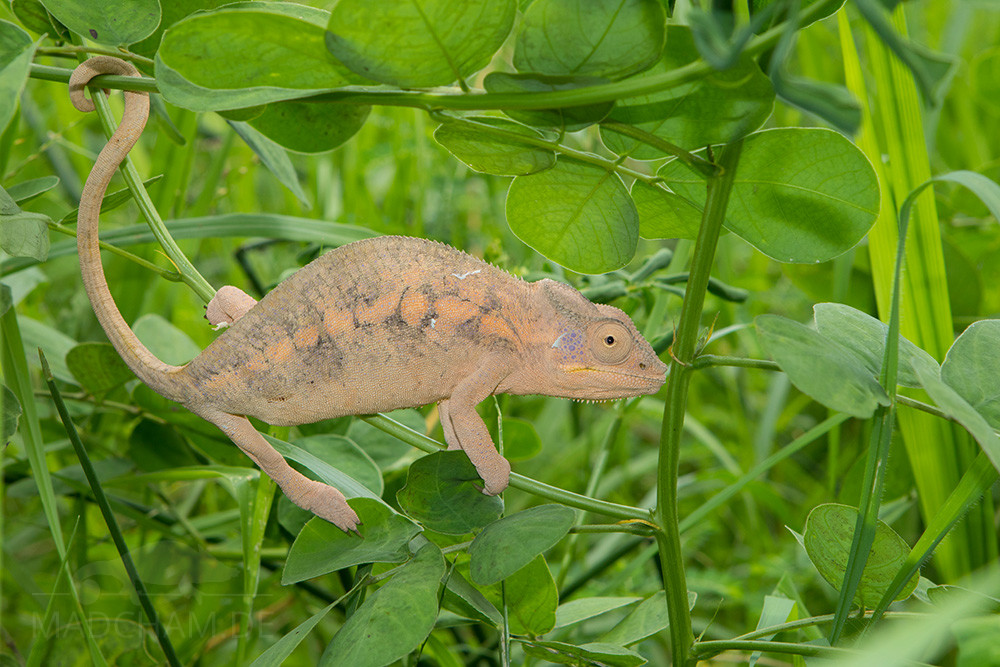 Ambilobe is a big, chaotic and very poor city in northwest Madagascar, located in region Diana near Ambanja. With about 50.000 inhabitants, it is a large city that is not a really nice place to be, just to be honest. Most people here usually consume Qat (a plant that is used as a drug).

Among herpetologists, Ambilobe is famous for its extremely colorful panther chameleons. You cannot find them inside the city itself, but easily around the surrounding plantations, and especially along the road from Ambilobe to Sirama. But ‘road’ is a rather optimistic point of view, actually, it is a holey sand and clay slope, edged by rice fields, sugar cane, and shrubs. Along these 16 kilometers, in spring you can find panther chameleons every other meter. Those are extremely colorful and we could not associate a special color with the one or the other location. Furthermore, there is no natural barrier (e.g. a river) between Ambilobe and Sirama that would make a separation between both local forms possible. Based on these facts, we see the local forms Ambilobe and Sirama as one joint local forms and not as two independent color variations. Sirama itself is a small city that has been built around a sugar company (Malagasy “siramamy” means “sugar”). In the direction of Ambanja, the region of Ambilobe is completely separated by a big river nearby Antsakamaromandio.

The colors of male panther chameleons near Amiblobe are very various. There are almost orange-colored animals with bright red crossbands as well as classic variations with blue cross bands on red and green ground or red bands on a green ground with red head. In between there is a lot of variations, may it be whiteheads, wine red cross bands or bright green ground colors. For several years, we have been watching that the big range of colors is declining and “extraordinary” specimens are partially lacking completely. We think this has to do with catching and high exports of these chameleons: The more extraordinary the panther chameleon, the higher is an exporter’s interest in it, because allegedly rare animals may fetch higher prices. Again and again, we meet men at the end of the rainy season who collect panther chameleons along the mentioned street.

Climate in Ambilobe is warm all year long with steady temperatures around 25°C. In rainy season, it is a little warmer and temperatures usually raise above 30°C. Temperature at night is slight. Additionally, with daily precipitatin from October to April, humidity raises and makes the climate prone to thunderstorms, especially in spring.

Between April and October it is dry season in Amiblobe, but in contrast to many other parts of Madagascar, you won't notice the difference to the rainy season so much. Days are a little less warm and night drops can fall to 16-17°C. But precipitation is still regular, so the area remains green throughout the whole year. Unfortunately, we have no ground temperatures for Ambilobe available yet.

The main habitat of panther chameleons here is secondary vegetation, especially along a clay piste between Ambilobe and Sirama. At the edges of rice fields in bushes, in isolated huge mango trees and high shrubs, you can find these animals – actually, they take what they can get as habitat. And this isn’t so much anymore, in 2016 local people cut a majority of the mango trees along the road. But between wooden huts and rice fields, there rests a lot of green where panther chameleons can survive.

Hereinafter you can find some 360° pictures from the road between Ambilobe and Sirama. You can move inside these pictures via mouse click in all directions. If you click on the Theta logo, a new window with an enlarged view will open. You will also have the opportunity to look at the pictures in full-screen mode. Enjoy! 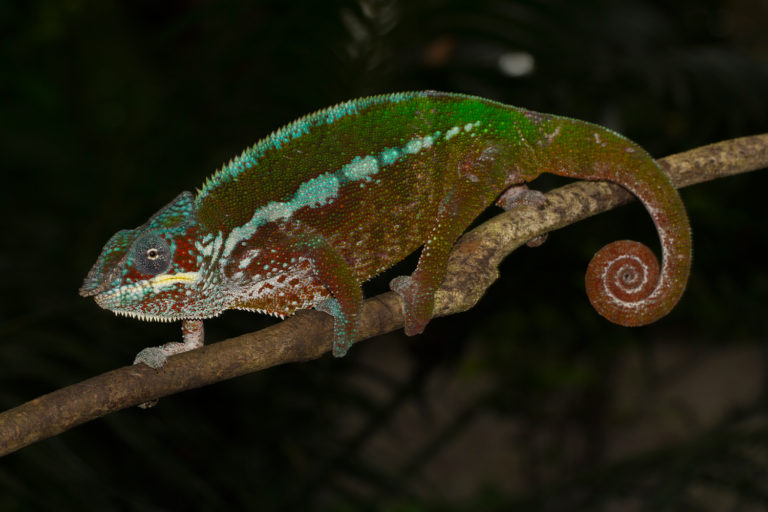