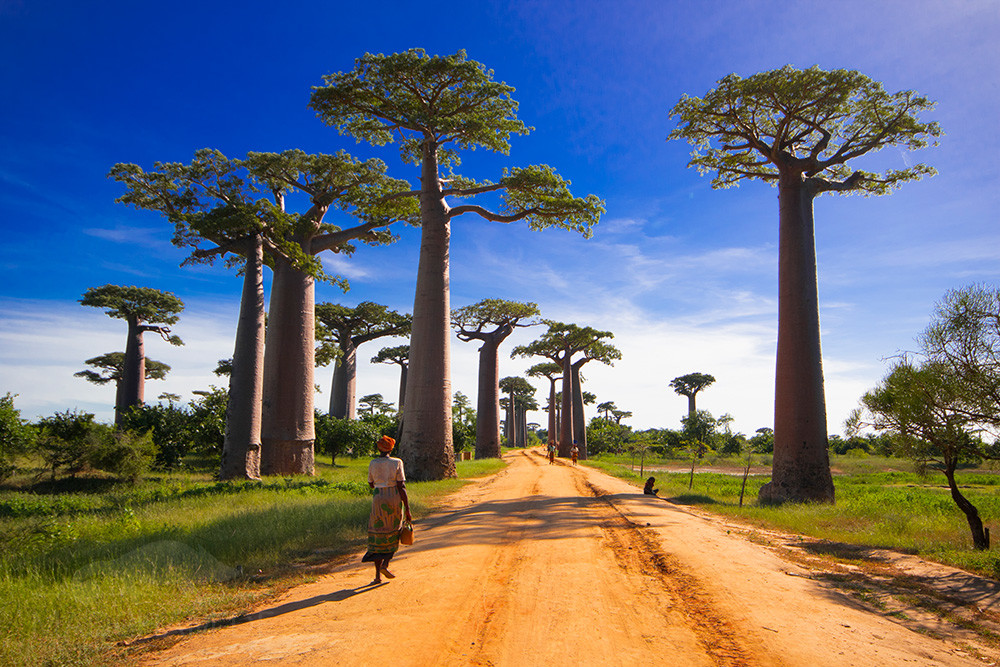 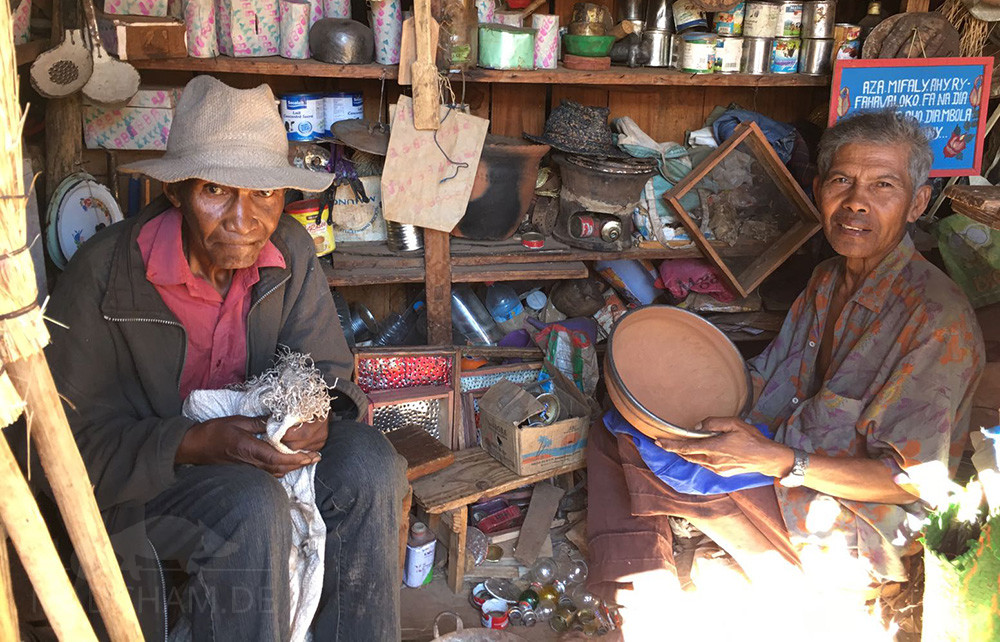 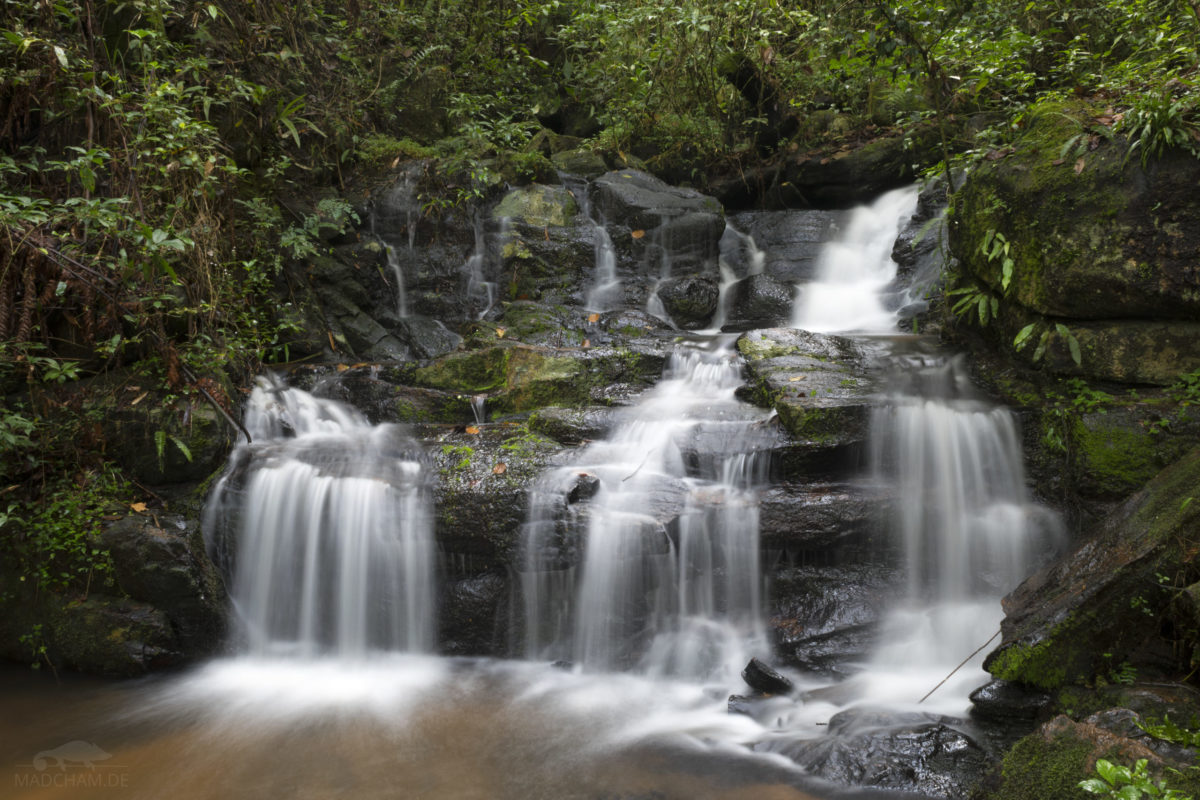 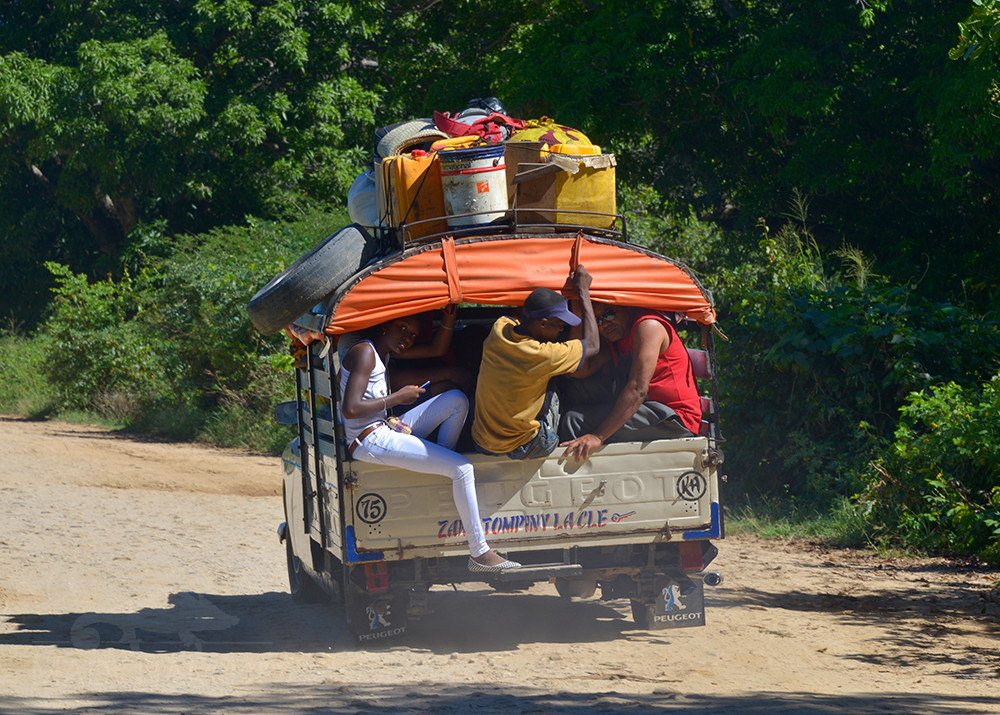 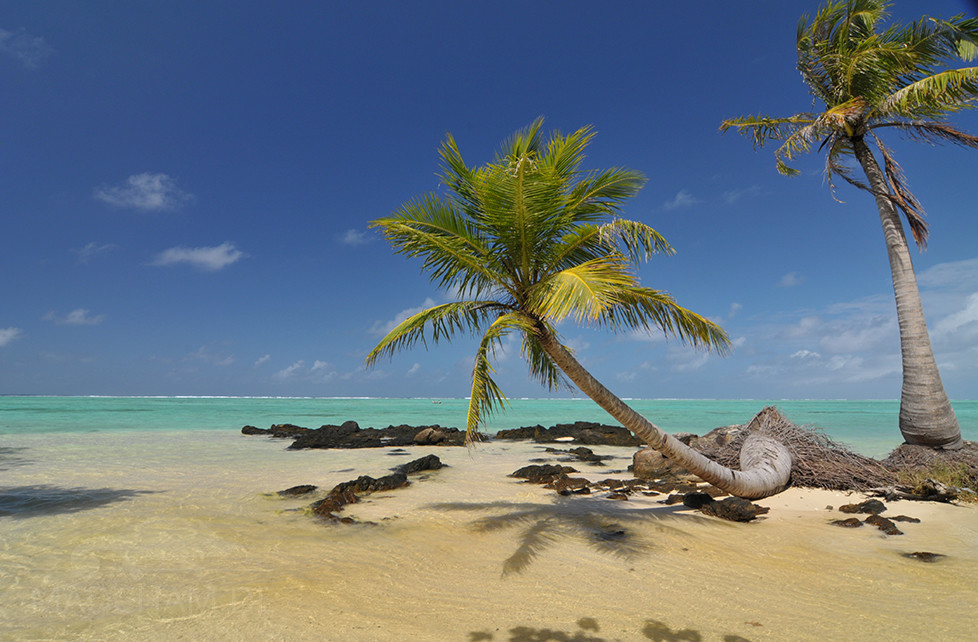 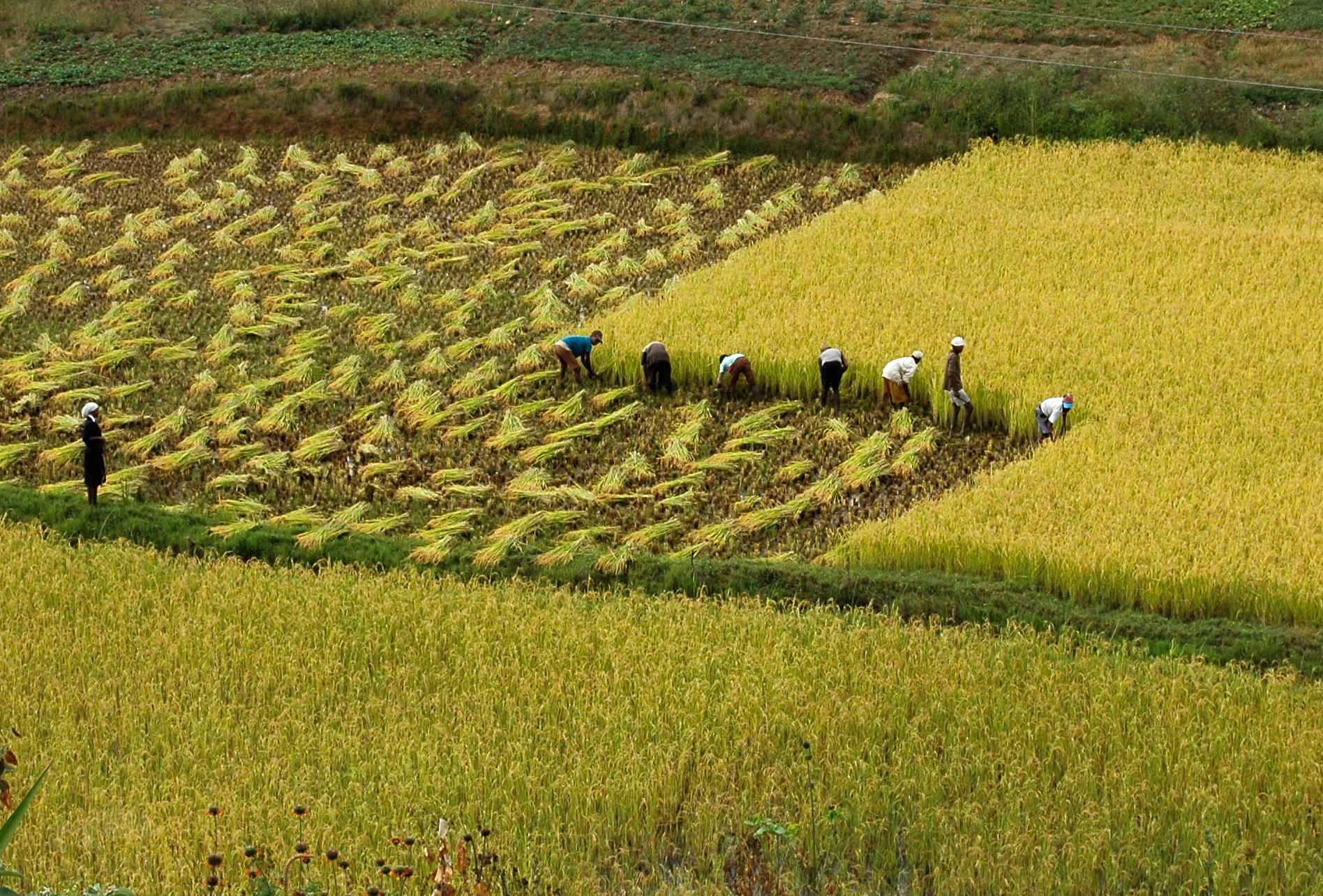 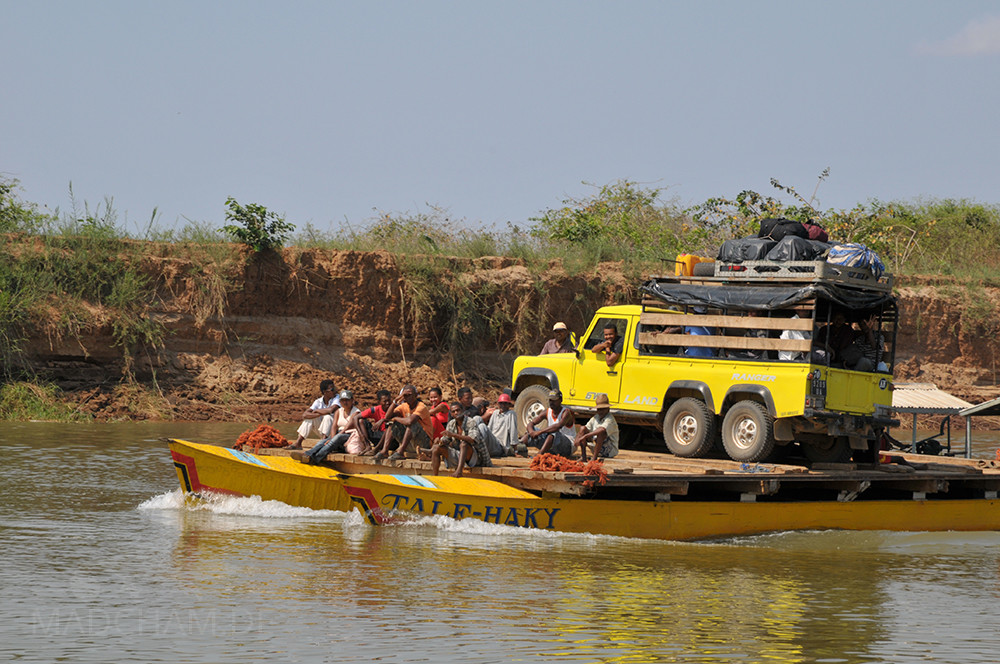 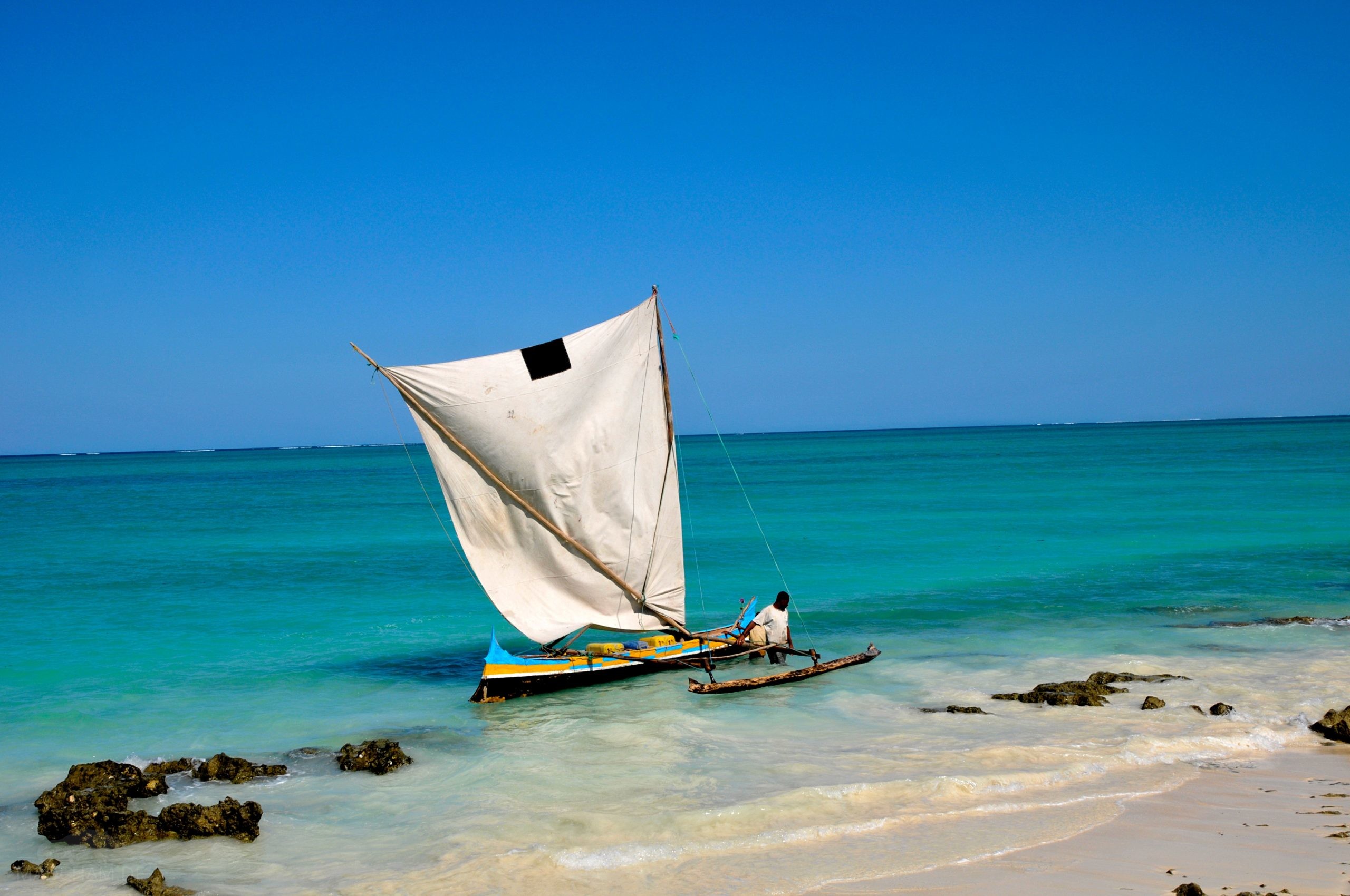 Madagascar is the fourth largest island in the world with 587,295 km². This is more area than France and Switzerland together. Madagascar is located in the Indian Ocean, about 500 to 600 km east of the African continent, depending on the coastline. About 24 million people live on the island. They are divided into 18 different tribes. Each tribe has its own dialect, culture, and tradition. Their common language is Malagasy, which is distantly related to Indonesian. Madagascar’s capital is Antananarivo. If you fly to the island you’ll always arrive there first.

What makes Madagascar so special 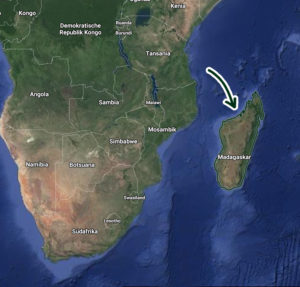 Madagascar separated from mainland Africa about 160 million years ago. It then separated from India about 90 million years ago. Since then, Madagascar has lain in the Indian Ocean without contact with other countries. Because of this extremely long isolation, Madagascar’s plants and animals have developed an incredible, unique diversity. More than 80% of the creatures found here are endemic, i.e. they only occur on the island. Madagascar is therefore also called a hot spot of biodiversity. This refers to countries that together make up only 2.3% of the earth’s surface, but are home to about 70% of the world’s animals and plants. What exists in Madagascar is therefore not only extremely rare but also particularly worthy of protection.

However, Madagascar has a second side besides its fantastic nature. The country has been one of the poorest in the world for decades. Most people live on less than two dollars a day. More than 85% of Madagascar’s inhabitants have no access to electricity or running water. Outside of cities, medical care is almost non-existent. More than 60% of Madagascans are under 15 years old. Traditions and ancestor worship are deeply rooted and changes to people’s living situations are slow to take effect. However, we are increasingly seeing that the people of Madagascar are learning to understand the incredible wealth that their island offers. And that this treasure must be preserved, because only then can people live well from it. And no matter how poor the people are: Everywhere in Madagascar you are greeted with a smile. Cordiality and hospitality are written in capital letters everywhere on the island. Mora Mora is the mantra of Madagascar. It means something like “take it easy” or “slowly, slowly” and describes life on the tropical island quite well. Here the clocks go differently in the truest sense of the word. And you always find a solution for everything, no one is as creative as Madagascans are – just certainly not fast.

Madagascar combines a whole range of climatic zones on a single island: the highlands have a rather Mediterranean climate. Characteristic for the highlands are the countless rice terraces, which provide the main food of the Malagasy. Each Madagascan eats about 120 kg of rice per year. The east coast, on the other hand, consists of dense rainforest. A mountain range, where it can even freeze, separates the humid east coast from the rest of the country. The south and west of Madagascar are hot and dry. There are several small islands with white dream beaches and colorful coral reefs in the turquoise sea in the north and on the east coast. In short: Hardly any other country in the world can compete with such a great variety of landscapes.

The habitats of plants and animals in Madagascar differ enormously due to the different climates. Everything is there from the bizarre thorn forest with baobabs and spiny succulents to the permanent rain forest with high humidity or savannahs with the relatively sparse landscape.  Only one thing unites the whole island: The year is divided into a rainy season, which lasts from November to March. From April to October, there is the dry season.

Madagascar is currently home to exactly 97 different species of chameleons. This corresponds to over 40% of the world’s chameleon species. No other country in the world has so many chameleons! Several species are still waiting to be discovered, so there are probably more than 100 chameleon species actually living on the island. Madagascar is a real treasure chest for chameleon lovers – and that is exactly why it is our favorite travel destination. Every year there is still something new to discover here, new species to marvel at, new behaviors to observe, and new colorations to admire.

During our travels in Madagascar over many years, we have repeatedly experienced that many Malagasy do not touch the chameleons or are even afraid of them. To a large extent, this discomfort may be due to lack of education:  Nearly half of the Malagasy can neither read nor write and many more know nothing about chameleons. In addition, there are myths and fairy tales about the amazing lizards. “The chameleon sees the future with one eye and the past with the other,” says a Malagasy proverb, attributing to chameleons a role as ambassadors between worlds. You need to know that the ancestor cult is traditionally very strongly rooted in Madagascar. The living must make good with their ancestors to achieve prosperity and happiness in their own earthly lives. For a Malagasy, deceased family members are extremely respectable, continue to be part of the family, and can intensely influence the lives of the living. In most areas of Madagascar, the chameleon is therefore considered an animal that it is better not to kill or hurt, but it is best not to cross its path in the first place. Depending on the village or family, there may be local fadys, taboos, concerning chameleons. Only in some villages, chameleons are actually considered bad luck. In some places far away in the country, people run away screaming if you show them a chameleon. 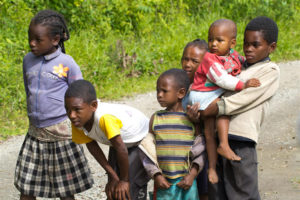 If we find ourselves somewhere to take pictures, a whole bunch of people usually gathers around us in no time. They eye chameleons suspiciously but are very curious about what exactly the Vazaha – the white people – are doing there. By the way, this behavior is not so much limited to Madagascar. In Germany, some people look strangely when you lie on your stomach on the ground next to a dirt road to photograph a lizard.

However, the general distrust of chameleons also has a decisive advantage: Chameleons are not deliberately killed in Madagascar. Nevertheless, they suffer from habitat loss due to slash and burn, logging, grazing zebus, and increasing agriculture. From time to time, chameleons are accidentally injured while working in the fields or cutting down trees. At least they are not eaten. 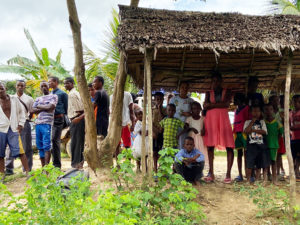 Where Vazaha take photos, many onlookers soon gather – like here in Ankaramibe in northwestern Madagascar.

Only in protected areas and national parks, there is generally less mistrust of reptiles. However, since lemurs are considered the more “interesting” animals, only a few guides explicitly deal with chameleons. We want to change that! For years we have been doing extensive education about chameleons, their habitats, special features, and why they are worth protecting. We provide dedicated guides with reptile field guides and teach them how to handle and identify reptiles and amphibians. For children, we bring coloring books to the island to make even the smallest ones aware of the topic of species conservation. In a small forest on the east coast, we reforest bare, burned corridors to create new habitat for Madagascar’s fauna.

We show local people that chameleons are harmless and that ecotourism is a good chance to improve the living conditions of all involved in a nature-friendly way. In Madagascar, we now have a whole network of chameleon-experienced guides and friends who can identify species with certainty and know their characteristics exactly. It wouldn’t work otherwise: If you don’t know how and where the chameleons you want to see live, you won’t find them. 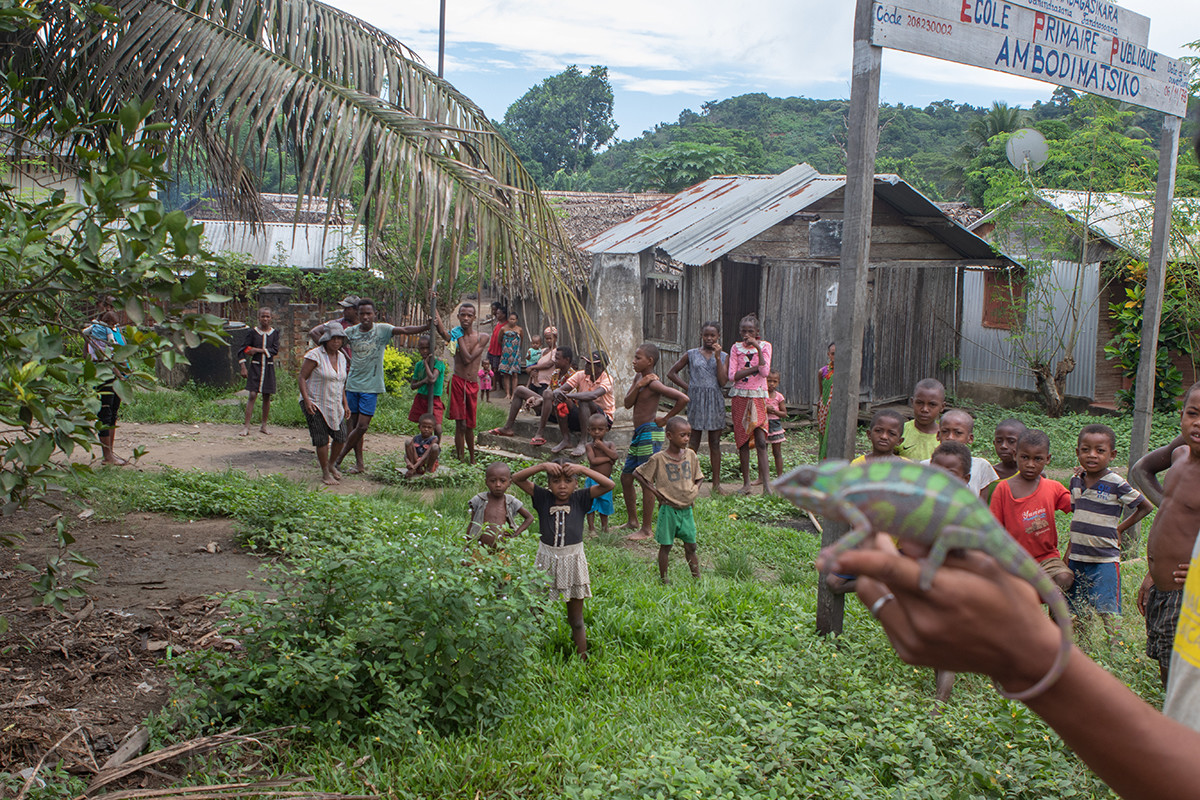 Men, women and children of all ages eye a panther chameleon in a small village near Sambava in northeastern Madagascar

Have you become curious?

You can become part of our expeditions. Here you can find more information. More information about Madagascar, the cultures and traditions of the island, its people, and its biodiversity can be found in MadaMagazine. 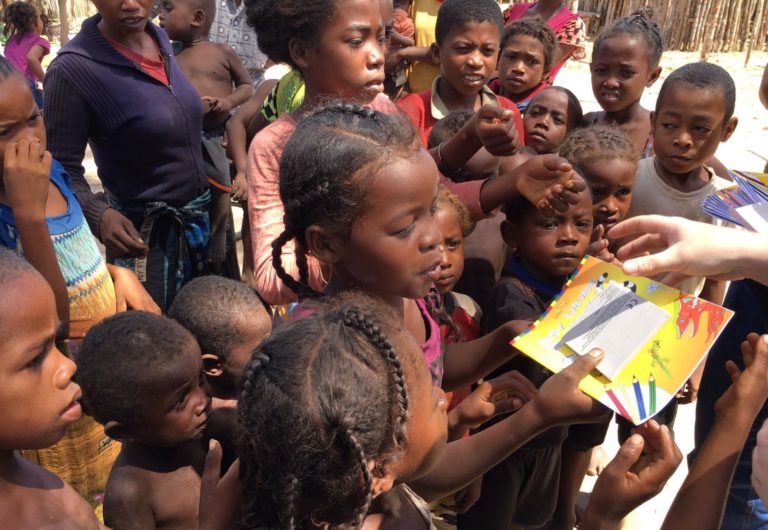