Almost everyone in the terrarium will sooner or later become acquainted with them: Small pests on plants that let their hosts die slowly and leave unsightly, greasy traces or webs in the terrarium. Many of them can be controlled well without harming chameleons. This page is intended to give an overview of the plant pests frequently found in terrariums and some tips on how to get rid of them.

Mealy bugs in close up

Scale insects are sticky little pests on certain plants with shield-shaped bodies (hence the name), under which the females lay countless eggs. Scale insects grow up to half a millimeter in size and feed on plant sap, causing the infested plant to die slowly. The sticky honeydew (only lidded scale insects do not produce any!) and the large females themselves are the signs that are usually the first to be noticed on the plants in the terrarium. Many scale insects are covered with a waxy secretion, which makes them difficult to control and allows them to survive even at very low temperatures. The most common species is the citrus aphid, so named because of the white, greasy, soft secretion it wraps itself in. Aphids are also known as mealybugs and mainly infest herbaceous plants, citrus plants, vines, pineapples, orchids, and succulents. If they are removed, they leave typical white spots on the plants.

Aphids on a Hibiscus

Aphids also suck plant sap, but unlike other aphids, they can serve very well as feeders for small chameleon species. Aphids excrete so-called honeydew, which not only attracts ants but can also serve as a breeding ground for sooty dew fungi on plants. There are winged and unwinged forms, both of which are easily recognized on plants. Their removal leaves no traces on the plant itself. 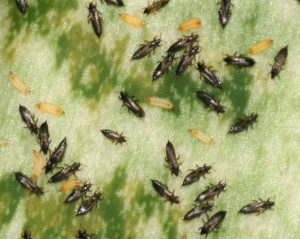 Thrips (fringe-winged fly, black fly) grow up to three millimeters and have four wings, but hardly ever fly. Some species eat plants, causing mainly visual damage in the form of bright, silvery spots (similar to spider mites) or plant gall (small round bumps on leaves and stems). They can also sting false hosts like humans.

The whitefly is a winged species of lice. The body and wings of these plant pests are covered with flour-like wax dust, which is also noticeable on the infested plant. They lay their eggs on stems, the larvae sit on the undersides of leaves in a thick layer of wax. Whiteflies are also occasionally found on food (especially vegetables). 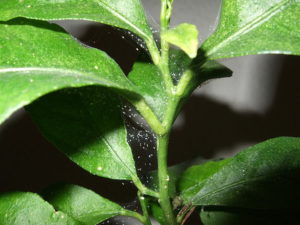 Spider mites grow up to 0.5 mm in size, have eight legs and a yellowish to reddish oval body. They are easily recognized by two darker spots on their back. Each mite lays about 200 eggs on the underside of plant leaves. The mites themselves live two to four weeks and feed on plant sap. On infested plants, you can find small yellow spots on the leaves. Little by little the leaves begin to turn completely yellow or brown and dry out. Another typical feature of spider mites is white, fine nets on the infested plants.

Plants are usually attacked by pests when the climate surrounding them is not suitable. For example, too little light and heat can promote infestation. When choosing plants for your terrarium, you should check beforehand if the desired plant is suitable or if it would be better to leave it on the windowsill.

Effective against many lice, but also very laborious is wiping by hand. With a rag and soapy water, you wipe every single leaf carefully. In the terrarium, a plant treated with soapy water should be rinsed with clear water afterward.

In nature, plant pests are eaten or parasitized by various other insects. This can also be used in the terrarium by using the predators/parasites of the pests. The experiences here are very different. With light infestation, the use often helps, with strong infestation rather no more. It is important to correctly determine the type of pest in the terrarium and to select exactly the beneficial insects that are specialized in this. It may be necessary to apply beneficial insects several times to achieve success.

The beetles and especially the larvae of the Australian ladybird (Cryptolaemus montrouzieri) feed on mealybugs, which like to spread on figs, unlike most of our native ladybirds. In the terrarium, these beneficial insects are very useful, because they need high humidity and are only active at temperatures above 20°C. The larvae are usually available in cardboard or plastic tubes from specialist shops. These can be shaken out over the plants in the evening (not during the day!). The remains of the exterminated lice dry up and gradually fall off the plants. The beetles themselves are also eaten by chameleons as food animals. Caution: The larvae of the ladybirds look very similar to mealybugs, but are bigger and more agile.

The seven-point ladybird (Coccinella septempunctata) is among others native to Germany. The beetles and the larvae, which are up to one centimeter in size, eat aphids. These beneficial insects are obtained as eggs on cardboard or foil, which are laid in the infested plants and removed again after the larvae have hatched (after about a week). 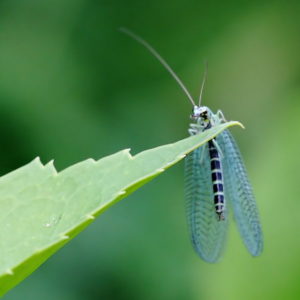 The imagines (adult flies) and larvae of lacewings (Chrysoperla carnea) feed on aphids and mealybugs, spider mites, and thrips, whereas in all other genera of lacewings only the larvae eat lice. These beneficial insects are now commercially bred and are available in agricultural trade. Usually, the larvae are delivered in small cardboard boxes, which are simply poured onto the plants in the terrarium in the evening. After two to three weeks the larvae pupate and become lacewings. 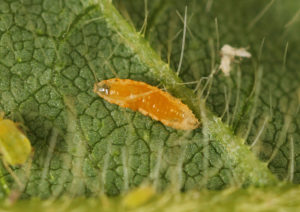 The larva of a gall midge
CC BY-SA 4.0 Rsbernard

Gall midges (Aphidoletes aphidimyza) are orange-colored insects up to two millimeters in size whose larvae feed on aphids. They are easy to establish in the terrarium, as the larvae need high humidity, plenty of light and temperatures above 20°C. Gall midges are usually available in the agricultural trade as pupae on a moist substrate. This is placed on the terrarium floor under the infested plants together with the pupae. The gall midges hatch out of the pupae and their females lay countless eggs on the affected plant after a few days. 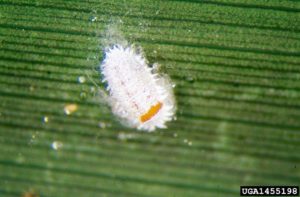 Mealybug that has been parasitized by an ichneumon fly
CC BY 3.0 Whitney Cranshaw

These ichneumon flies parasitize mainly mealybugs. They only help in cases of slight infestation, otherwise it takes weeks to months before success is visible. Usually both species are used at the same time. Leptomastix dactylopii prefers nymph stages, while Leptomastidea abnormis parasitizes mainly the finished lice. These beneficial insects are only active from about 25°C.

These ichneumon flies, which are up to two millimeters in size, parasitize the scale insects themselves. The lice swell up and die, causing them to turn black.

Predatory mites, as you can get them by mail

Phytoseiulus persimilis are orange-colored mites up to one millimeter in size. They feed only on spider mites. They also need high humidity and at least 20°C. Predatory mites can be purchased in a substrate that is sprinkled on the infested plants.