Fog is actually nothing more than a cloud hanging very close above the ground. It occurs when the temperature of the air and the dew point are almost the same. Fog occurs in almost all rainforests of Madagascar’s east coast. Other chameleon habitats such as the northwest, west, and south of Madagascar are significantly less foggy. Some even only have some form of precipitation on a daily basis (e.g. the extreme south), some have virtually no fog or dew all year round. So not all chameleons in Madagascar come into contact with fog regularly or at all – it all depends on where their habitat is.

Fog can be created artificially by saturating the air with water or by spraying water very finely. The following article will shed light on where the differences between fog in the habitat and artificial fog in the terrarium lie and what risks foggers might include.

In human medicine, a distinction is made between “respirable” and “non-respirable” in droplet size. This means which droplet size can enter the lungs and which cannot. Inhalation into the lungs is possible from a droplet size of 5 µm, but only smaller droplets with only 1 to 3 µm reach deep into the small alveoli of the lungs. For reptiles, especially chameleons, there are currently no comparable values. By analogy, however, it can be assumed – until corresponding studies on chameleons are available – that similar values may apply. In a nutshell: The smaller a drop, the deeper it gets into the lungs.

In the case of many nebulizers offered for terrarium use, the manufacturer does not specify the actual droplet size of the nebulizer offered. Nebulizers manufactured for the medical sector (which are more expensive to purchase but offer disinfection directly in the device – see next section) provide droplet sizes between 0.8 and 5 µm. This droplet size is far below the natural fog in the rainforest on Madagascar, so it has little to do with the imitation of “natural” conditions in the terrarium. If you want to imitate natural fog, you can use rain systems with a suitable, larger droplet size instead.

Settlement by bacteria, cleaning, and disinfection

Bacteria are basically everywhere, they inhabit all surfaces inside and outside the terrarium, including the skin of chameleons and us humans. Even sterilized (= all germs have been killed) material is directly repopulated by bacteria in a non-sterile environment. In terrariums, the germ pressure is usually significantly higher than in the natural habitat due to the limited size of the space alone. 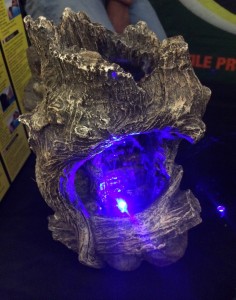 Many foggers from pet shops, mostly quite inexpensive to acquire for less than 100 €, are not separable into all components. Many parts can be cleaned badly or not at all thoroughly (first of all hoses), so that always microscopically small remainders remain, which naturally also contain bacteria. Some bacteria can also form slime films, which protect them from removal during rinsing.

Foggers were and are called in the terraristics “germ producers” since the combination of warmth and humidity in the terrarium provides for a particularly good bacterial growth and the bad cleaning possibility of many economical devices leads to these bacteria being blown directly from the fogger into the lung of the chameleon.

With ultrasonic nebulizers and other human nebulizers, which are usually much more expensive, bacteria are already reduced in the device itself. It does not become sterile as a result. This reduces the problem of the “germ spreading”. The problem remains unaffected, however, that the tiny droplets in the terrarium on the way from the fogger to the chameleon lung can take bacteria and other particles with them. The probability that this happens is much higher in the terrarium compared to the natural habitat. Here the droplet size also comes into play: The smaller a droplet, the higher the absorption of bacteria (and other particles) from the environment.

Influence of temperature on bacteria

For some time now, chameleon holders have been thinking that you only have to use foggers at night. Due to the nightly drop in temperature in many species, bacteria would no longer be able to reproduce at night, so the “germ spreading” problem would be solved. Unfortunately, many of the germs involved in chameleon respiratory diseases are those that can multiply excellently even at low temperatures. Pseudomonas aeruginosa, for example, a bacterium very often involved in pneumonia, is even known as a “refrigerator germ” and reproduces best at 15°C. Even at 5°C – hardly any chameleon terrarium can achieve this at night – pseudomonads can still reproduce. And in this respect, it should be remembered that not every chameleon should have a nightly drop in temperature up to 10-15°C. For example, panther chameleons from Ambanja or Ambilobe do not experience these temperatures even in the cool dry season in their natural habitat.

Structure of the chameleon lungs 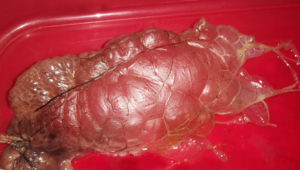 The inflated right lung of a panther chameleon

Chameleons have very special lung anatomy: their lungs are large, hollow spaces with further bag-like bulges (air sacs) and do not consist of a dense tissue of bronchi and alveoli as in mammals. Due to the bag-like shape, the filigree, extremely thin membranes, and little elasticity, the chameleon lung is unfortunately susceptible to bacterial infections. In addition, the animals cannot cough (since no diaphragm is present), which denies them the possibility of transporting liquid or mucus in the airbags upwards via the trachea.

The occasionally mentioned regurgitating, with which the animals choke mucus out of the mouth head over heels, has nothing to do with the lung or even a cough-like behavior. When regurgitating, mucus is transported out of the stomach through the esophagus, often with inedible food components. This can be tested relatively easily by placing a small amount of mucus under a microscope: Small food animal remains and also sporadic stomach wall epithelia can be found in it.

There are still many chameleon patients in veterinary practices who are presented due to respiratory diseases, especially pneumonia. In these diseases, an immune system that is severely restricted in its function due to poor husbandry plays a major role. Foggers are often part of the terrarium equipment of the affected patients. In chameleons, lung diseases require protracted treatment and are often fatal.

However, foggers (or rather inhalers) are also used therapeutically in veterinary medicine. They are used to bring active substances such as antibiotics or antimycotics (agents against bacteria and fungi) directly to their place of action, i.e. in the case of pneumonia to the bag-like lung. Here, the small droplet size is used to bring an active substance directly to the site of the disease. However, even in human medicine, where conditions are far more hygienic than in the average terrarium, there are always problems with very resistant bacterial contamination of the equipment used.

Whether and how fog actually plays an essential role in the water supply of chameleons is much discussed. However, the anatomy of chameleons and their behavior suggests that the water supply, like that of other reptiles, is mainly provided by the mouth. There are exciting studies on microornamentation in chameleons and other reptiles, which show a certain structure of the scale surface under the microscope for each species. For some reptiles, it has already been shown that the structures on and between the scales are useful for water supply. Water is directed towards the nose and mouth angle, where it can be absorbed and swallowed.

In Madagascar, we also observe every year that chameleons begin to drink actively after a few minutes of intense rain. This behavior can also be triggered in the terrarium by letting rain systems run longer or spraying them more intensively by hand. We have not yet observed this behavior in fog alone, although the condensation of water droplets in fog through probably existing microornamentation could also lead to water intake. It is very unlikely that chameleons will absorb significant amounts of water via the lungs or regulate their water balance mainly via the lungs.

We expressly do not recommend foggers for use in chameleon husbandry. Our experience in keeping chameleons for many years and our experience in the veterinary practice place the risk far above the benefit of foggers in chameleon terrariums. In addition, the only purpose of the fogger – the water supply – can be easily achieved in our eyes with other, much less risky means such as rain systems, drippers or spraying by hand.