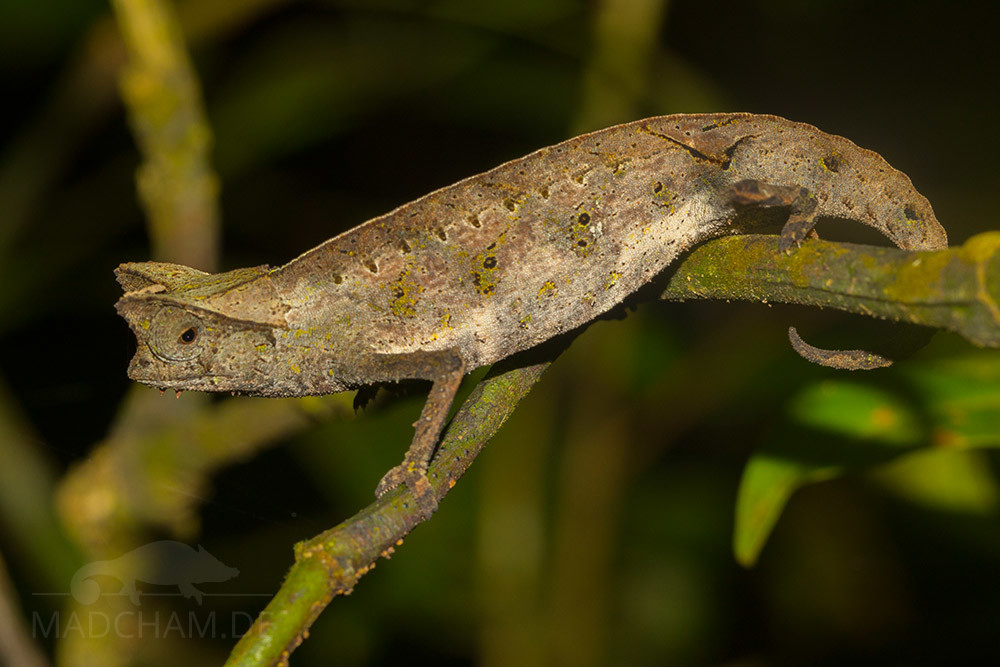 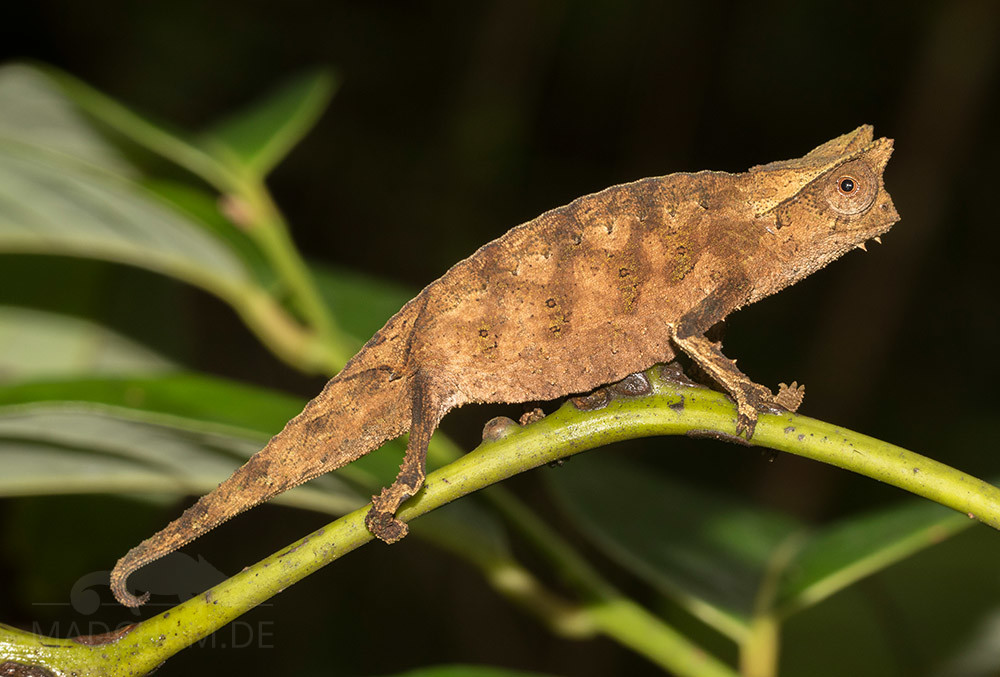 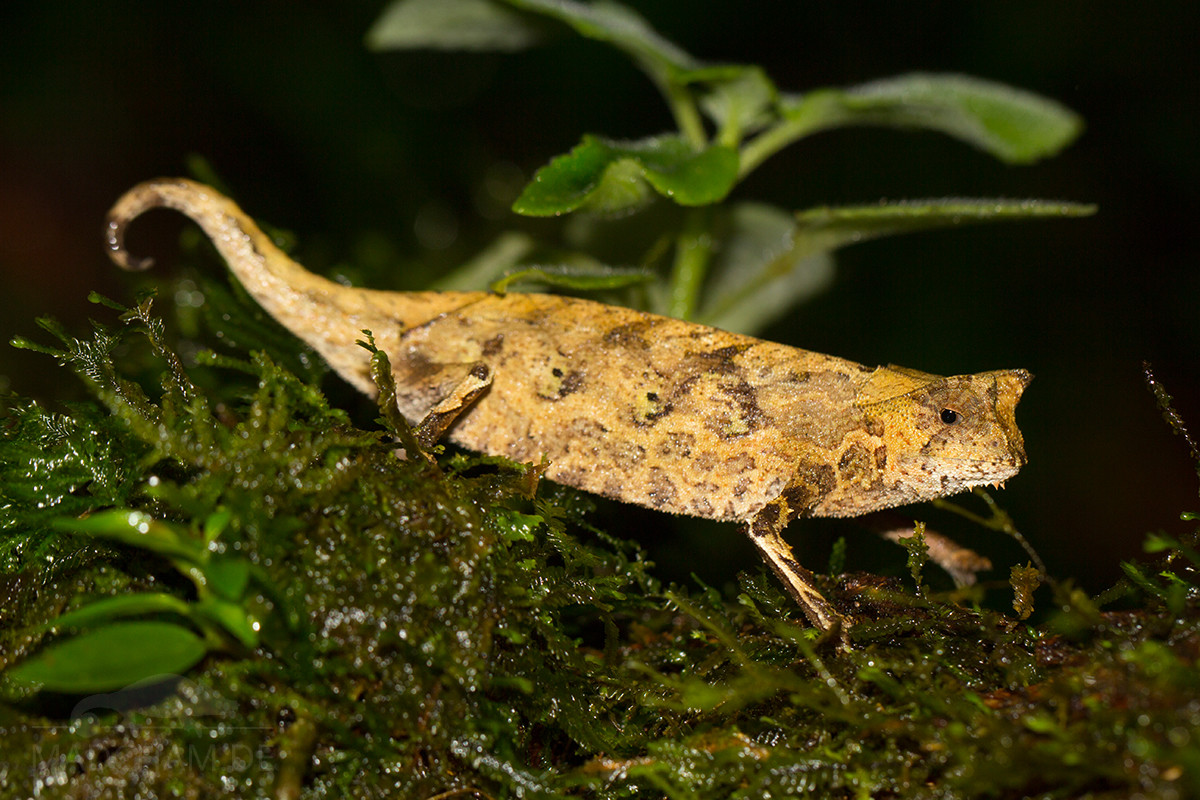 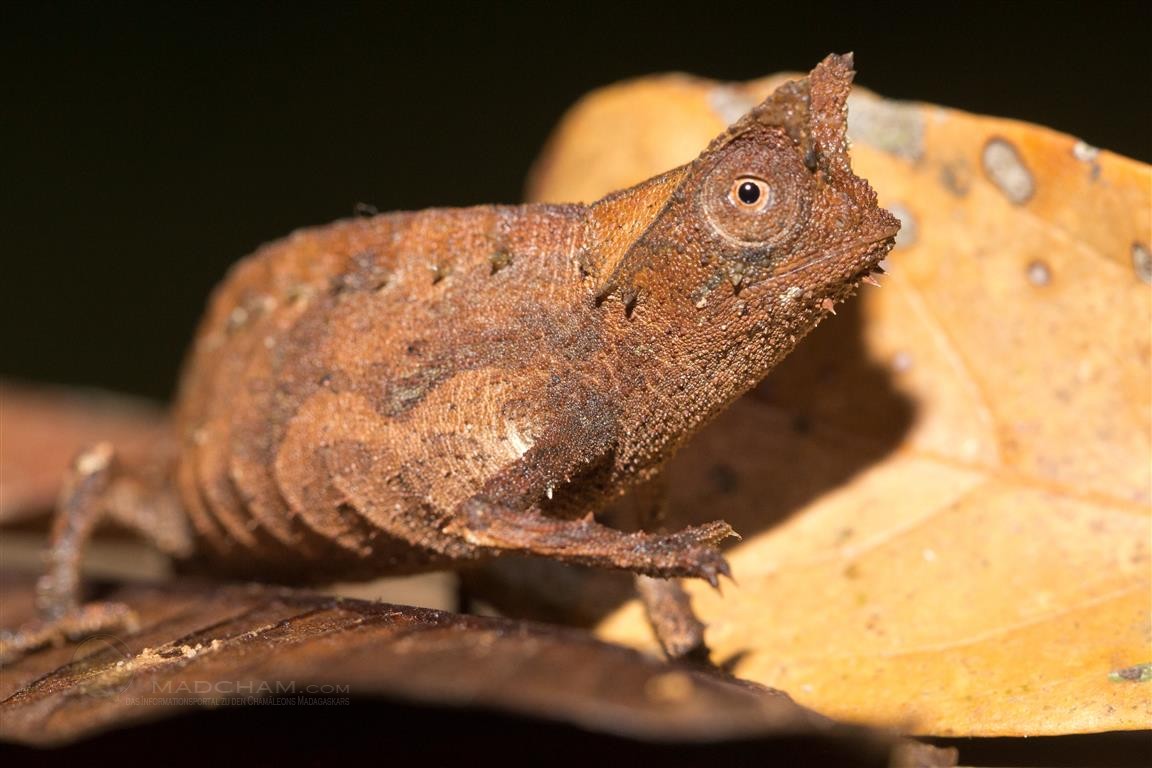 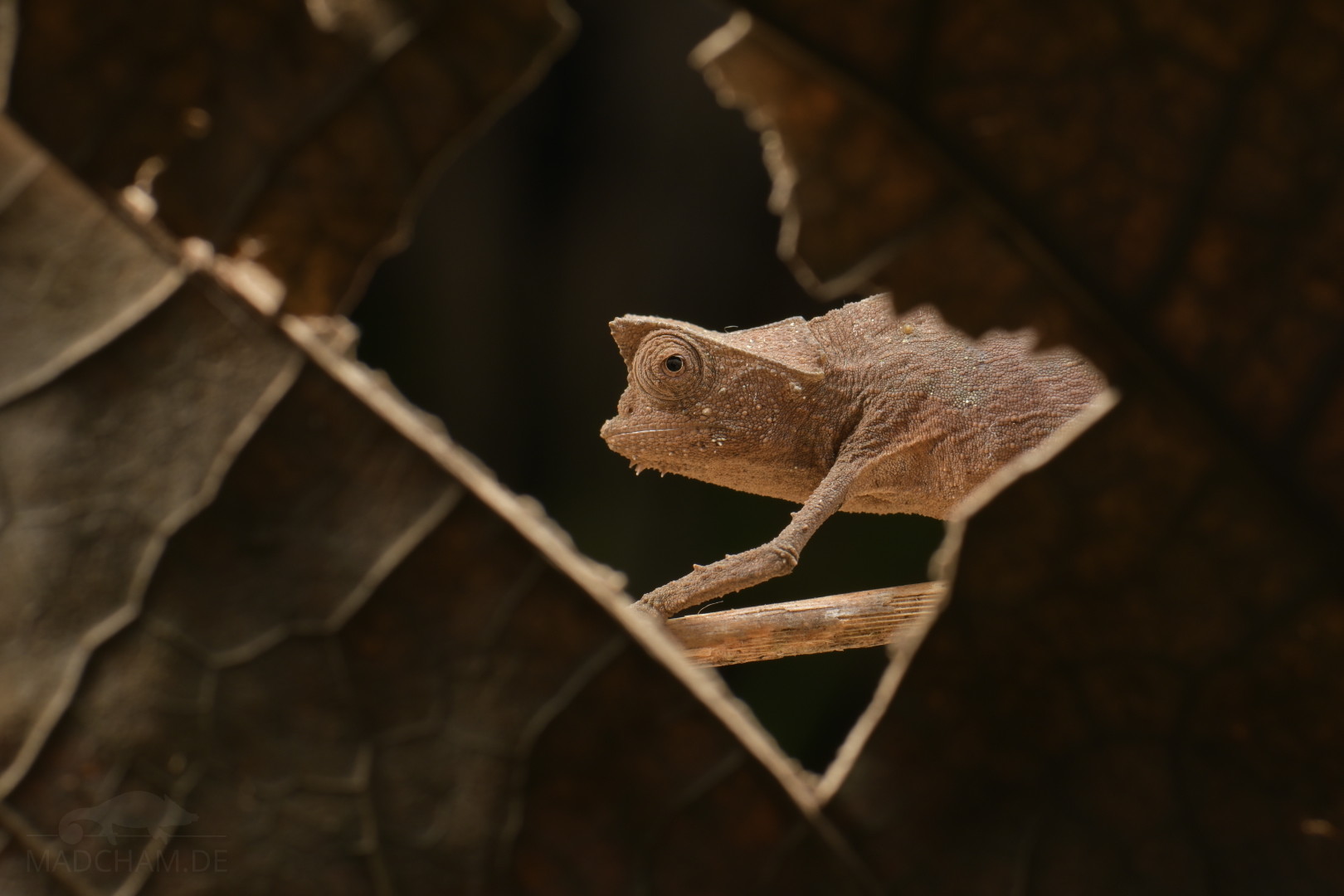 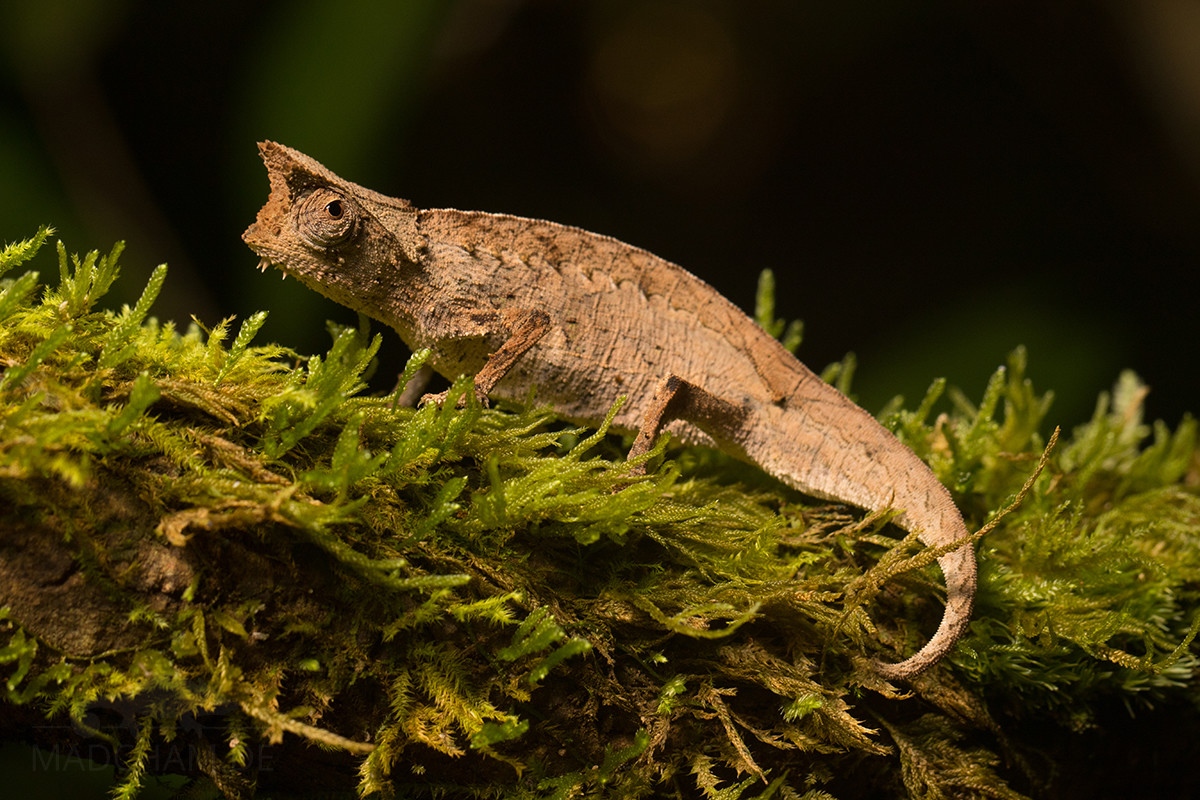 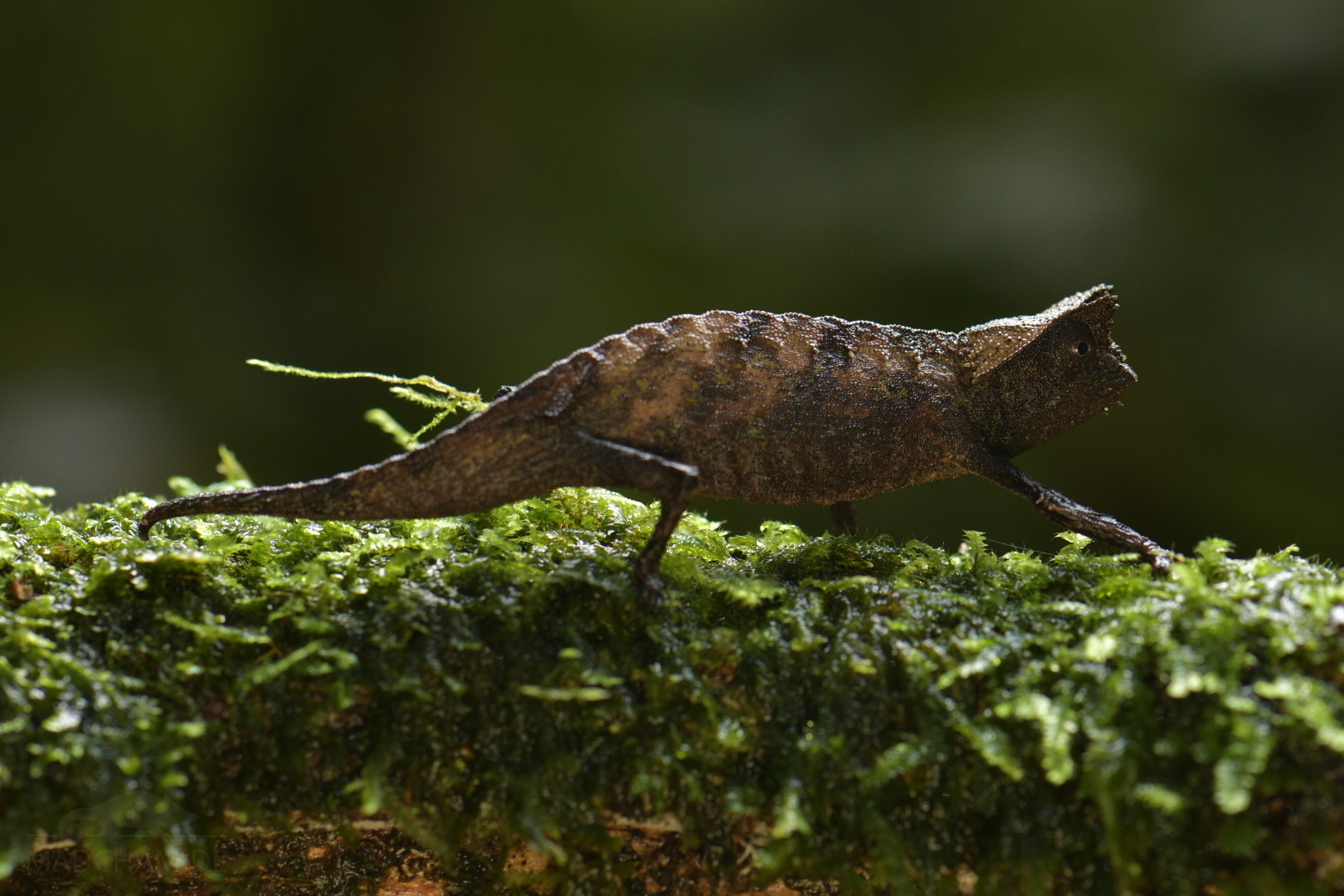 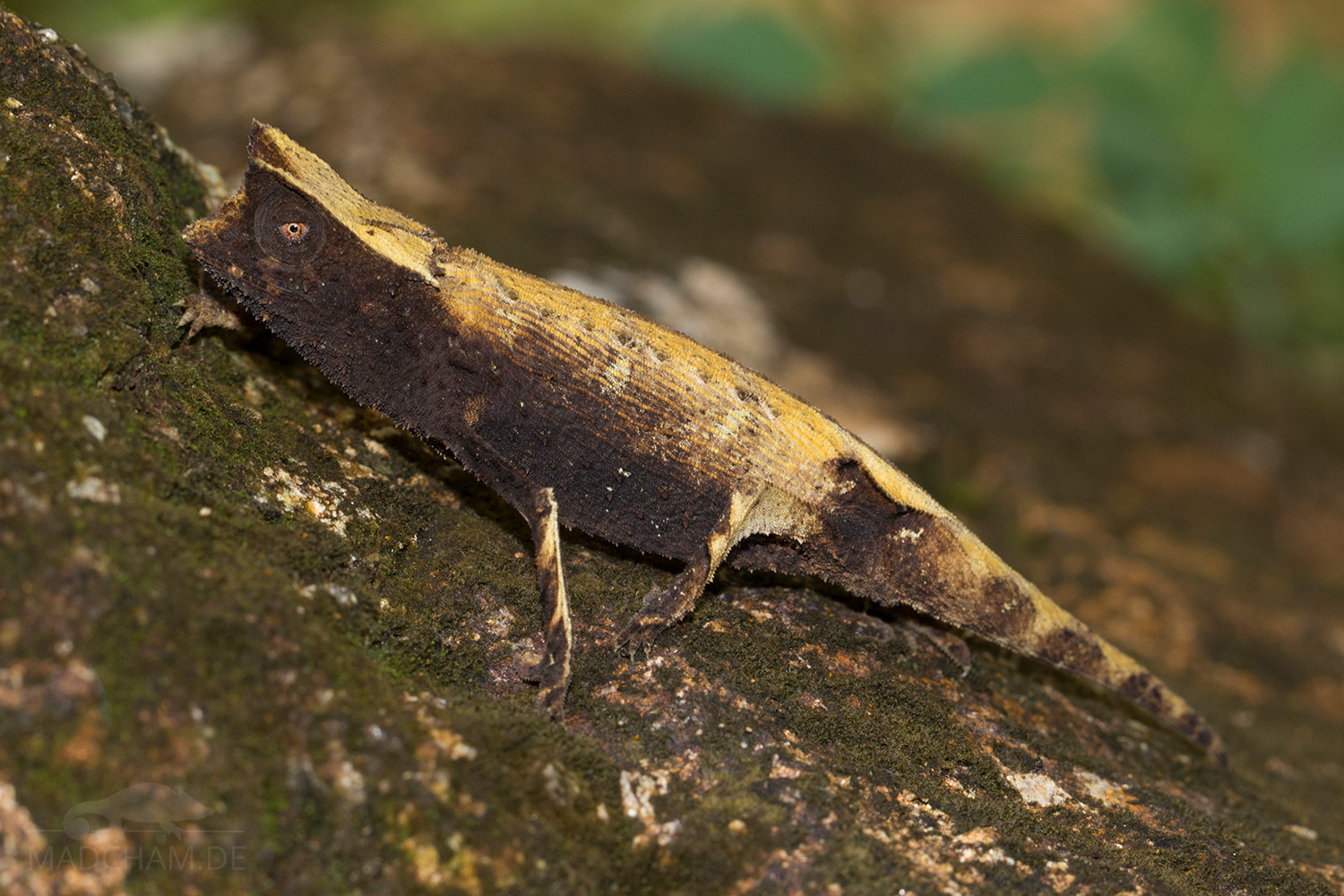 Brookesia superciliaris is a very common and widely distributed leaf chameleon species. The habitat reaches from Madagascar’s dry south along the whole east coast up to Marojejy and Masoala. They live in foliage layers, on mossy ground and in bushes and shrubs, on elevations up to 1200 m above sea level. We have found this species yet in Andasibe-Mantadia, Masoala, and Ranomafana national parks as well as in Vohimana and along the east coast. During the daytime, you can find them knee-high along the trails, sometimes even walking on branches in two meters height. Some animals we have even found climbing on tree trunks. It is one of few Brookesia species that often tend to climb up higher than just a little above the ground.

This is one of the largest leaf chameleons, it grows up to 85 to 95 mm including the tail. The scientific name derives from the large bone appendages above the eyes (from Latin supercilium = eyebrow), which is characteristic of this species. They are brown-beige colored, and several populations show different patterns – those in Ranomafana, for example, have a row of green spots on both sides. Each body side has a row of ten to eleven spiny scales, the chin has only four to six. This species has no real “pelvic shield”, but one tubercle on each side of the pelvis. Brookesia superciliaris looks very similar to Brookesia therezieni, but does not have laterovertebral tubercles on its tail.

These leaf chameleons can vibrate when threatened. Due to the wide distribution and variety among populations, it is discussed whether some of the Brookesia superciliaris might be own, yet undescribed species.

Brookesia superciliaris has been regularly bred for some years. Like many other “small brown reptiles”, it has only a small fanbase. Due to the questionable species separation, please pay attention to mate only specimens from the same region.

The following pictures show the habitat of Brookesia superciliaris in Andasibe and Ranomafana. Some are even from finding places of this species. Both rainforests are evergreen and ever humid. The habitats are strongly covered with moss, many ferns, and green undergrowth. There is a lot of humid dead wood and fallen tree trunks that are already overgrown with new plants, lichens, and moss. Brookesia superciliaris is one of few leaf chameleons that inhabits also small trees and bushes and does not only walk on the ground but climbs. They are not very picky concerning their preferred trees or shrubs. In Ranomafana, the ground is rockier than in Andasibe.

Hereinafter you can find some 360° pictures from Ranomafana. You can move inside these pictures via mouse click in all directions. If you click on the Theta logo, a new window with an enlarged view will open. You will also have the opportunity to look at the pictures in full-screen mode. Enjoy!