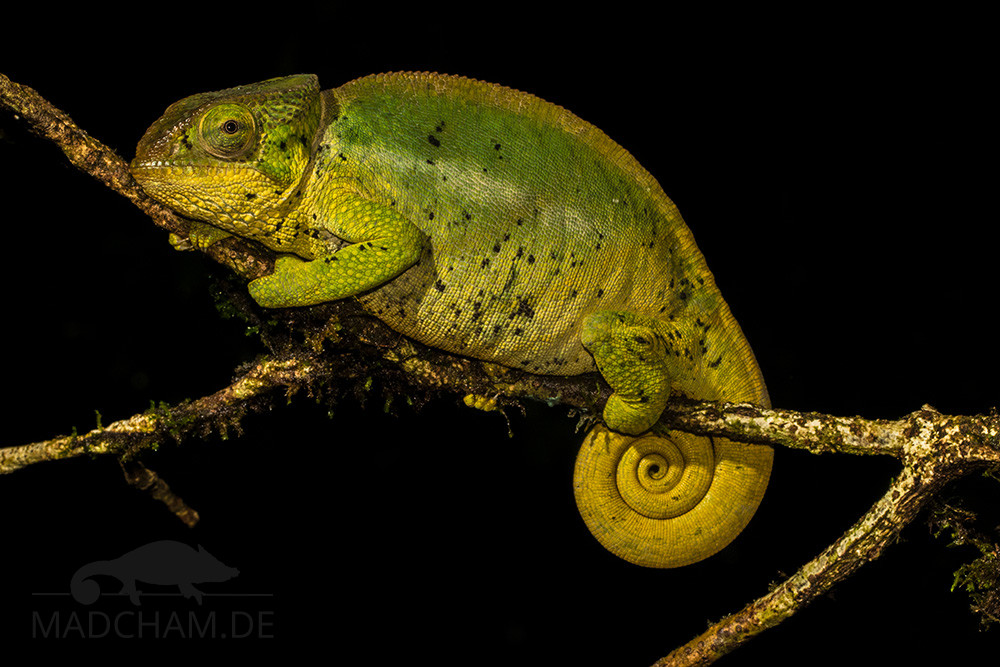 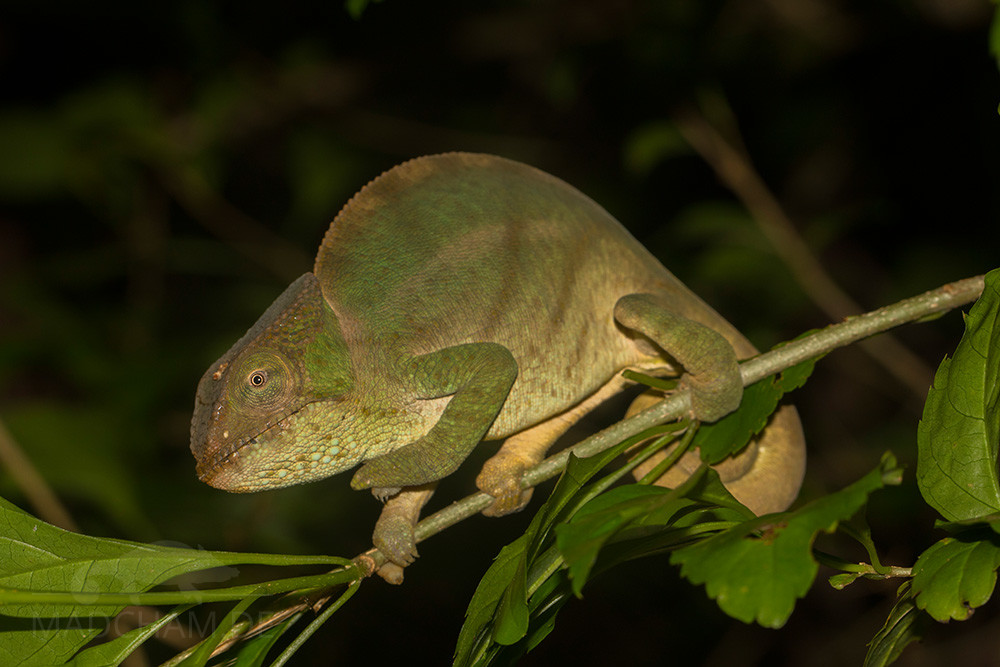 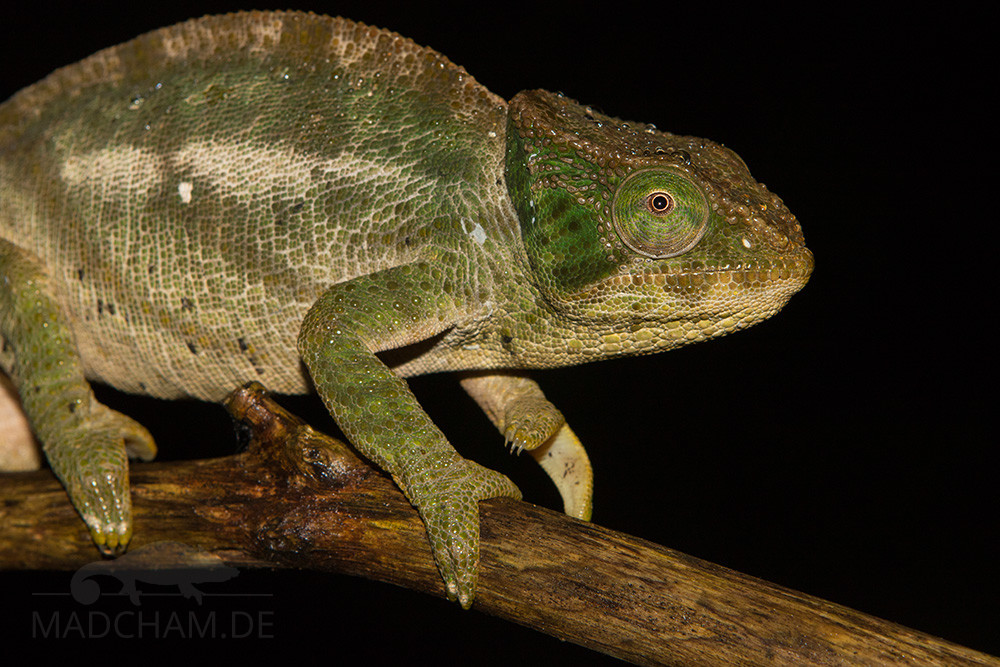 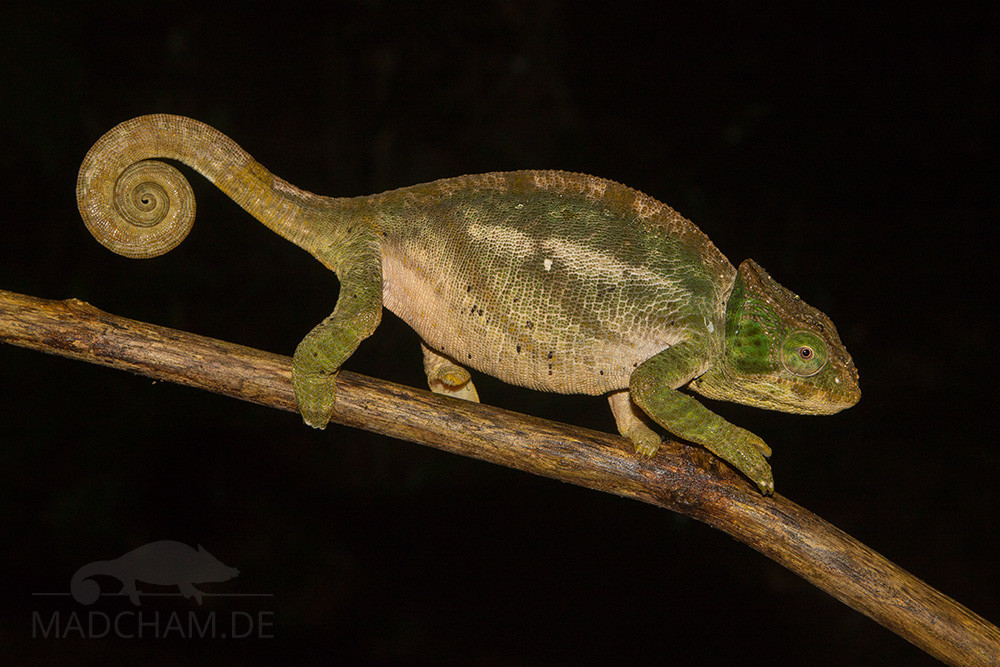 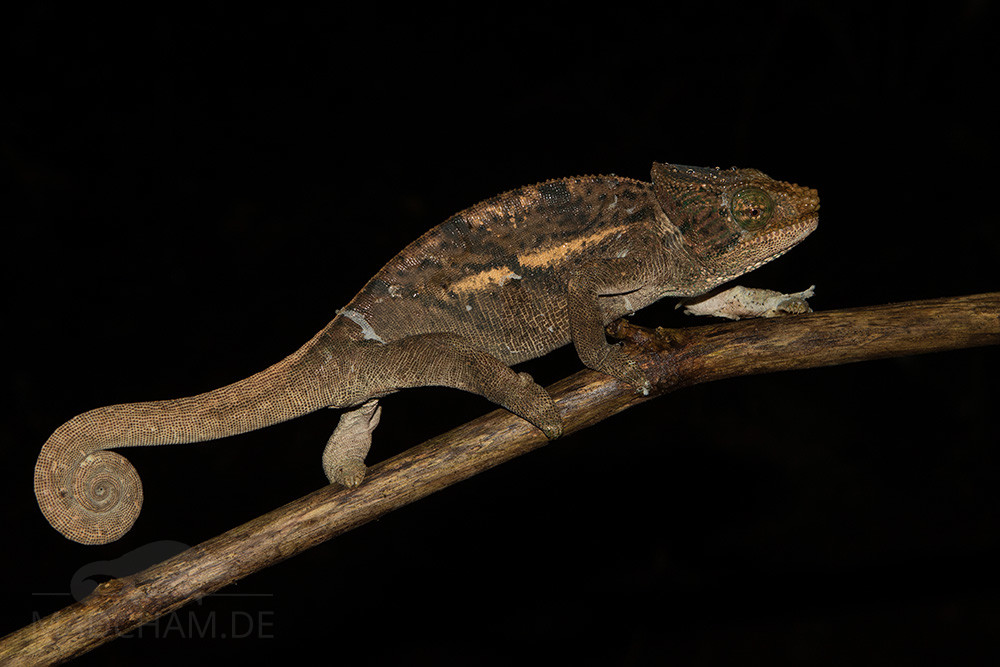 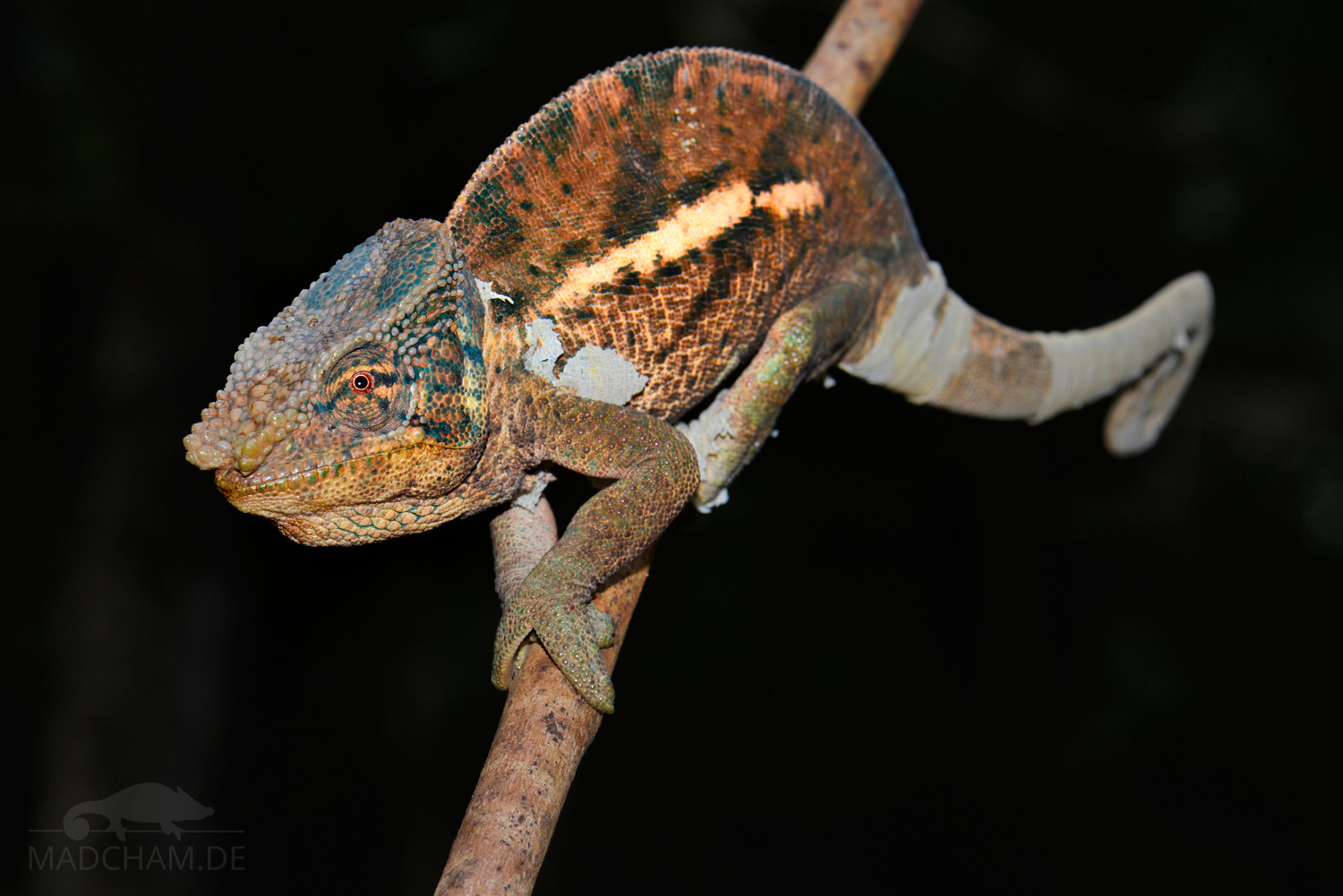 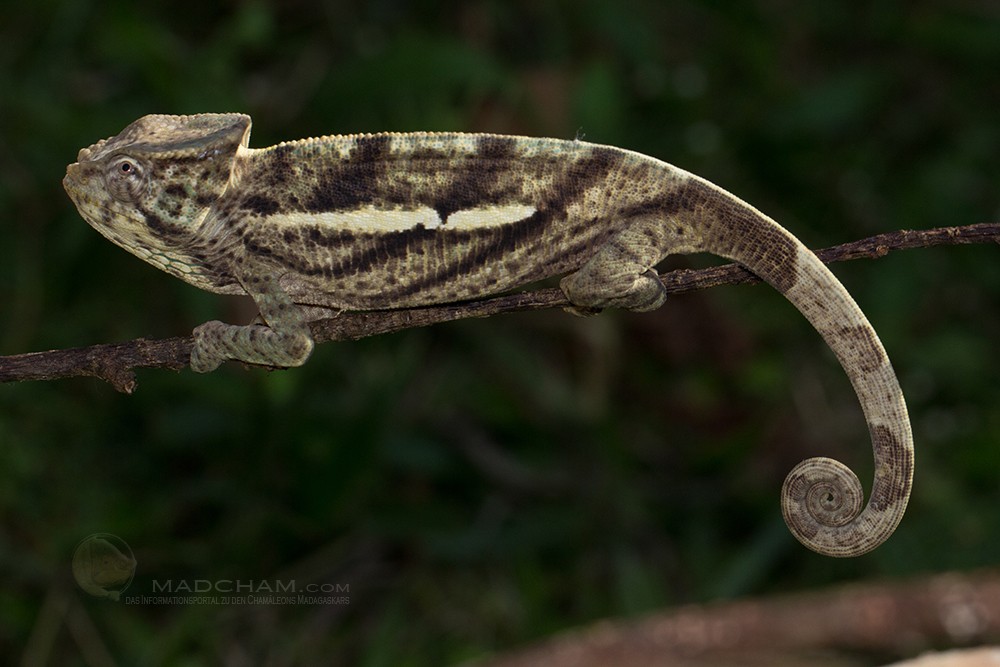 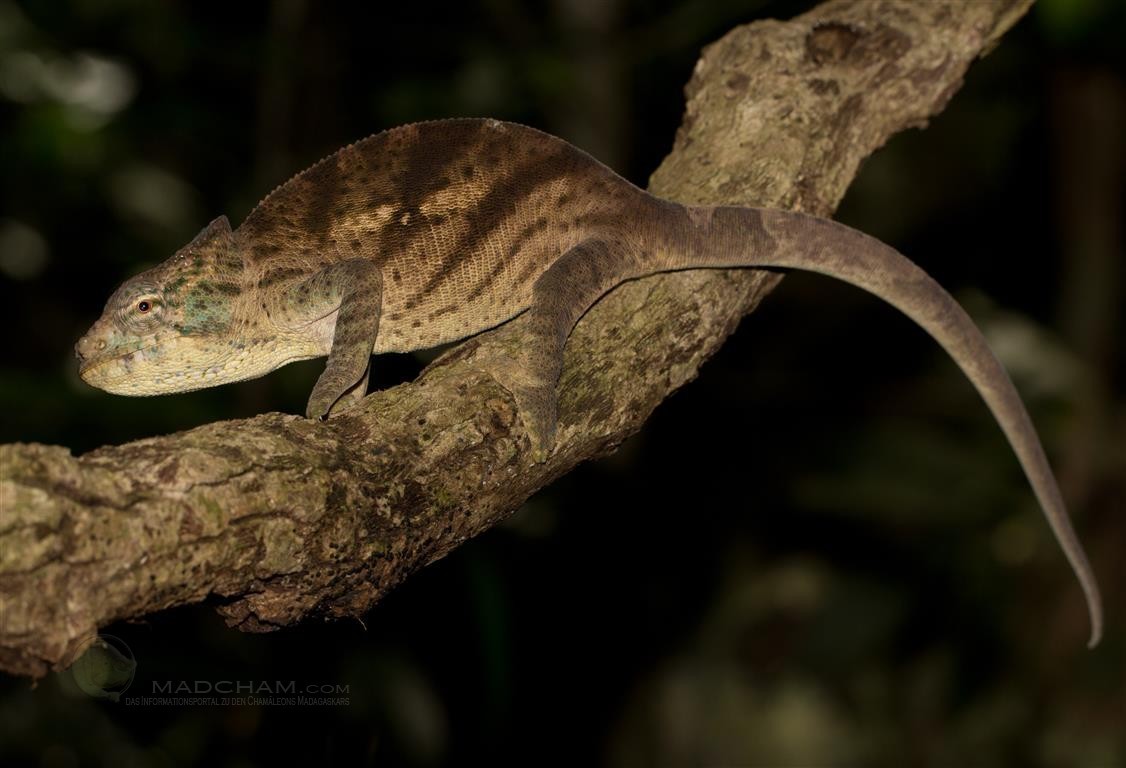 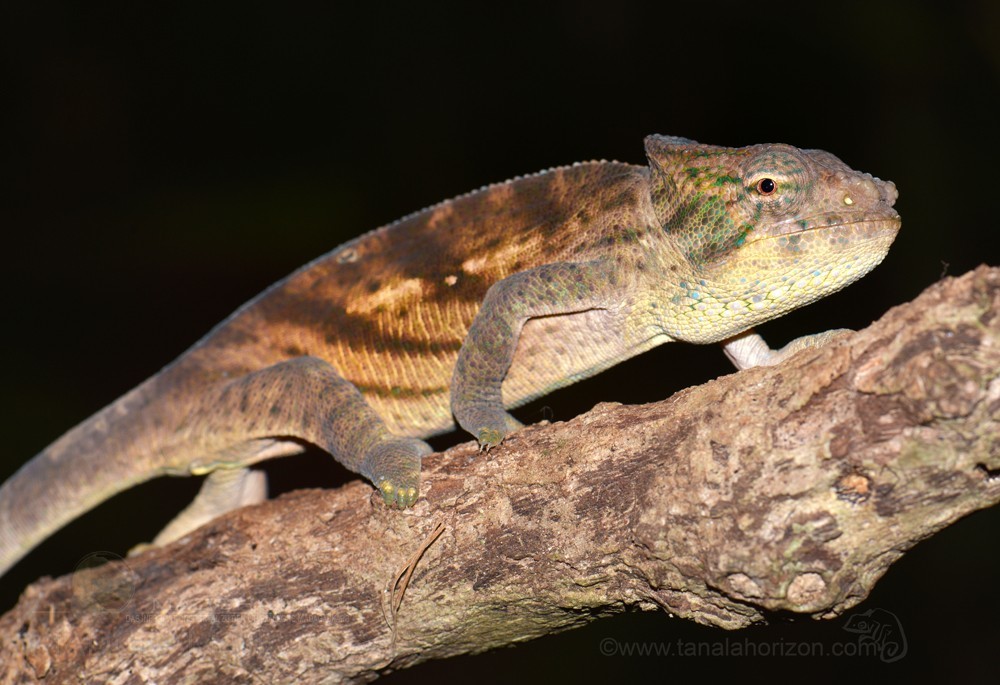 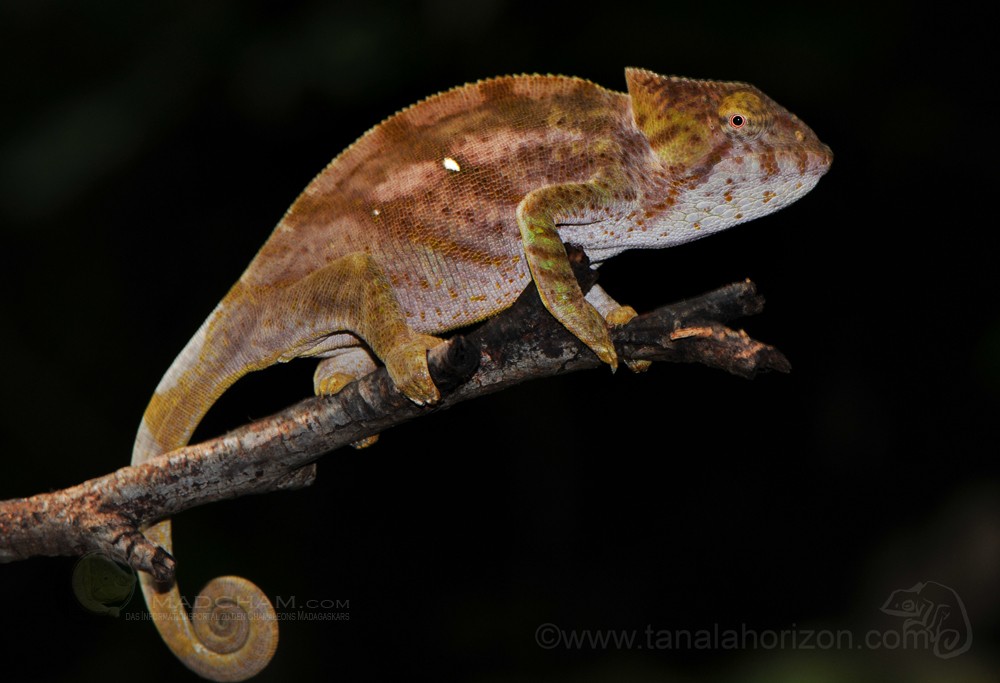 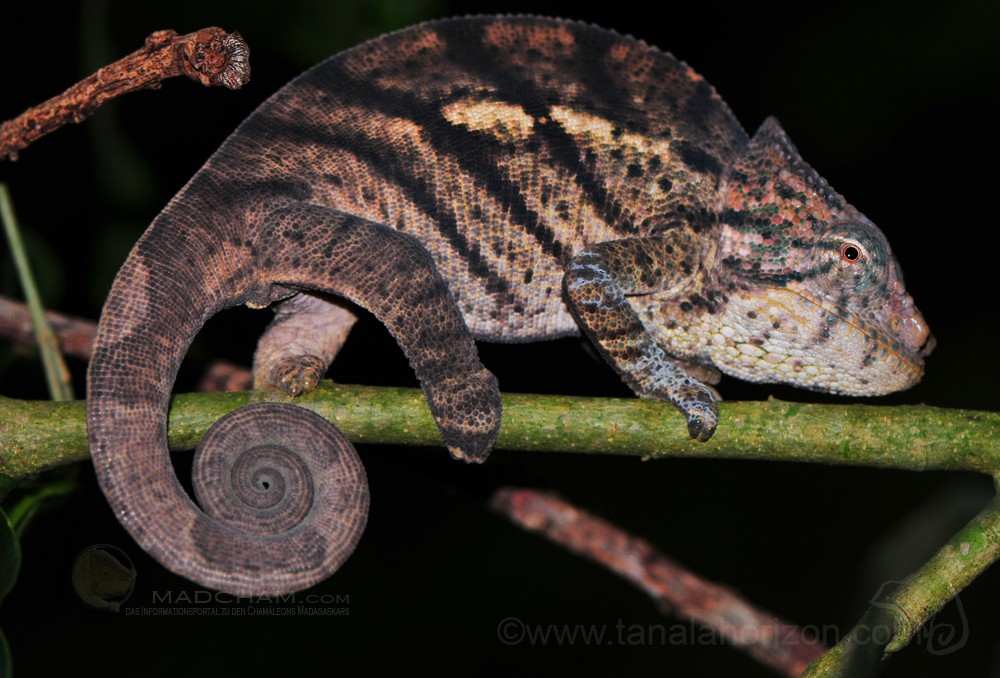 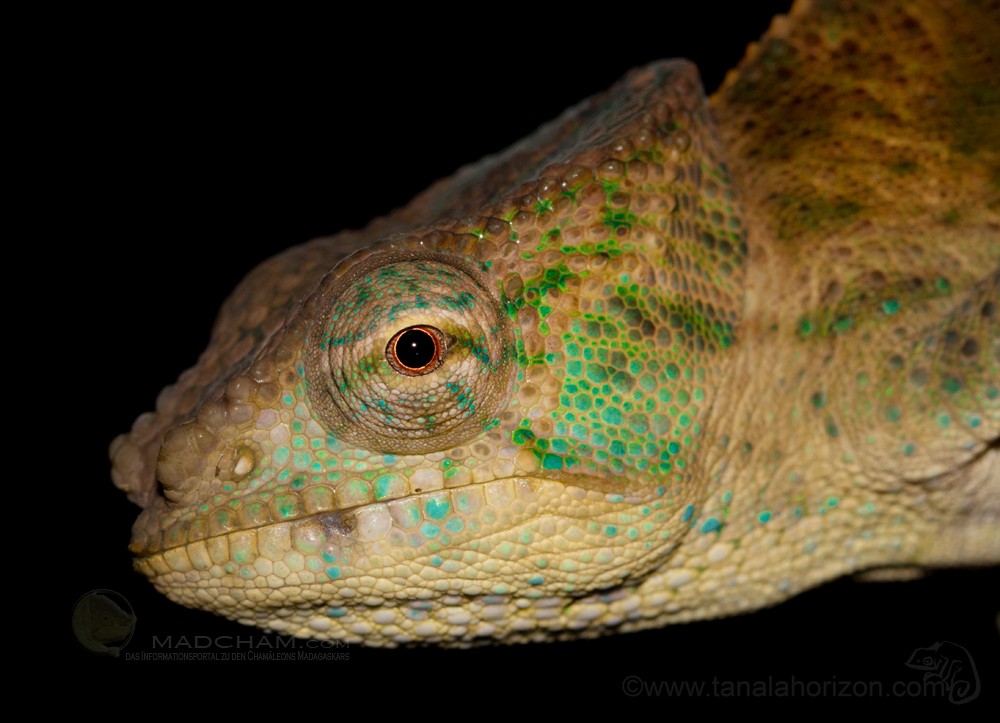 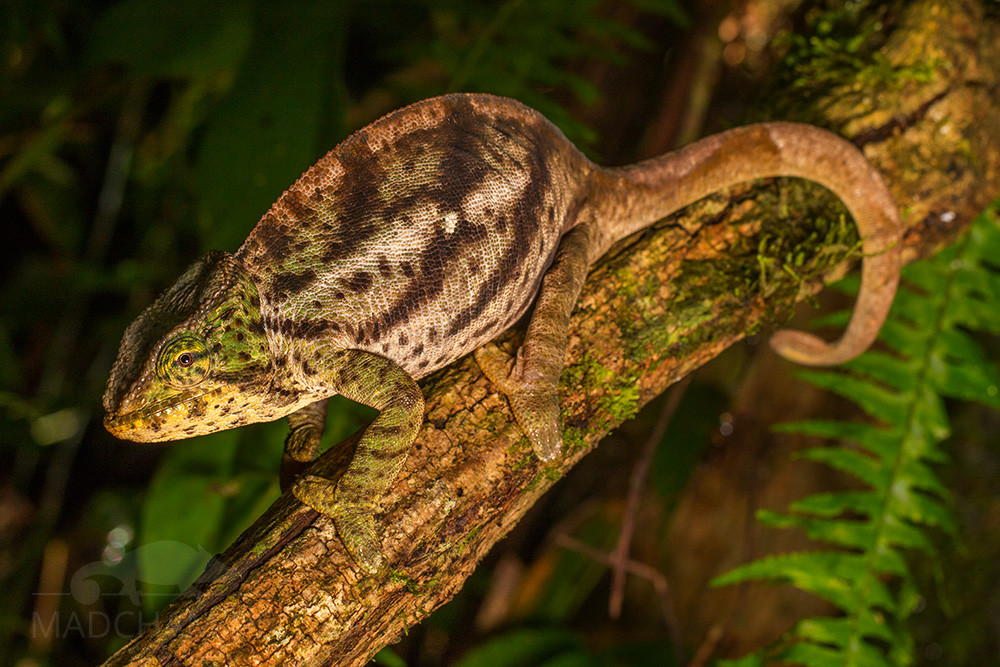 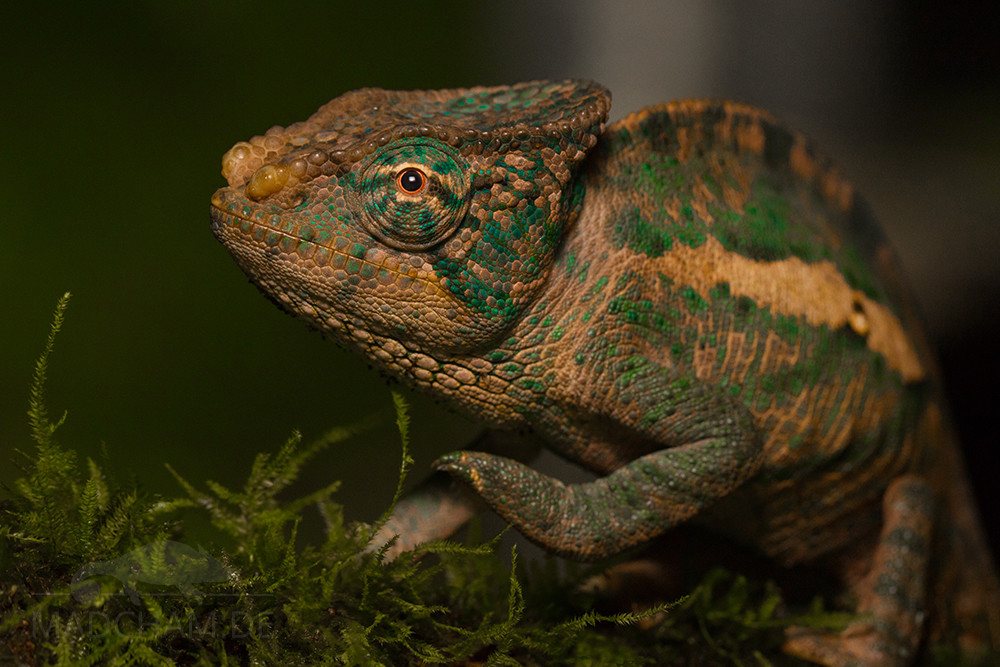 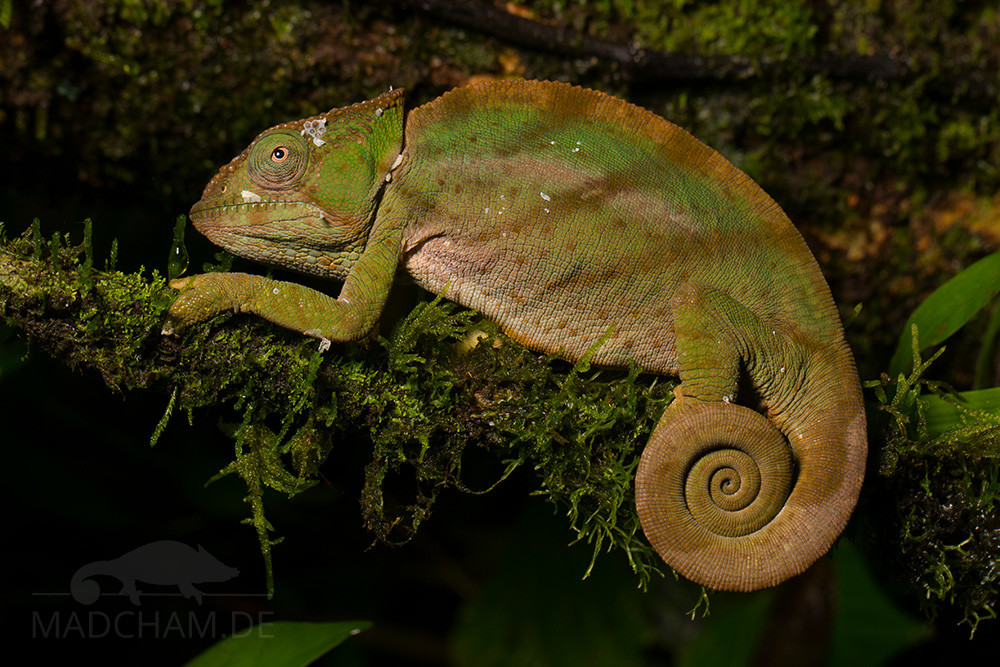 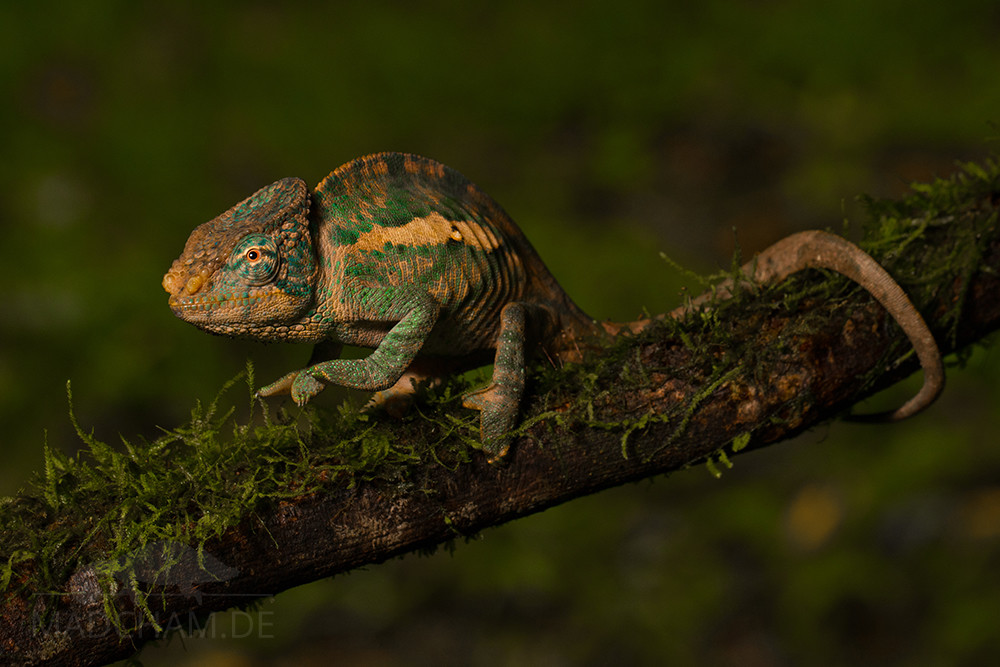 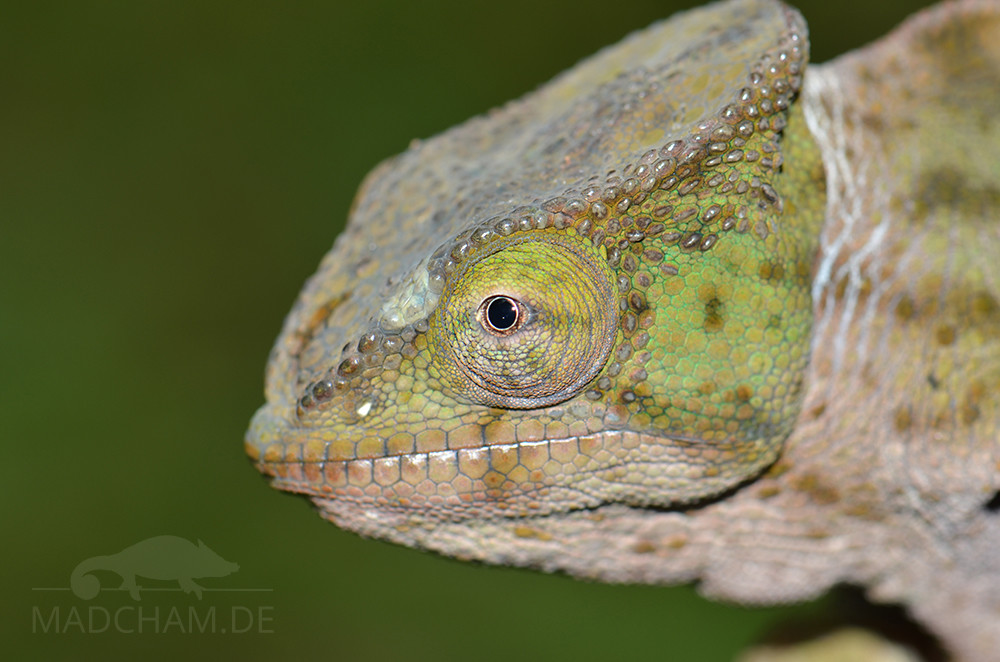 The zoologist Guy A. Ramanantsoa of the University of Antananarivo, Madagascar, named the species after its origin, the Amber Mountain. Originally described as a subspecies of Calumma oshaughnessyi, the former subspecies name ambreense was preserved when Frank Glaw from the State Zoological Collection Munich (Germany) and Miguel Vences from the Zoological Institute of the TU Braunschweig (Germany) raised the species to species status in 2007. Another species called Calumma amber was also already present.

Calumma ambreense is an inhabitant of the rainforests of Amber Mountain national park. You can only find it on elevations between 600 and 1200 meters above sea level. The species mainly live on trees between one and a half until ten meters in height. They prefer very high, slender trees overgrown with ferns and moss (like everything in Amber Mountain). Astonishingly, we have found some of these also around the campground of Amber Mountain in pine trees. In the night, these chameleons are – like almost all species – brighter coloured, and thus easy to find with a torch in big trees. Even then they mostly sit well above 2 m height. During the daytime, it is more difficult to find this species – although they are rather big, they are well camouflaged. Young Calumma ambreense of few days of age often still sleep on very thin plants very close to the ground.

These chameleons count among the large chameleon species due to their size from 40 to 55 cm. Like in all Calumma species, the helmet is rather high, and they have very small, hardly recognizable occipital lobes. There is hardly a dorsal and ventral ridge, and there are no enlarged scales. Males have a greyish-green color with a broad, white lateral stripe and dark bands, and short nose appendages. The females lack any nose appendage but are greener and sometimes yellowish colored. Both genders may have bright green and blue patterns on the head.

We have experienced this species to be very gentle and calm in the wilderness – never a Calumma ambreense hissed at us. However, they are usually less relaxed when handled than for example Calumma parsonii which has a similar size.

Habitat:
The following pictures show the habitat of Calumma ambreense in Amber Mountain. Some are even from finding places of this species. Amber Mountain is an impressing rainforest full of old tree giants with meter-sized nest ferns. Everything is full of lianas, moss, and lichens. Calumma amber is mostly climbing on large trees, and partially even inhabits introduced pines.

Hereinafter you can find some 360° pictures from Amber Mountain. You can move inside these pictures via mouse click in all directions. If you click on the Theta logo, a new window with an enlarged view will open. You will also have the opportunity to look at the pictures in full-screen mode. Enjoy!