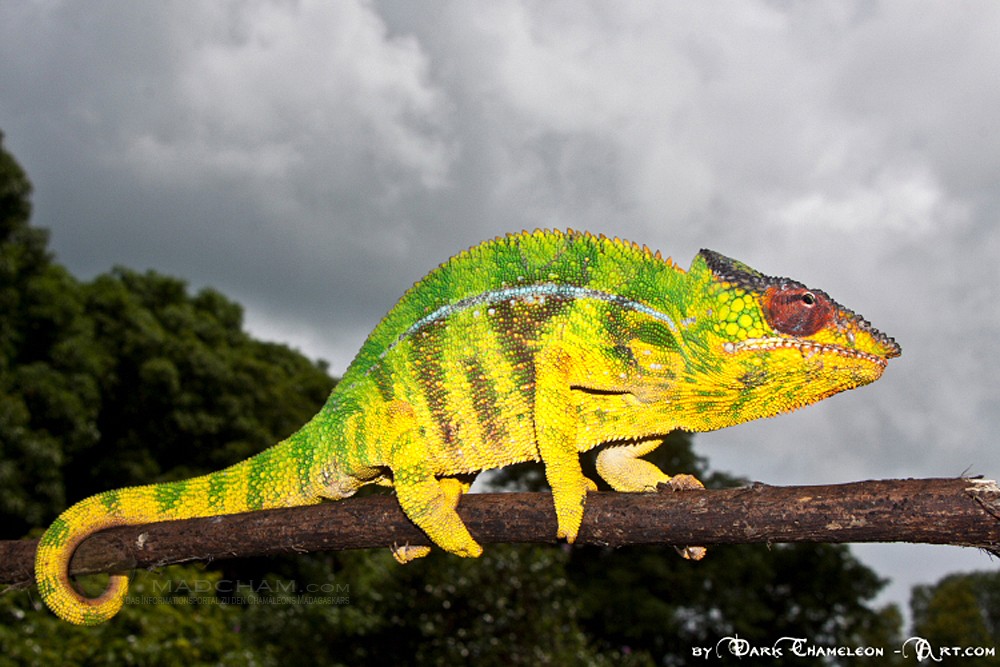 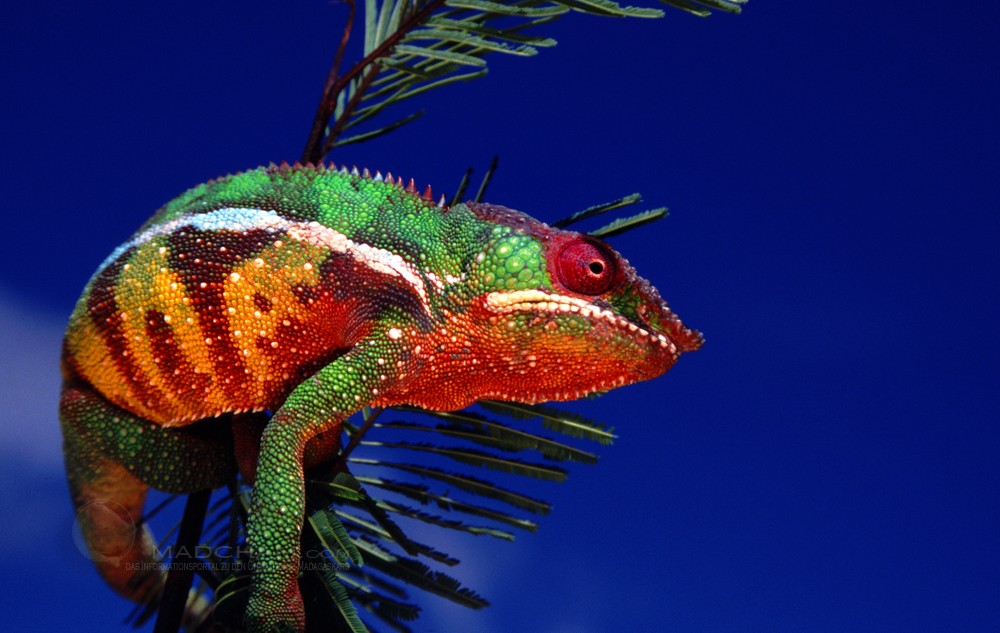 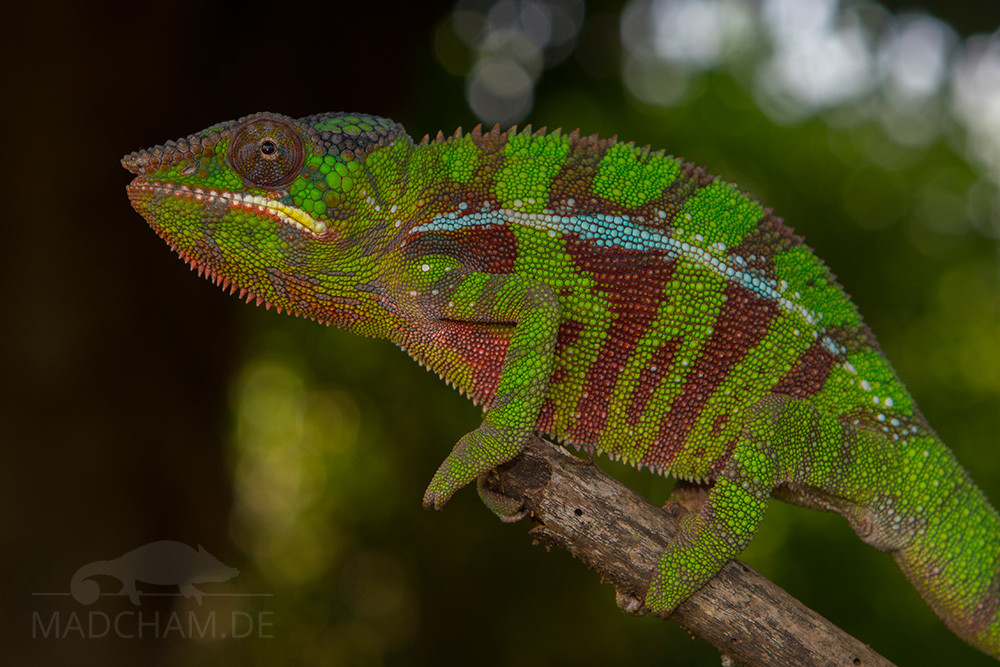 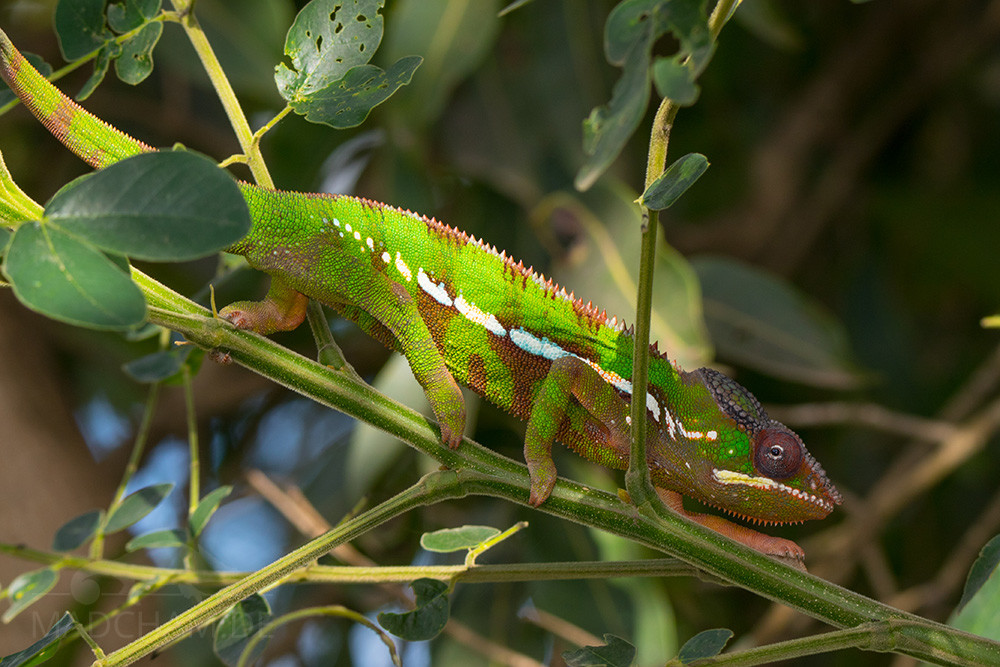 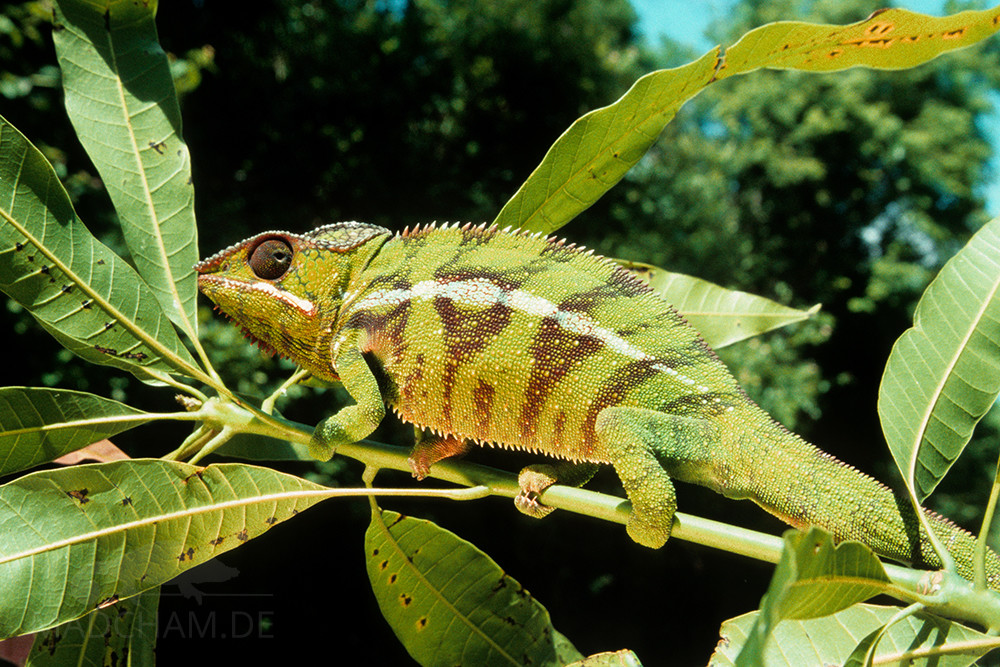 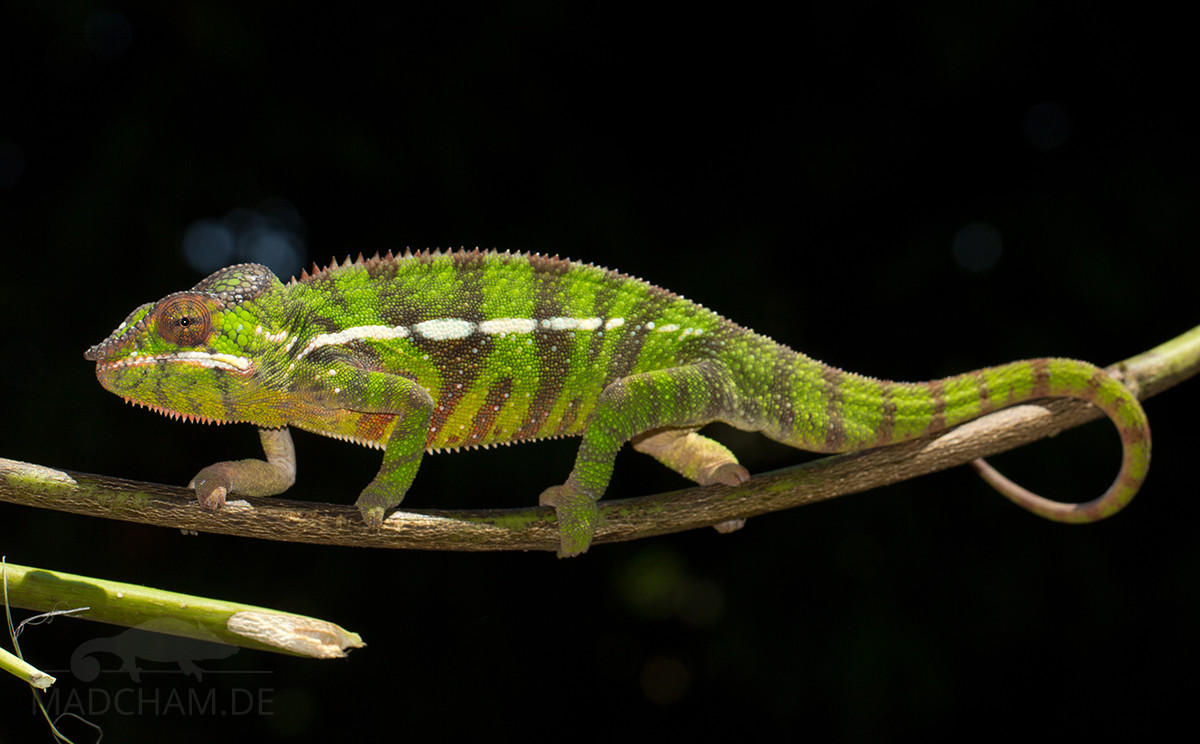 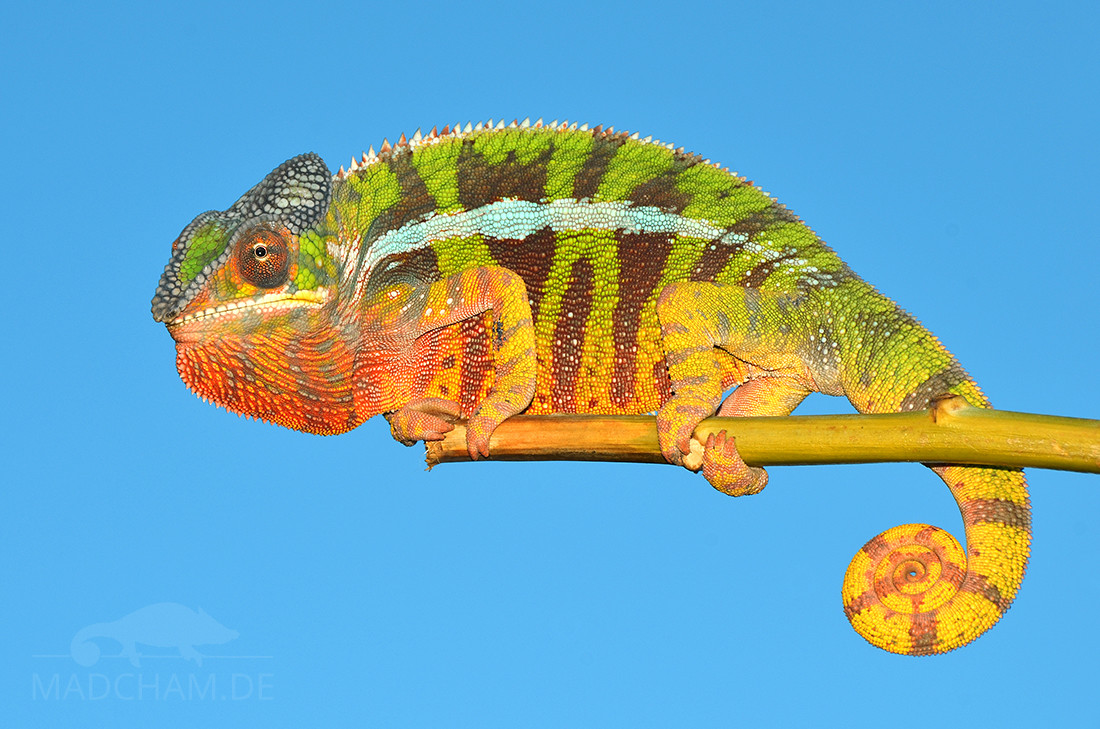 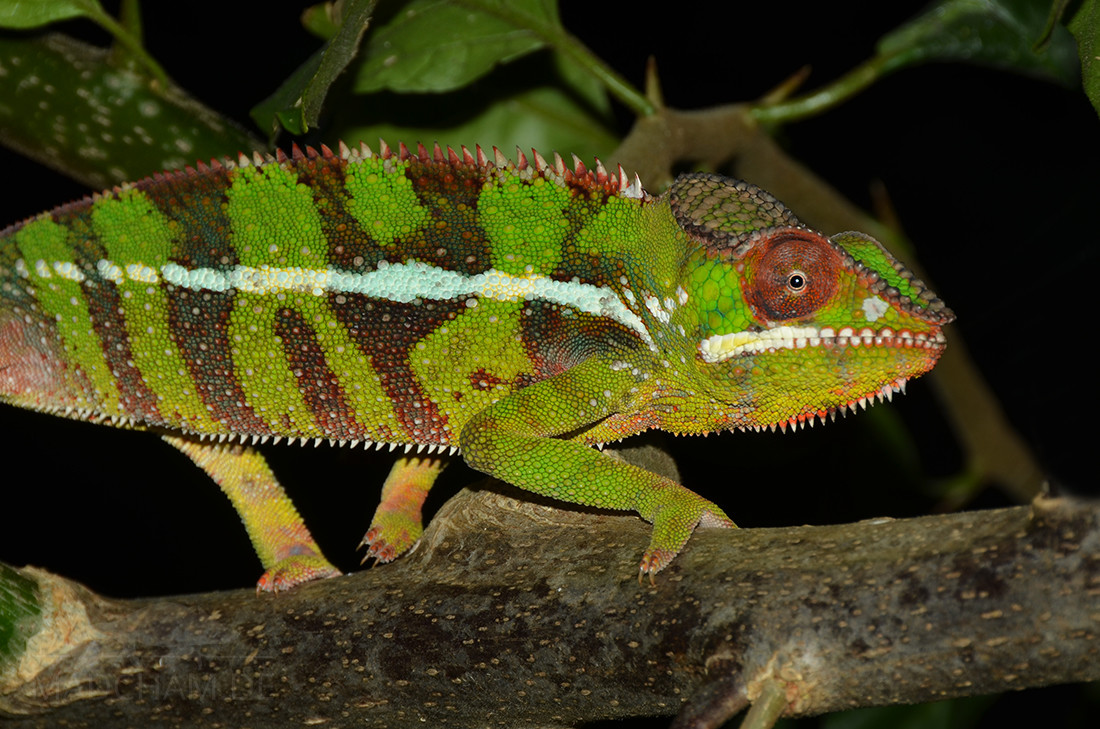 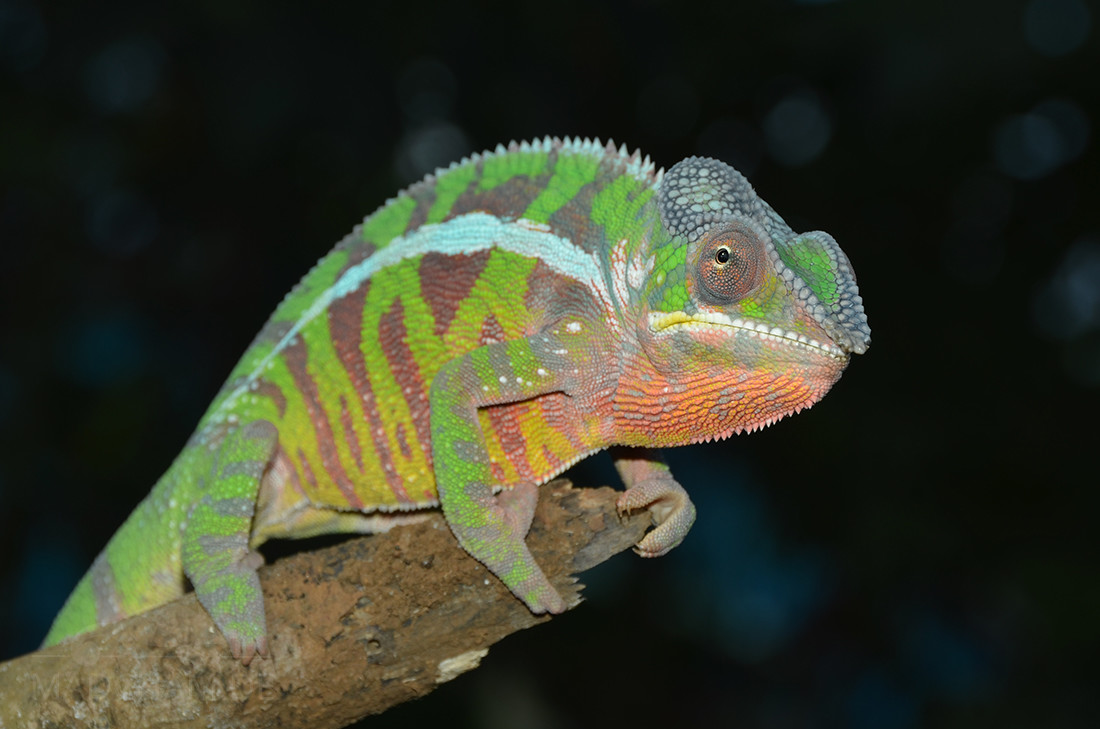 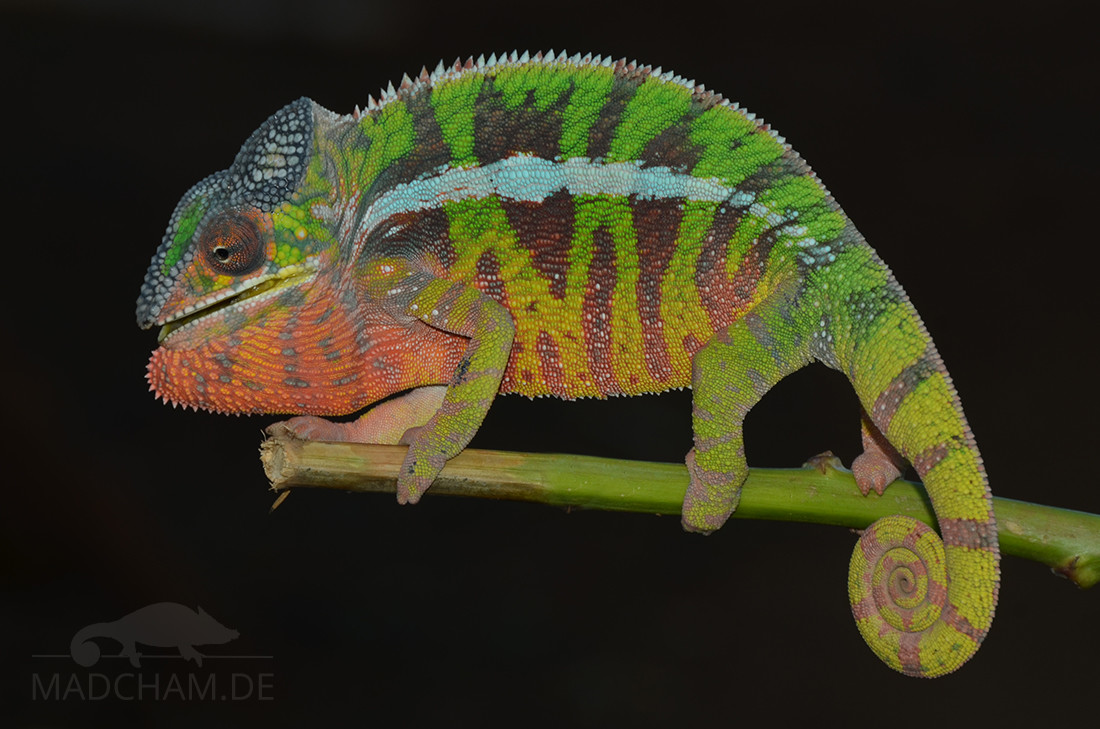 Distribution of the local form Antsiranana:

Antsiranana (French Diego Suarez) is located in north Madagascar on a large bay and is the capital of the eponymic region. With about 80.000 inhabitants and the second largest harbor of Madagascar, Antsiranana is a big city and still strongly influenced by the French colonial style. National road RN 6 leads directly to Antsiranana, but the city also has a working small airport. In Antsiranana itself, you cannot find panther chameleons, but you can make a find in the outer areas with secondary vegetation, dry forests, savannah-like areas, and simple wooden huts. The distribution area of this local form lacks a lot of natural barriers, so it extends until nearby Ambohitra (Joffreville) where the entry of Amber Mountain national park ist.

This local form has no high color fidelity and thus shows various colorations. The ground color is mostly yellow with greenish accents and wine red cross bands. Older specimen often have red to orange accents on throat and head. 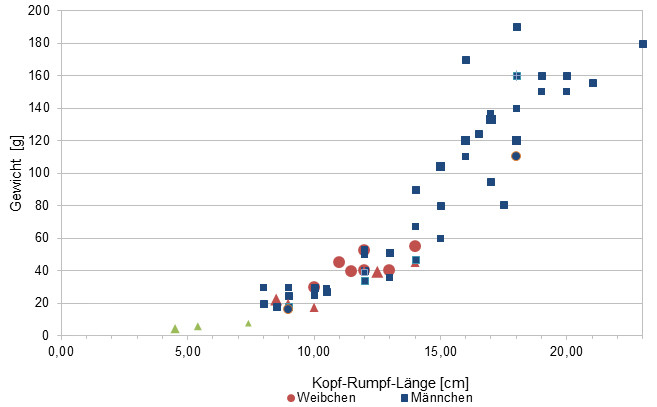 Since 2015, we measure the weights of most chameleons that we find in Madagascar, of course only if practicable with calm animals (and working scales). Over the long term, we want to get an average weight in proportion to the snout-vent-length (measured from the tip of the nose to the cloaca) from a large number of measurements for each Madagascan chameleon species. It is important to know that weights were all measured at the end of the rainy season when the chameleons have been having the highest food supply of the year. So our table may show the maximum weights of chameleons in Madagascar. Triangular symbols in females mean not pregnant, spherical symbols mean pregnant. Despite our earlier assumptions, it has turned out that in Furcifer pardalis, there seem to be no significant differences in SVL-weight-ratio between the different local forms.

In Antsiranana, climate differs considerably between dry and rainy season. Generally, it is very warm throughout the year in Madagascar's northernmost region, with day temperatures around 25°C and higher. In sunny places, it is almost always warmer than 30°C.

During rainy season, humidity raises due to almost daily intensive rain. December to February is cyclone season which may bring heavy storms and rainfalls into the region. From April to October, it is dry season in Antsiranana. There is only few precipitation, and the savanna like areas around the city dry up partially. But the region does not stay completely without rain even during dry season, so most trees remain green and in leaf. Sometimes, temperatures in the night in dry season may drop down to 20°C. Unfortunately, we have no ground temperatures for Antsiranana available yet.

The habitat around the region of Diego Suarez is very diverse. You cannot find panther chameleons in the savannas, but everywhere in open landscapes with bushes, some trees, and palms. Even inside hotel ground along the coast, we’ve seen Furcifer pardalis. In the direction of Amber Mountain, the habitat changes and the climate becomes cooler. Vegetation is lusher and greener. The ground close to the coast is sandy, in direction of Amber Mountain it’s more earth.