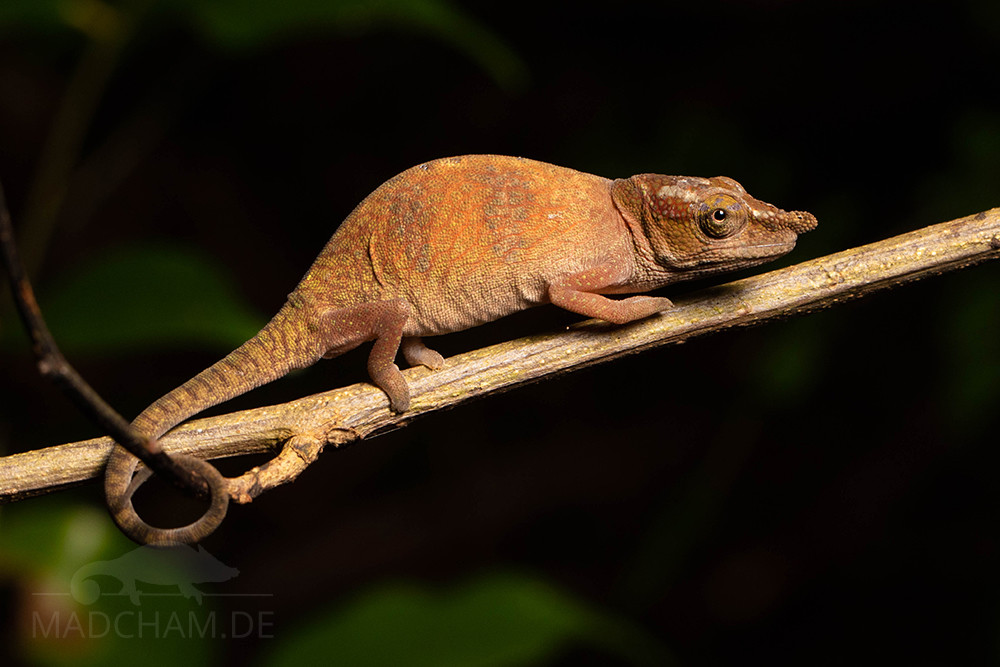 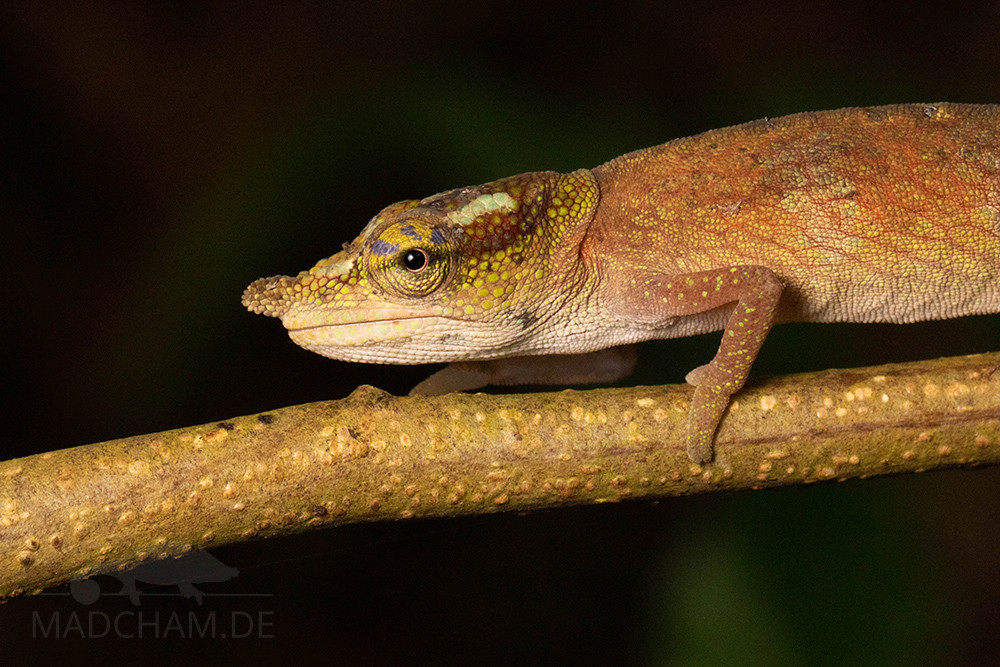 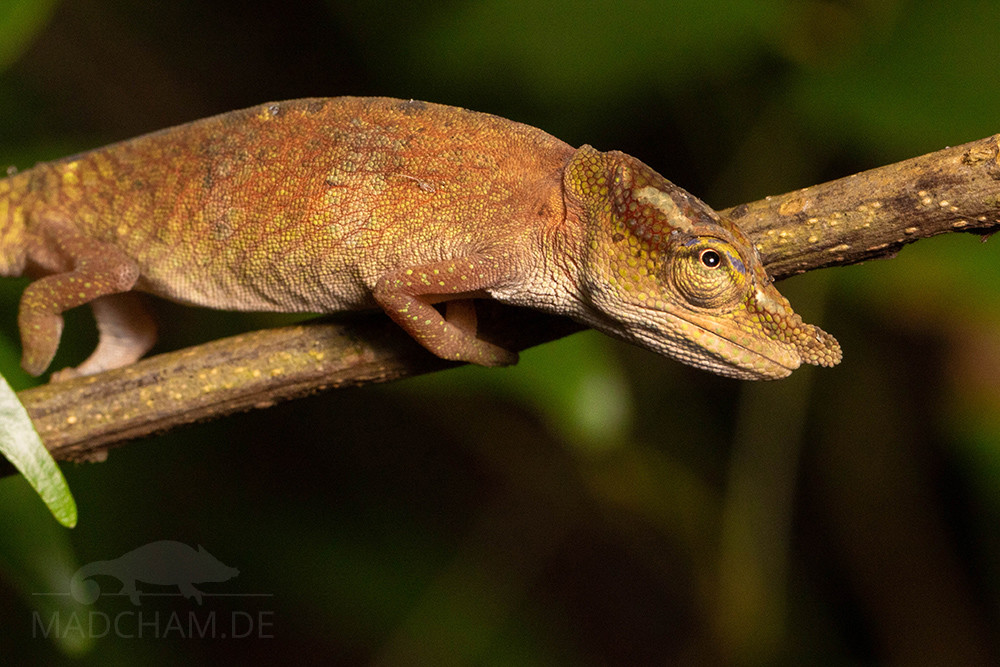 The Belgian zoologist George Alber Boulenger, at that time working at the Natural History Museum in London (Great Britain), named this chameleon species in honor of the German paleontologist Oskar Böttger. Böttger worked mainly at the Senckenberg Museum in Francfort (Germany) and contributed significantly to the expansion of the museum’s herpetological research institute.

Calumma boettgeri can be found on some islands in the northwest of Madagascar as well as the offshore mainland. It is found in the remaining rainforests of Manongarivo and in the Lokobe National Park on the island of Nosy Be. On the island of Nosy Ambariovato, better known under its nickname Nosy Komba (“Island of the Lemurs”), Calumma boettgeri also lives in very dense secondary vegetation on the edge of original rainforest remains. It can be assumed that Calumma boettgeri could also be found on other islands in the area as well as in the few forest remnants along the river Sambirano or even further south in Sahamalaza. Outside closed forests, we have not yet been able to find this species.

Size comparison of an adult Calumma boettgeri on a human hand

This chameleon species belongs to the small chameleons with a total length of about 8 to 10 cm. Typical for Calumma boettgeri are the occipital lobes, which are divided into two sides only by a slight indentation when viewed from above. In addition, both sexes have a roundish-oval, soft rostral appendage. The casque is flat or only weakly pronounced. Both sexes carry neither a parietal nor gular or ventral crest. In terms of color, these small chameleons are rather unimpressive. The males are yellow or green-brown, the females are beige to slightly orange with green or light blue scales on the arms and legs. In the head and belly area, the animals can appear almost white. On the head, Calumma boettgeri shows under stress a bright pattern similar to the one in Calumma juliae. Many animals wear a dark line that extends from the nose to the eyelids and the occipital lobes.

For many years, several independent species were classified as Calumma boettgeri until their description, for example, Calumma linotum from the Amber Mountain. This so-called boettgeri clade includes small chameleons on Madagascar, which all show occipital lobes. Due to the unclear situation over decades, there are still countless photos on the net, on which animals are listed as Calumma boettgeri, which do not belong to this species at all according to the current state of knowledge.

The climate on the islands off Madagascar's northwest coast is very warm all year round. Temperatures above 30°C occur regularly. At night the temperatures in the rainy season fall only slightly below 25°C, during the dry season they drop considerably lower down to 15°C, and even lower on a daily basis.

During the rainy season it rains very abundantly and a lot. From April to October it stays mostly dry and sunny on the islands, but still rains from time to time. Therefore it never gets completely dry on the islands and the vegetation remains green all year round. 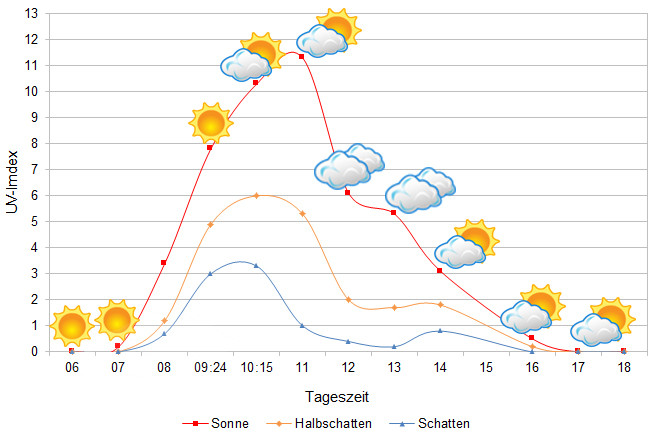 Unfortunately there are no soil temperatures available for Nosy Komba yet.

The following photos show parts of the habitat of Calumma boettgeri on Nosy Komba and Nosy Be. Some of them are directly from finding places of the species. On Nosy Be, the animals live in the last remaining rainforest, Lokobe. This consists of countless jungle giants with dense undergrowth and many rocks and rock formations in between. On Nosy Komba the species also occurs in secondary vegetation. It prefers small-leafed, extremely dense and knotty habitats. The soil on both islands is not pure sand, but rather a mixture of earth and sand.

Below you will find some 360° pictures of Nosy Komba. With the mouse, you can turn in all directions. If you click on the Theta logo, the pictures will open in a separate window in an enlarged view. There you also have the possibility to view the pictures in full-screen mode. Have fun while watching it!