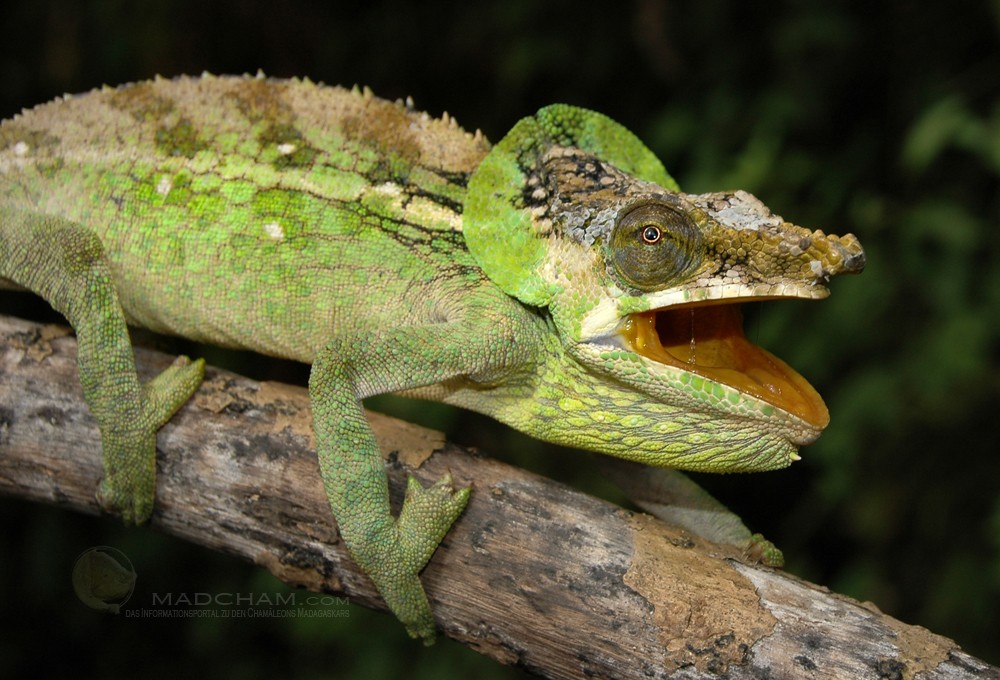 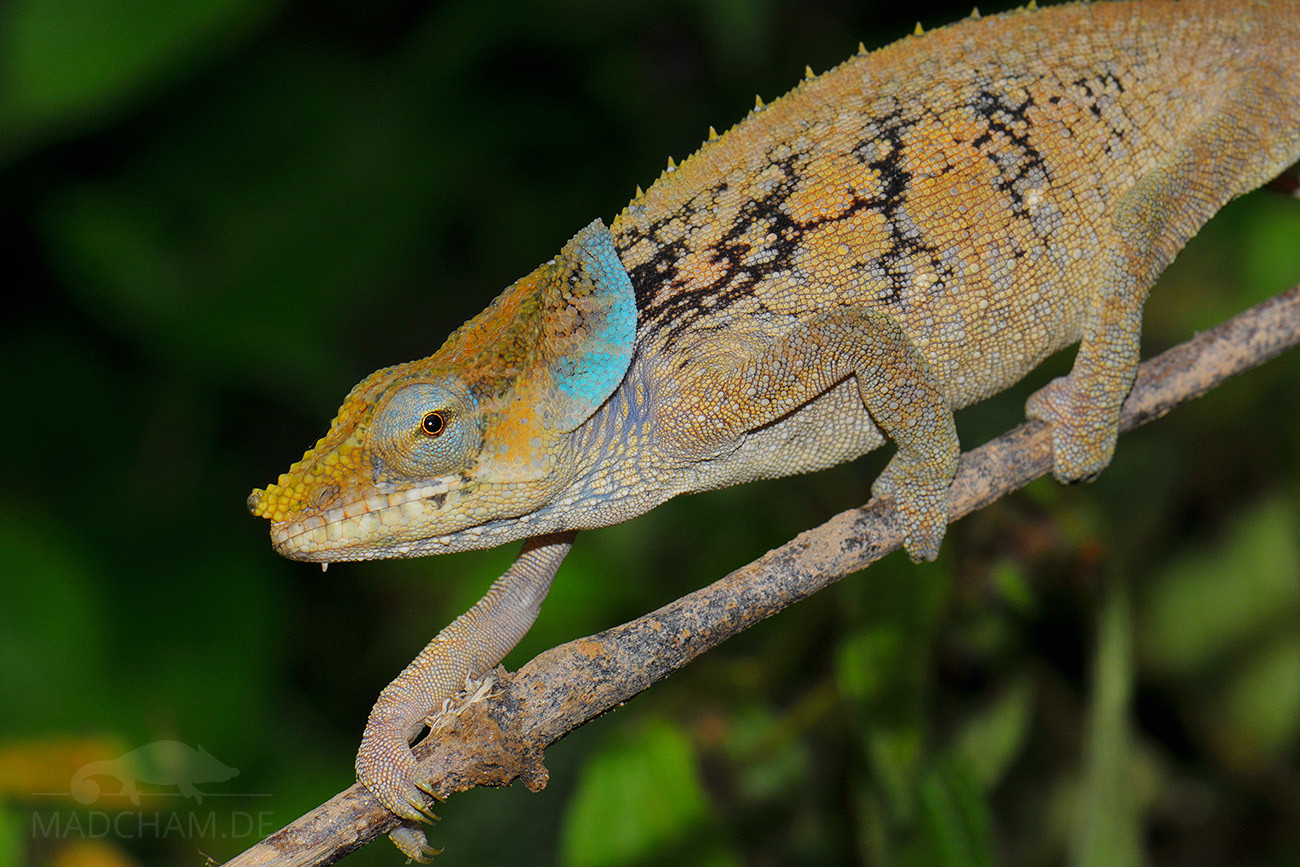 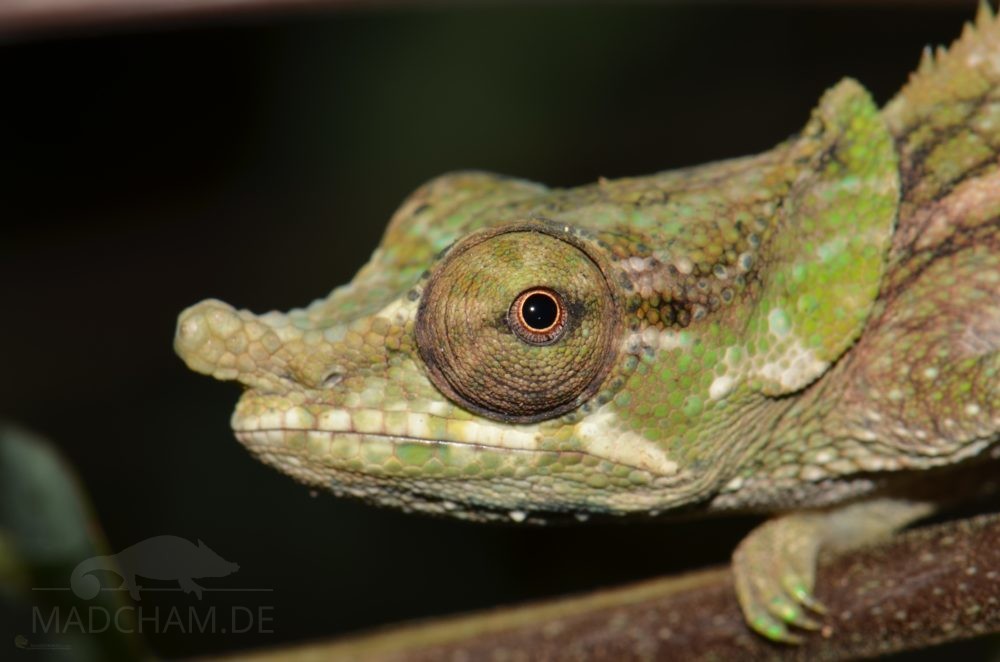 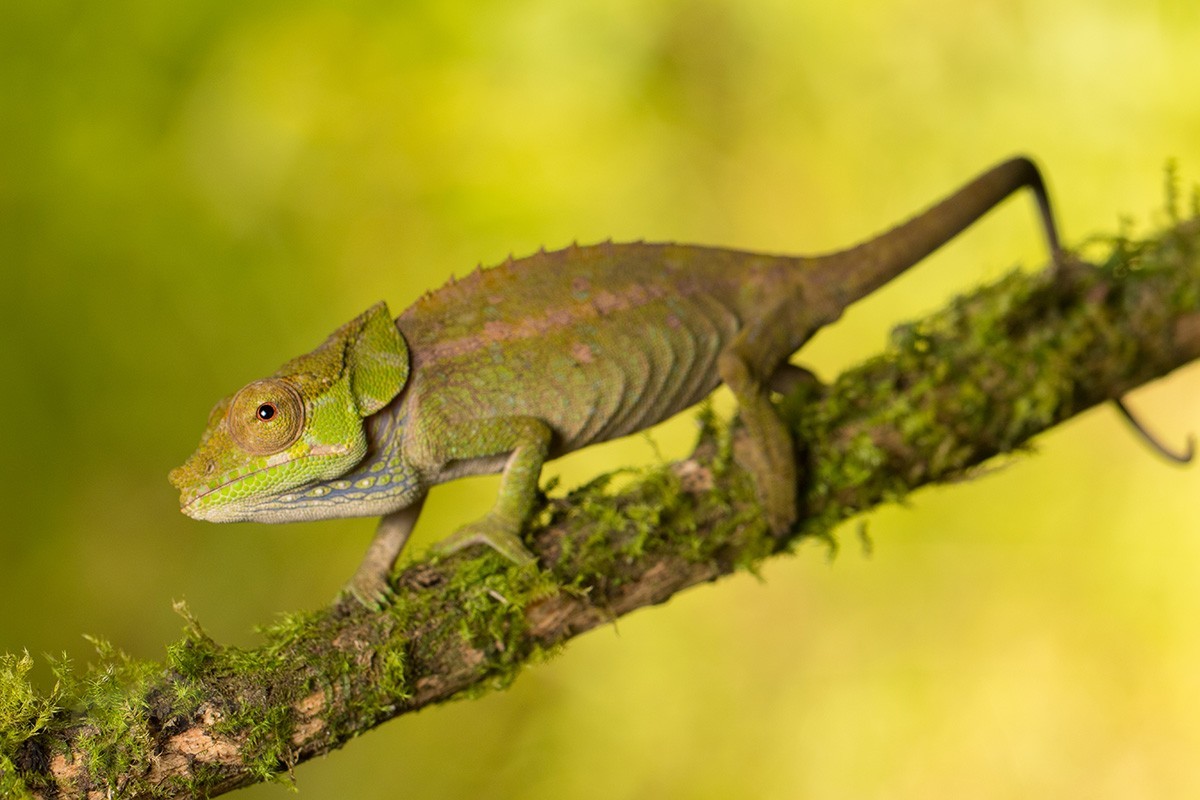 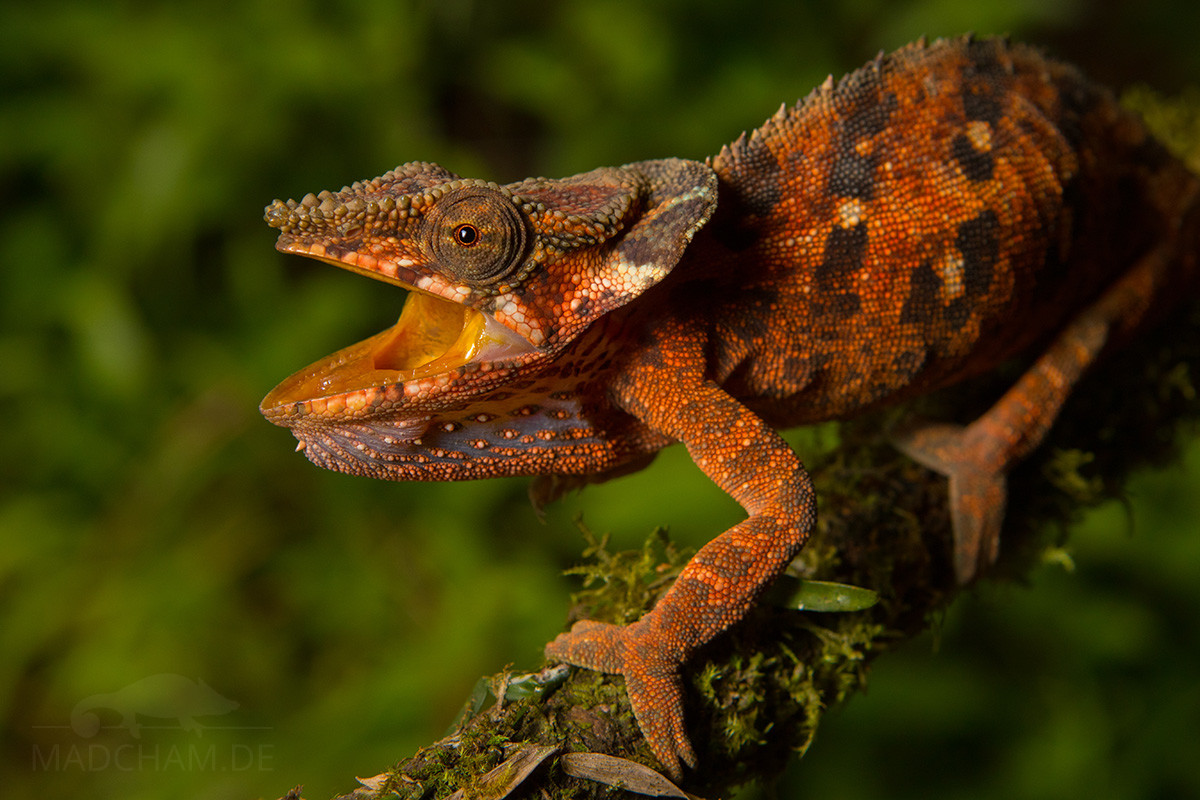 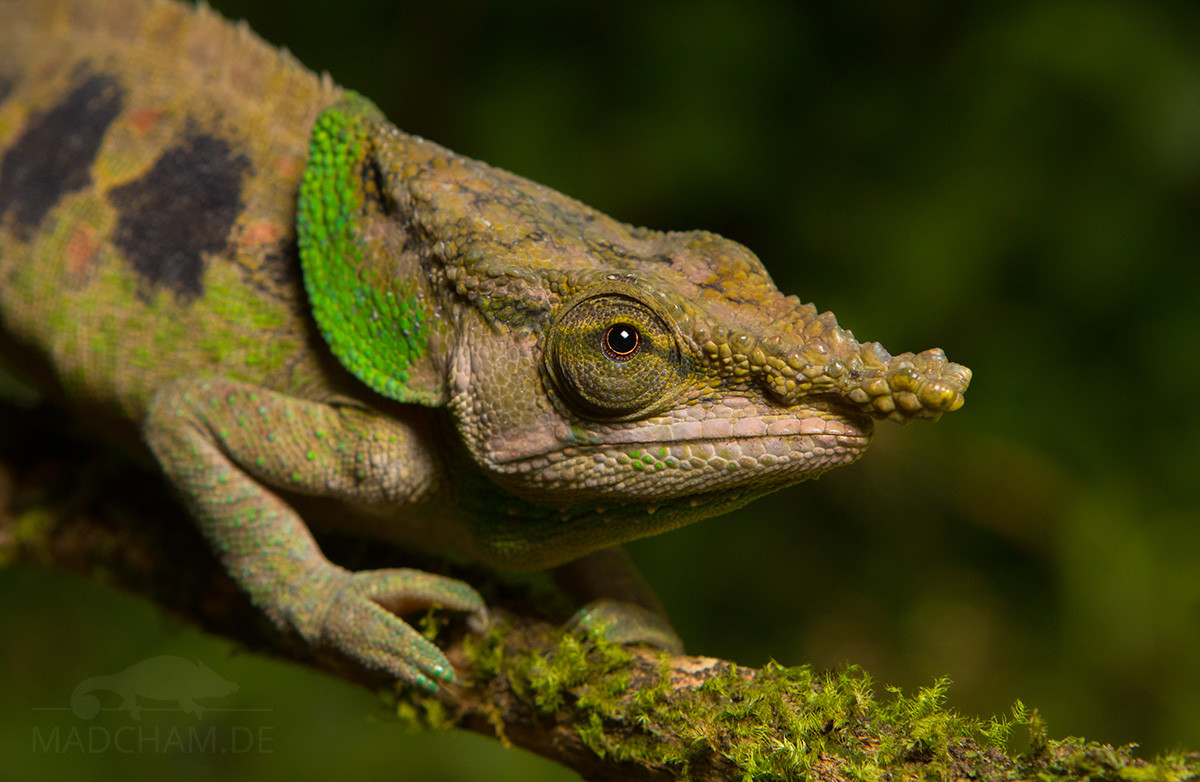 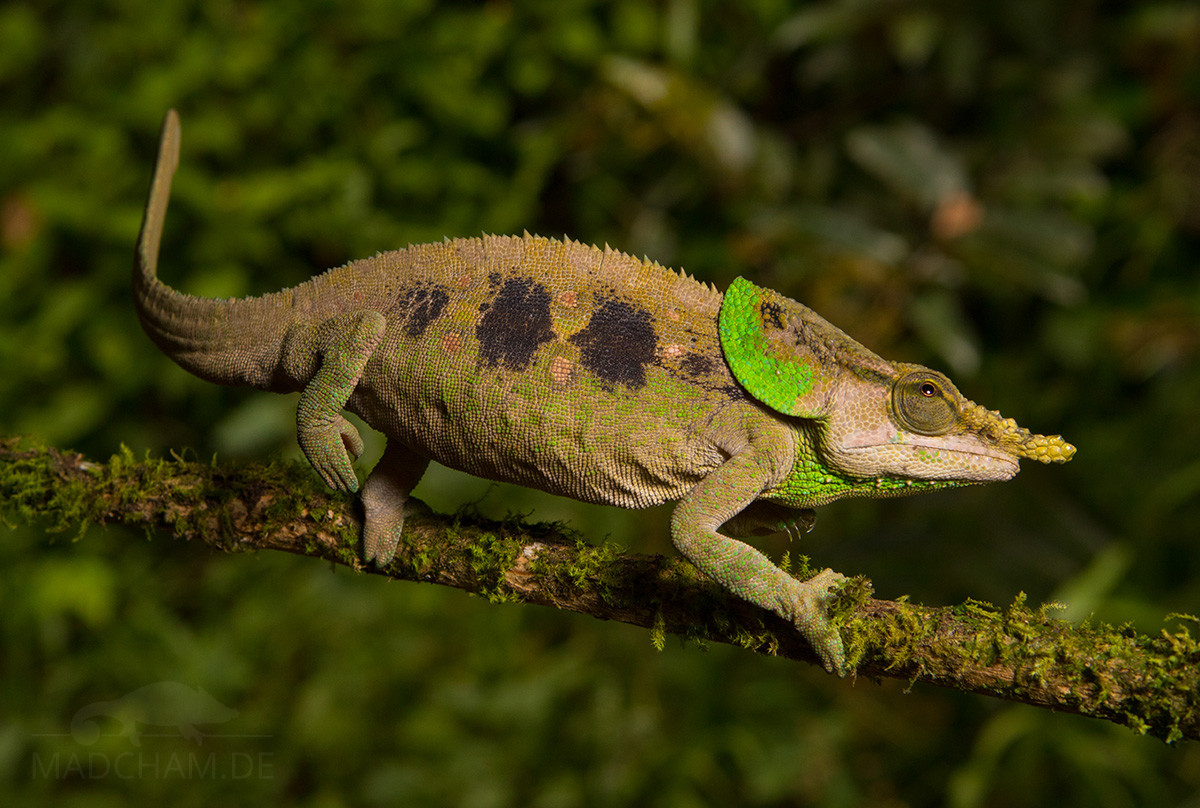 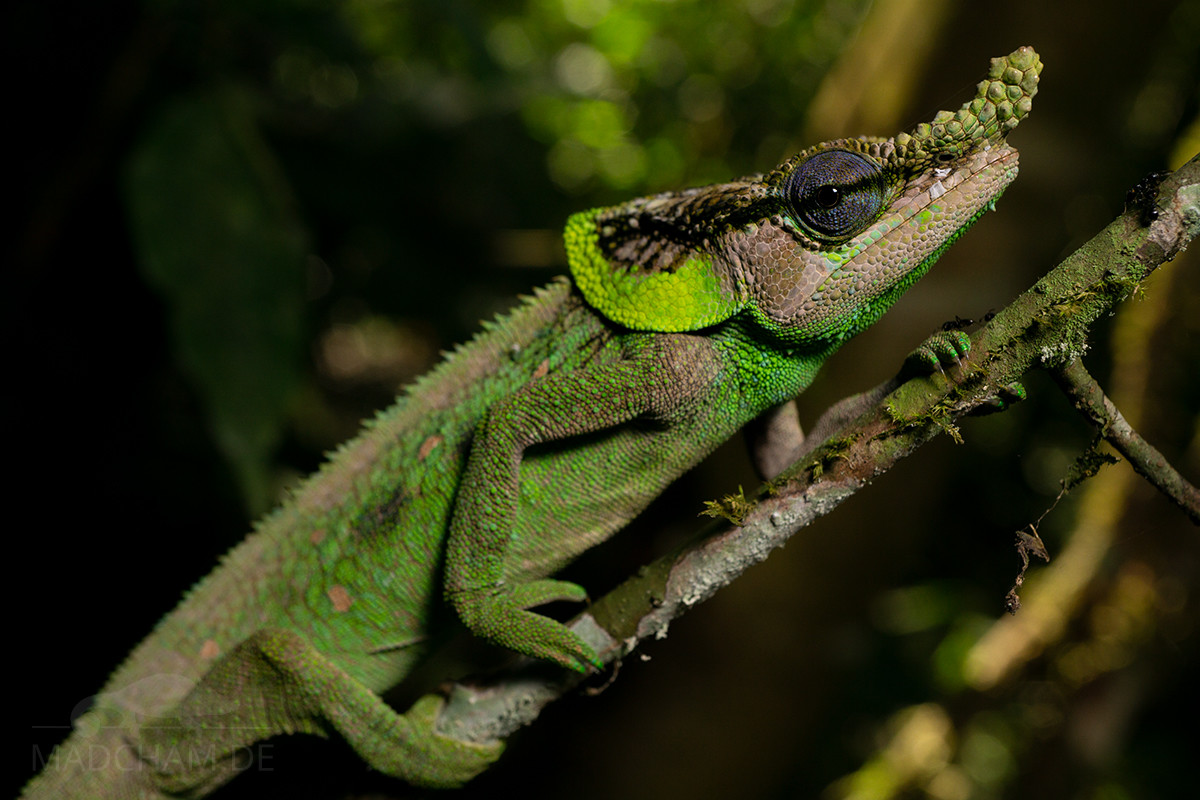 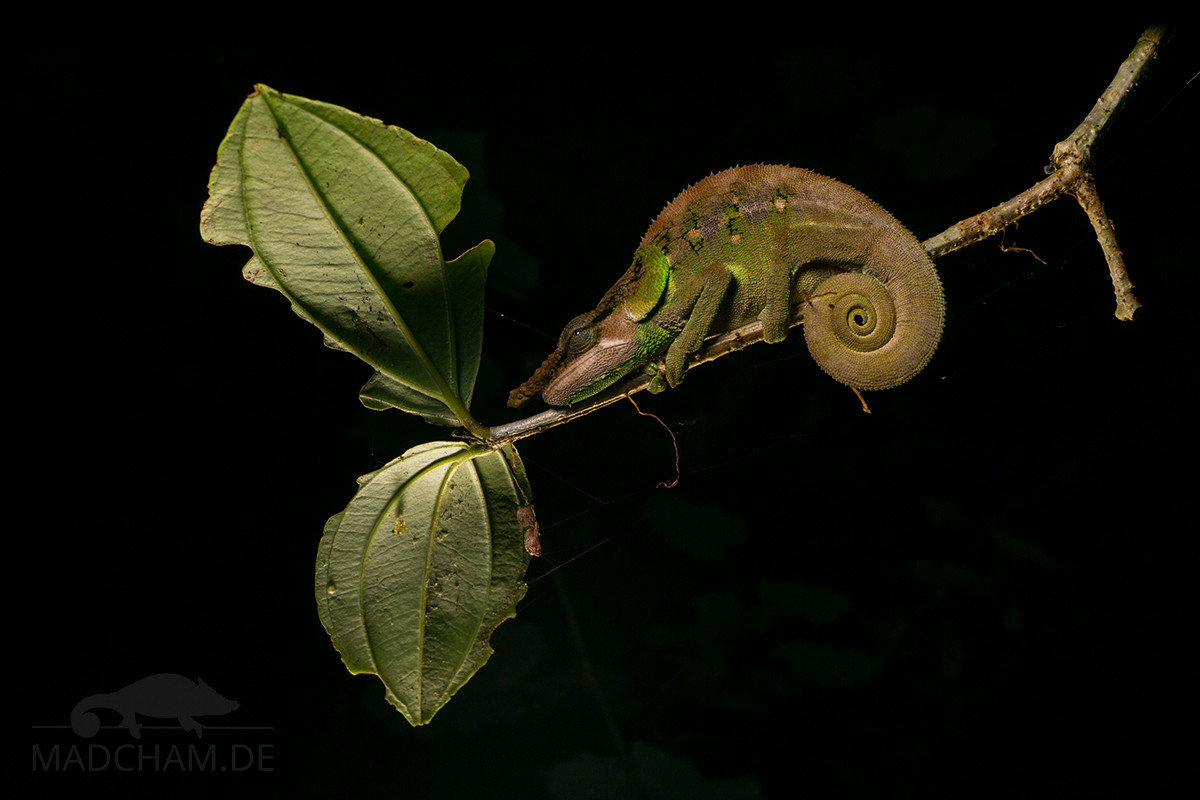 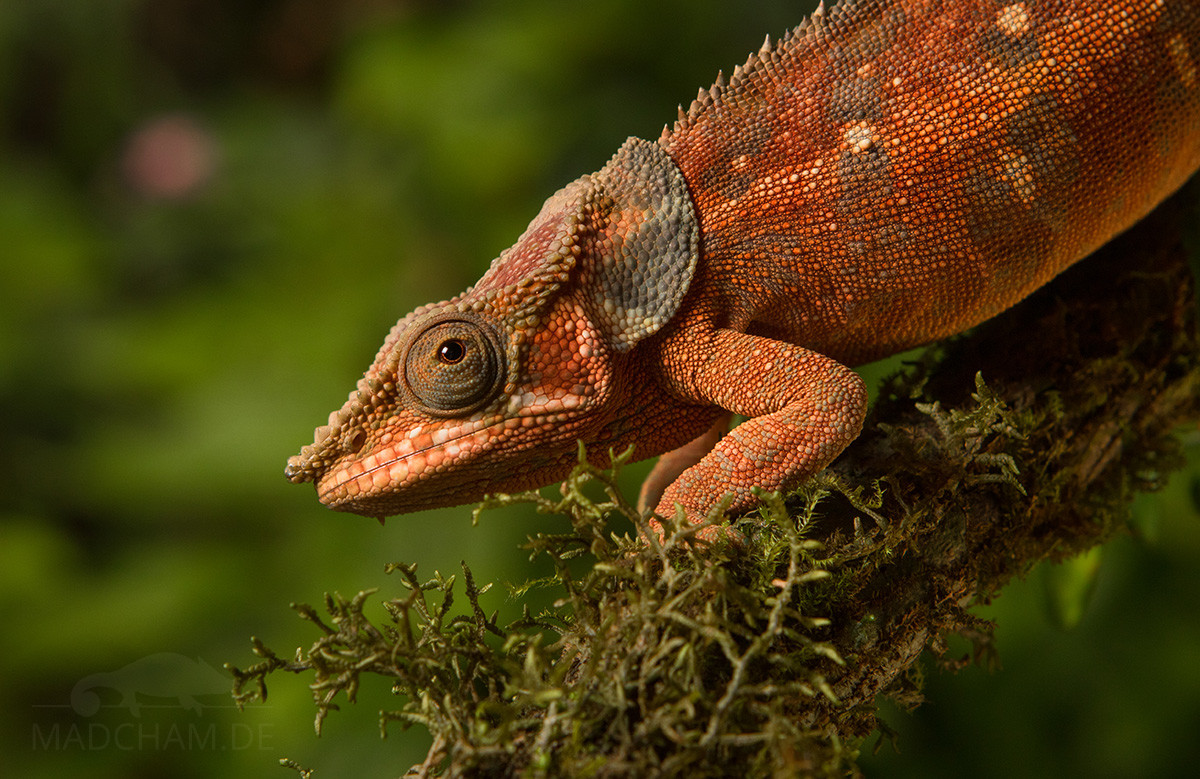 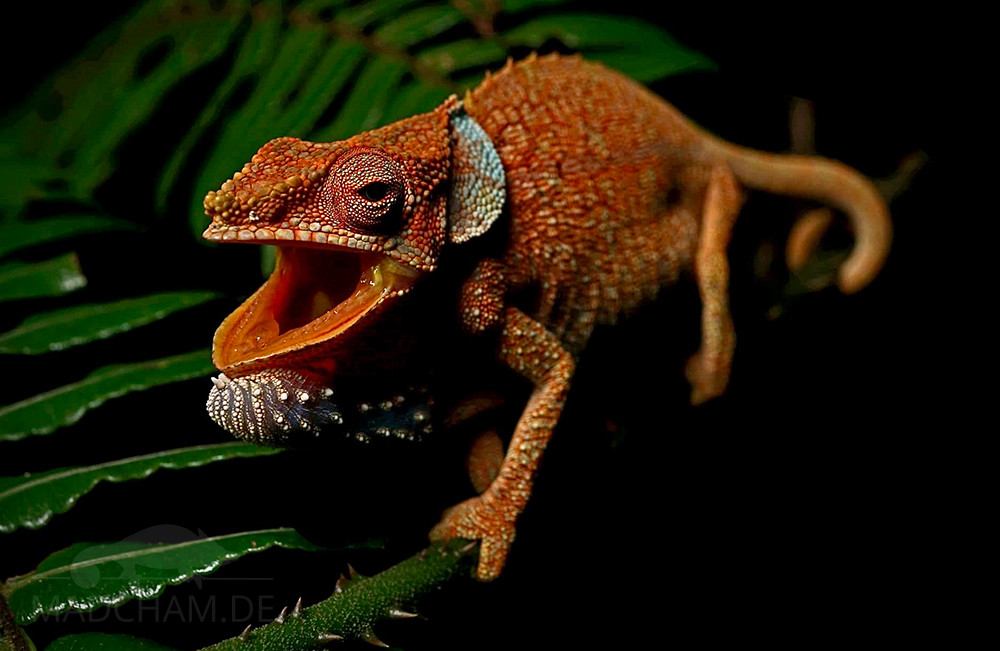 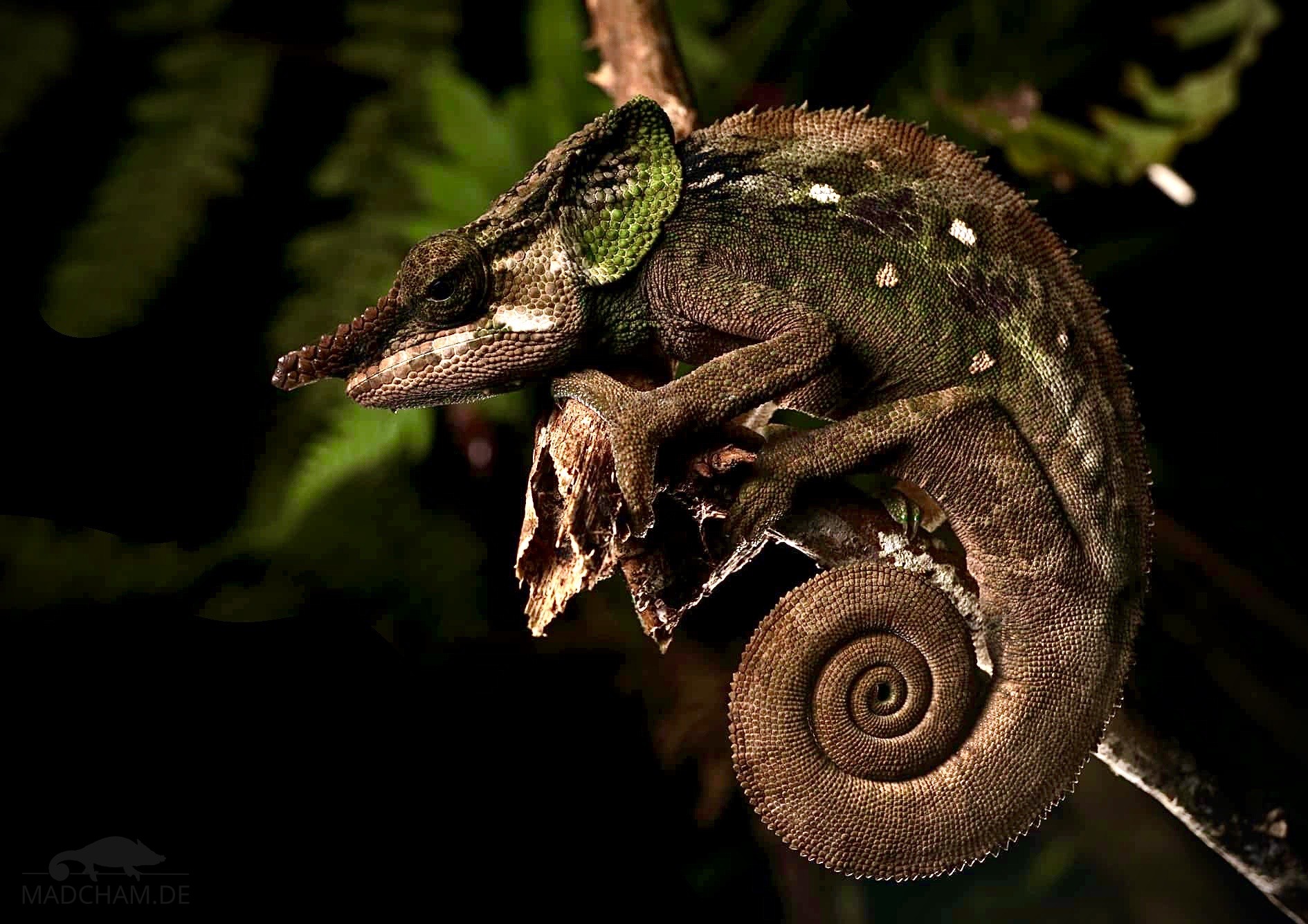 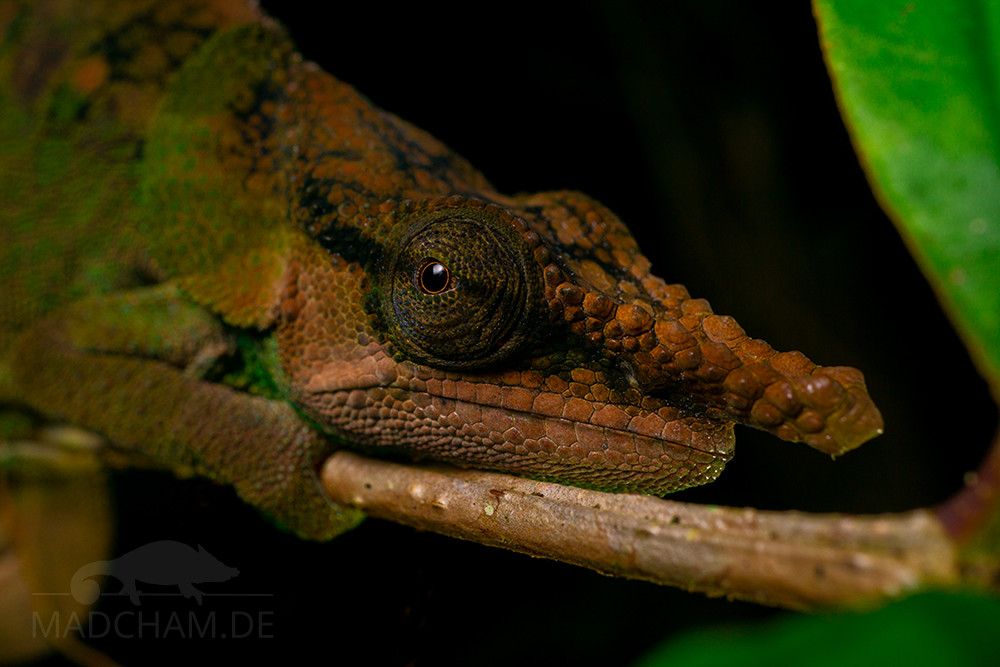 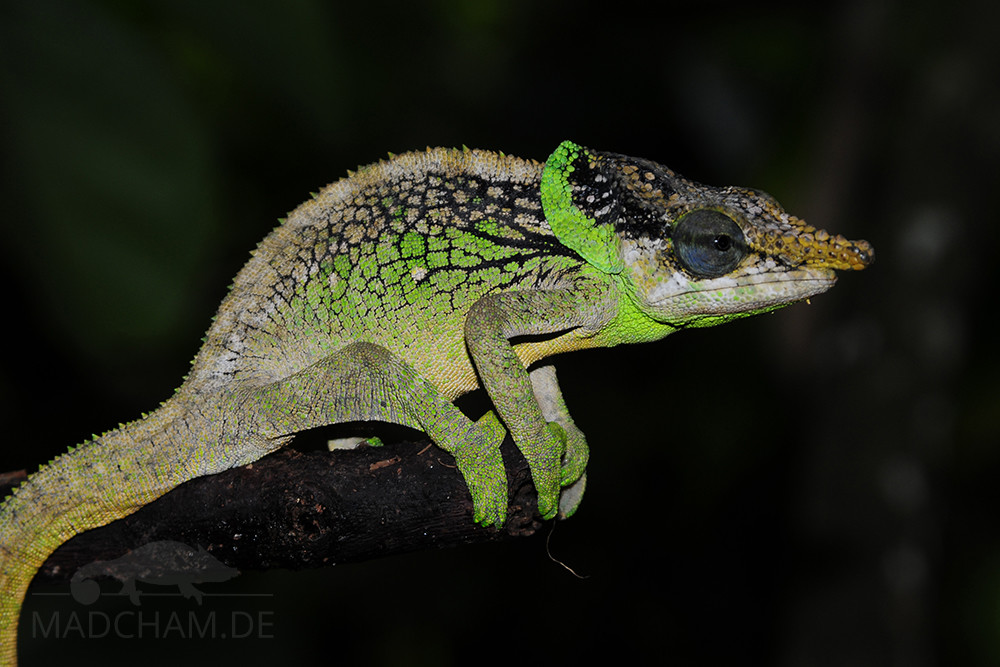 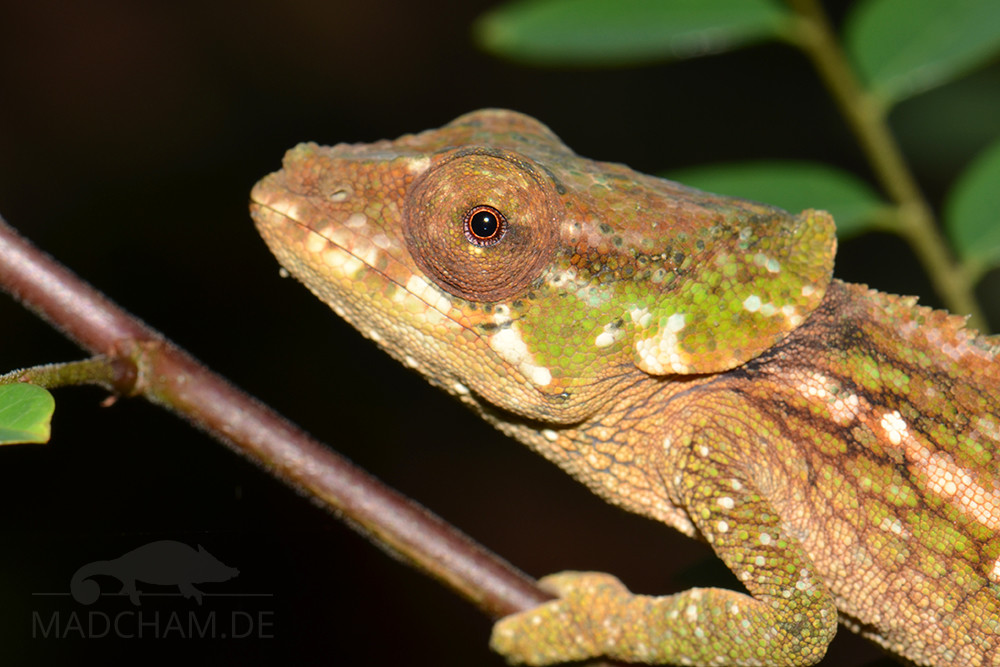 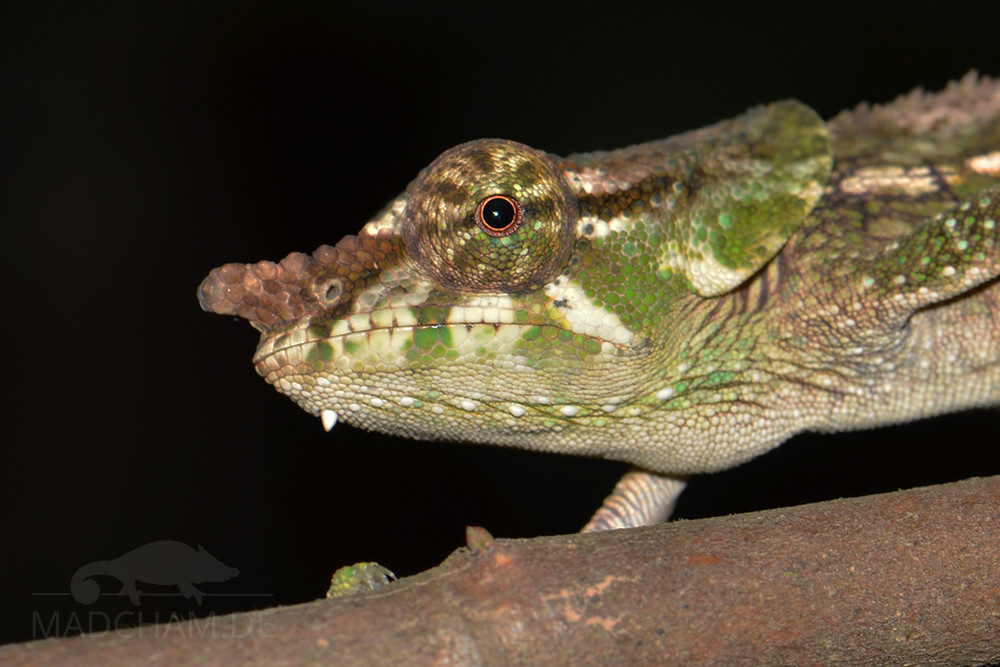 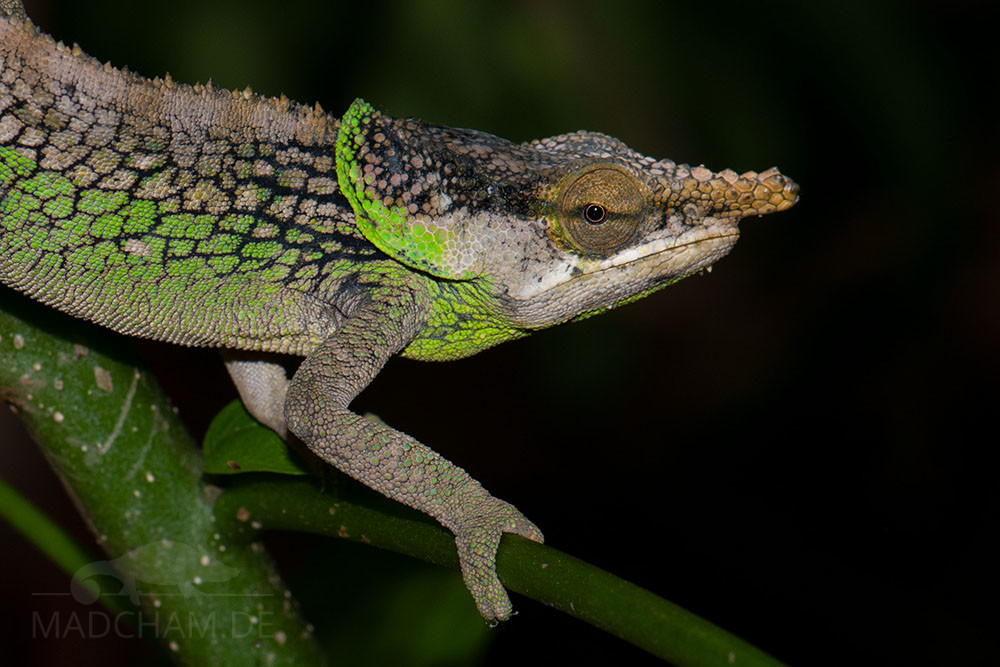 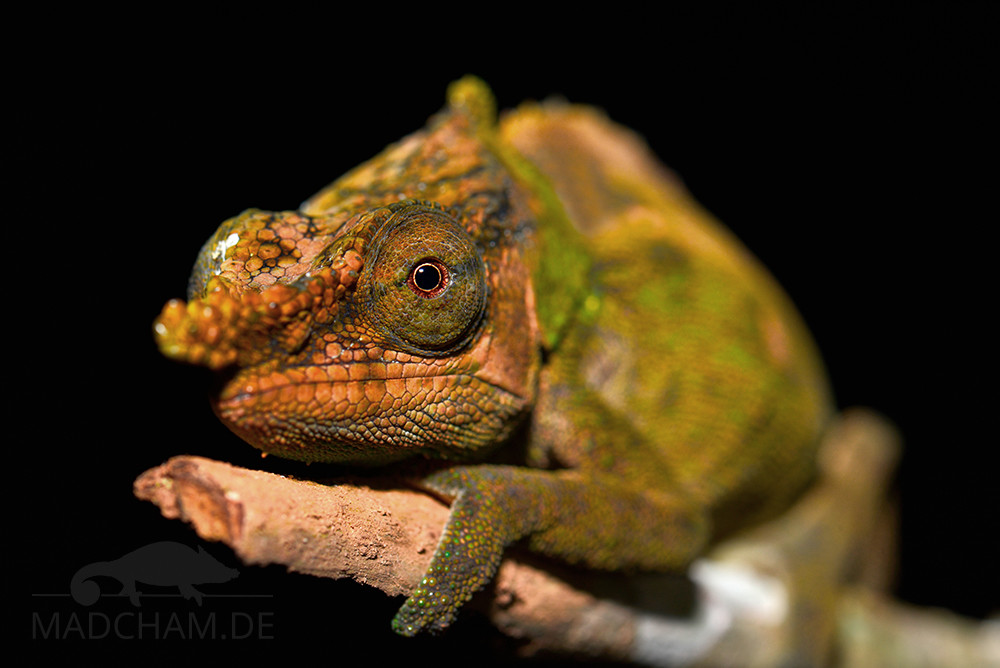 The German zoologist Albert Carl Ludwig Gotthilf Günther, then Director of the Zoological Department of the Natural History Museum of London (Great Britain), named Calumma malthe in 1879 in a very short description. How he came to the name malthe is unfortunately unknown.

This fascinating chameleon species inhabits the eastern rainforests and mountain cloud forests of Andasibe, Anjanaharibe-Sud, and Marojejy national park. The places we found them always had very dense vegetation and wide inside evergreen forests. We could not find any of these chameleons outside of very dense vegetation. During the daytime, this species is hardly visible. So if you like to find this species, try it at night.

This chameleon species is easy to identify by its large occipital lobes and the characteristic nose appendage in males. Coloration is mostly green-greyish with grass green parts on the flanks and the occipital lobes. Total length in males is 31 cm, and 28 cm in females. During mating season (January to April), females have occipital lobes surrounded by blue color and blue eyelids. The throat of both genders has one or two enlarged scales, the dorsal crest some spines of which each third or fourth is larger than the others.

When stressed or in an aggressive mood, these chameleons spread off their occipital lobes so they look much larger and more impressive. Of course, they also hiss and throw by moving sidewards.

The following photos show extracts from the habitat of Calumma malthe in the region around Andasibe. The species prefers to be found near small rivers keeping humidity always high. Calumma malthe lives exclusively in the middle of the rainforest, between epiphytes, ferns, lianas, and mossy branches. It prefers narrower branches of large trees, where the undergrowth is particularly dense and one can hardly see anything because of the confusion of branches.

Hereinafter you can find some 360° pictures from Andasibe region and Vohimana. You can move inside these pictures via mouse click in all directions. If you click on the Theta logo, a new window with an enlarged view will open. You will also have the opportunity to look at the pictures in full-screen mode. Enjoy!