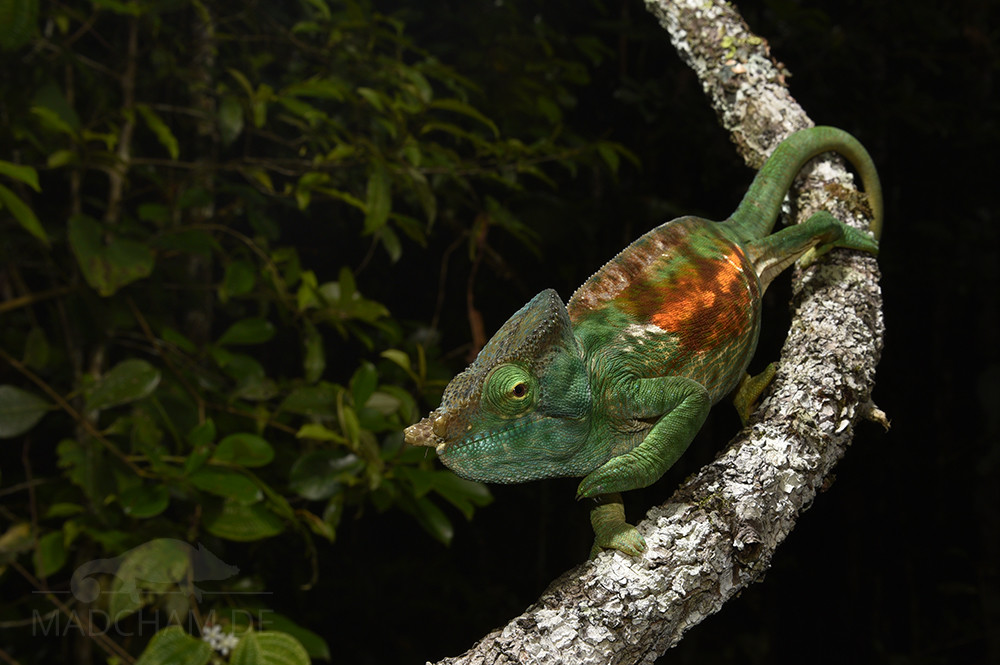 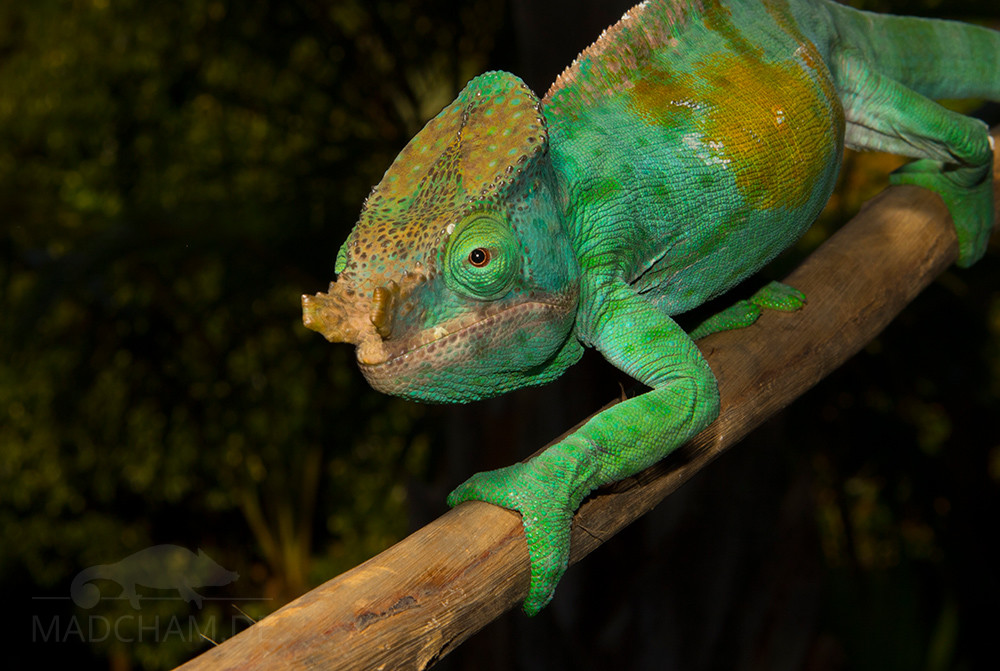 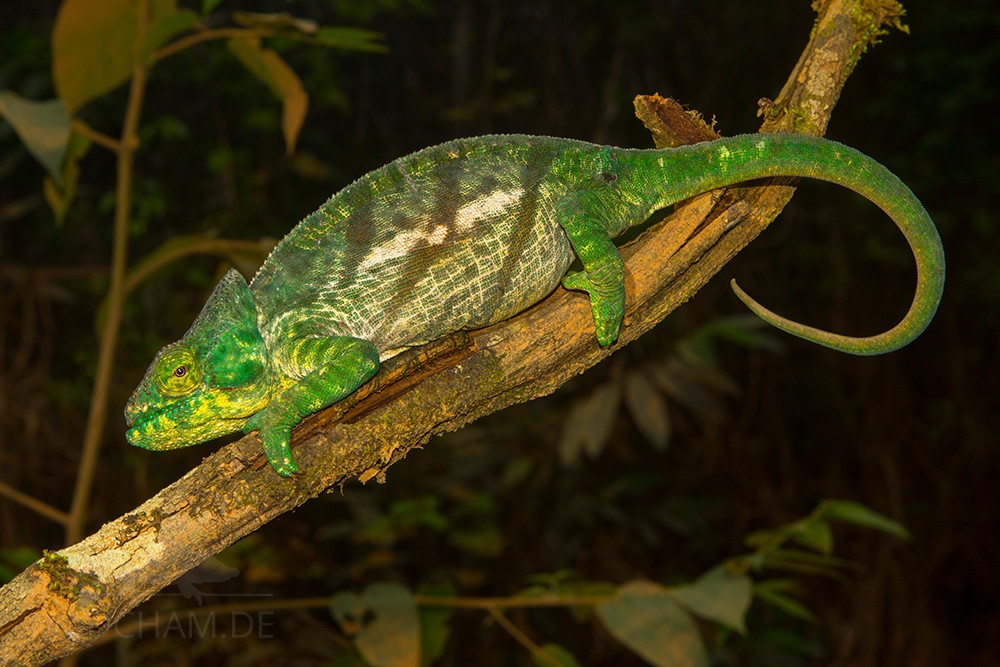 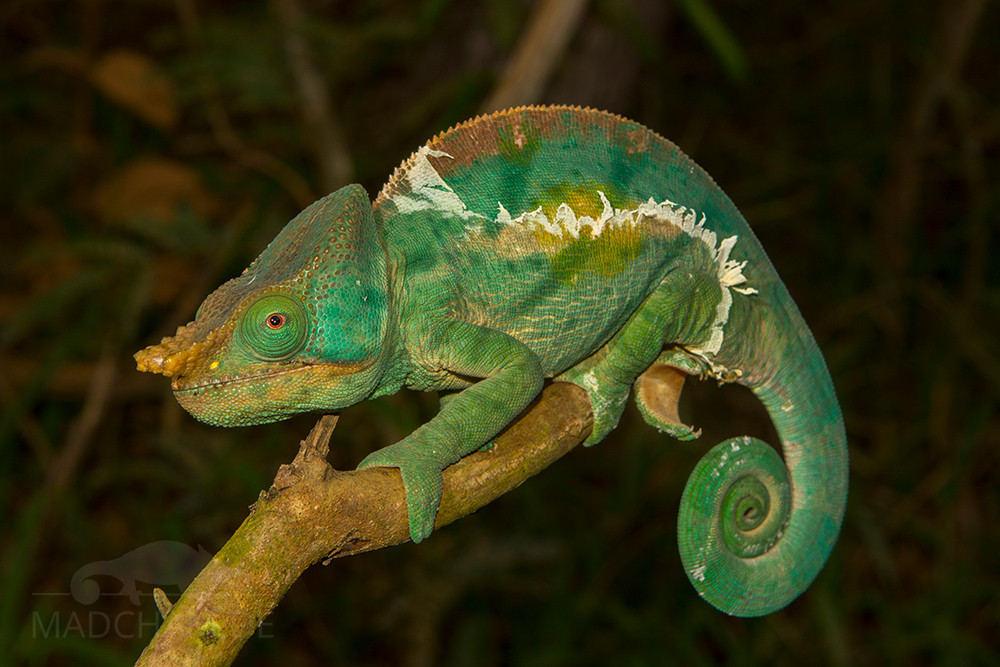 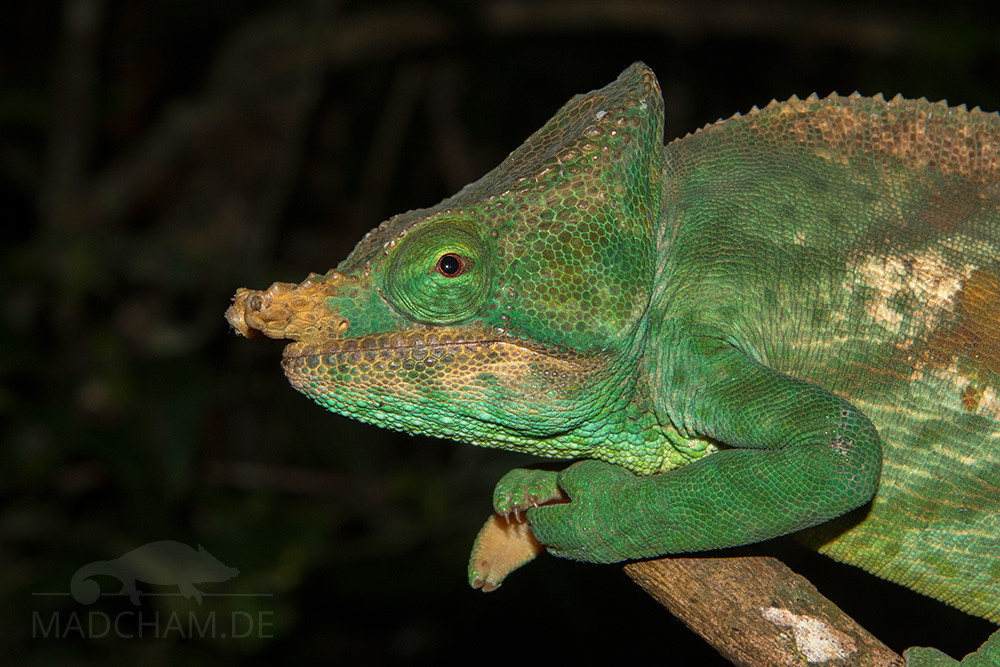 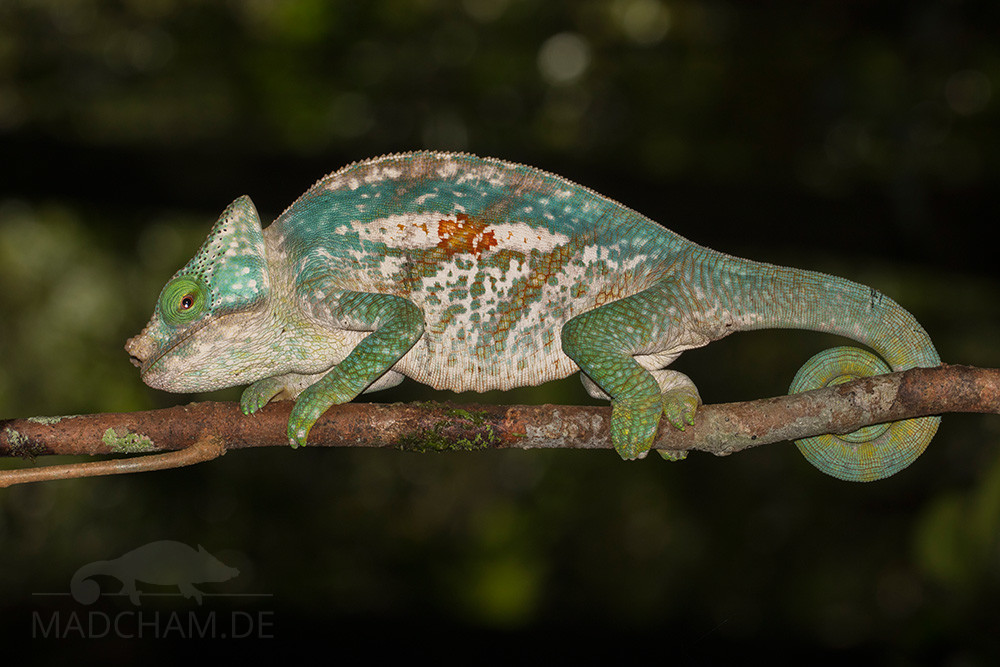 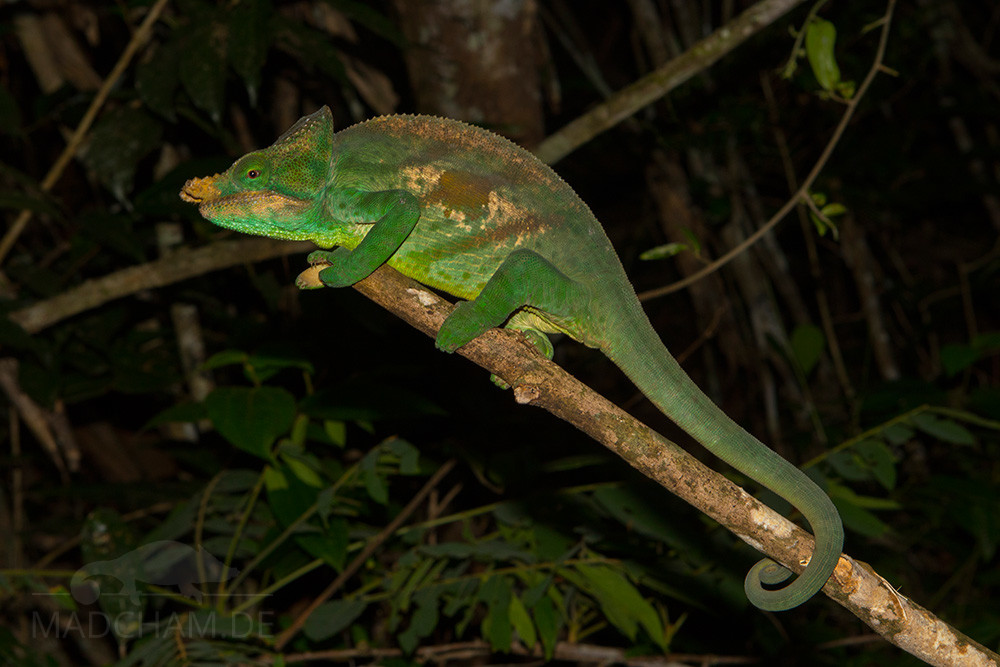 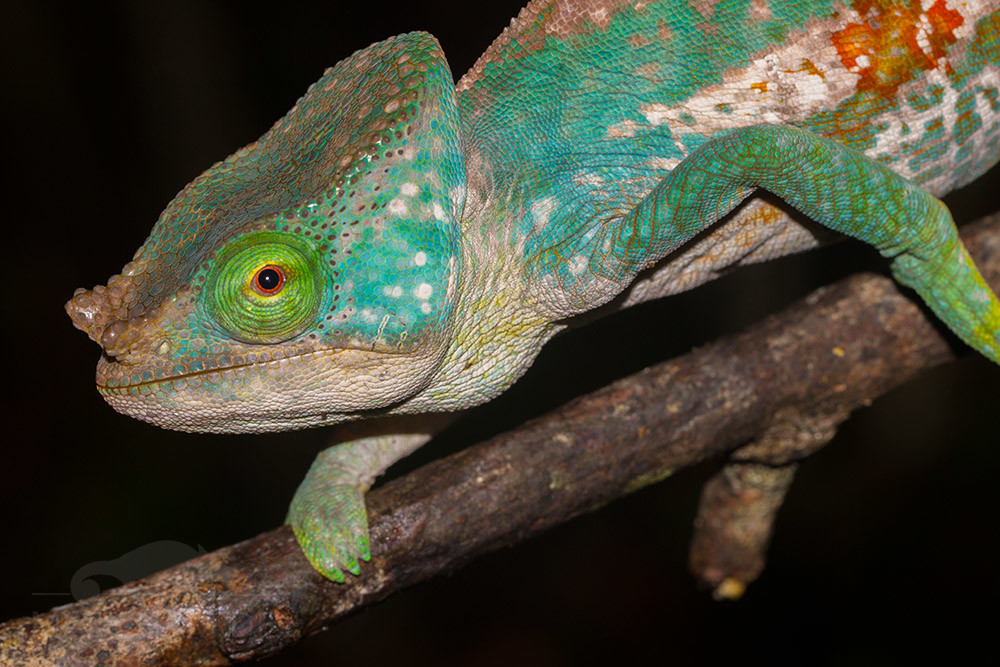 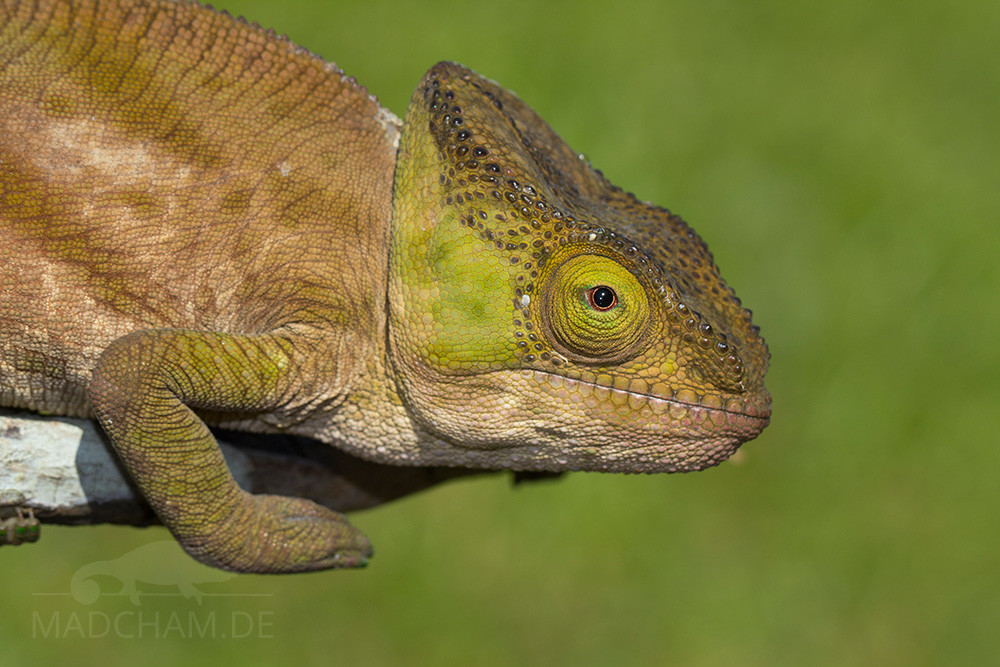 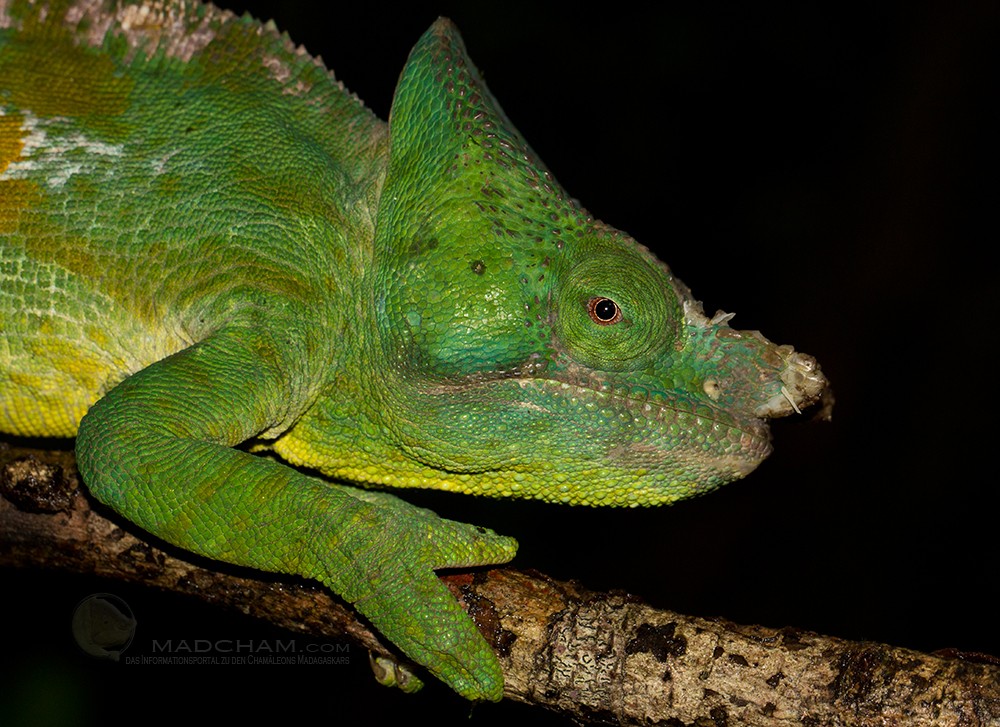 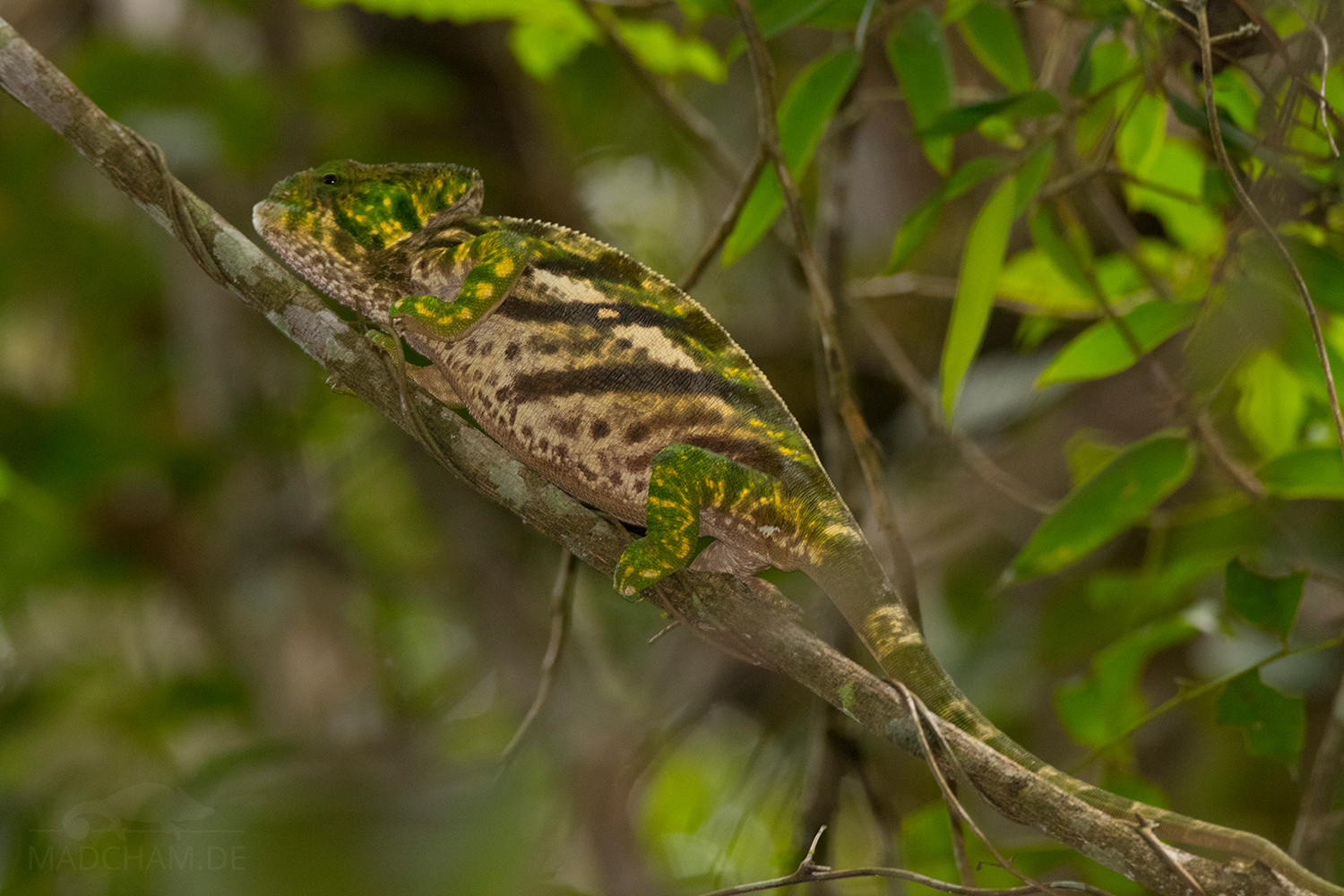 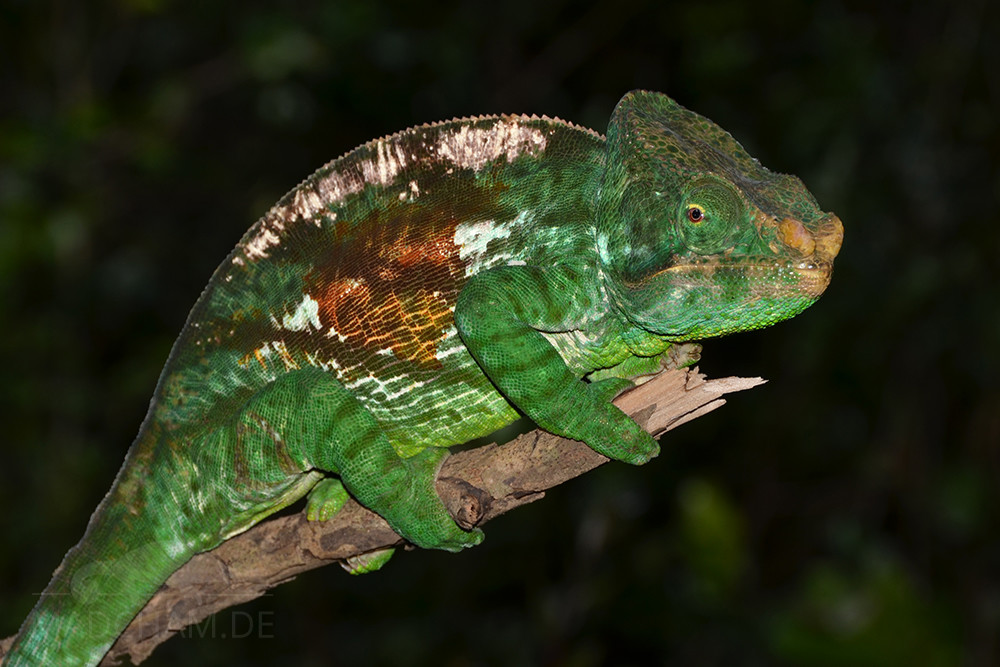 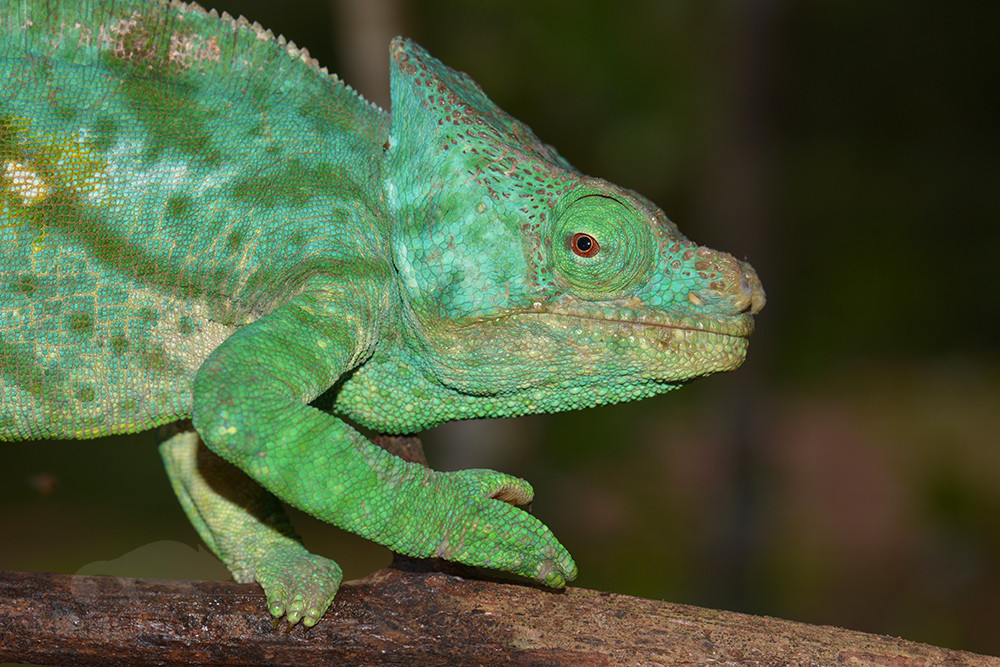 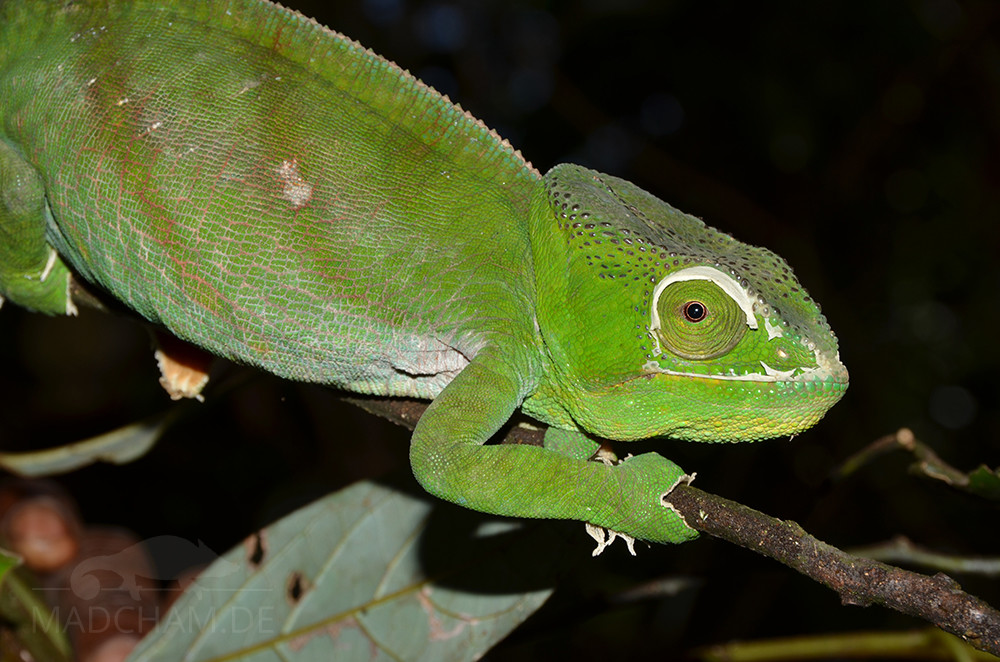 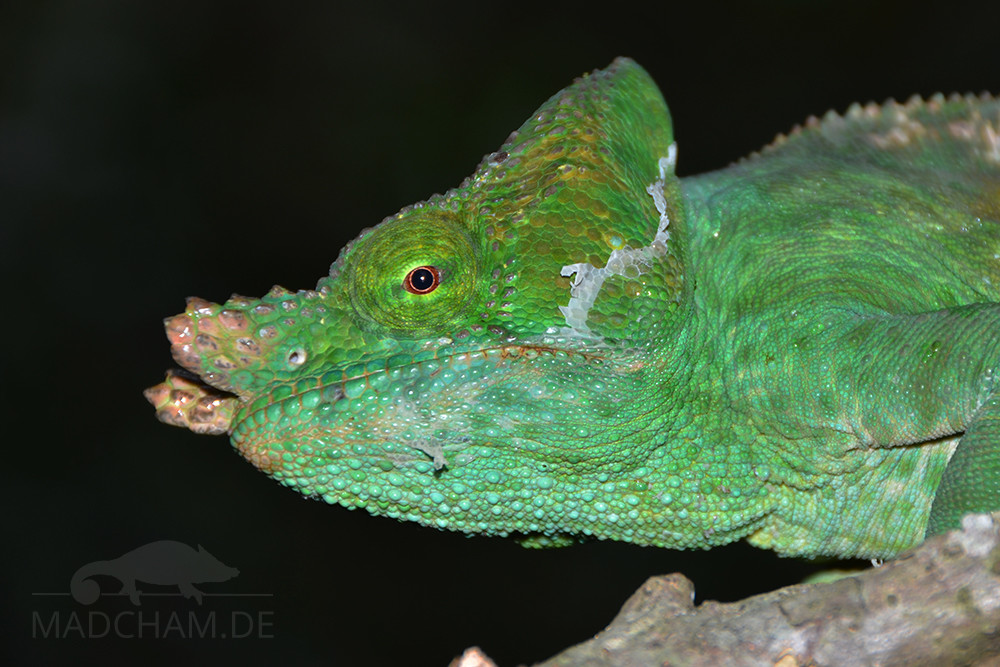 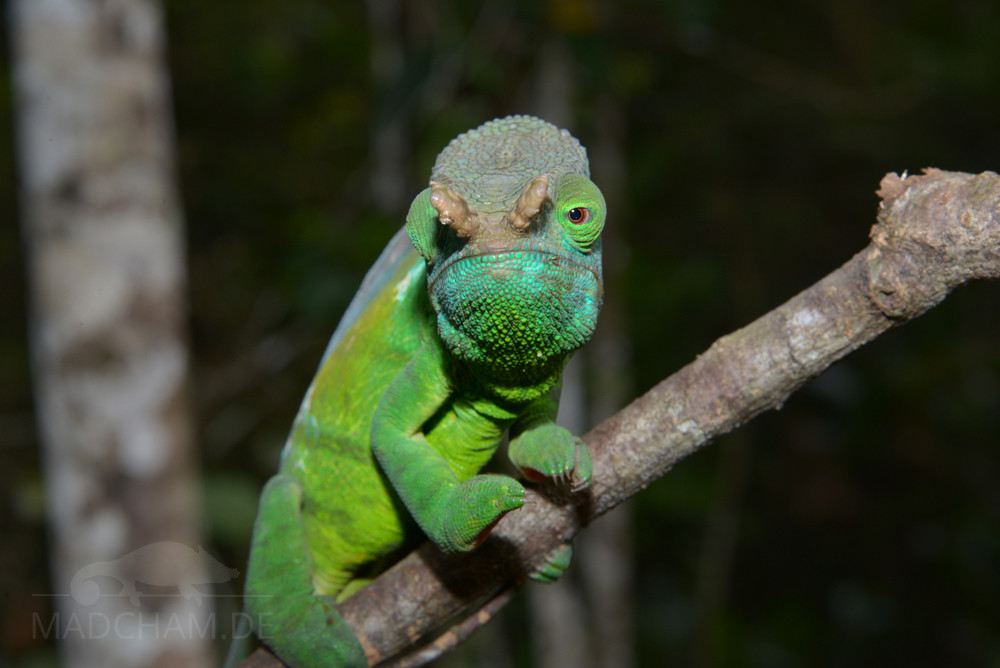 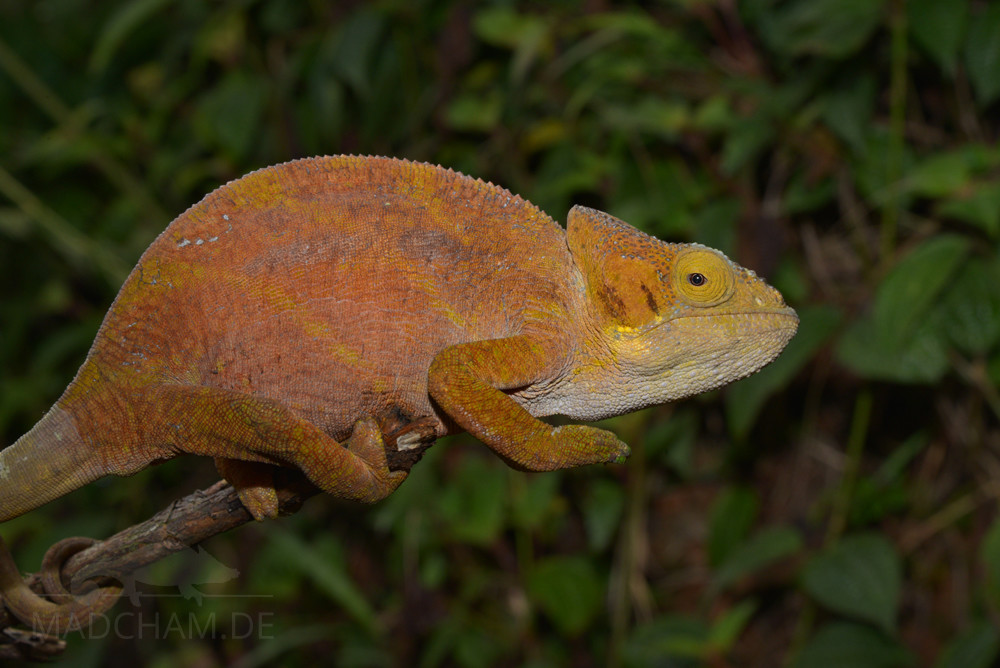 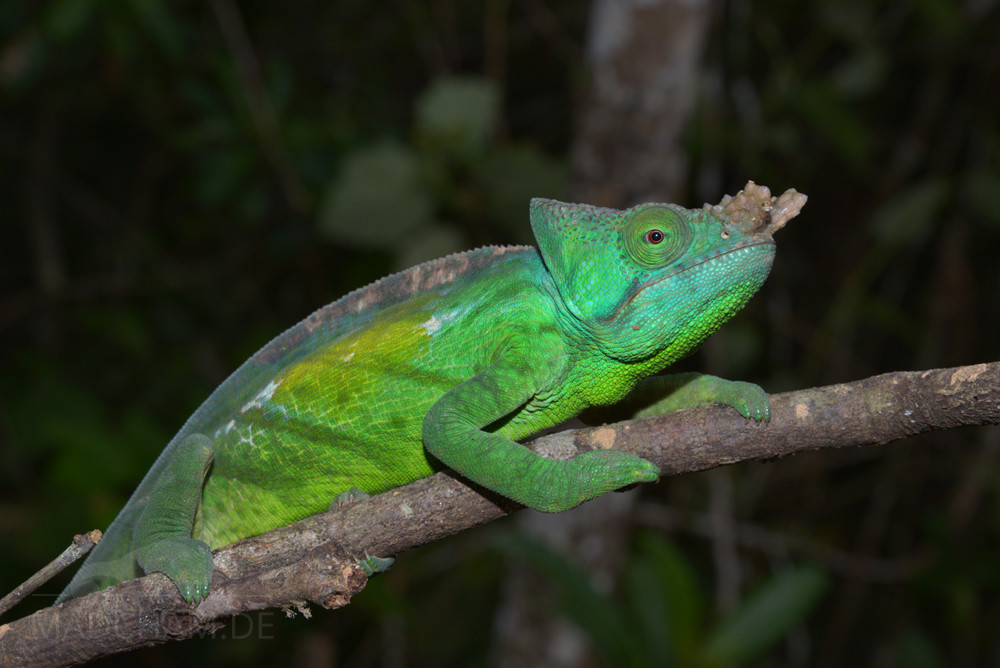 This subspecies of the Parson’s chameleon mainly lives in the rainforest around Andasibe. They are rather easy to find in Analamazaotra and the communally led reserve V.O.I.M.M.A. The habitat is an evergreen rainforest and the animals can even be found in the gardens of hotel Feon’ny Ala. They often sit in head height.

Calumma parsonii cristifer is a little smaller than Calumma parsonii parsonii, but nevertheless has an impressive size with 55 to 60 cm total length. They have a green-turquoise basic color with different accents. Males often have a distinct orange spot on the sides, they also have two nose appendages that are characteristic of Parson’s. Females have only very small nose appendages. The easiest way to distinguish this species from its sister species is to look at the dorsal crest: Cristifer has a ridge, and parsonii has a smooth back. Until now, we could not distinguish any “locales” in this species. Males with many orange colors as well as turquoise-blueish males and even green specimen live in the same areas, partially only a few meters from each other. In females, we also could not find a difference between brown and green colored individuals, neither of which concerns age nor gravidity or finding places. 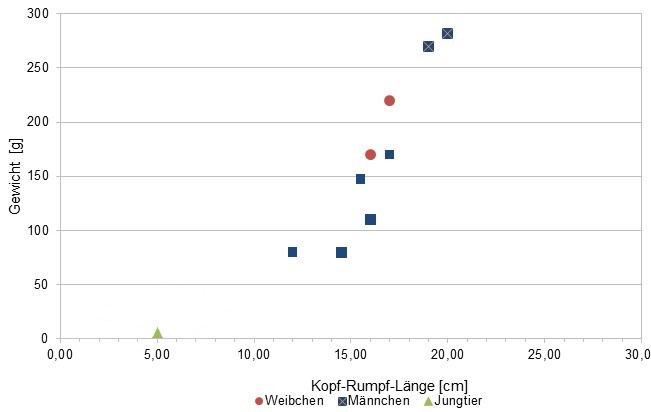 Since 2017 we measure the weights of Calumma parsonii cristifer found by us on Madagascar, as far as the animals (and our scales) participate. So far there are only a few weights, in the long term, an average weight in relation to the snout-vent-length (measured from the tip of the nose to the cloaca) for each species should be read off from as large a number of measurements as possible. This means that unfortunately not too much can be a readout of the current tables, but they can be the first clue. It is important to know that all weights were measured towards the end of the rainy season (= best food supply), so they are probably maximum weights in Madagascar. Triangular symbols in females do not mean pregnant, round symbols mean pregnant.

The following pictures show habitats of Calumma parsonii cristifer in the region of Andasibe. Some are even from finding places of the species. The rainforest of this area consists of slender trees. Calumma parsonii cristifer prefers high trees with thick branches inside the rainforest. Sometimes you can also find them in secondary vegetation when there’s nothing else around.

Hereinafter you can find some 360° pictures from Andasibe. You can move inside these pictures via mouse click in all directions. If you click on the Theta logo, a new window with an enlarged view will open. You will also have the opportunity to look at the pictures in full screen mode. Enjoy!