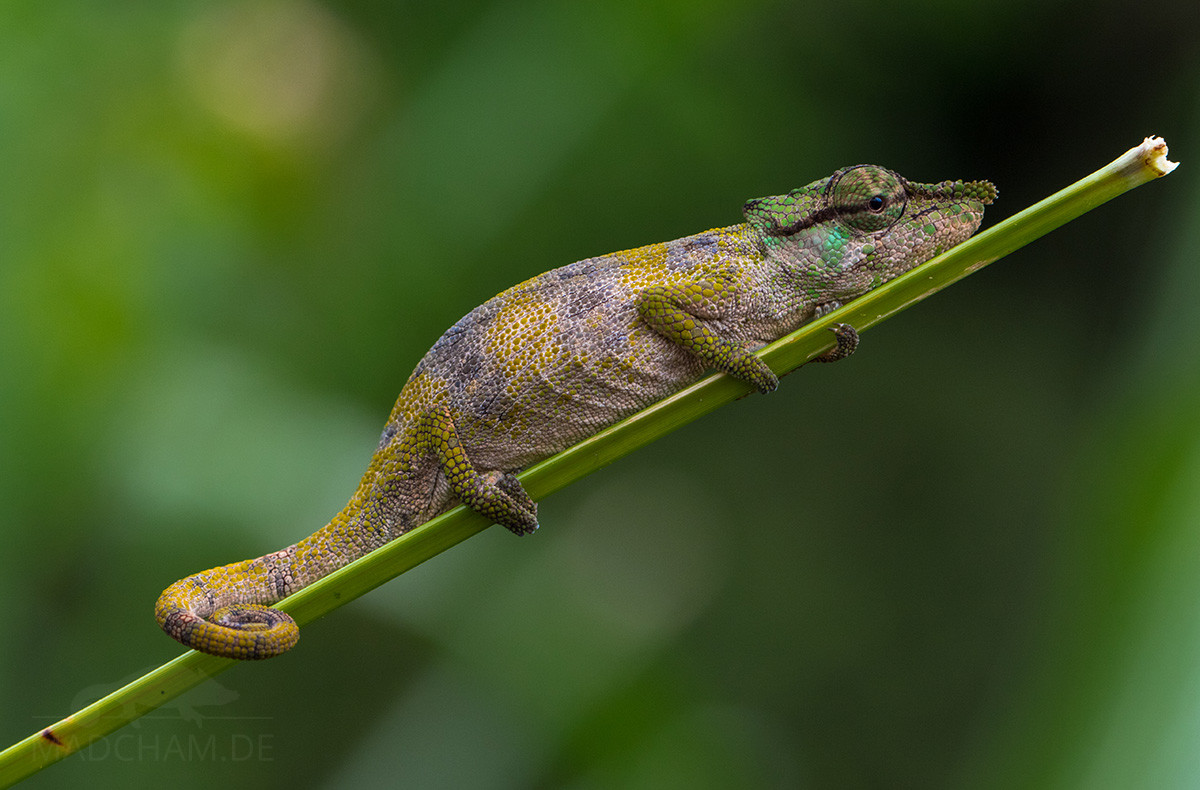 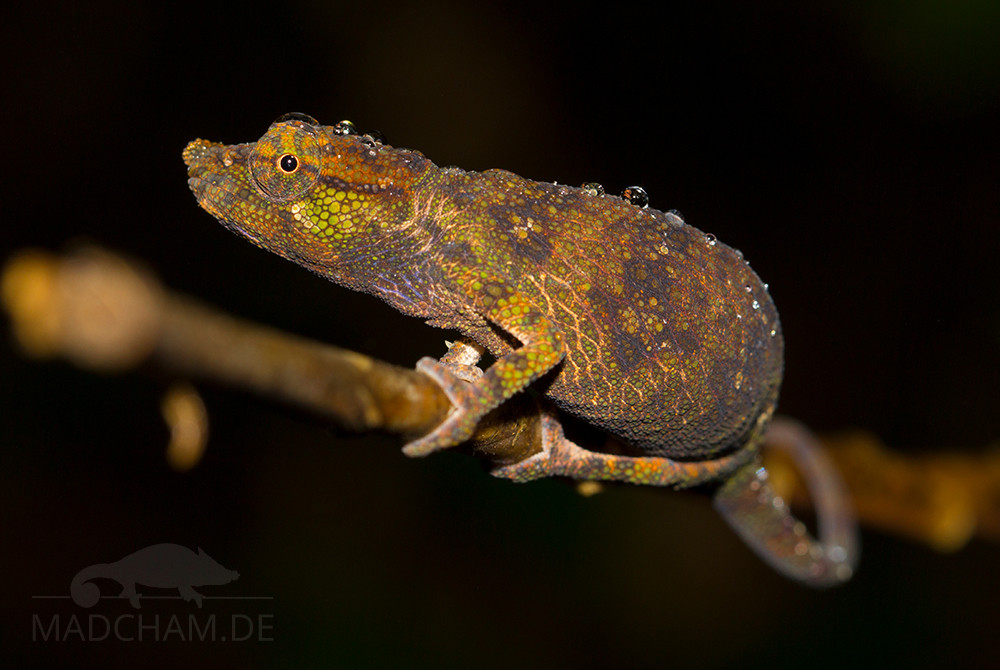 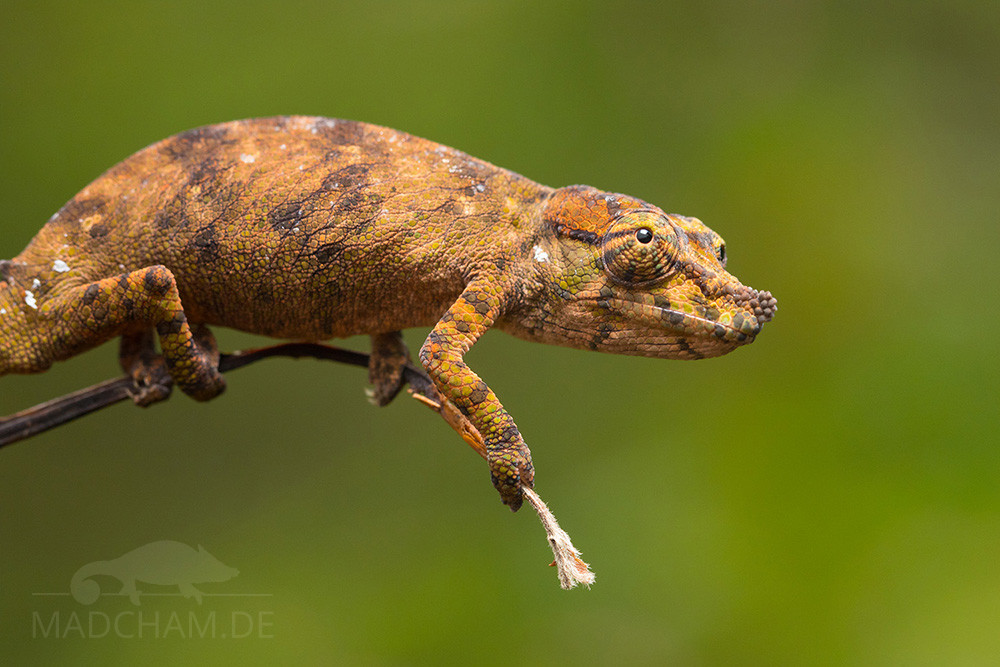 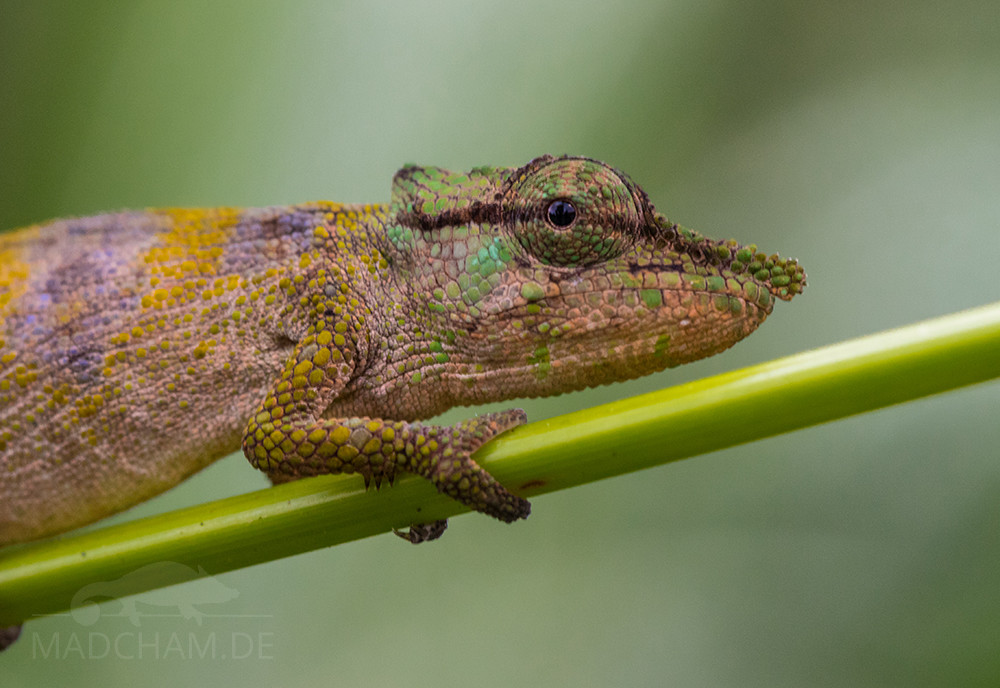 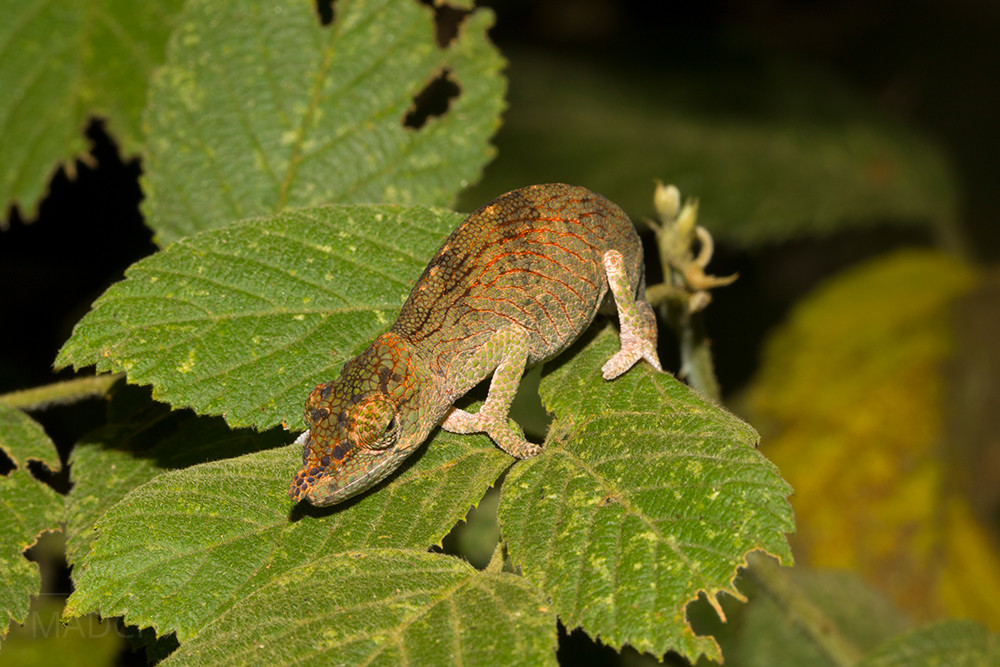 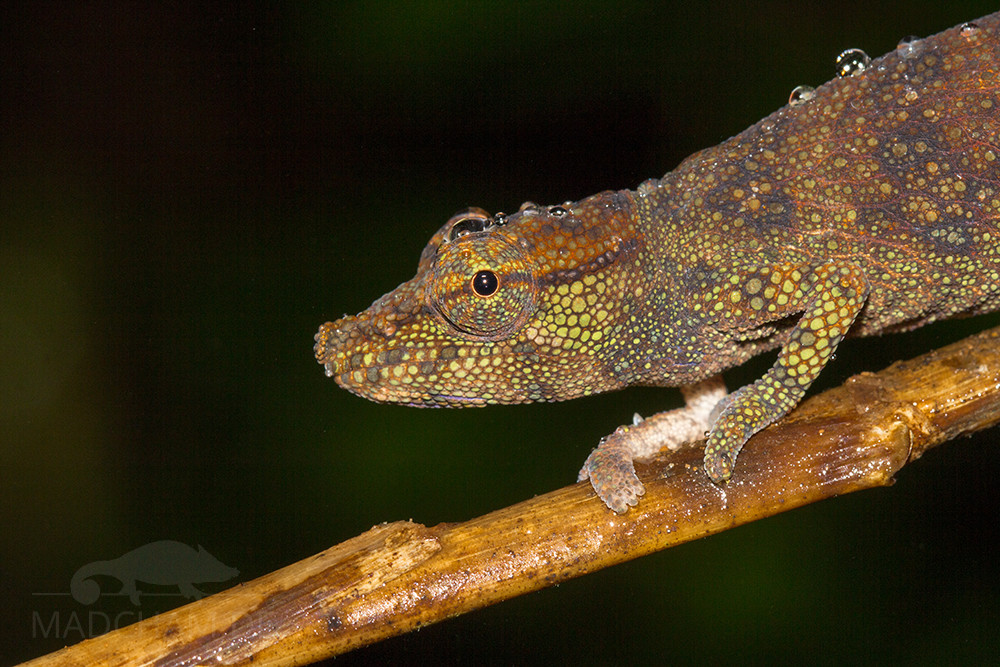 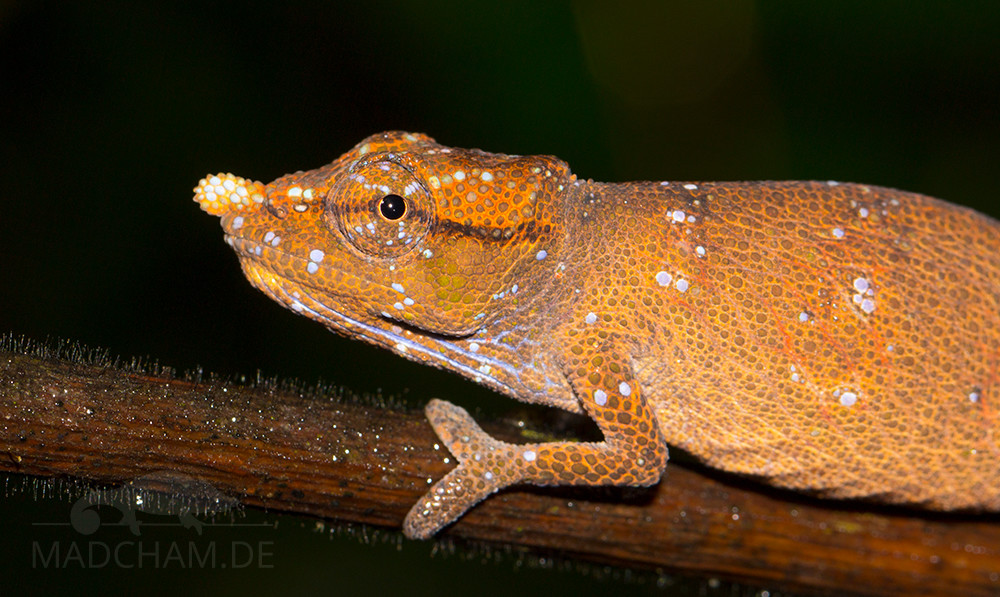 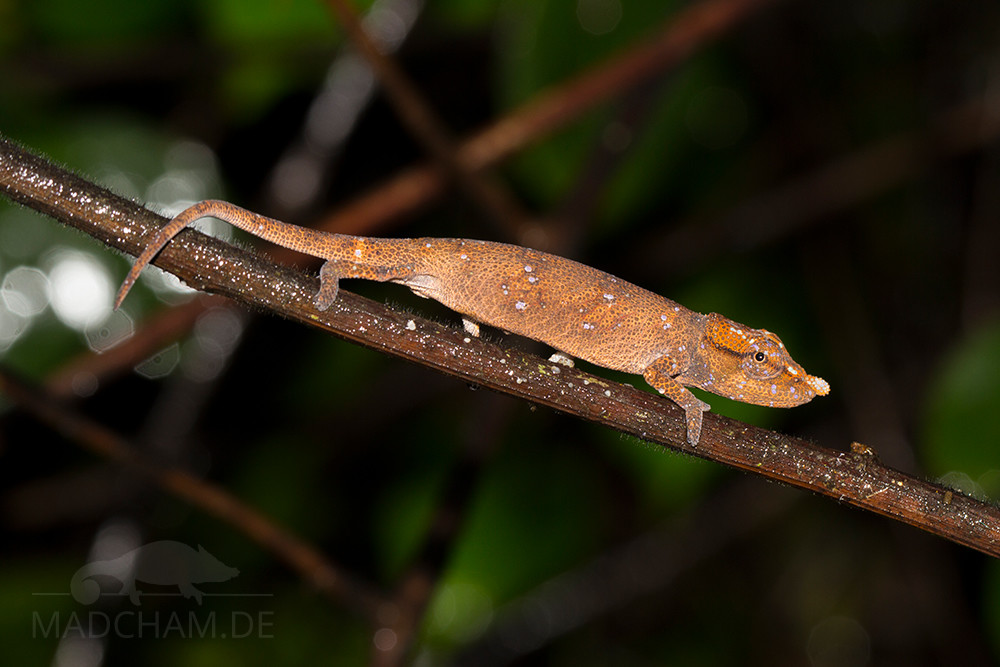 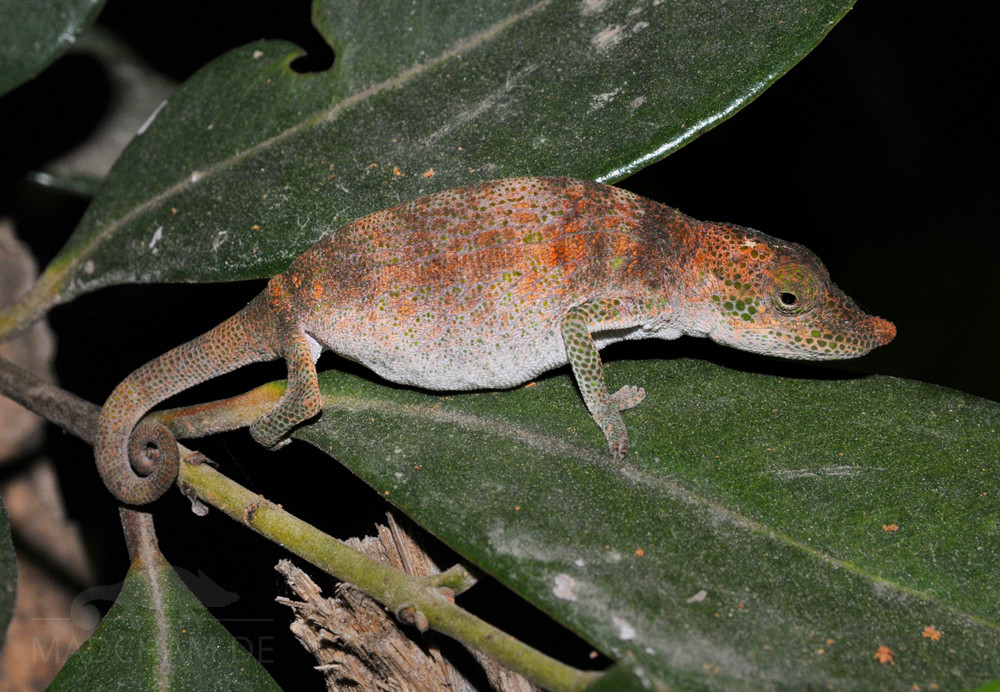 David Prötzel, Mark D. Scherz and Frank Glaw from the State Zoological Collection Munich (Germany), Fanomezana M. Ratsoavina from the University of Antananarivo (Madagascar) as well as Miguel Vences from the Zoological Institute of the TU Braunschweig (Germany) named the species after himself at the request of the Indonesian Wewin Tjiasmanto. Tjiasmanto had taken on the sponsorship of a chameleon species through the BIOPAT project. The respective sponsor pays from 2600 € upwards for a sponsorship. The money is used exclusively to support scientific research projects. In return, the sponsor can give a newly discovered plant or animal species of his or her choice.

Calumma tjiasmantoi is only known from the rainforests of the southeast of Madagascar. It is best found in the Ranomafana National Park in the southern highlands. However, the distribution area reaches up to 400 km far into the south, into the forests of Andohahela. The animals are relatively difficult to photograph, as they are usually very shy and immediately turn darkly colored behind each branch as soon as they discover a potential threat.

Calumma tjiasmantoi is a small chameleon. It grows to a maximum length of 7.7 to 9.3 cm, with the females being only slightly smaller than the males. Characteristic is a very short, rounded nose extension – in females, it is no more than a small snub nose. The rostral scale just below the rostral appendage is not integrated into the appendage. Males wear a low casque (around 1.3 mm) and sometimes a dorsal crest with few conical scales, sometimes not. In a relaxed state, the males are broadly yellow and blue-banded on the body, the limbs are yellow-green and the head is light green. The females are mostly brown-beige-green marbled. All Calumma tjiasmantoi wear a dark stripe on both sides, which reaches from the nose over the eyelid to the casque.

The following photos show parts of the habitat of Calumma tjiasmantoi during the rainy season in Ranomafana. The rainforest here stretches over several canyons so that it is quite steep in some places. The ground is rocky and has dense undergrowth. The trees are partly huge and in many places completely overgrown by lichens and mosses. In the morning it is mostly foggy, and it never gets dry. That’s why the rainforest is so fantastically green and blooming. Calumma tjiasmantoi is not only found in the intact rainforest, but also at the edge of the rainforest in adjacent secondary vegetation. They prefer dense bushes to trees and preferably thin, narrow branches on shrubby plants.

In the following you will find some 360° pictures of Ranomfanas rainforests. With the mouse, you can turn in all directions. If you click on the Theta logo, the pictures will open in a separate window in an enlarged view. There you also have the possibility to view the pictures in full-screen mode. Have fun while watching it!