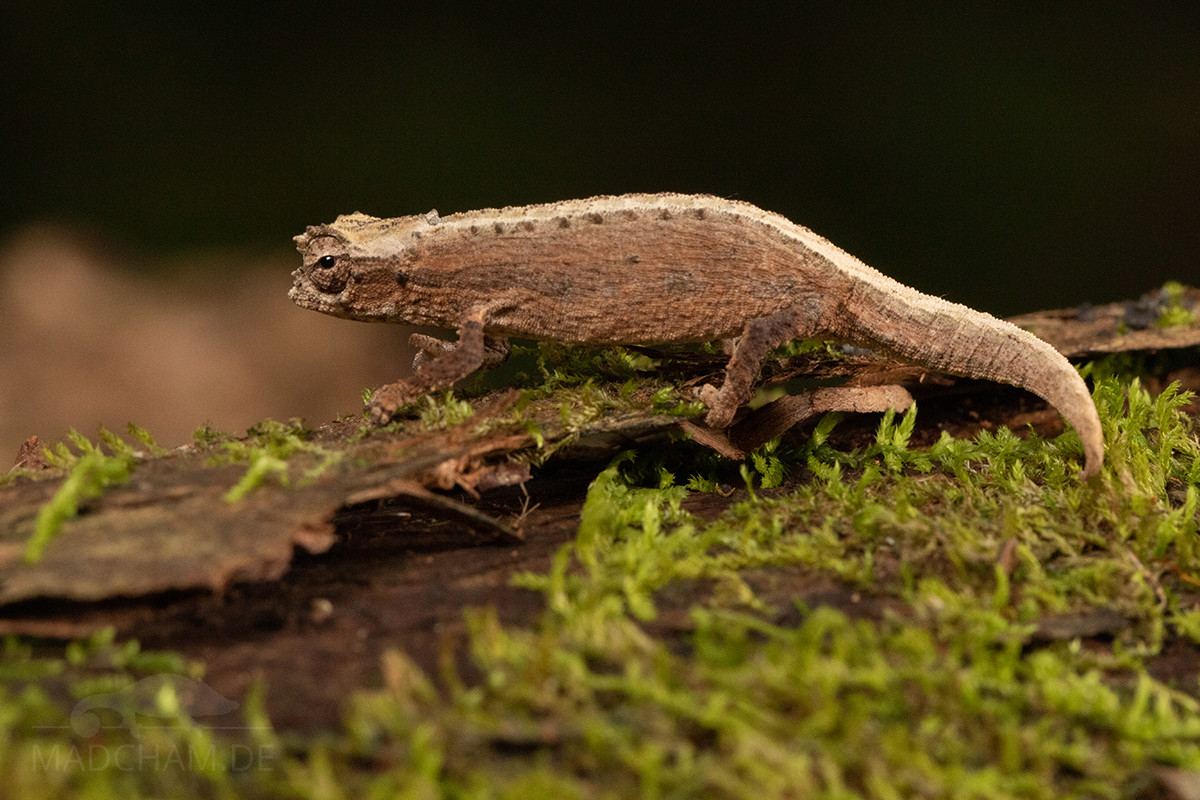 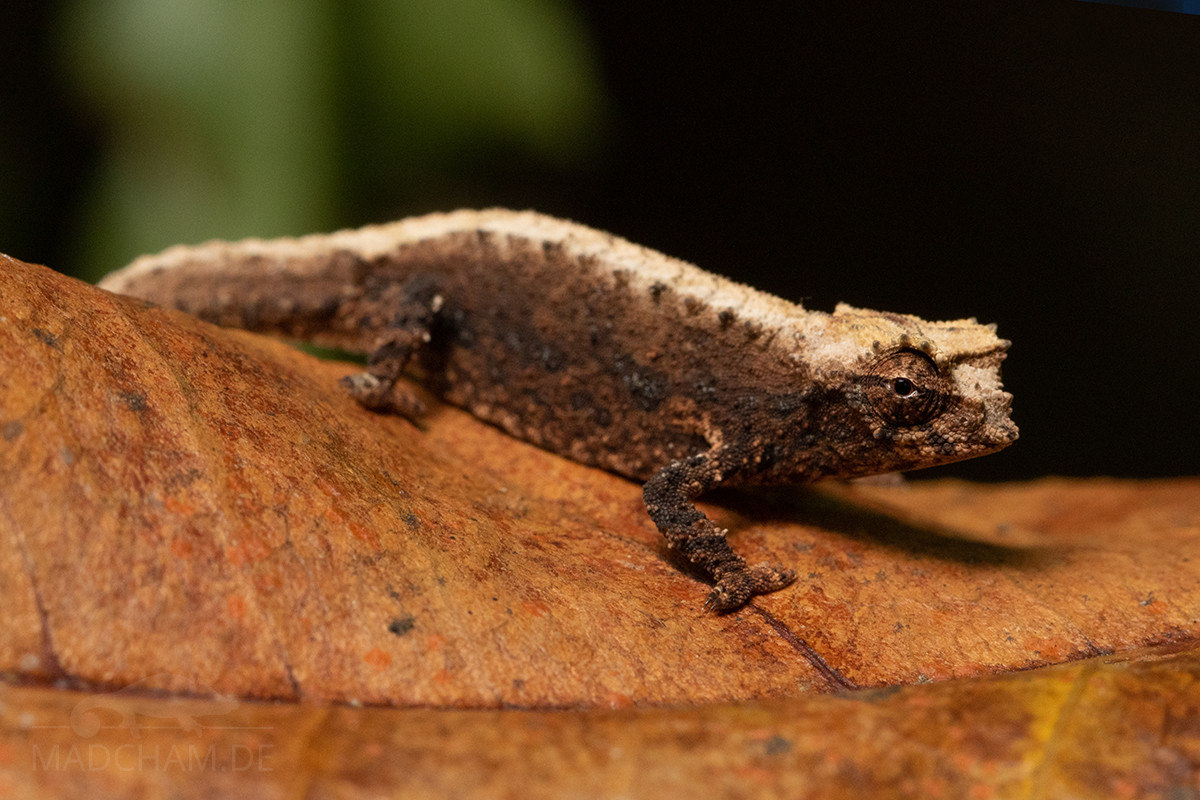 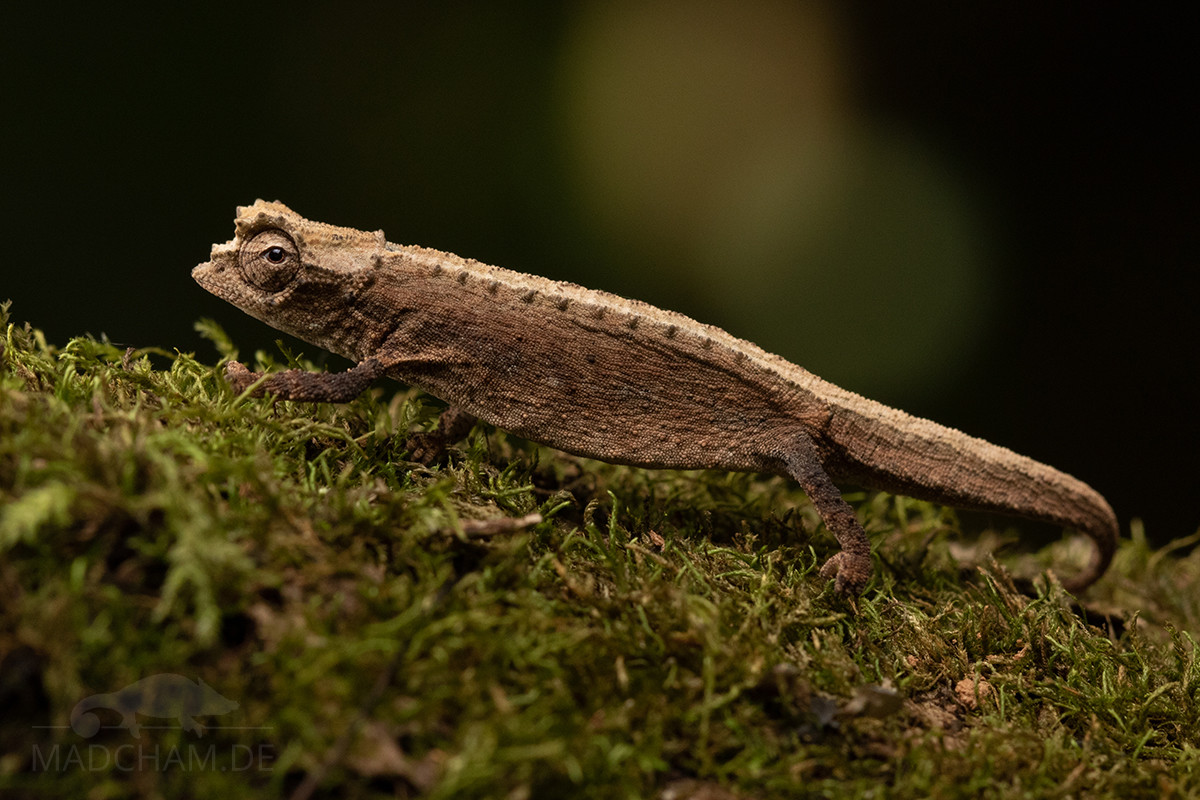 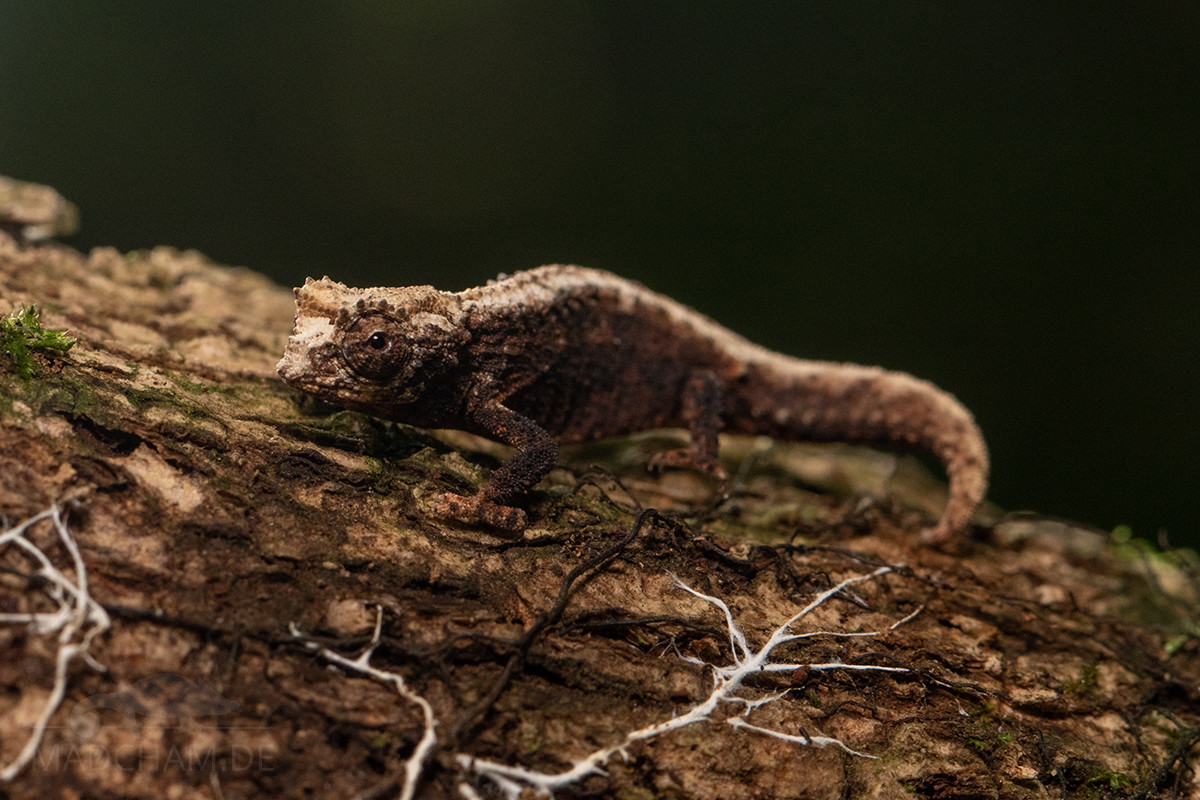 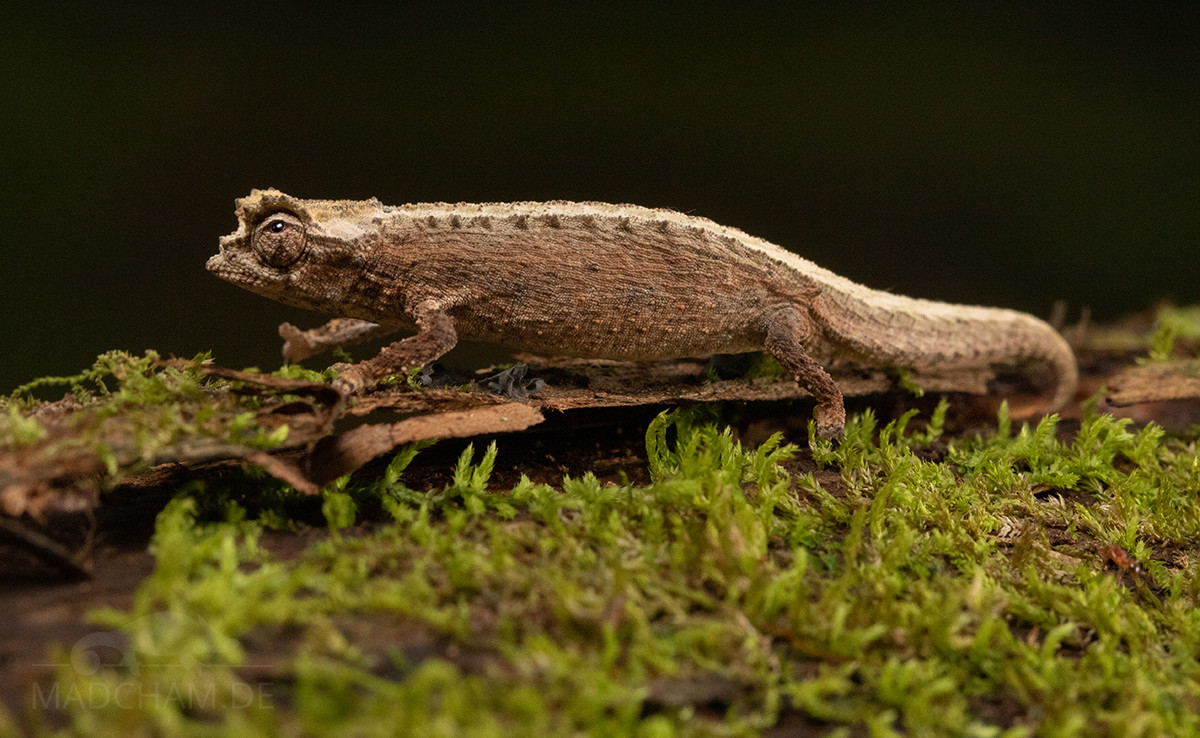 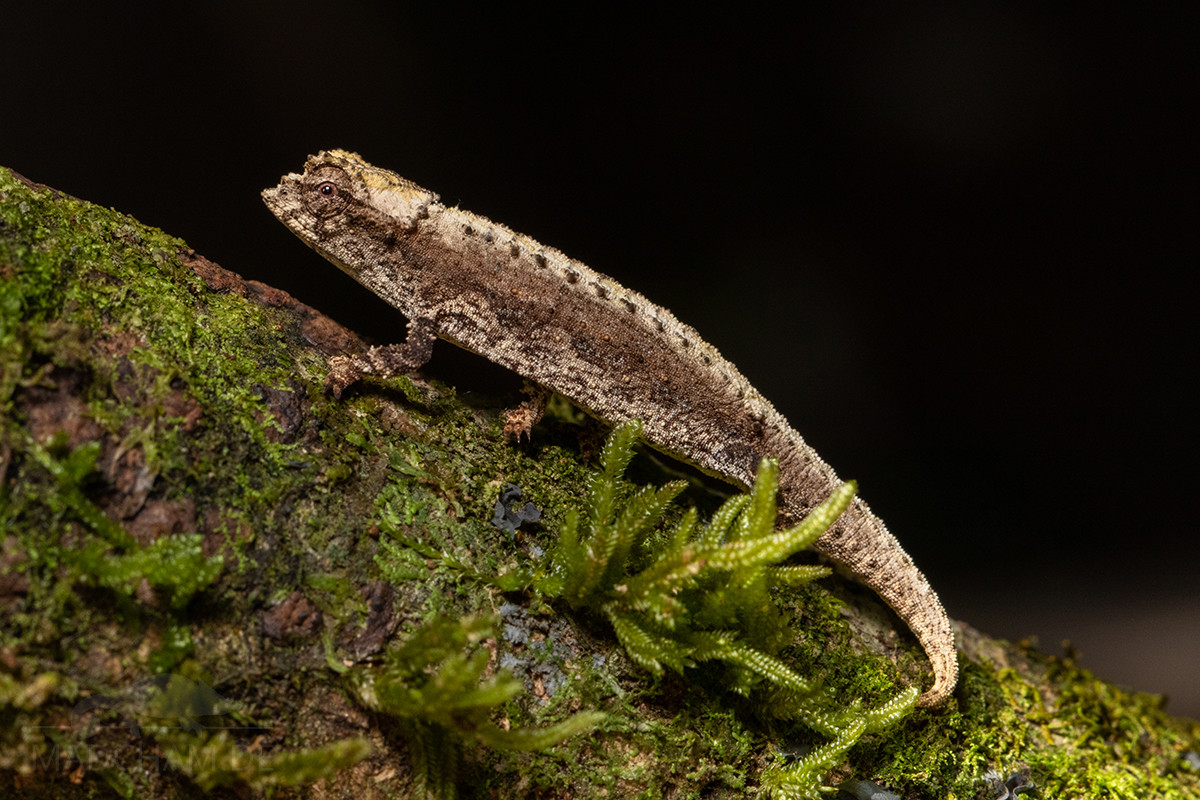 Frank Glaw from the Zoologische Staatssammlung Munich (Germany), Jörn Köhler from the Hessisches Landesmuseum Darmstadt (Germany), Ted Townsend from the University of San Diego (USA) and Miguel Vences from the Zoological Institute of the TU Braunschweig (Germany) described the species Brookesia desperata at the same time as several other, similarly small Brookesia species. Of these newly described species, the chances of survival were already lowest for Brookesia desperata at the time of description, since the species lives in a forest that is only very poorly protected and massively threatened by slash-and-burn and deforestation. Accordingly, the Latin desperatus was chosen as the species name, which means desperate.

These tiny chameleons are found only in the Forêt d’Ambre or Amber Forest, a piece of forest north of the better known Amber Mountain National Park. If you drive to Amber Mountain, you will pass the Amber Forest at about 470 meters. The nearest village is Sakaramy. The Amber Forest has been officially protected as a special reserve since 1958, but in practice, this protection is not implemented. The edges of the Amber Forest are populated on the side of Joffreville (Ambohitra) and Sakaramy, so the forest suffers very much from deforestation and continues to shrink every year. Brookesia desperata, however, surprisingly occurs not only in the southern remnant of the rainforest but also at the base of more giant mango trees and other secondary vegetation at the edges of the forest. Even in banana plantations, the species has been found. 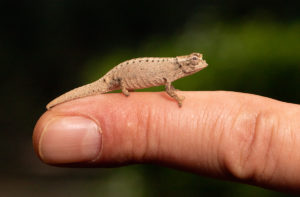 Size comparison: A Brookesia desperata on a human index finger

These very small terrestrial chameleons grow up to four centimeters in length, making them slightly larger than the nearby species Brookesia tuberculata, Brookesia tristis, and Brookesia confidens. On the sides of the head, they bear three small tubercles. Along the dorsum of both sexes run 12 to 14 lateral tubercles, which continue on the tail. Instead of a pelvic shield, Brookesia desperata bears a small pelvic spine. Females are somewhat broader and stockier than males, in which the relatively large hemipenis pouches are very visible. Colour-wise, Brookesia desperata usually show a conspicuously lighter dorsal line that extends from the head to the tip of the tail.

This chameleon belongs to the smallest amniotes worldwide, the so-called minima group.

Normally, the climate data of nearby cities do not necessarily coincide with the neighboring chameleon habitat. In the case of Forêt d'Ambre or Amber Forest, however, this is exceptionally different. Here, the climate in Joffreville, Malagasy Ambohitra, corresponds pretty closely to the climate of the "forest". For much forest is not there at all, it is more about tiny remnants of forest with mainly secondary vegetation in between.

The Amber Forest is located at 470 to hardly 1100 m, which makes it always quite fresh at night, but not quite as cold as in the slightly higher Amber Mountain. During the dry season, temperatures stay a bit lower, especially during the day, with up to 25°C. It rains here by far not as much as in the higher Montagne d'Ambre, but still more than "not at all", as is sometimes the case for months in Diego Suarez. During the rainy season, it occasionally gets up to 30°C during the day, but mostly it remains Mediterranean warm. The average temperature, however, is somewhat lower. During the rainy season, it pours several times a day, and sometimes for whole days.

Unfortunately, we have no ground temperatures for Amber Forest available yet.

The following photos show sections of the habitat of Brookesia desperata at the edge of the Amber Forest. These small chameleons live at the feet of larger trees, although they do not have to be jungle giants and primary forest. We have also spotted them at the base of mango trees and secondary vegetation as in the photos. The soil is a mixture of laterite and earth.