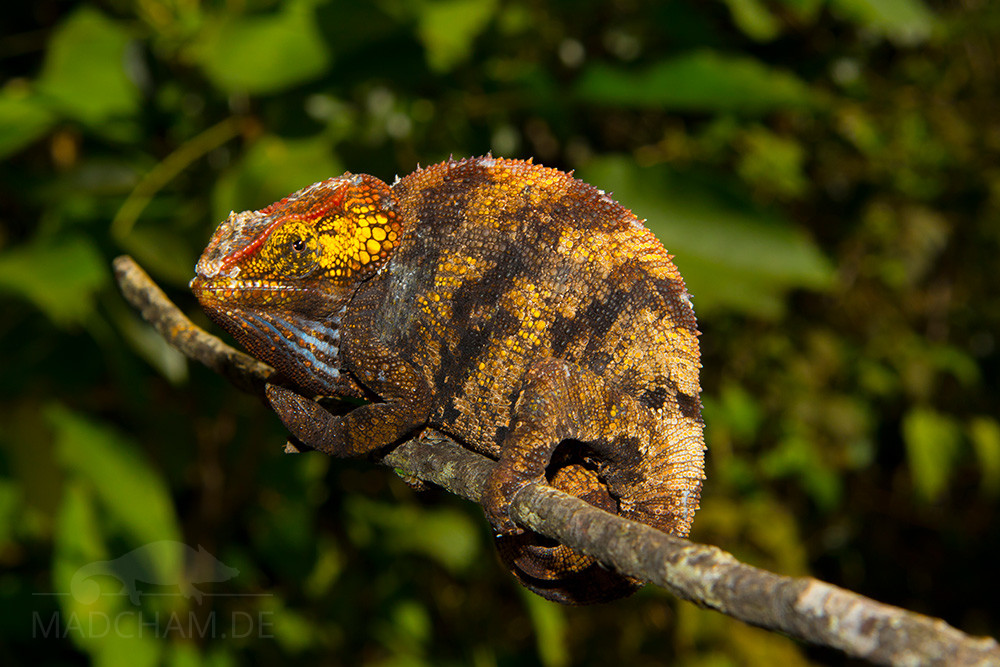 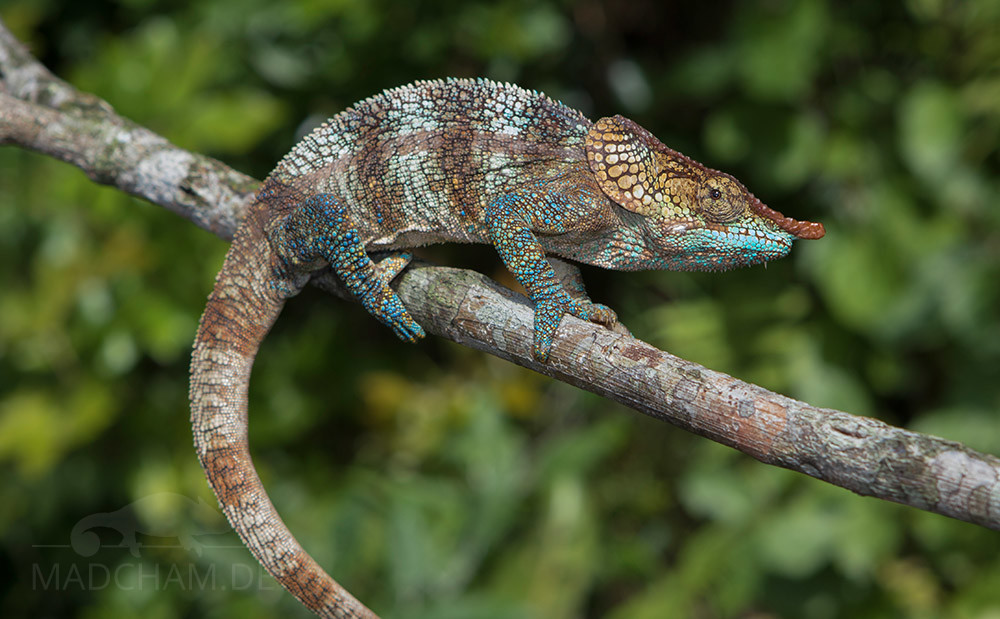 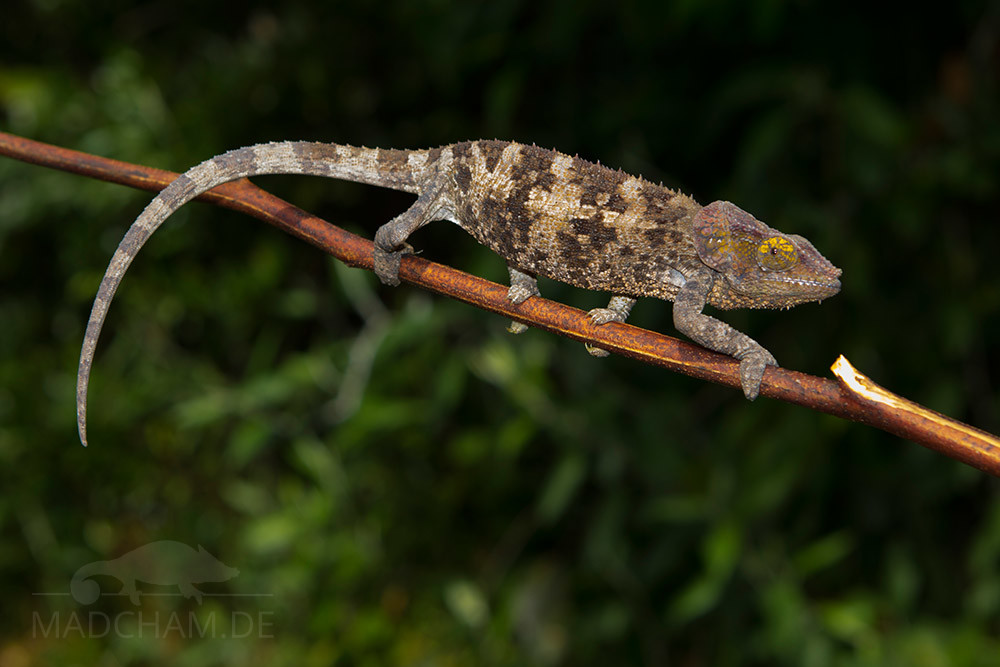 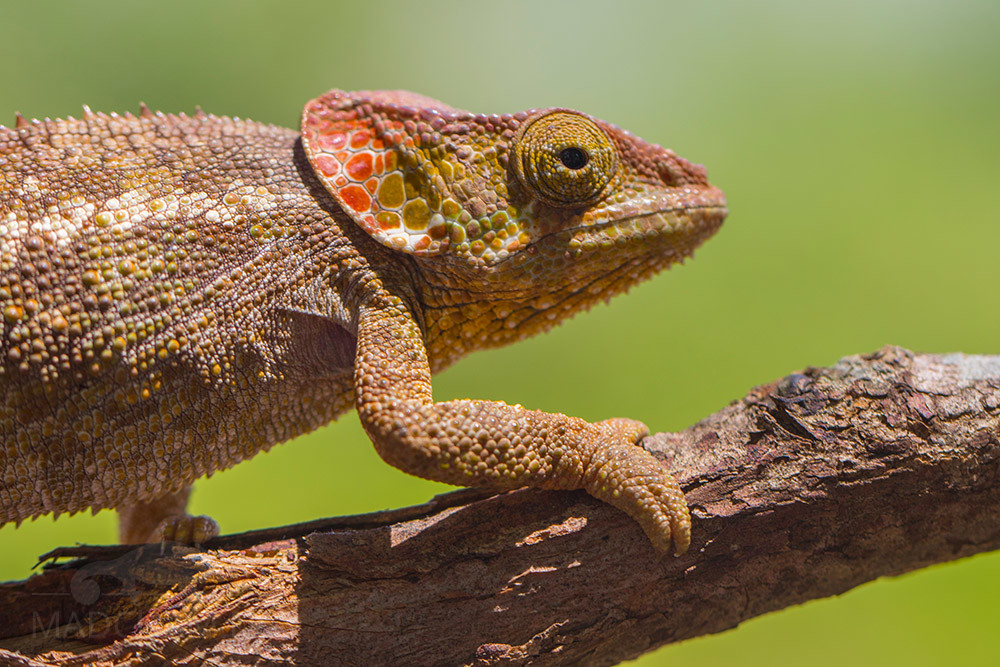 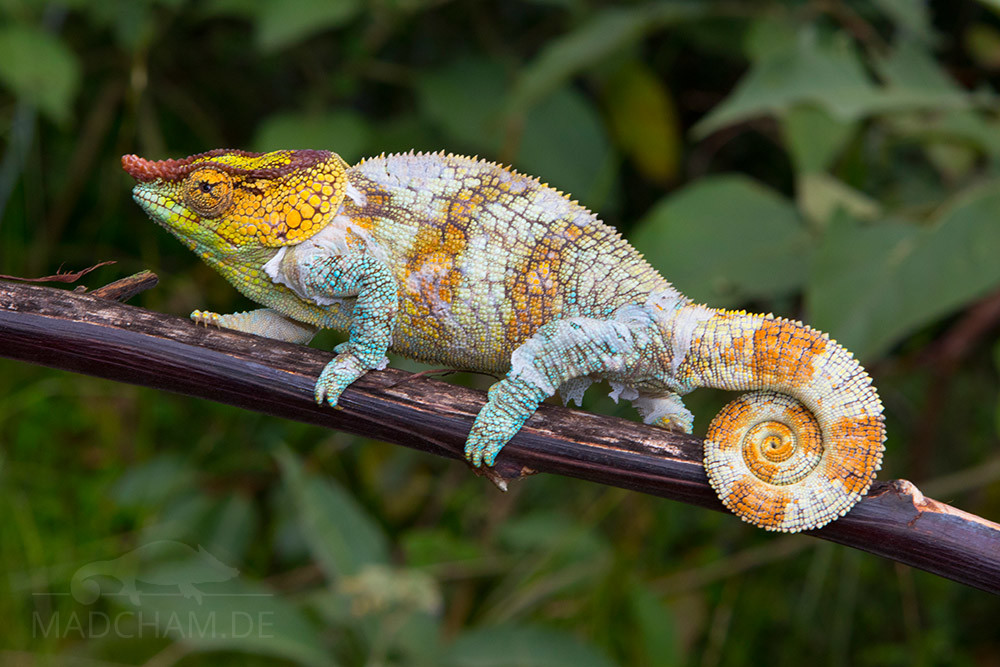 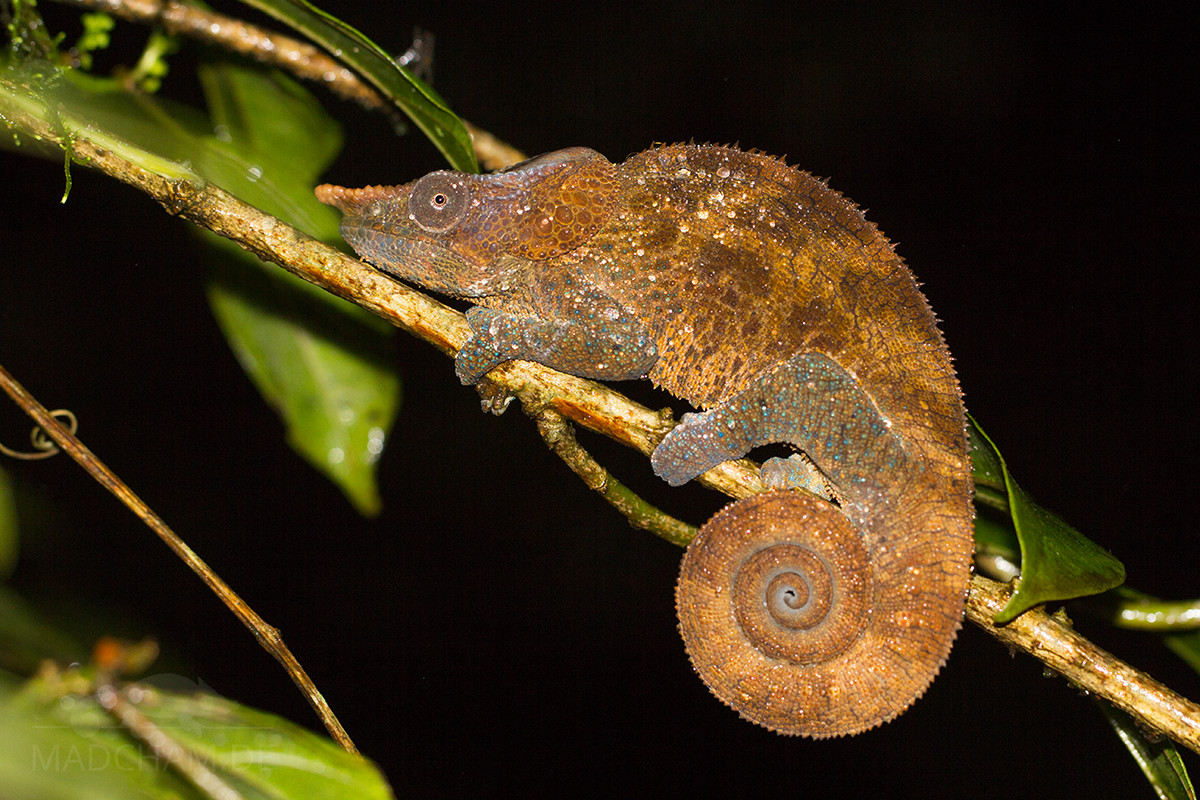 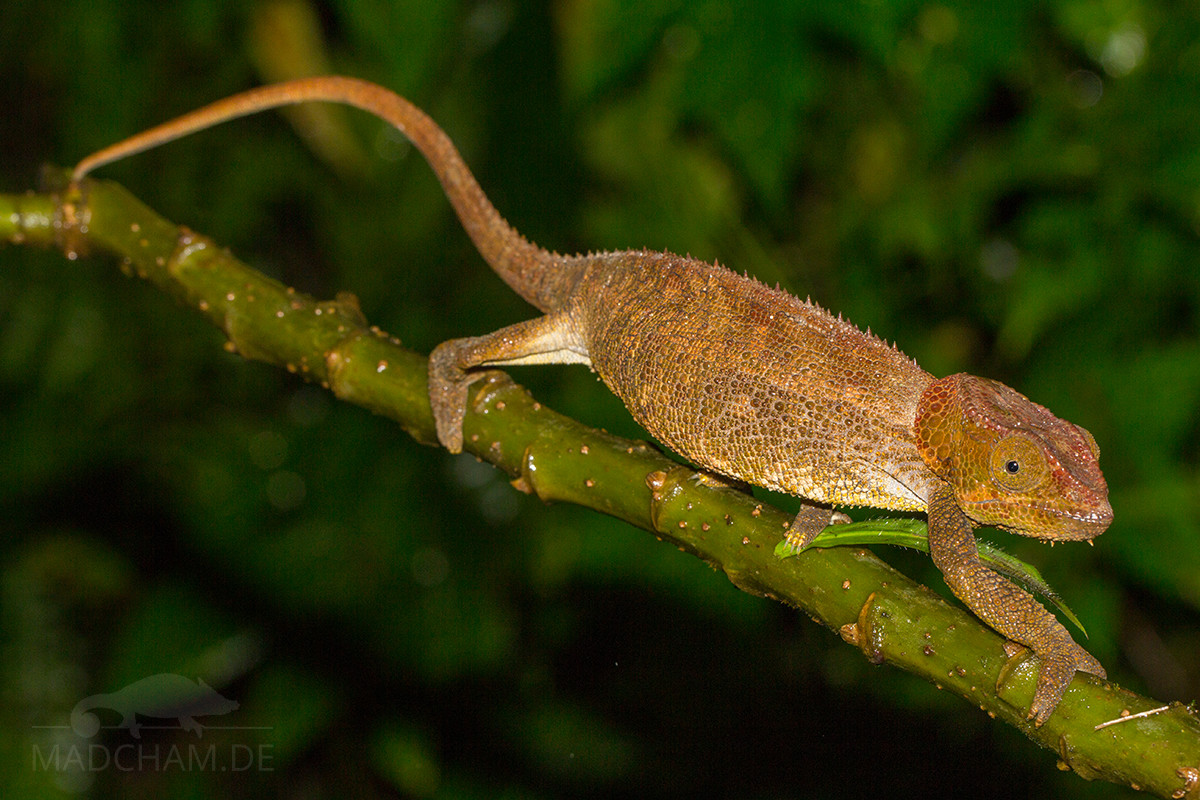 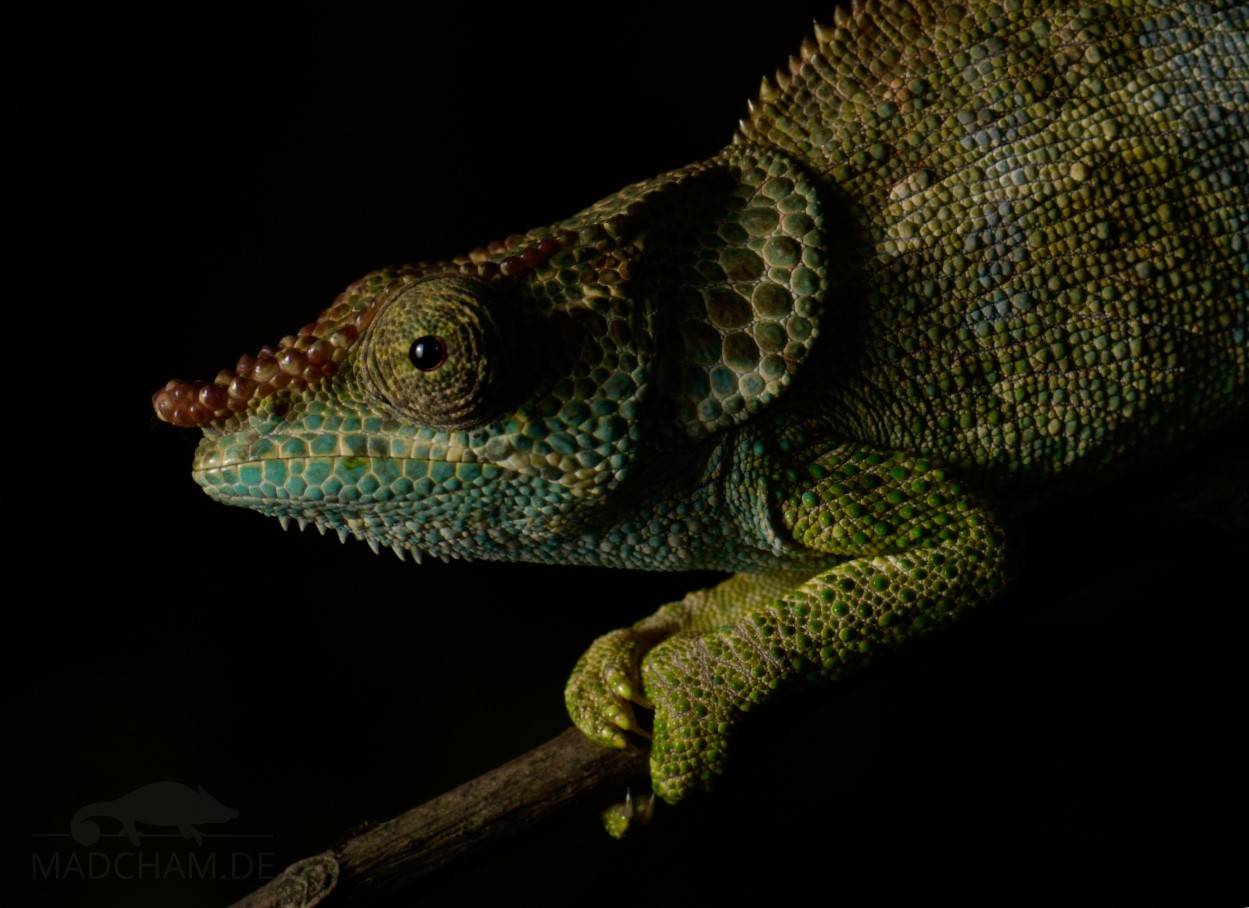 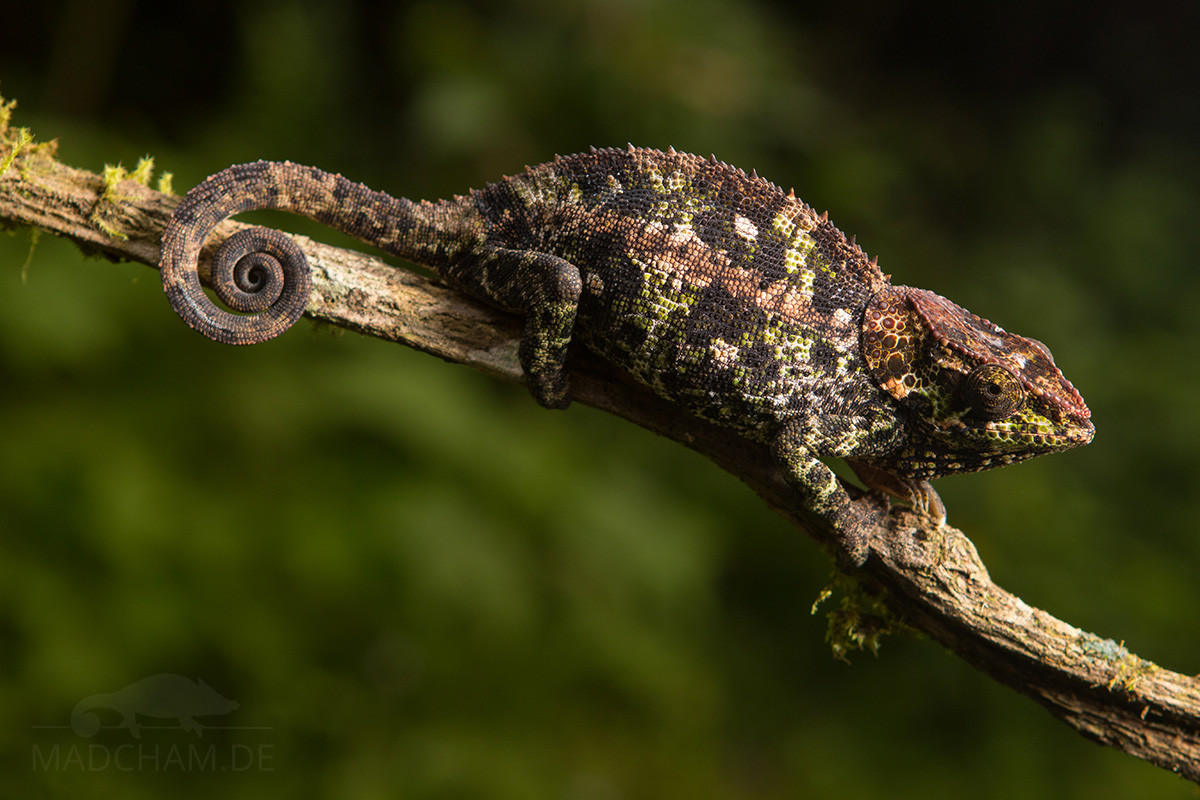 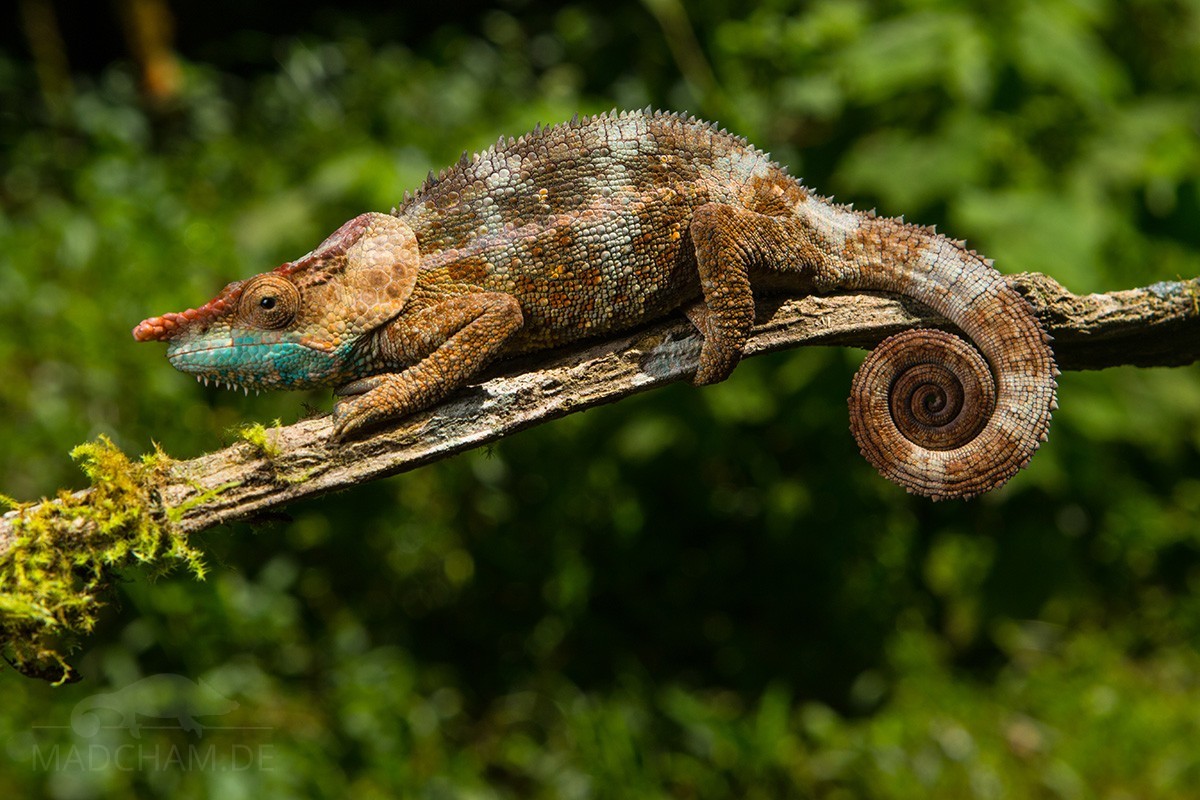 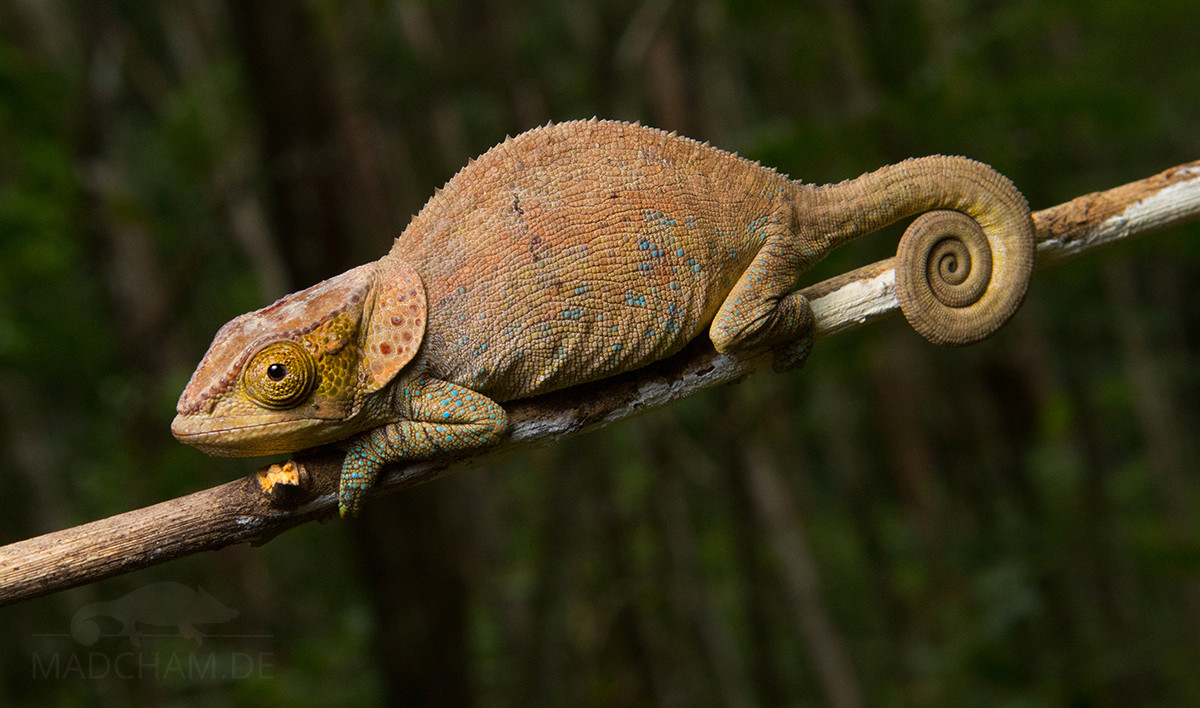 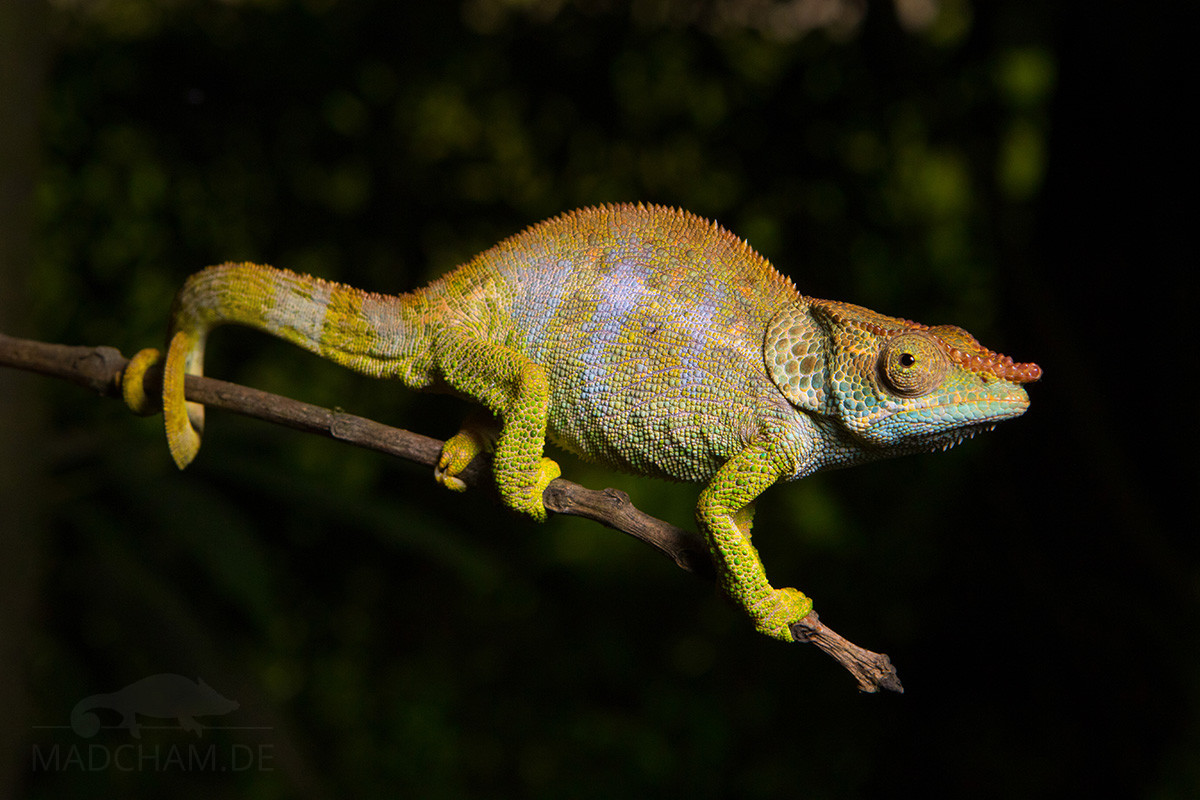 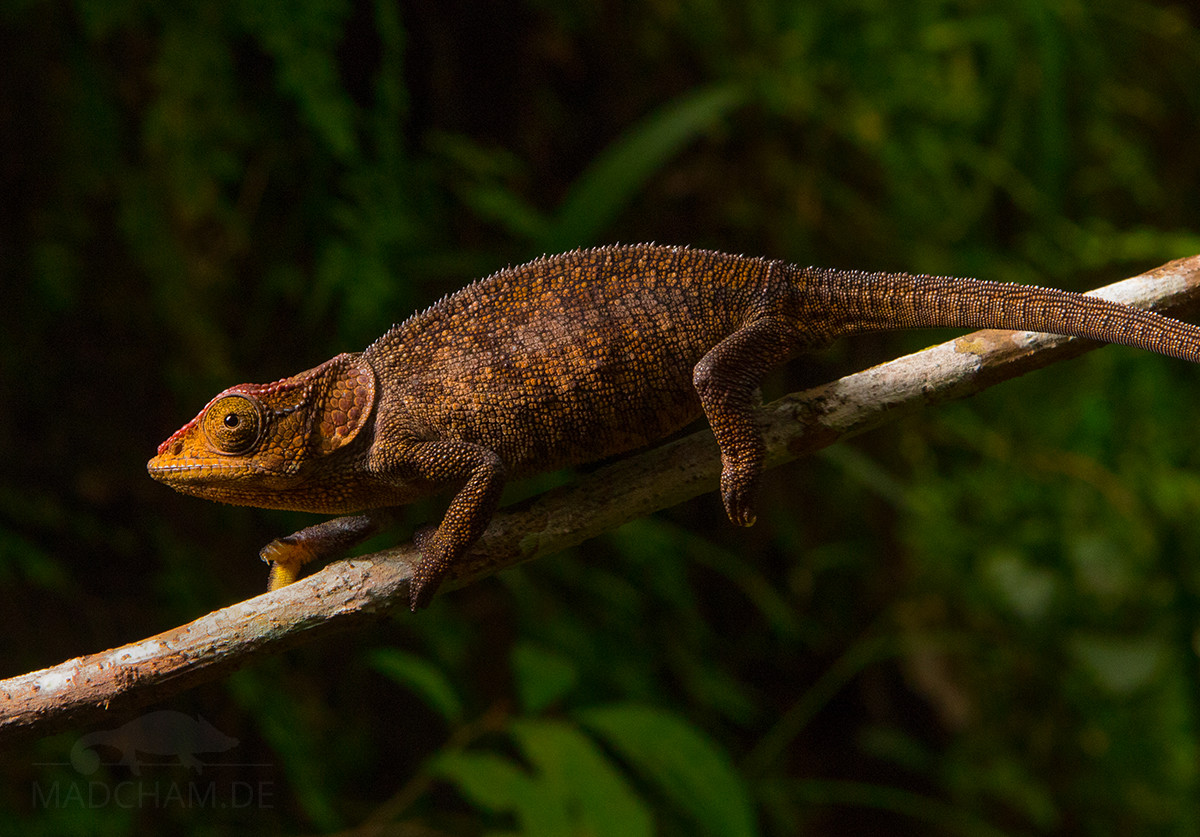 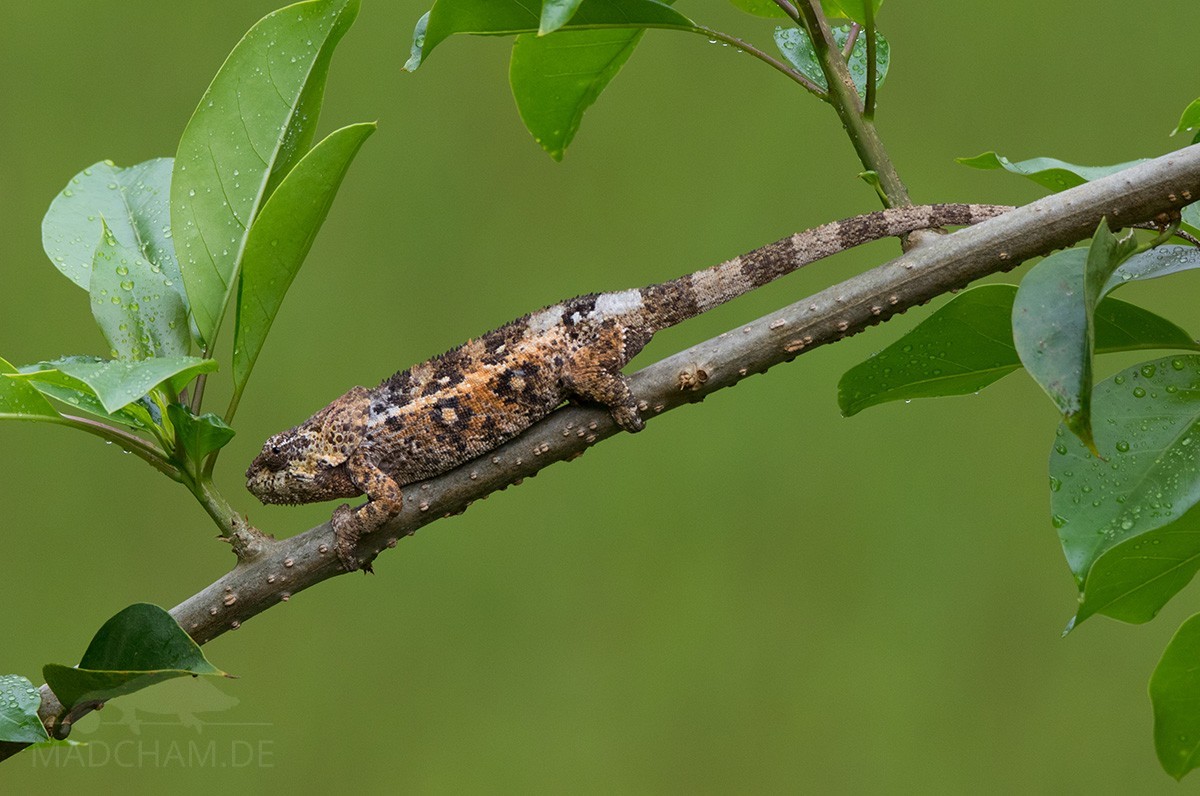 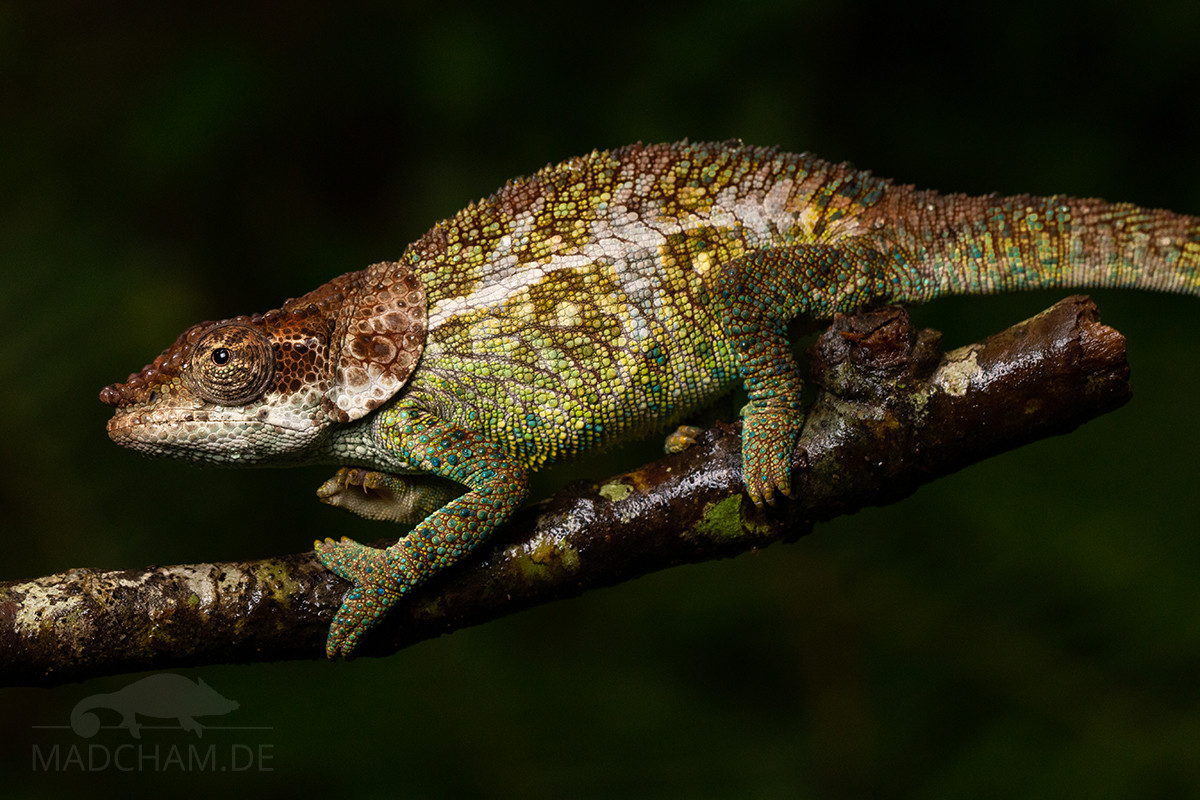 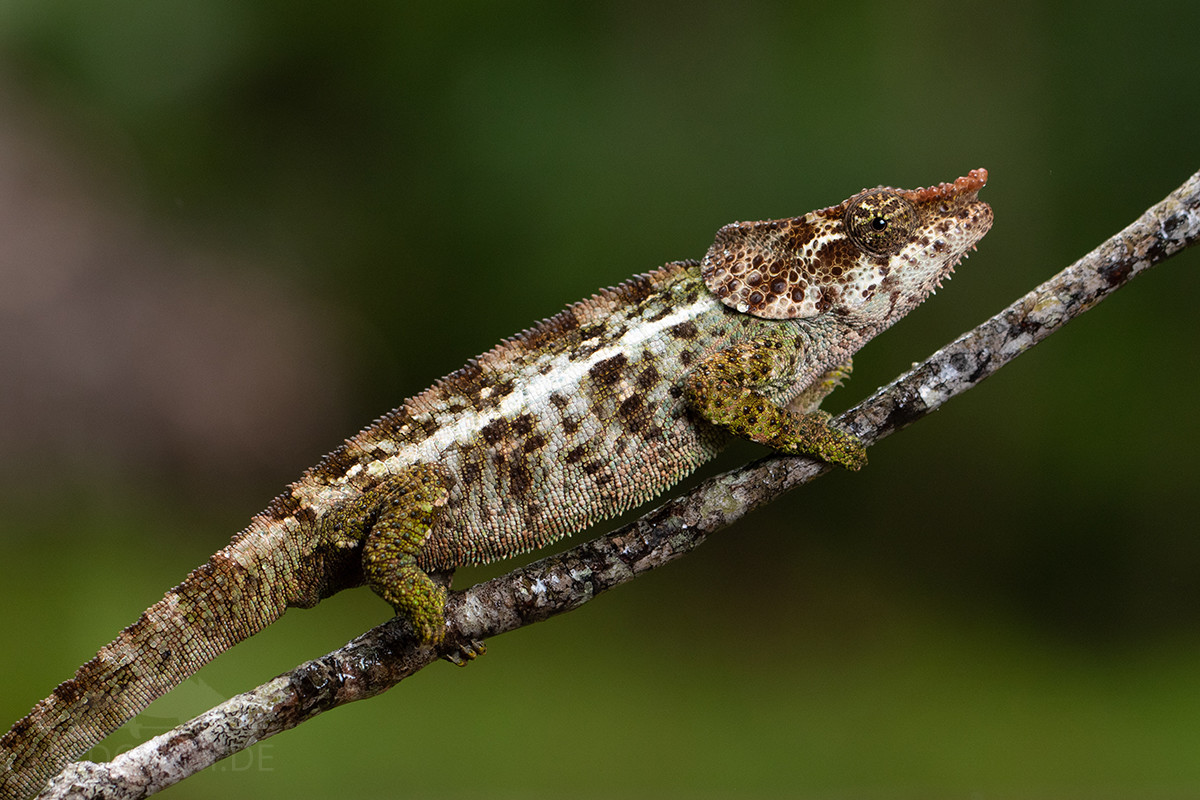 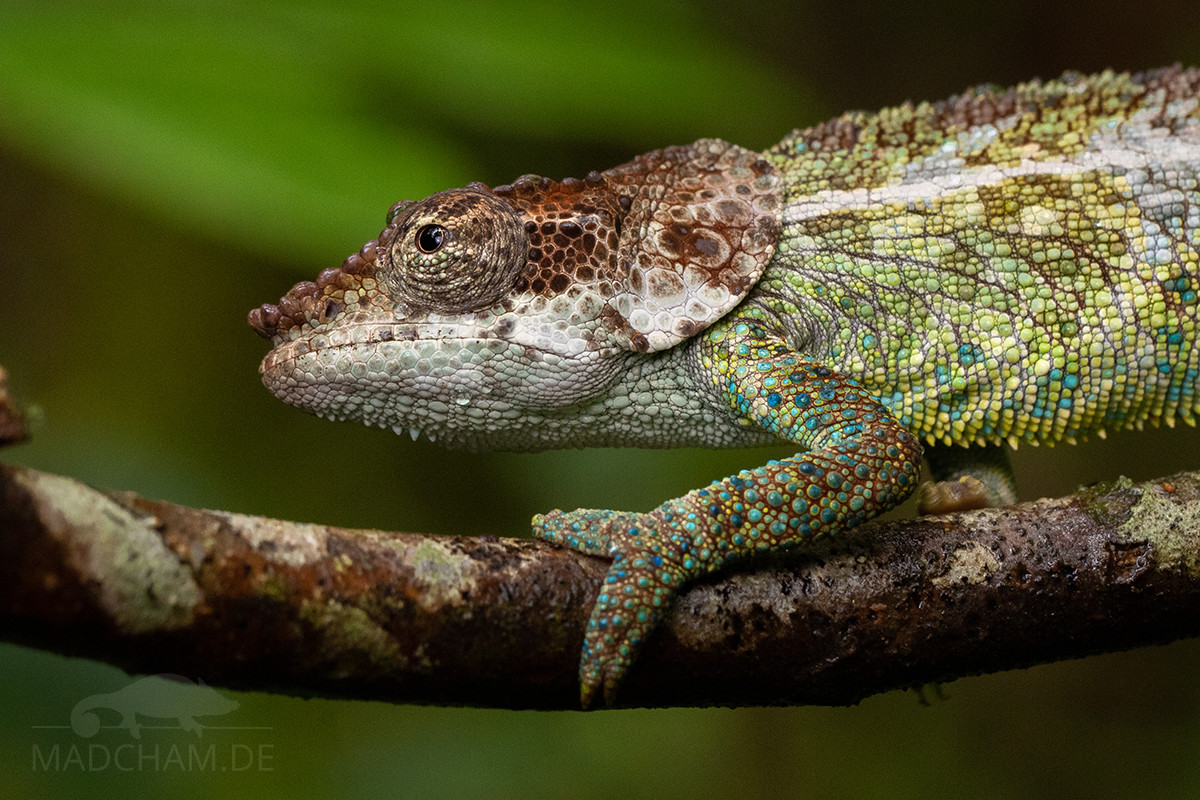 Christopher J. Raxworthy from the American Museum of Natural History, New York (USA) and Ronald A. Nussbaum from the University of Michigan, Ann Arbor (USA) borrowed the name of this chameleon species from English cryptic. It was intended to indicate the cryptic status of the species. Calumma crypticum had been counted among Calumma brevicorne for decades and despite the already optically visible differences – unrecognized as a separate species.

This species, also called blue-legged chameleon in English, only lives in the rainforest at elevations between 1000 and 1850 meters above sea level. Ranomafana, Andringitra and Andohahela national parks belong to their habitat as well as Tsaratanana massif and the area around Anjozorobe. You can find them best in the southern highlands in the forests around Ranomafana. Calumma crypticum prefers closed, dense forests as space to live. In 2016, we found animals in a region nearby Ambositra in the southern highlands for the first time. This population lives in a tiny, probably soon completely disturbed secondary forest with a size of less than 150 m². In 2017, only a single row of trees was still standing of it, and in 2019, only bushes were left. Due to a lack of habitat, this population will probably be gone before anyone can do research to do further examinations on these animals. According to literature, Calumma crypticum does not occur in this area.

With a total length of approximately 40 cm in males, Calumma crypticum belongs to Madagascar’s larger chameleons. They look very similar to Calumma brevicorne: Males have distinct nose appendages that are laterally compressed, both genders wear distinct occipital lobes, and a dorsal crest with small cone scales. Males of Calumma crypticum are amazingly colorful, which makes them easy to distinguish from other species: The legs shine bright blue, and some individuals have blue accents along the whole body. Females are less conspicuous with their marbled brown color and yellow accents. The following pictures show some juveniles. 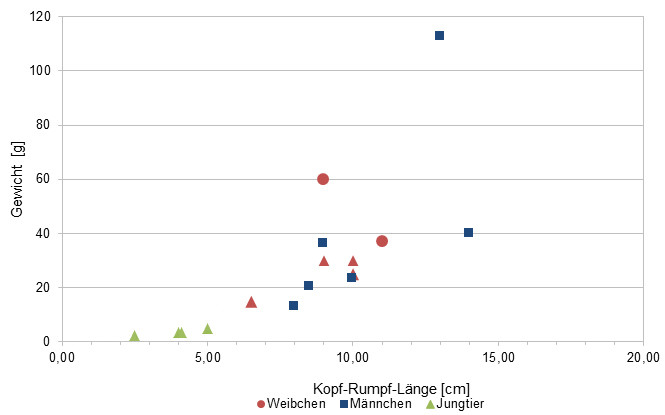 Since 2017, we measure the weights of Calumma crypticum that we find in Madagascar, of course only if practicable with calm animals (and working scales). Up to date, we have only a few weights. Over the long term, we want to get an average weight in proportion to the snout-vent-length (measured from the tip of the nose to the cloaca) from a large number of measurements for each Madagascan chameleon species. It is important to know that weights were all measured at the end of the rainy season when the chameleons have been having the highest food supply of the year. So our table may show the maximum weights of chameleons in Madagascar. Triangular symbols in females mean not pregnant, spherical symbols mean pregnant.

The following pictures show the habitat of Calumma crypticum near Ambositra as well as in Anjozorobe and Ranomafana. The finding place near Ambositra has been almost completely cut down in 2017. In Ranomafana, this species occurs in the intact rainforest with huge trees, lianas, and many ferns. The trees are quasi always moist and mossy overgrown. The forests extend over several canyons and are accordingly rocky, the soil is covered by foliage.

Hereinafter you can find some 360° pictures from Ranomafana. You can move inside these pictures via mouse click in all directions. If you click on the Theta logo, a new window with an enlarged view will open. You will also have the opportunity to look at the pictures in full-screen mode. Enjoy!