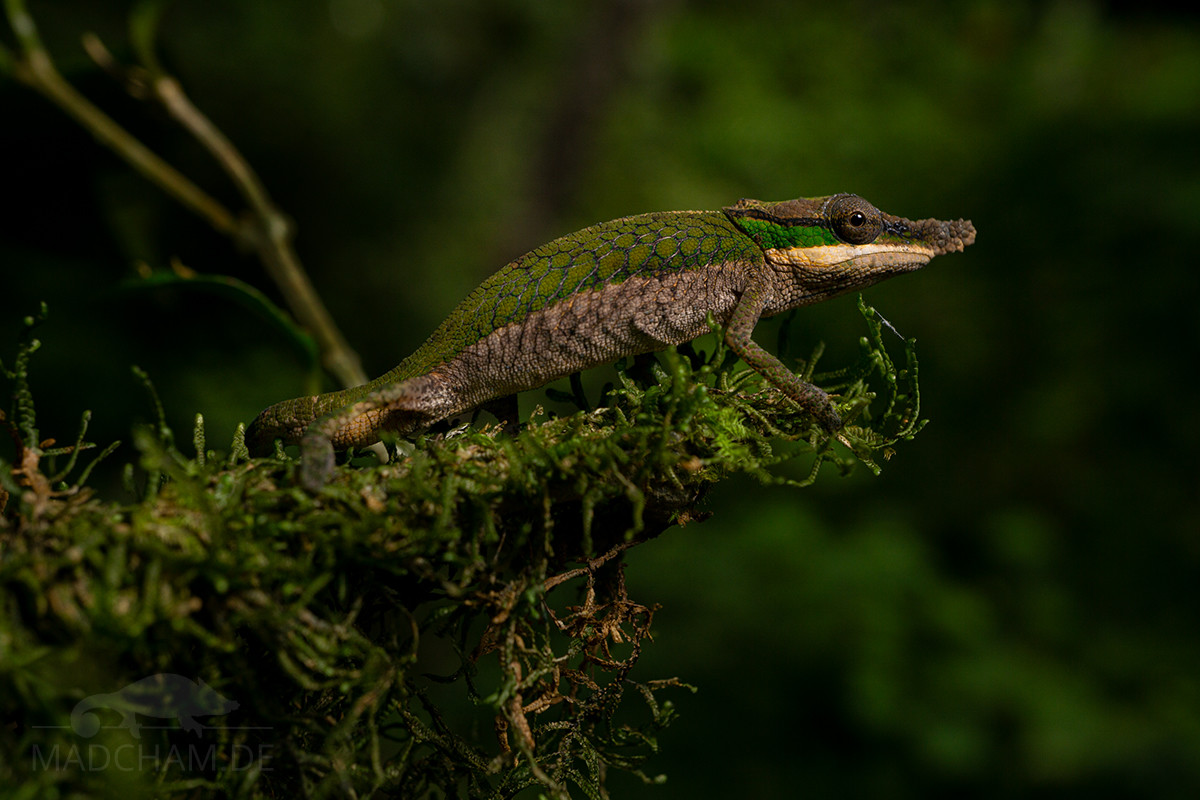 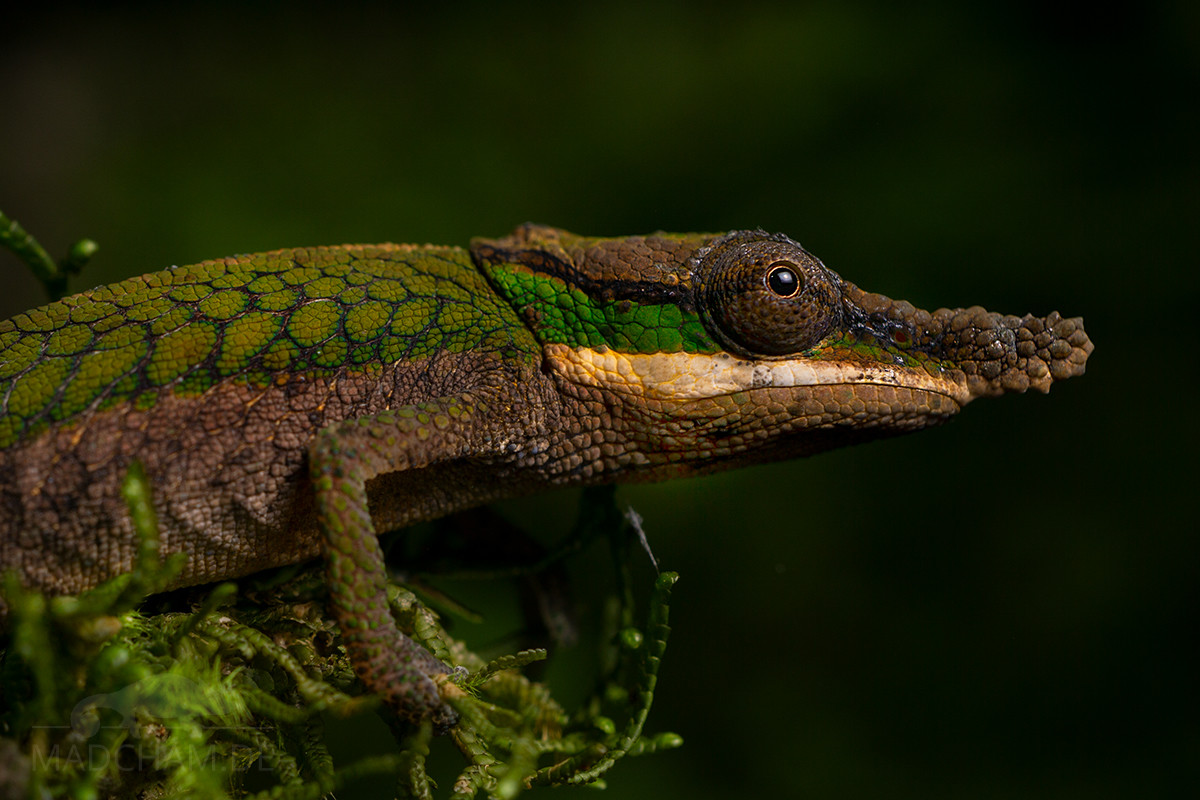 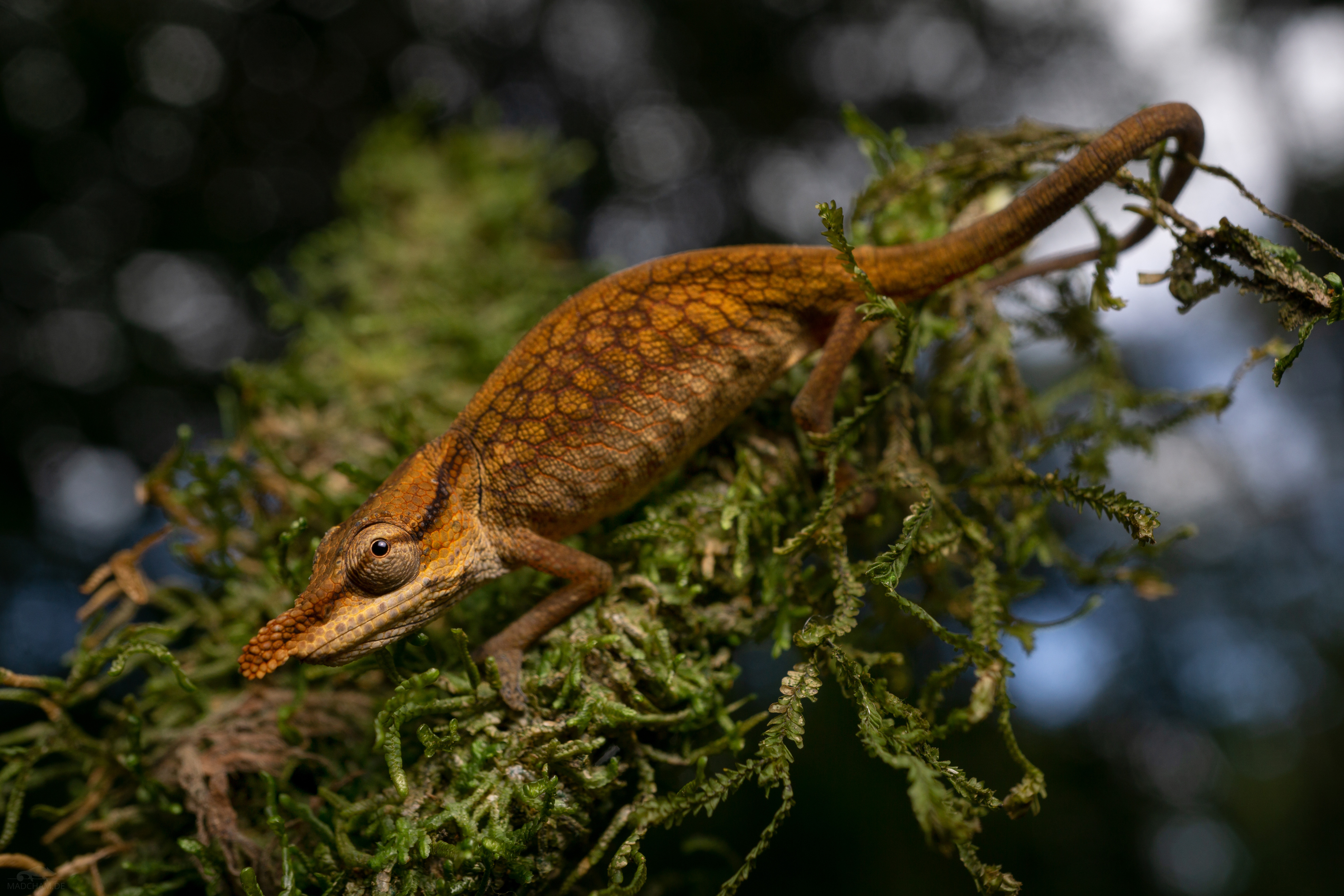 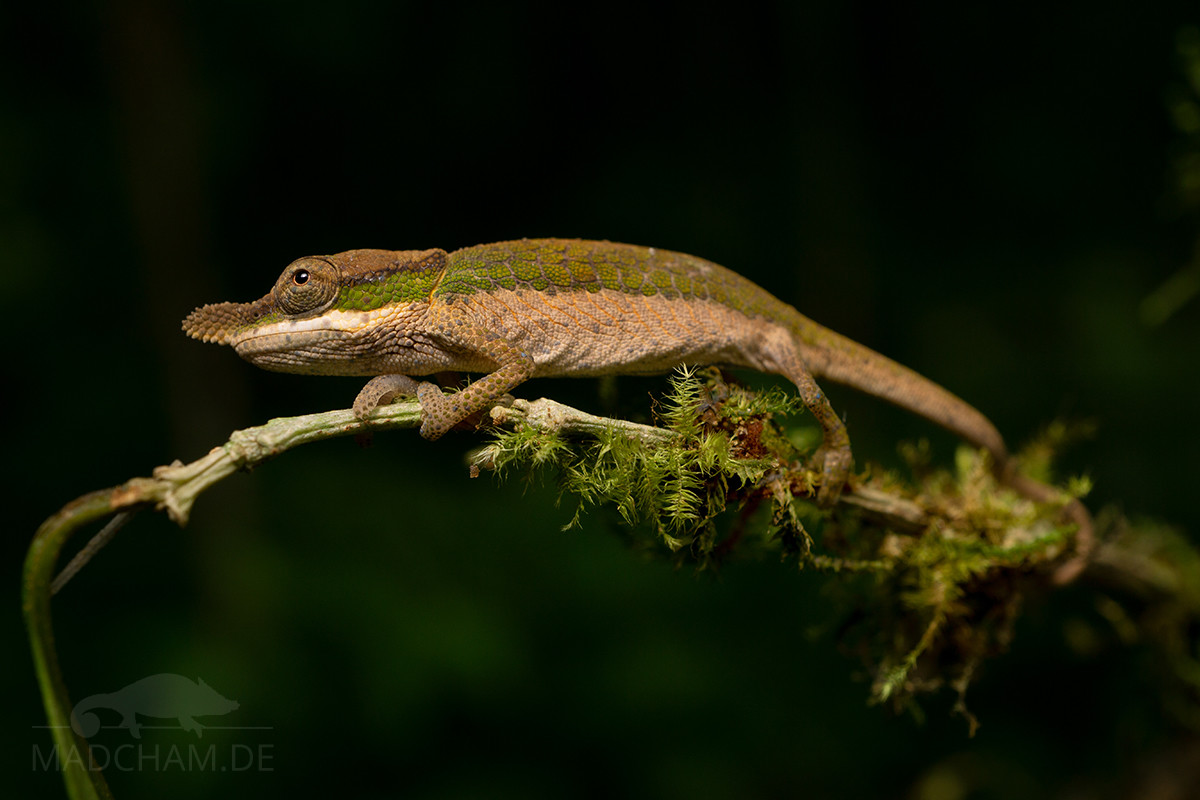 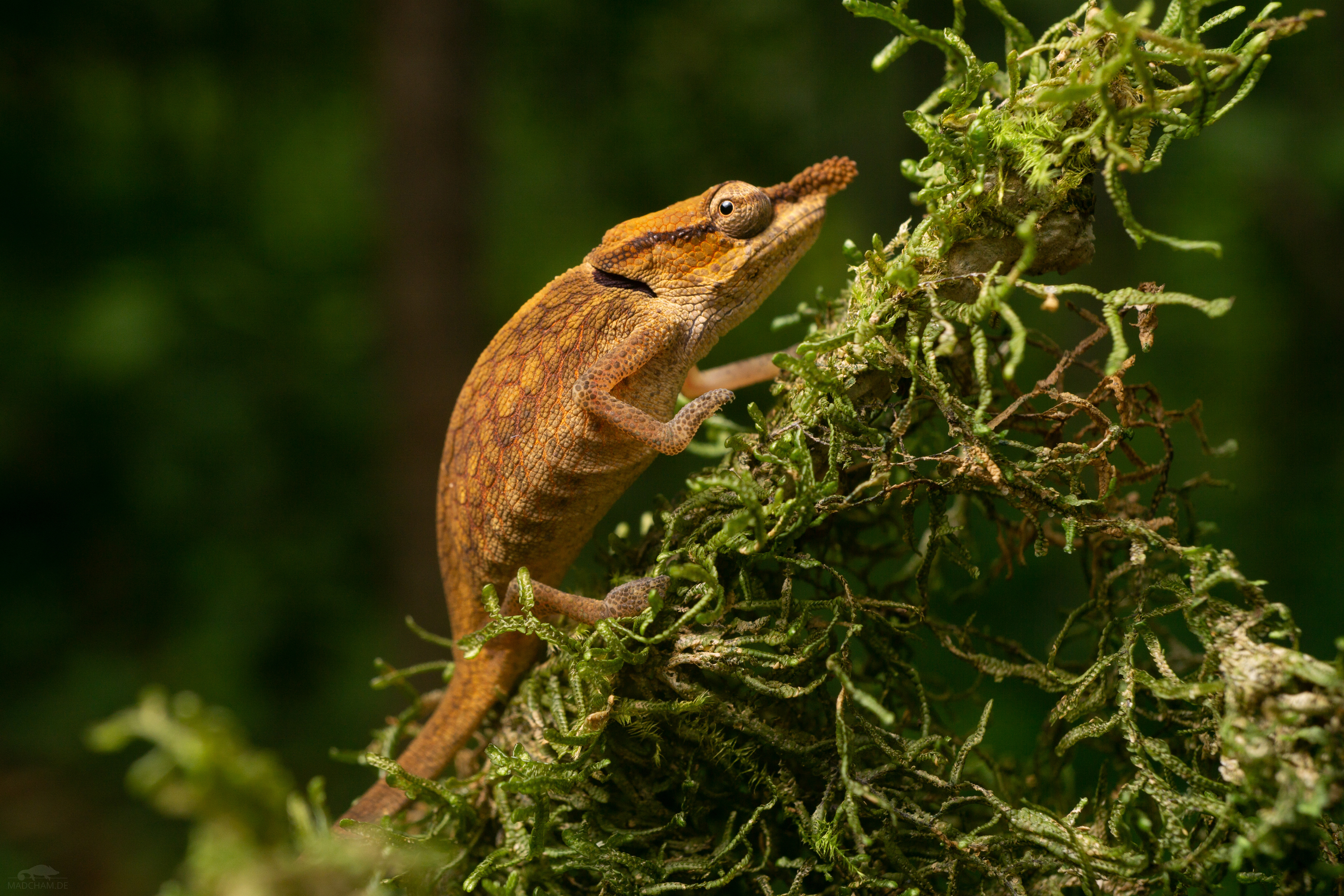 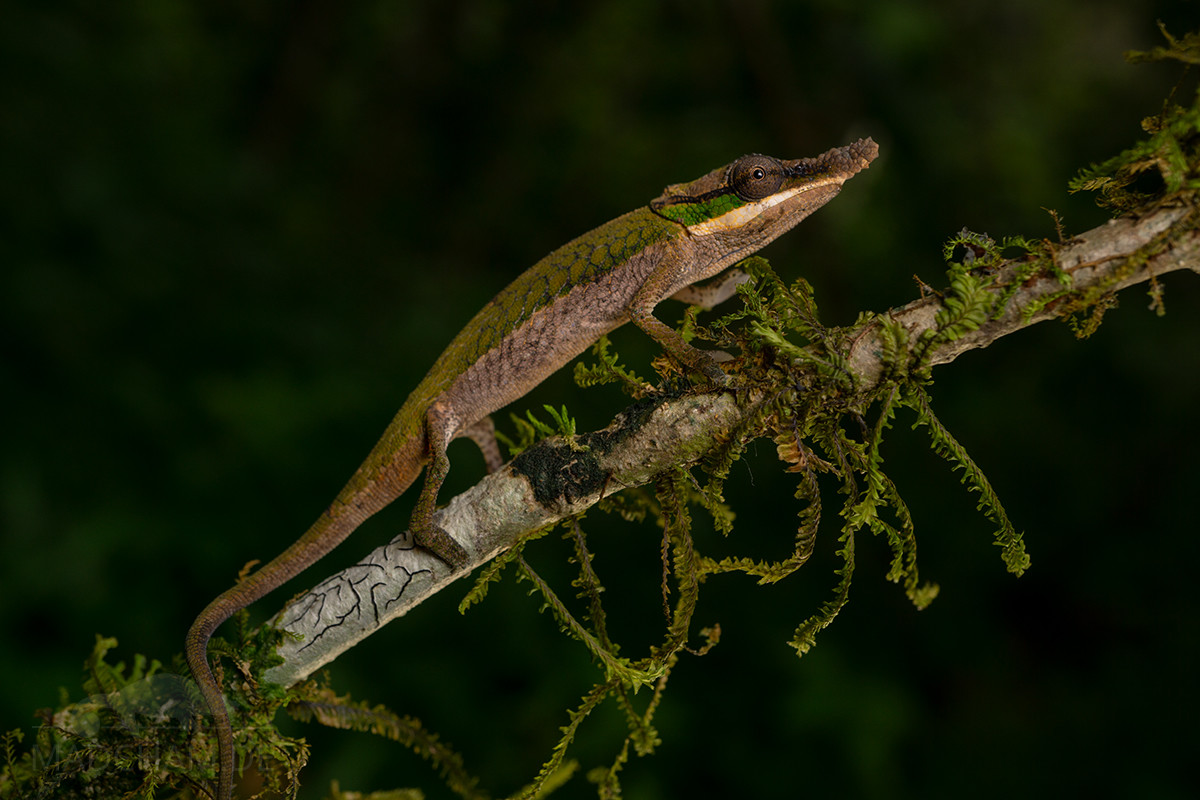 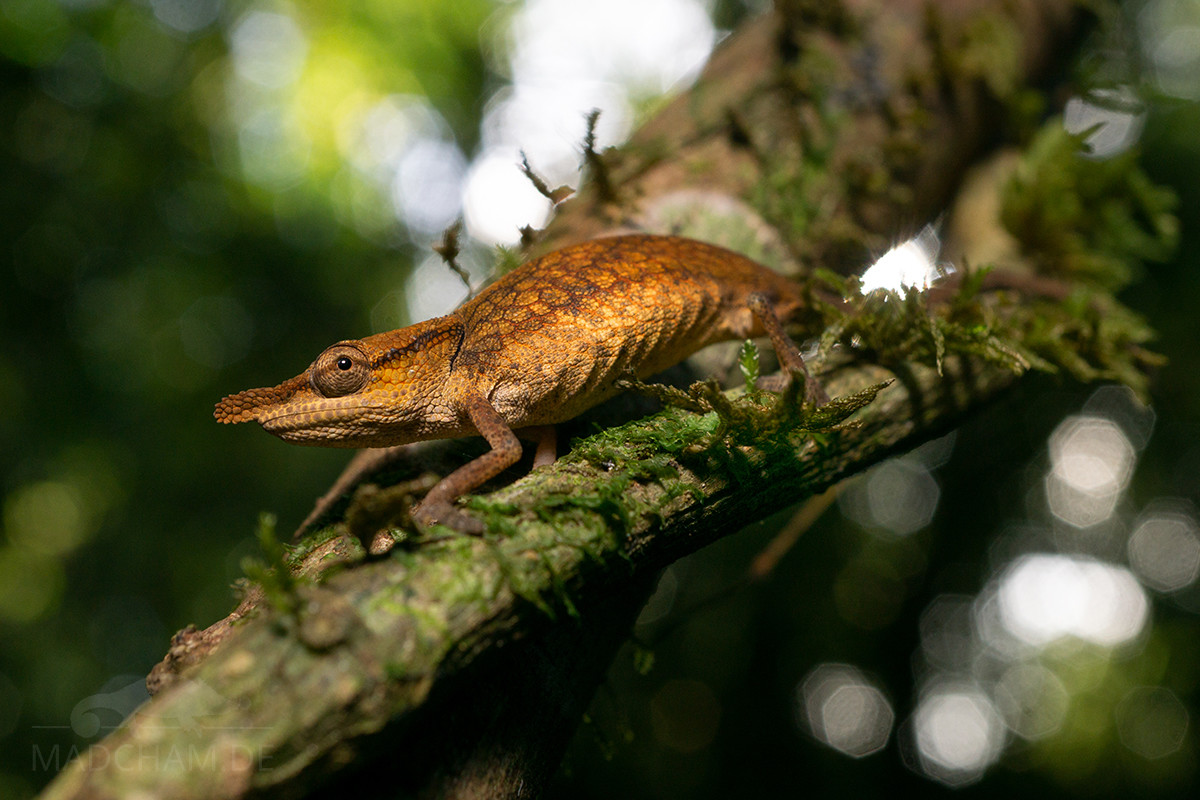 This recently described chameleon species is only known from a small strip of rainforest near Vohidrazana in central-eastern Madagascar. The small forest area belongs to the rainforest corridor of Ankeniheny-Zahamena and is unfortunately very threatened by deforestation and slash-and-burn despite protection efforts. Vohidrazana is a bit remote and it takes a few hours to walk uphill on narrow paths to get there from Route Nationale 2 from direction Andasibe. Accordingly, the forest is rarely visited by travelers.

The main characteristic of the species is its size: With a total length of only 9.4 cm from the tip of the nose to the tip of the tail, Calumma roaloko is the smallest chameleon of the genus Calumma. The optically divided scaling is just as striking: In males, the upper half of the body is bright green, the lower half greyish-white to beige. The Malagasy name roaloko describes this phenomenon exactly: roaloko is Malagasy for “two colors”. The females of the species are also two-colored but in muted brown and beige tones. The nose of the females can be yellow.

In both sexes, a white stripe runs along the entire upper lip to the small occipital lobes, which connect to the flat helmet and show a small indentation in the middle. Both also have a dark stripe running across the eyelids and a flexible, soft nasal projection. It is slightly more pronounced in males than in females. The dorsal crest is reduced to a maximum of two small conical scales in the front area, not present at all in many individuals.

The species was previously classified as Calumma nasutum. As has been known for some years, a whole series of partly undescribed species from the smallest areas of Madagascar hide under this species name.

The following photos show parts of the habitat of Calumma roaloko in the region around Vohidrazana. The species prefers very shrubby bushes and very dense, mossy branches. Probably the animals are more difficult for predators to catch due to their size and agility in such dense habitats.

In the following, you will find some 360° pictures from the region around Vohidrazana. With the mouse, you can rotate in all directions. If you click on the Theta logo, the images will open in an enlarged view in a separate window. There is also the possibility to execute the pictures in full-screen mode. Have fun watching it!