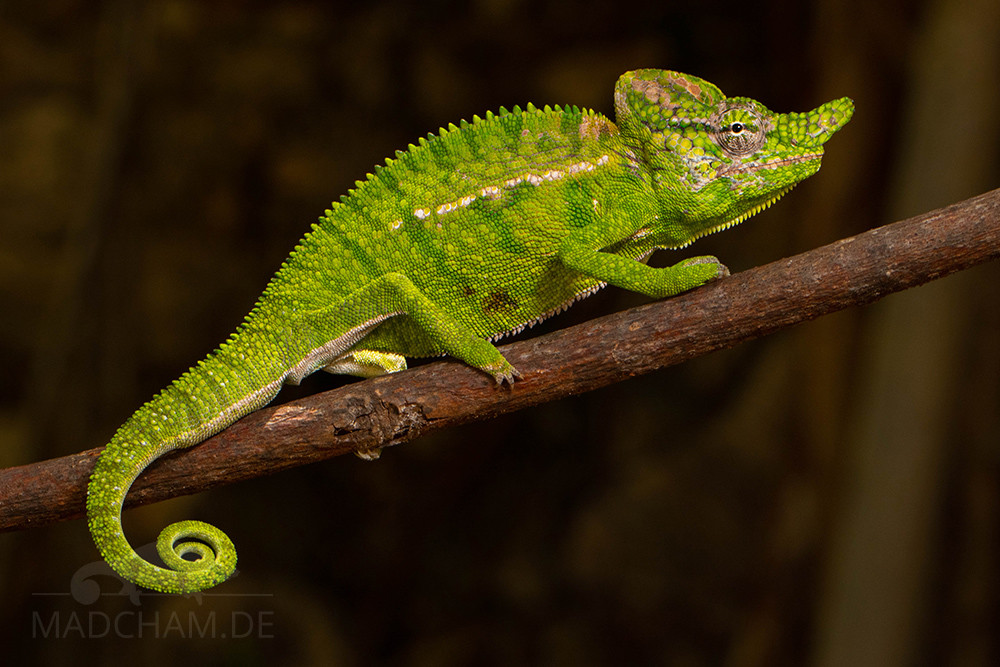 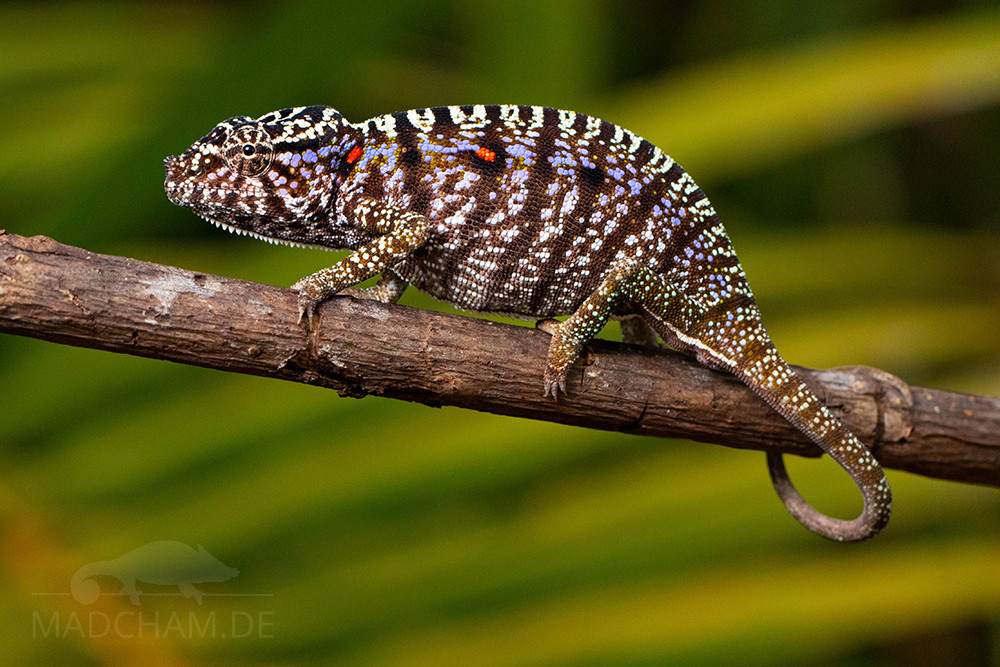 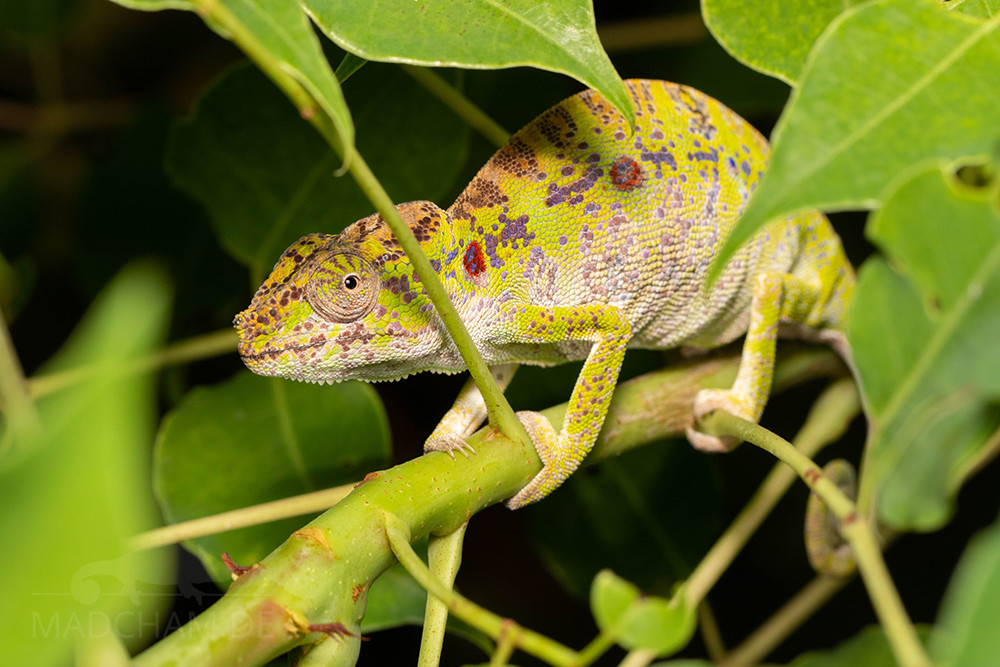 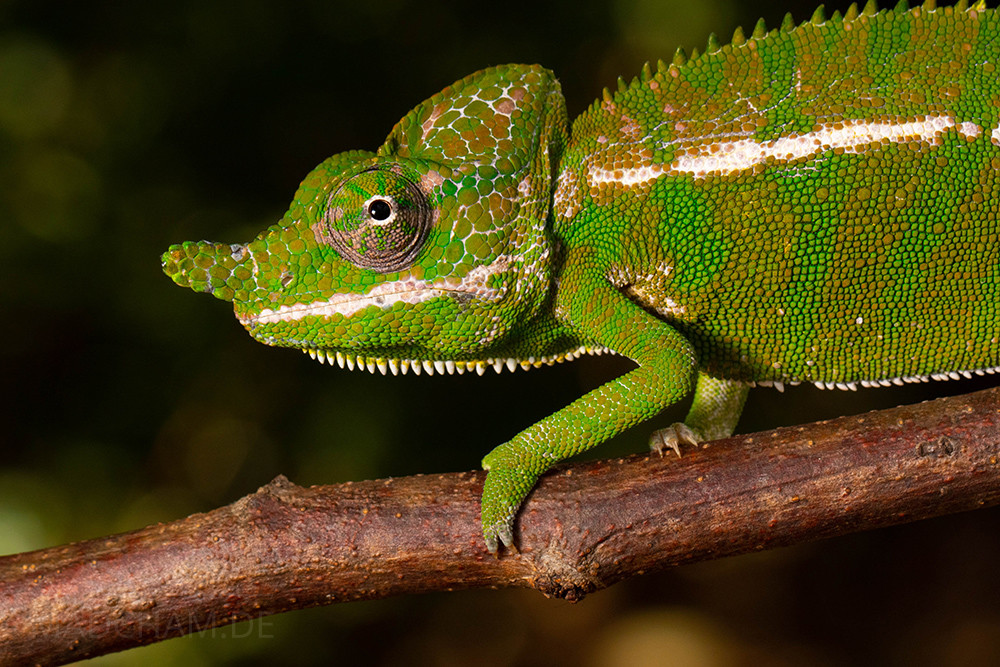 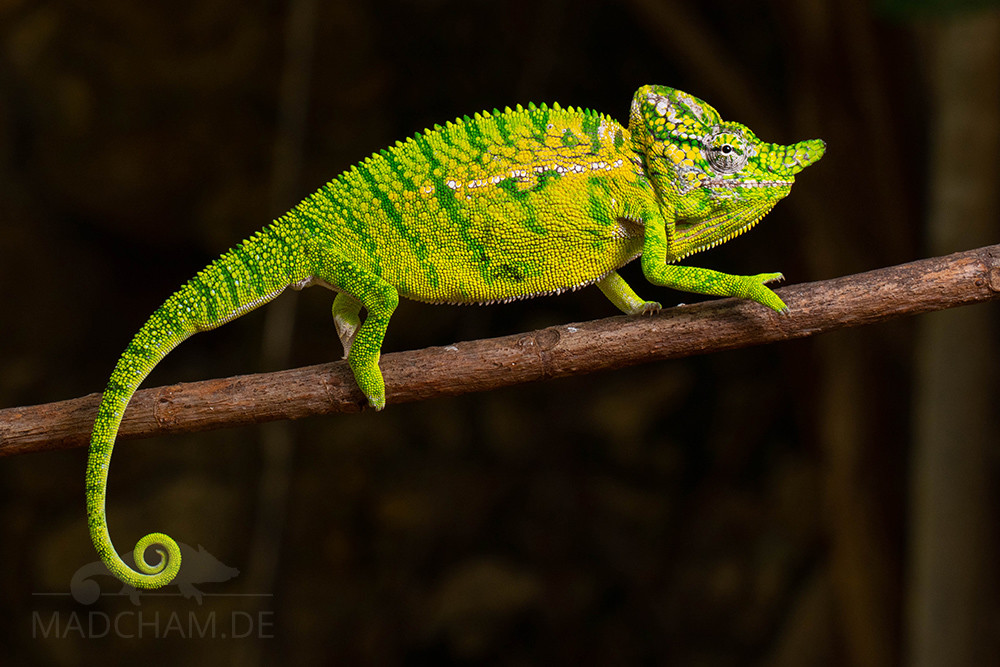 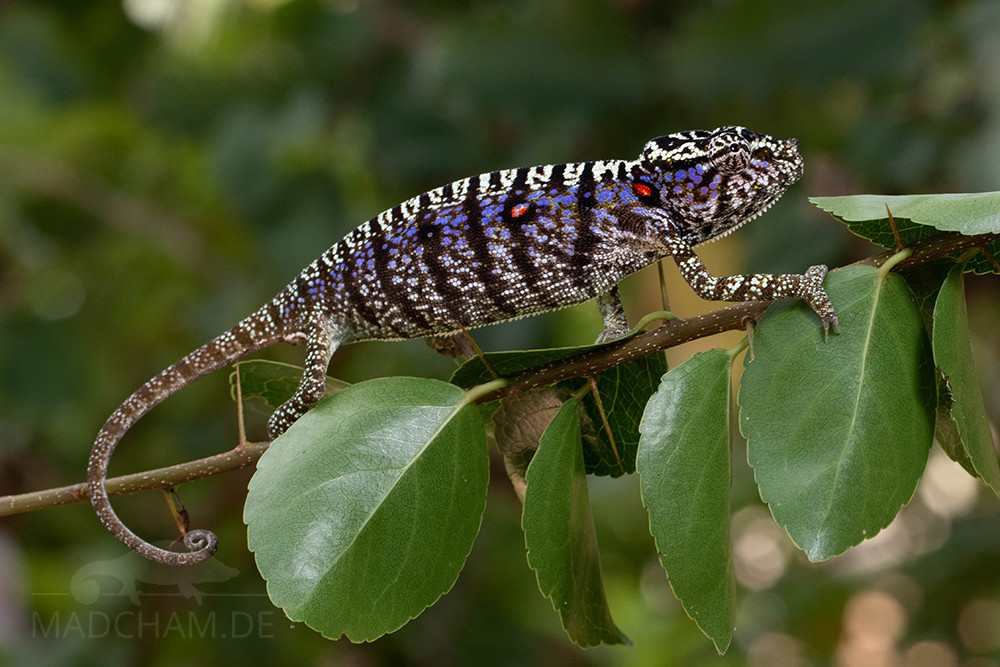 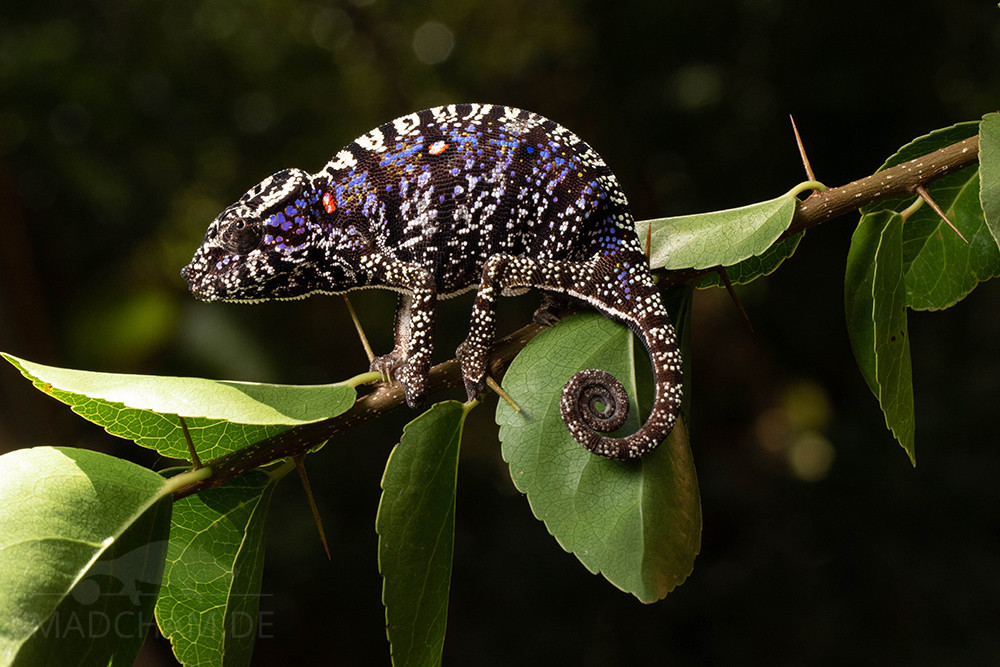 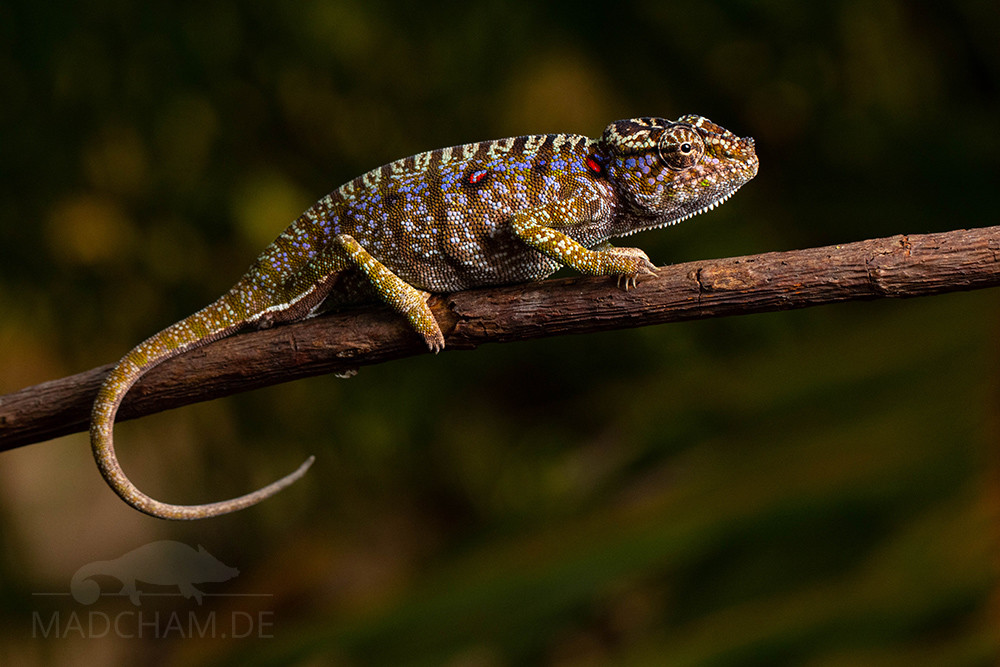 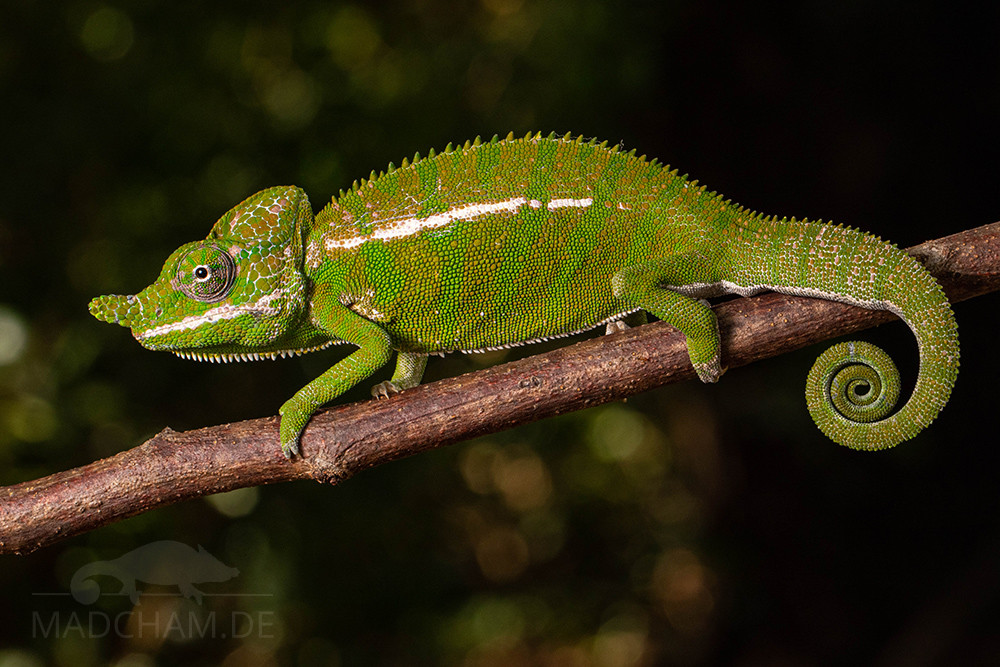 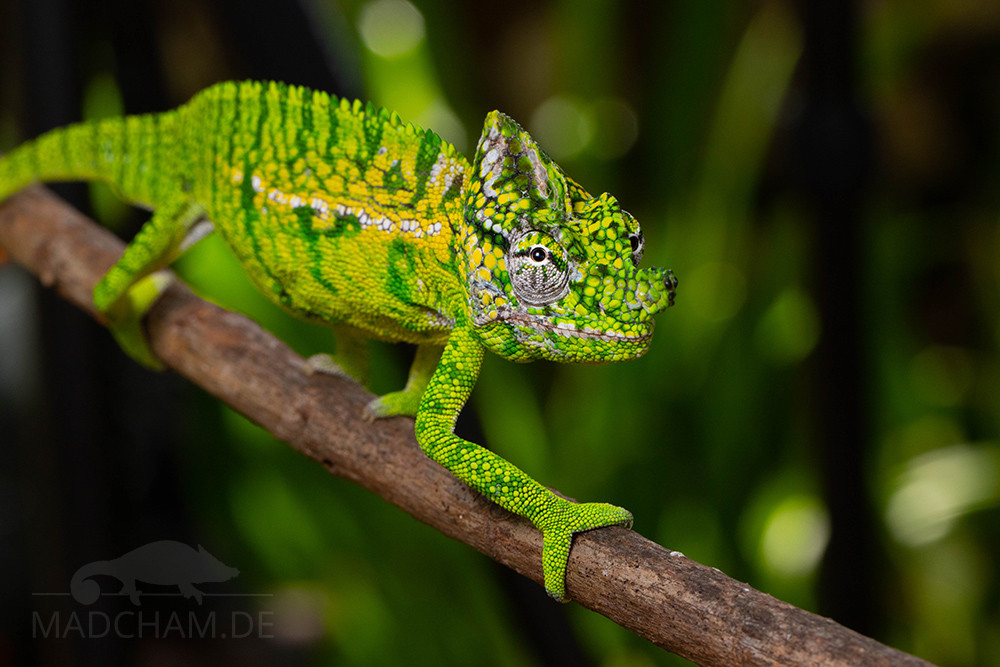 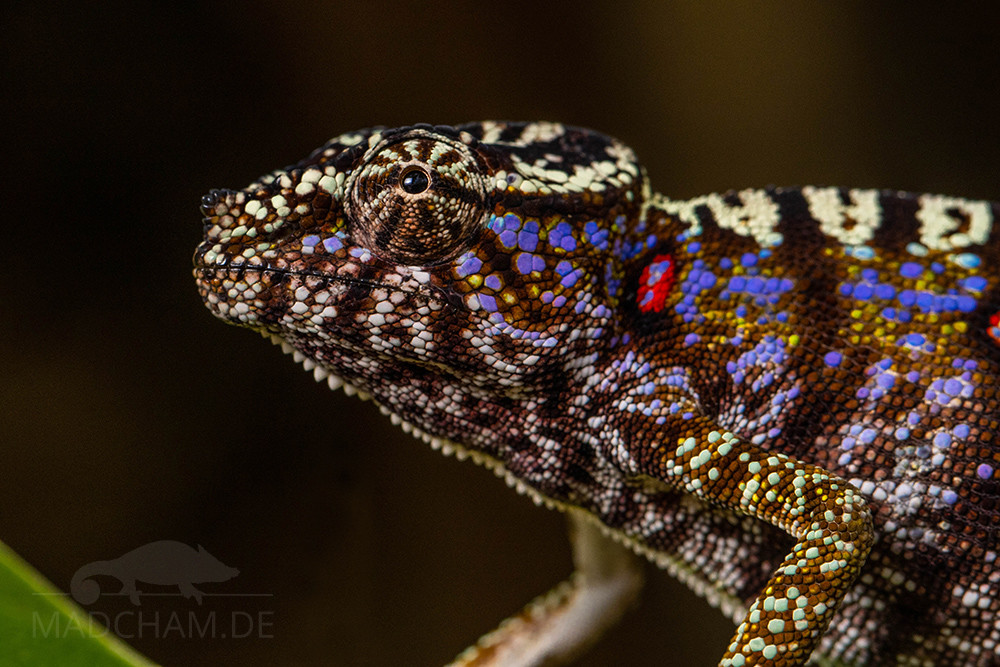 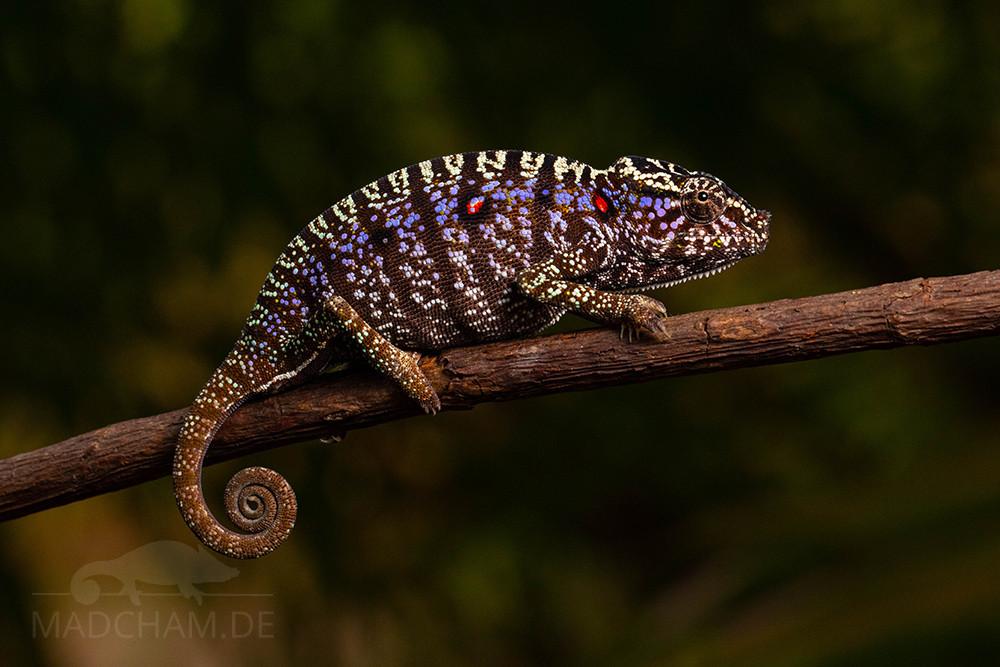 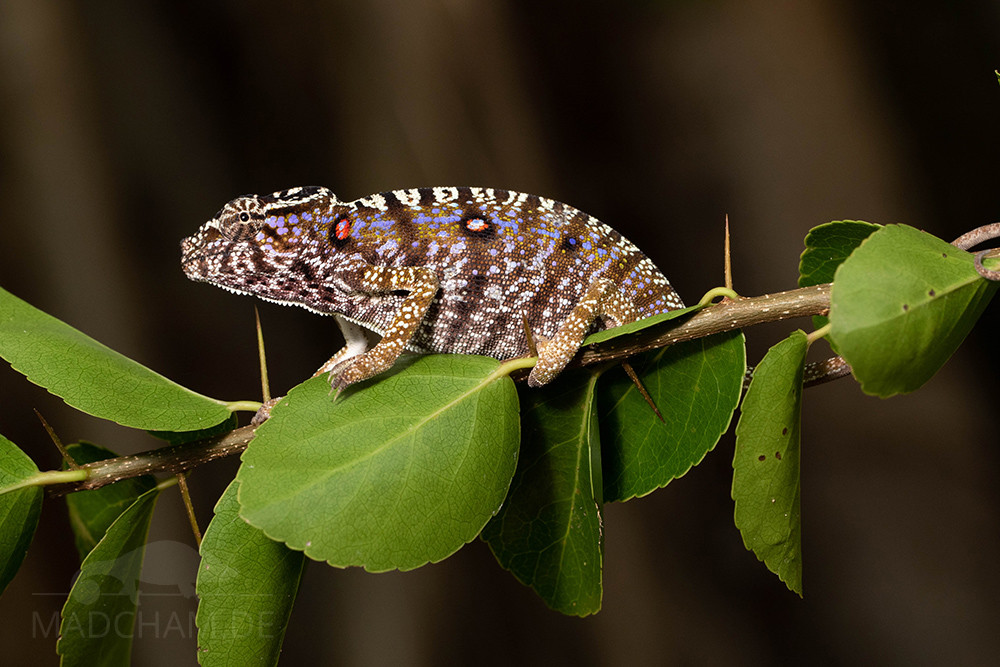 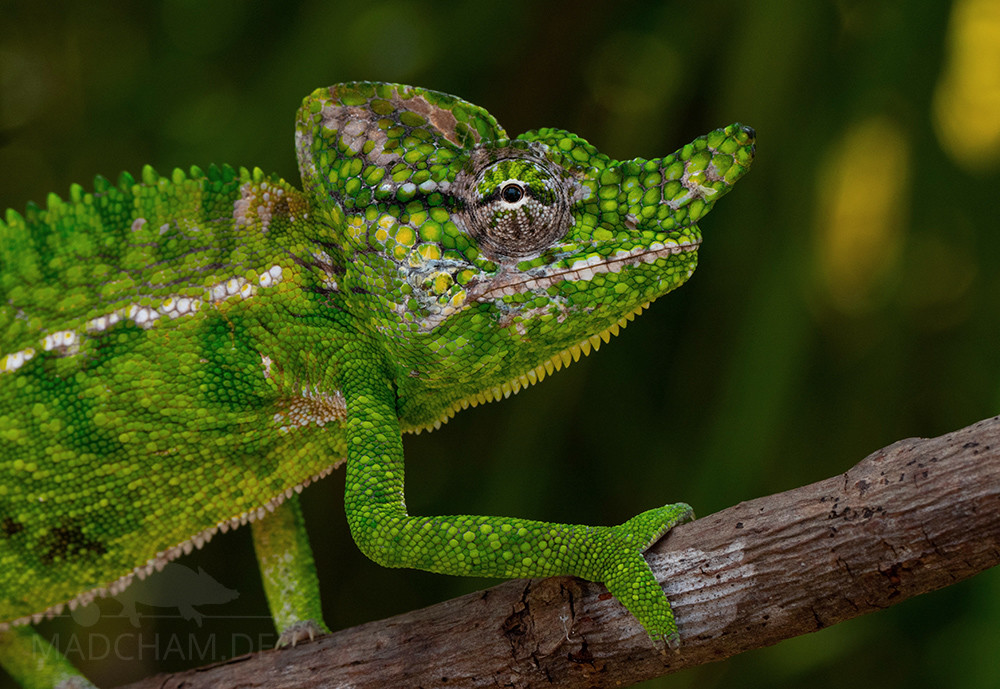 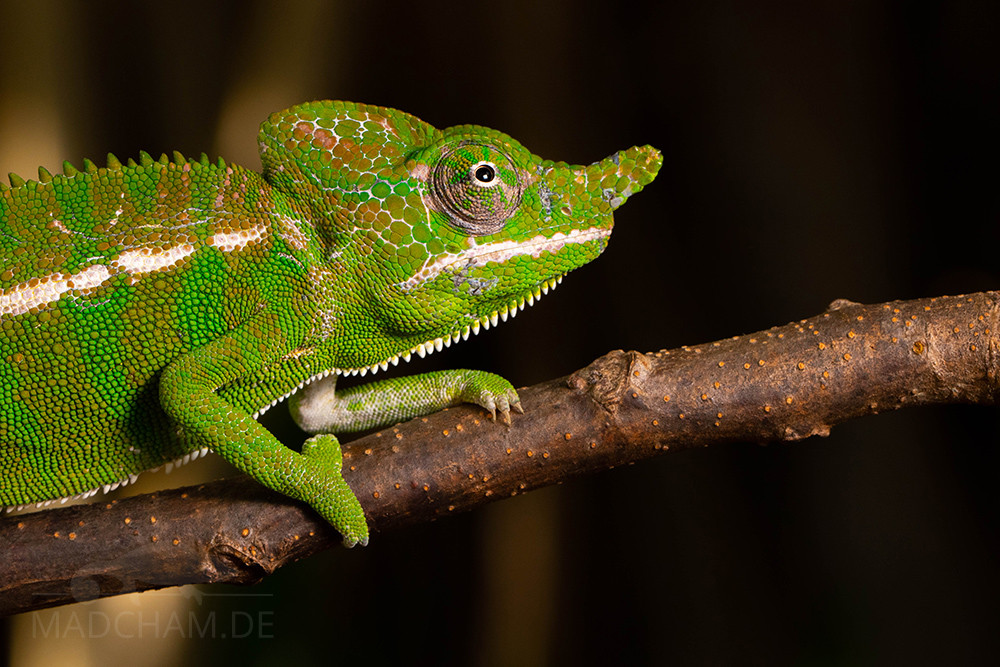 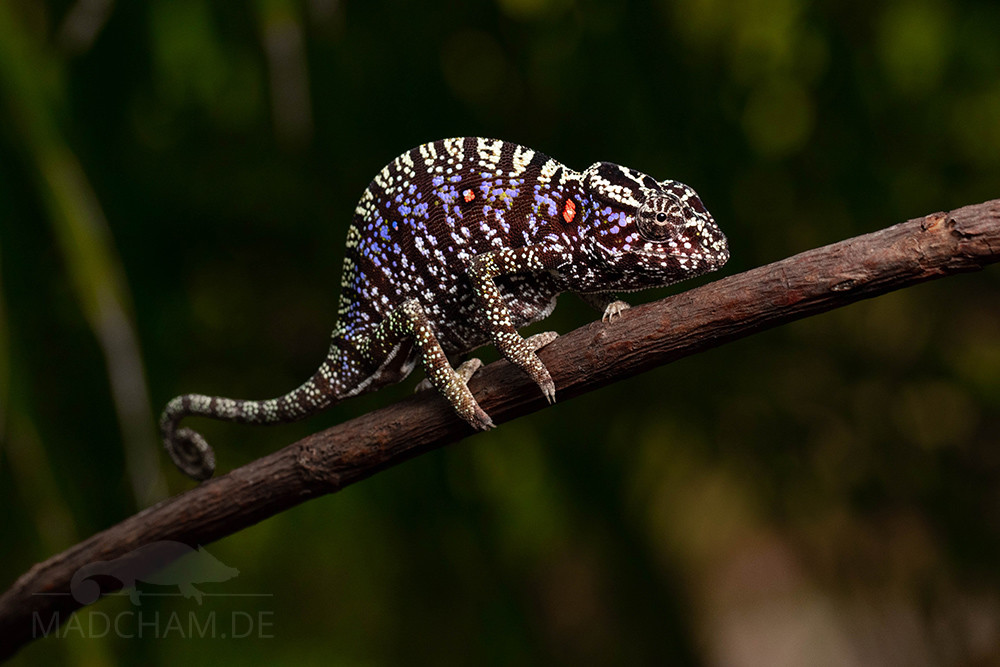 The paleontologist Oskar Böttger, then curator of the Senckenberg Museum in Frankfurt am Main, dedicated this chameleon species to the German zoologist Alfred Voeltzkow. Voeltzkow worked as a private lecturer in Strasbourg but was partly supported by the Senckenberg Museum. He undertook several expeditions to Madagascar. Between 1889 and 1905 Voeltzkow collected various species of birds, insects, reptiles, and plants on the island.

Furcifer voeltzkowi lives in the dry forests of a small protected area called Antrema. It is located on the Katsepy Peninsula on the west coast of Madagascar, directly opposite the large city of Mahajanga. The bay of Bombetoka, colored red by the river Betsiboka flowing in the channel of Mozambique, separates Katsepy from Mahajanga. The dry forest of Antrema is unfortunately very little visited and is highly threatened by deforestation. However, Furcifer voeltzkowi does not only occur in the actual dry forest but also uses secondary vegetation such as eucalyptus trees and mangoes. Another distribution area of the species is near Soalala, a very difficult to access forest remnant a little further south of Katsepy on the west coast. Even during the dry season, it is difficult to get there.

Both sexes of Furcifer voeltzkowi are small color explosions. The males are light green with white lips and white, almost continuous lateral stripes. On the head, the skin between the green scales is partly also white. When excited the males can become bright yellow with dark green thin stripes and neon green marbling. Females are light green with light blue to white patches on the chest and abdomen and purple and black patterning on the back. Over the shoulder to the back several red, black-framed spots are visible. During pregnancy and under stress female Furcifer voeltzkowi show an impressively different coloring: They are then black with white spots, the sides are bright purple-bluish. An interesting observation on iNaturalist suggests that younger females may have a more green coloration, with dark stripes when excited.

For many decades it was thought that this species belonged to Furcifer labordi. Only in 2018, it could be proven by means of specimens still existing in the museum that Furcifer voeltzkowi is an independent species. In 2020, the first evidence of living chameleons of the species in the wilderness of Madagascar for more than a hundred years was published by German researchers Frank Glaw, David Prötzel, Falk Eckhardt, and others. Females of Furcifer voeltzkowi, which had been unknown until 2020, were also described for the first time. 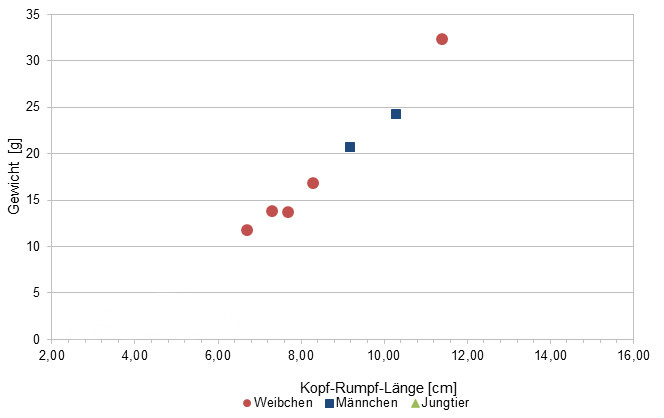 Since 2020 we have been measuring the weights of Furcifer voeltzkowi found by us on Madagascar, as far as the animals (and our scales) participate. So far there are only a few weights for this species, in the long run, it should be possible to read an average weight in relation to the head-torso-length (measured from the tip of the nose to the cloaca) from as many measurements as possible. It is important to know that all weights were measured towards the end of the rainy season (= best food supply), so these are probably maximum weights on Madagascar. Triangular symbols in females mean not pregnant, round symbols mean pregnant.

The climate on the Katsepy Peninsula is one thing above all: Unbelievably hot. You are actually always sweating, even if you do not move at all. Temperatures above 30°C are the rule. At night, temperatures in the rainy season fall only slightly below 25°C, but during the dry season, they drop significantly to 18°C. Therewith, especially in the dry season, the difference between the day and night temperatures is partly quite enormous.

Katsepy has only a short rainy season from November to March during which the plant world can recover. In some years it is even shorter. From about April, it becomes almost dust-dry on Katsepy - rainy days are the absolute exception until October. Sun and heat are in abundance every day. 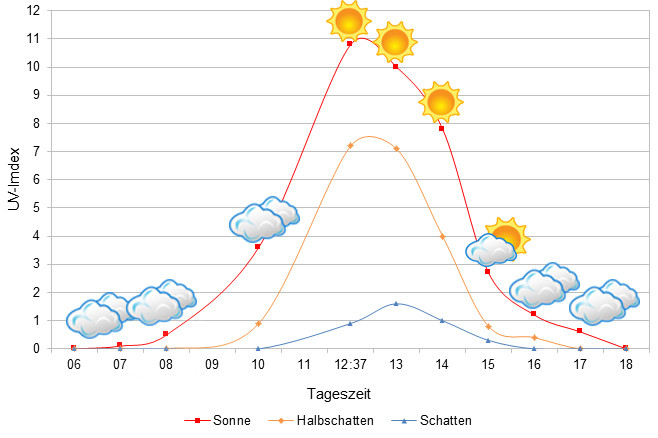 Unfortunately, there are no ground temperatures available for Katsepy yet.

The species lives in the dry forest of Antrema as well as in the adjacent, overgrown secondary vegetation. Furcifer voeltzkowi does not seem to be choosy. They can be found on mangos as well as on native plants. They prefer densely leafy trees with thin branches and do not shy away from bushes with many thorns. The soil of the Katsepy Peninsula consists mainly of laterite or a sand-laterite mixture.

In the following, you will find some 360° pictures from Katsepy, which we took during the rainy season. With the mouse, you can turn in all directions. If you click on the Theta logo, the pictures will open in a separate window in an enlarged view. There it is also possible to view the pictures in full-screen mode. Have fun while watching it!