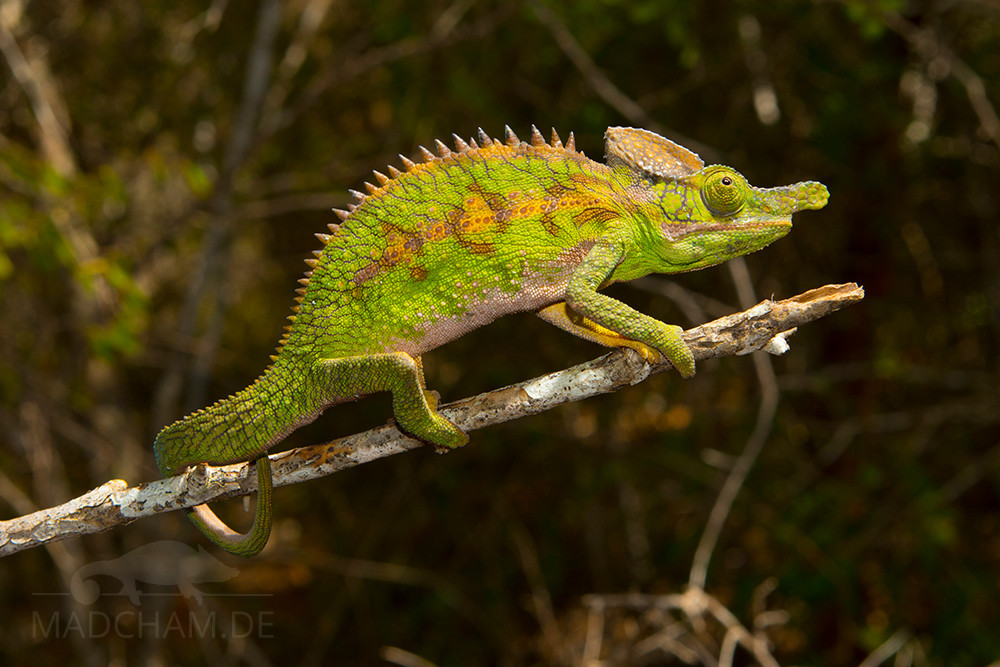 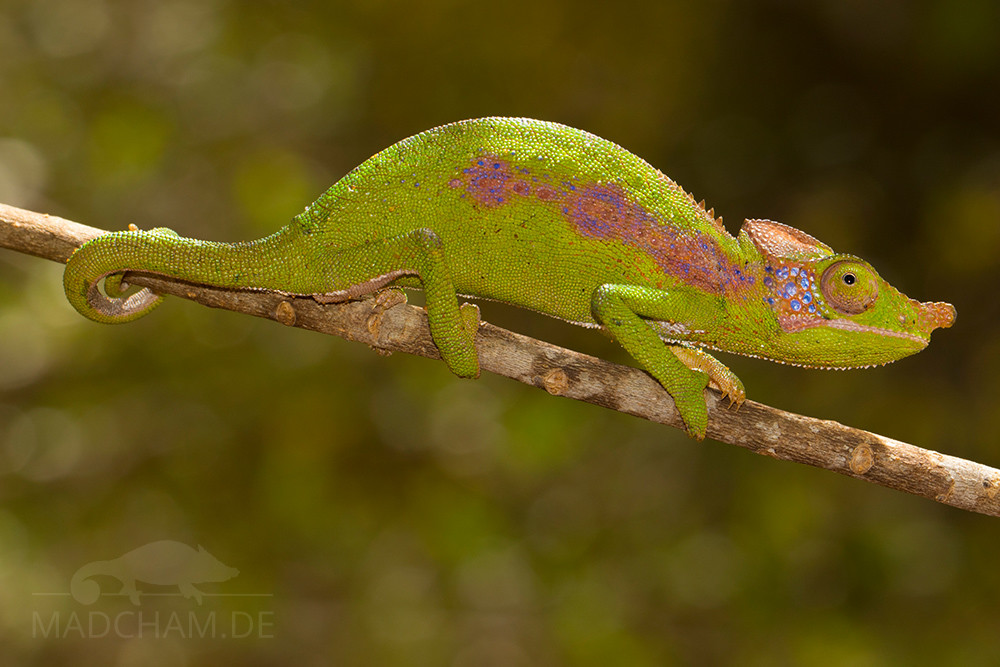 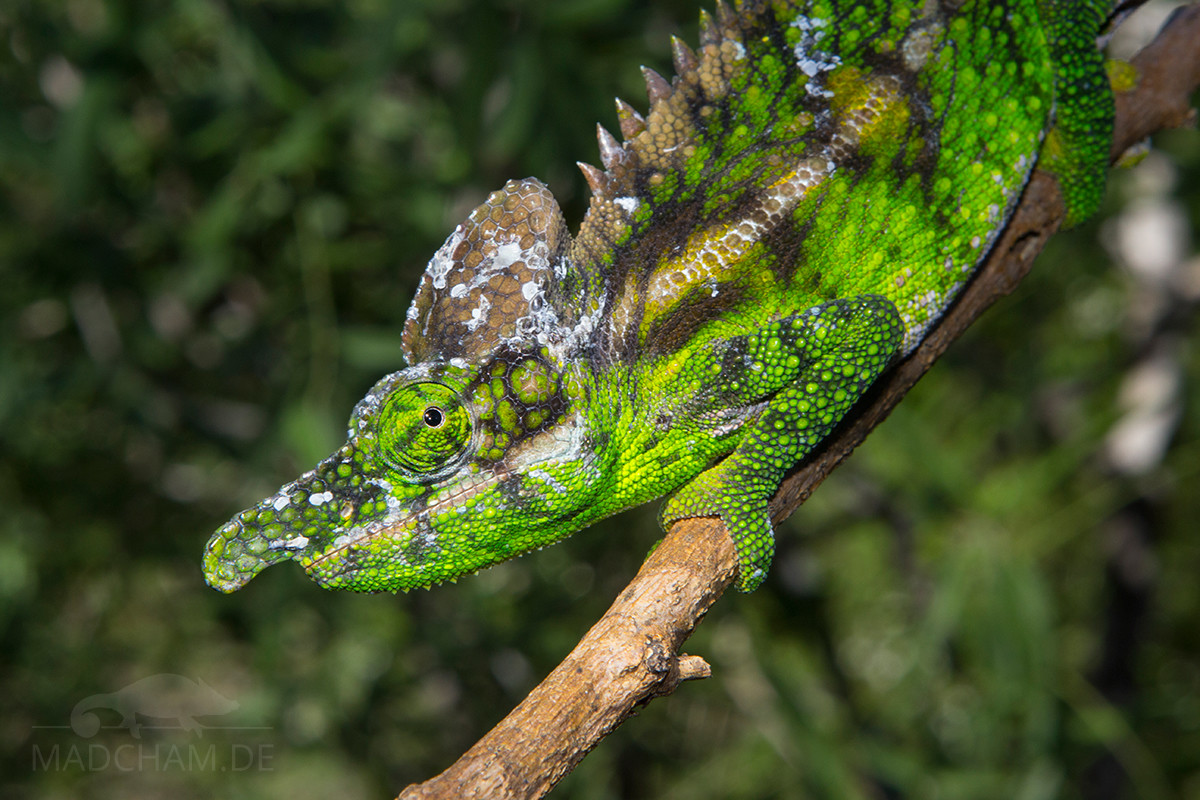 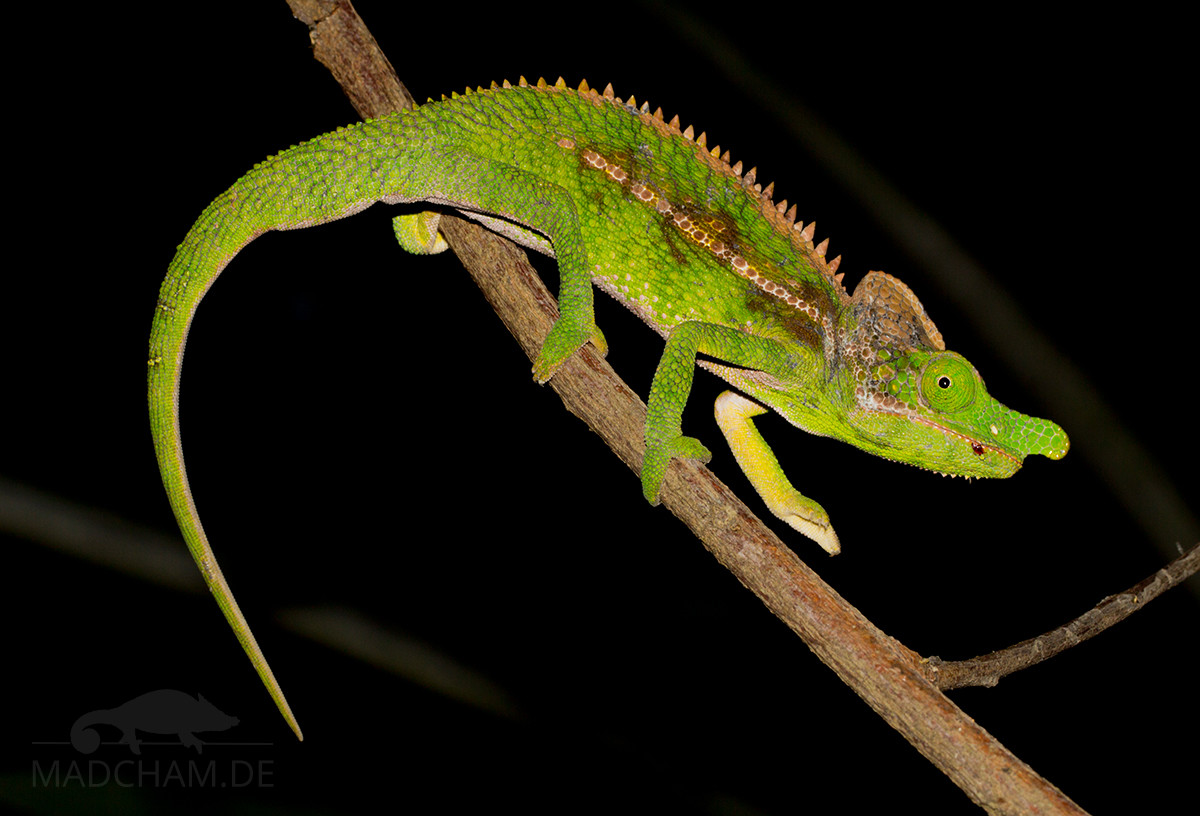 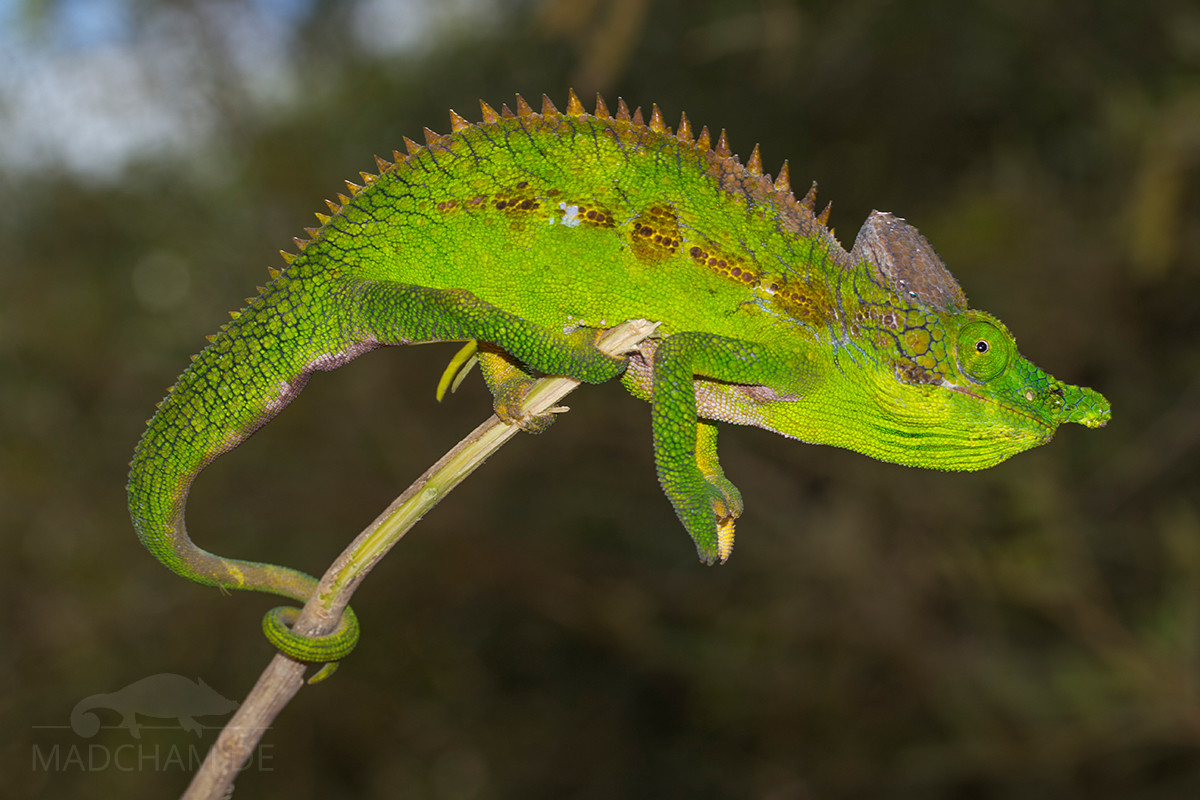 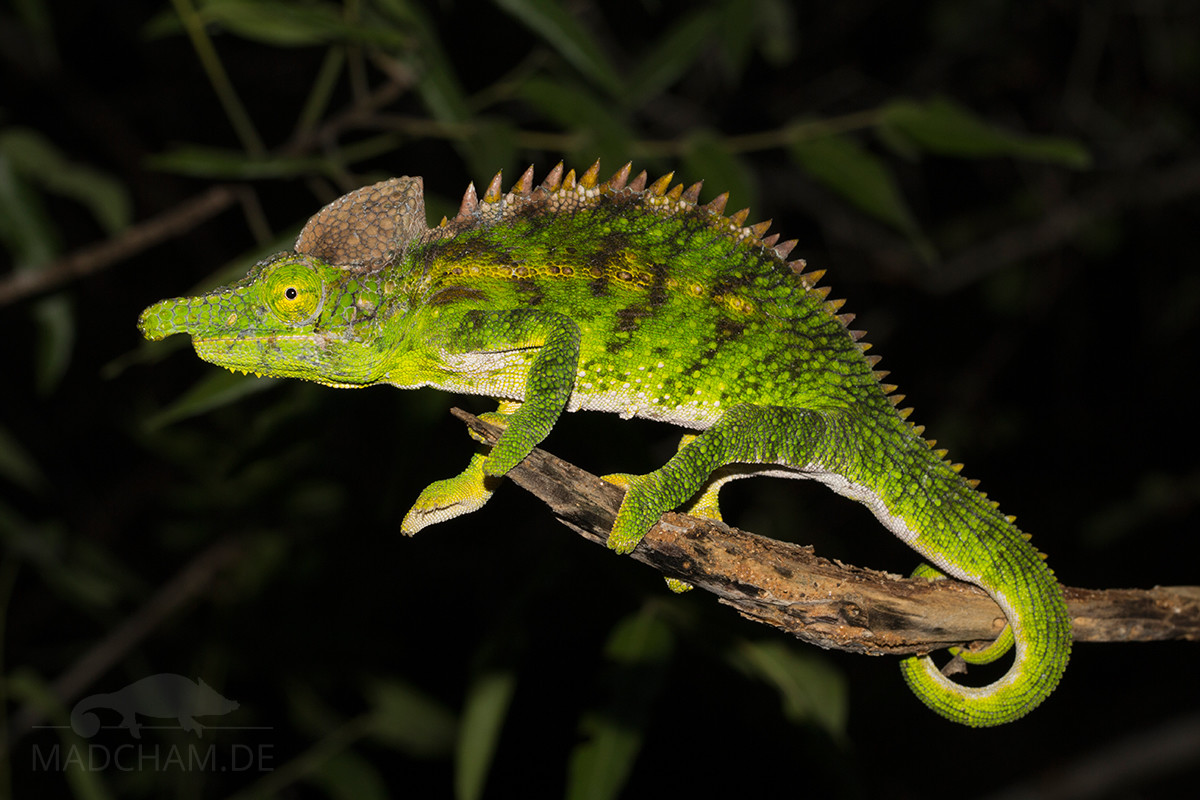 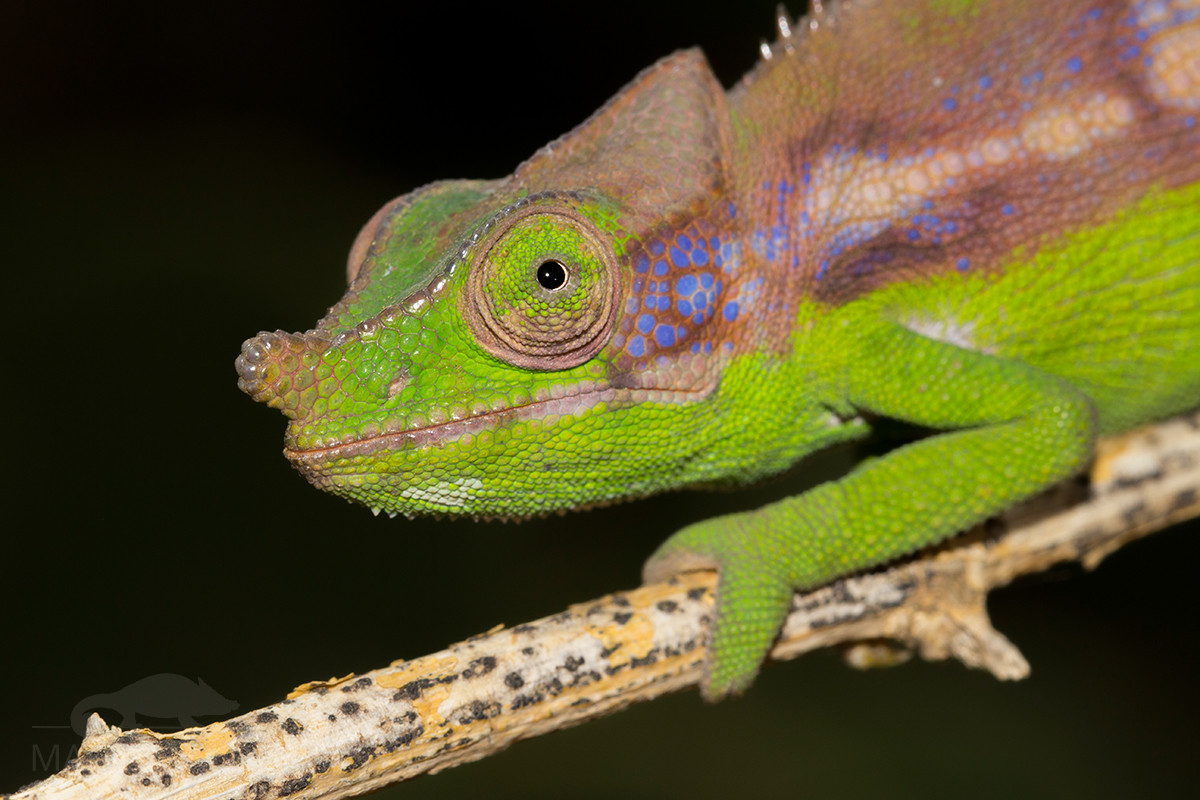 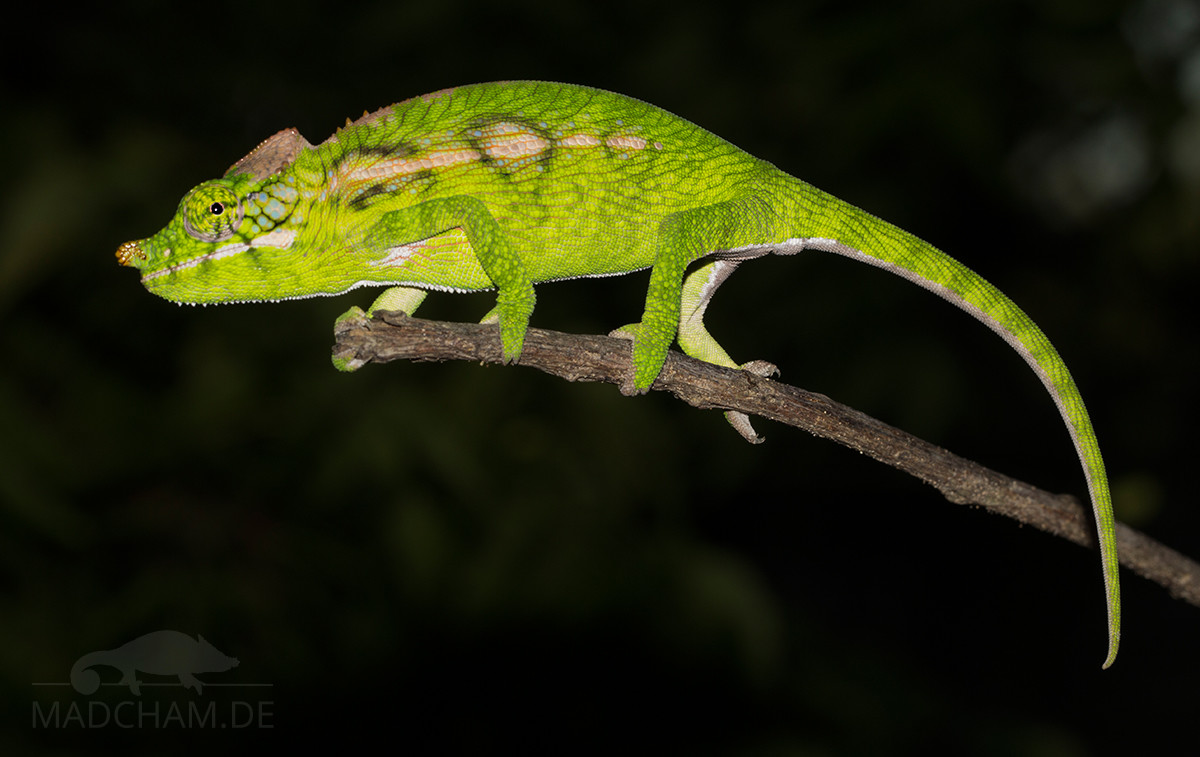 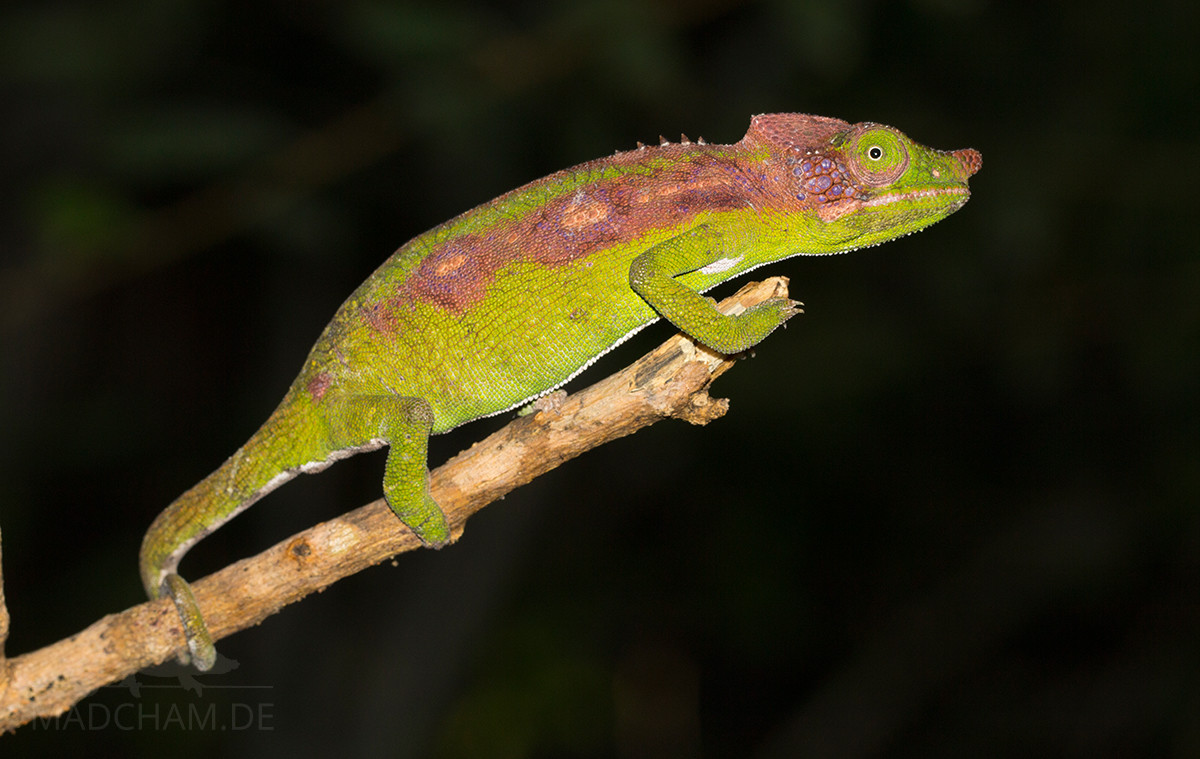 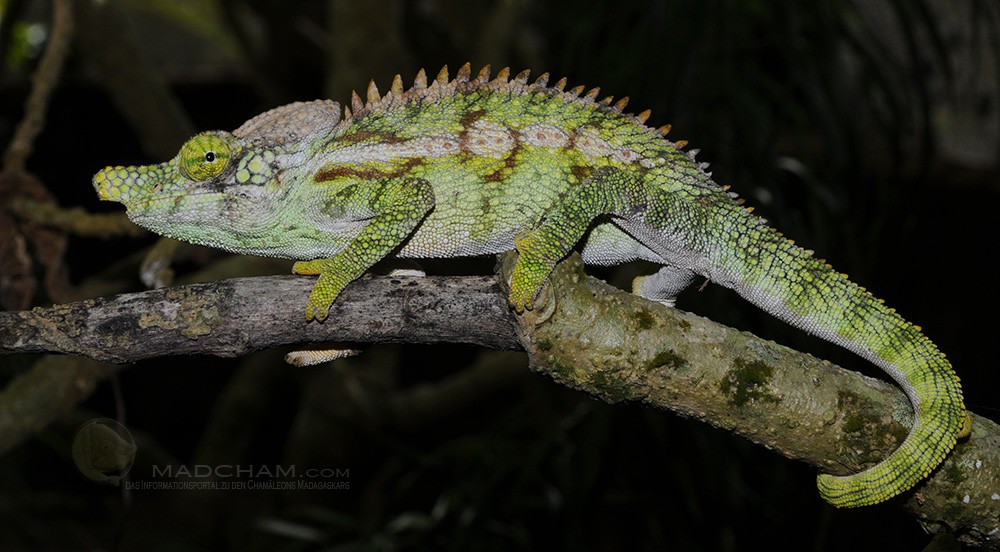 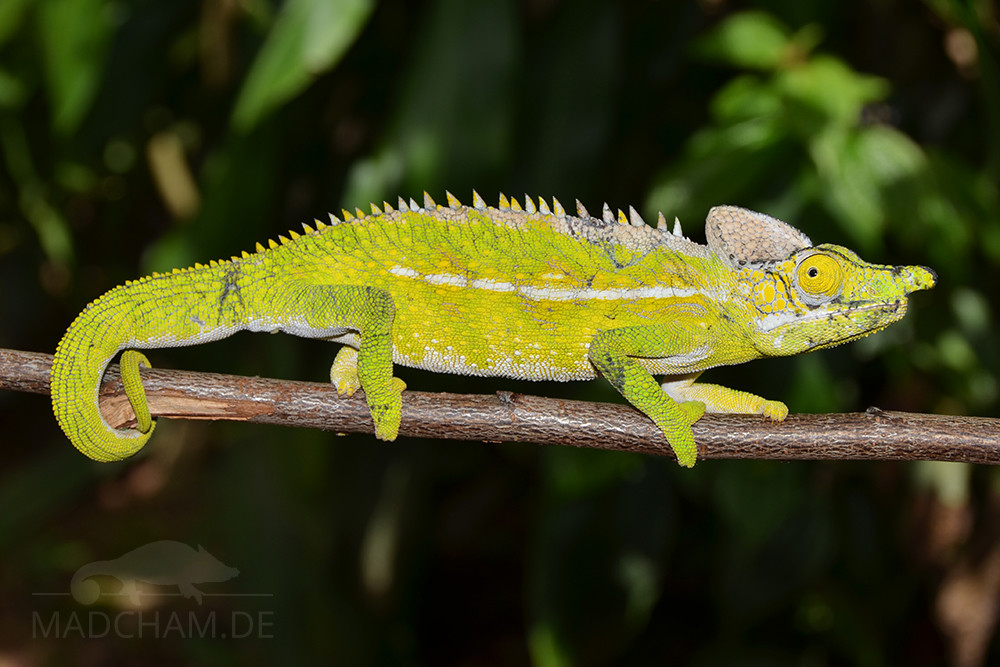 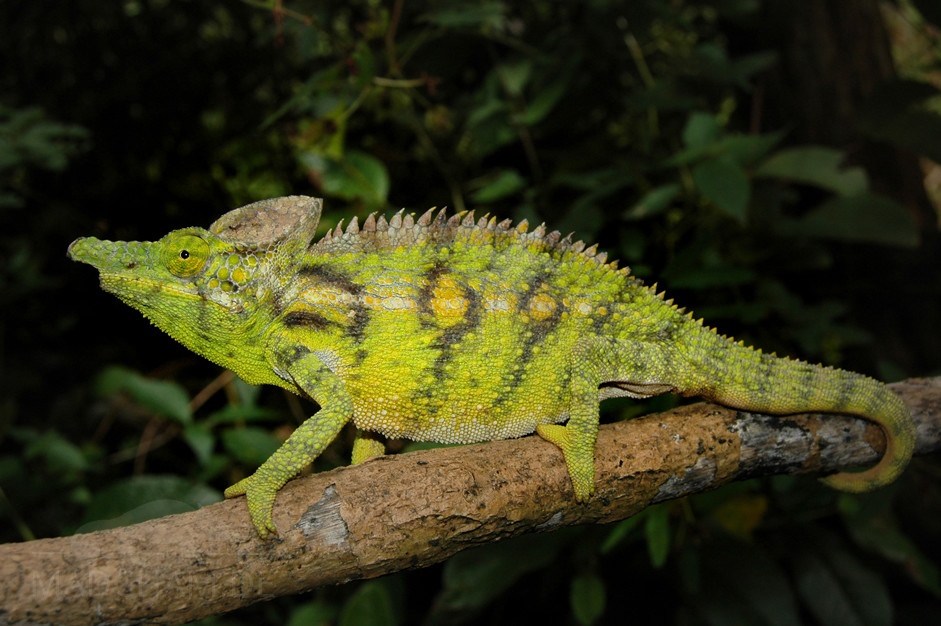 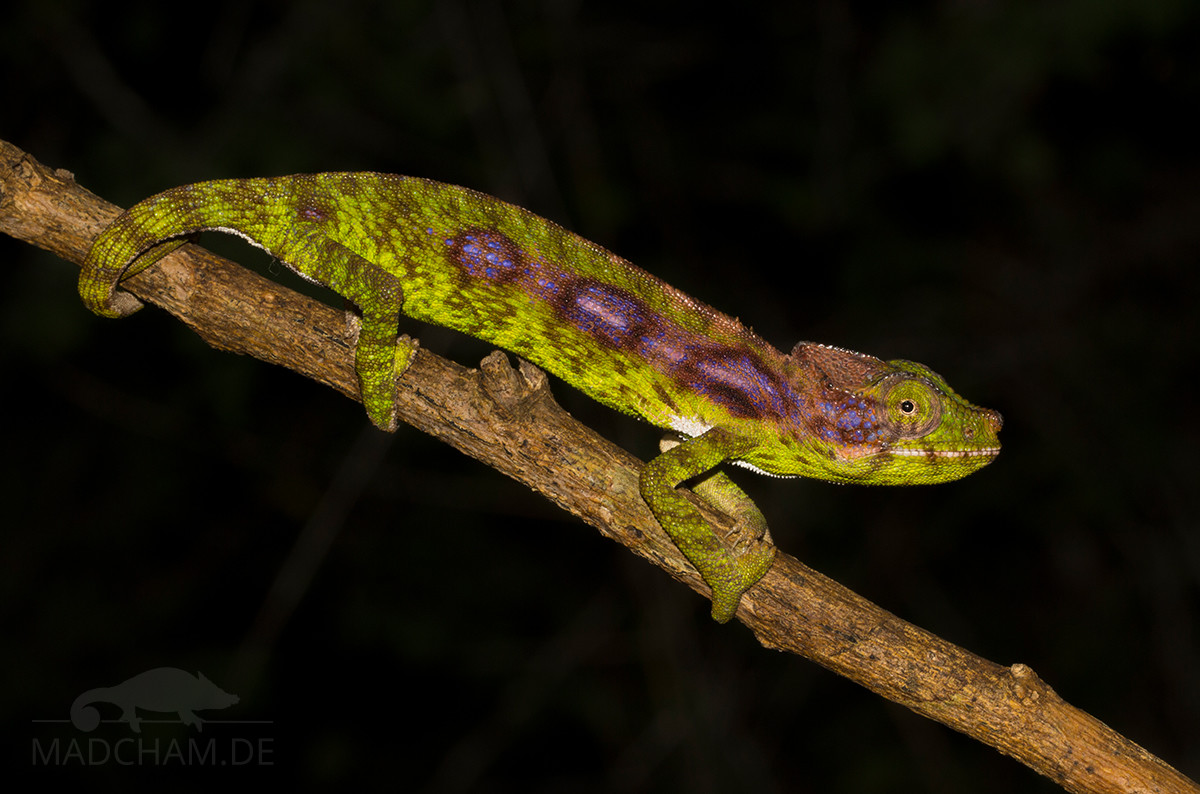 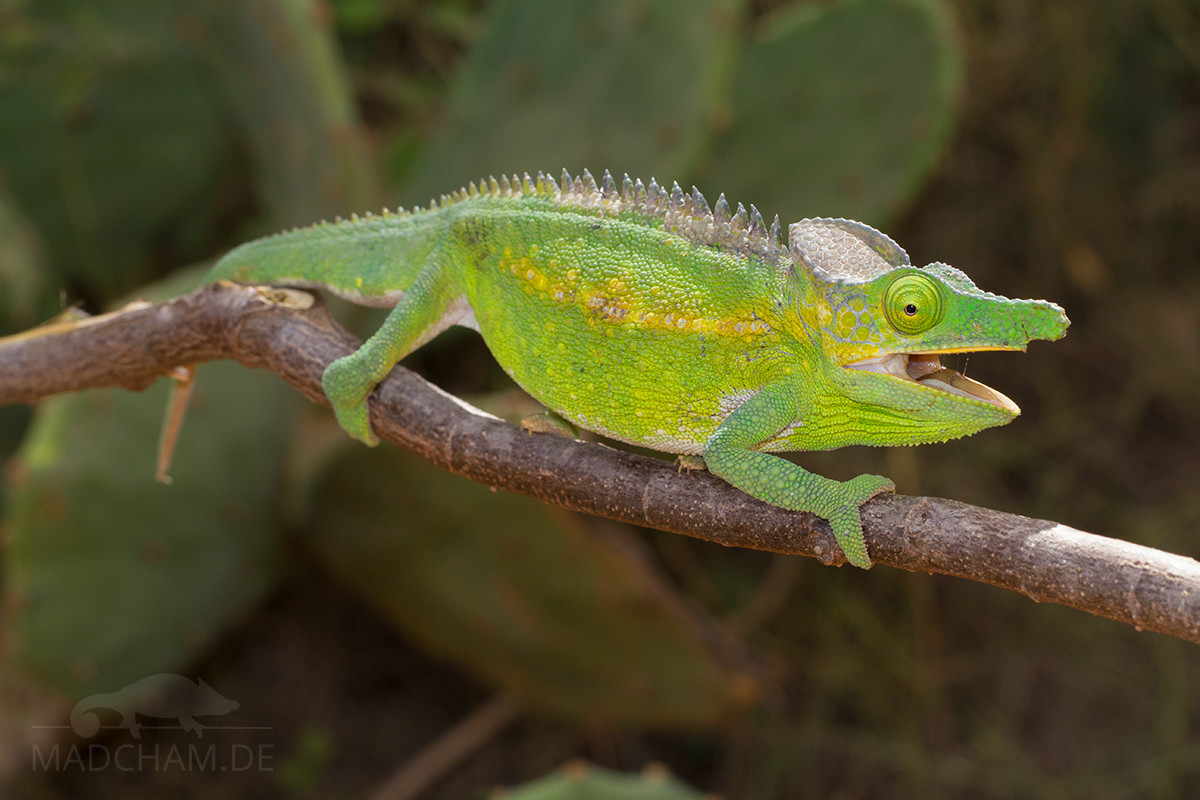 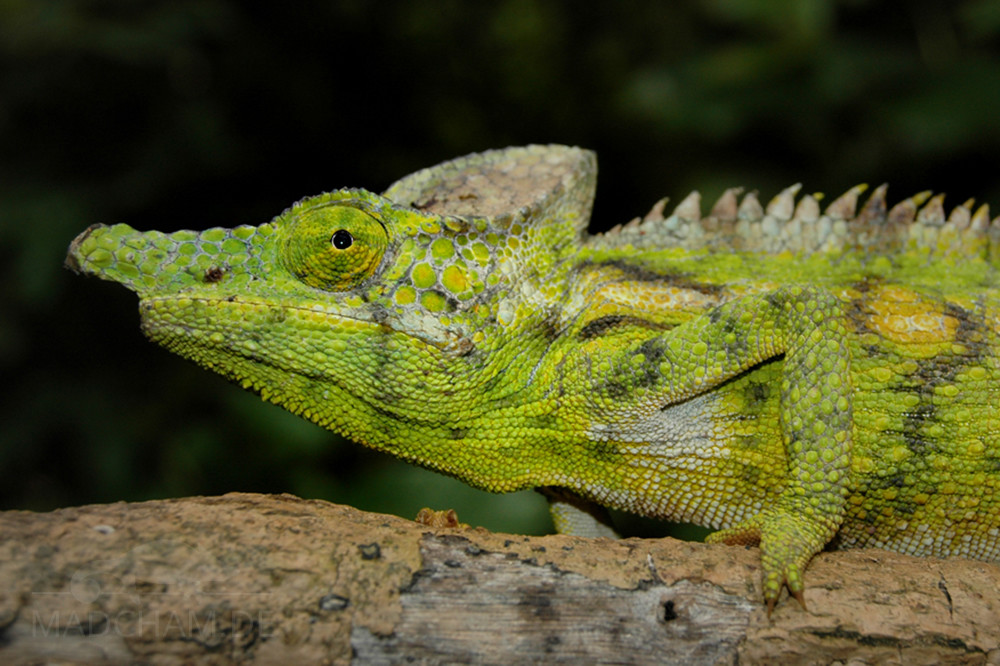 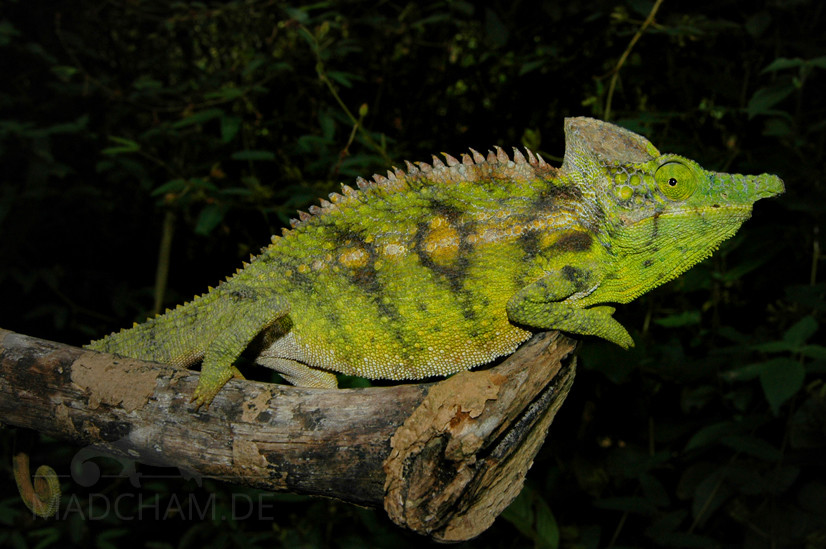 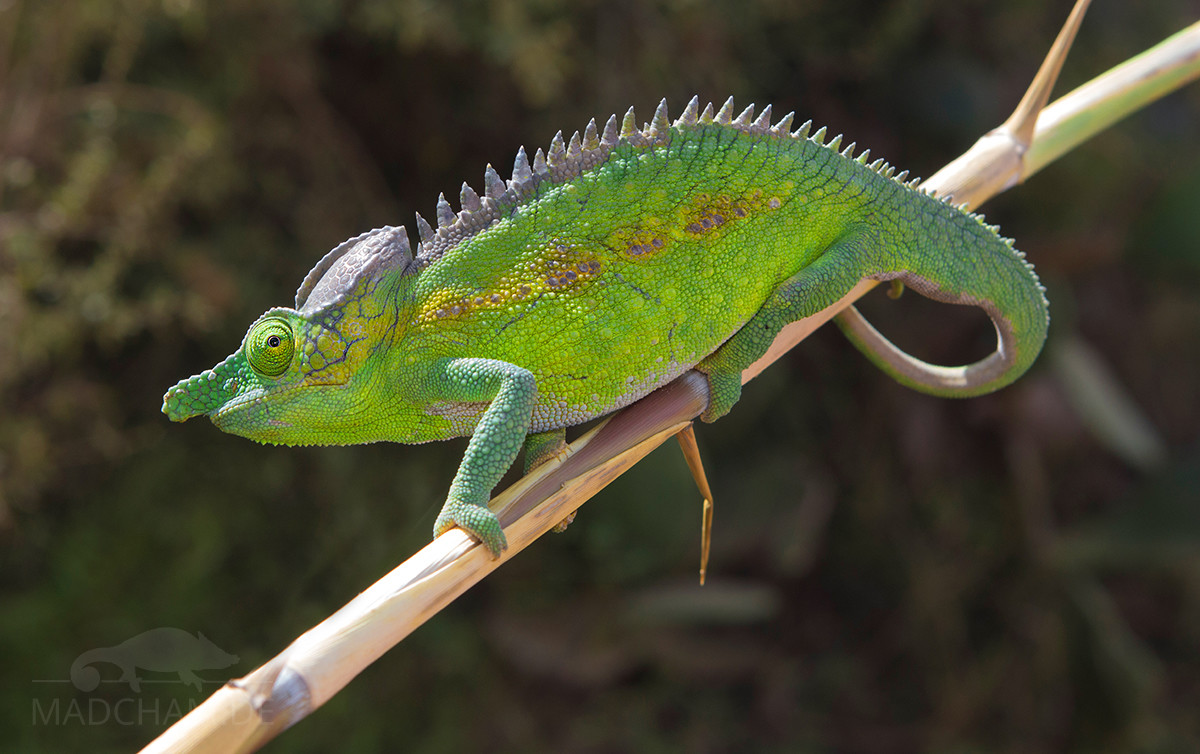 The French naturalist Alfred Grandidier visited Madagascar three times between 1865 and 1868, traveling almost the entire island and producing one of the first maps of the country. Back in France, he began to write his life’s work L’Histoire physique, naturelle et politique de Madagascar in 40 volumes. In 1872, he described Furcifer antimena after specimens he had collected himself, which he simply named after their origin, the Menabe-Antimena region.

Furcifer antimena inhabits the spiny forests and savannah edges of dry and hot southwest Madagascar. The best time to find these animals is from the mid of February to the mid of March in the Didiereaceae forests nearby Toliara (Tuléar). The distribution area extends from Morombe to Antsokay south of Toliara, although we could always find most specimens about 15 to 50 kilometers north of Toliara.

Males reach a length of approximately 35 cm, females are much small with almost 20 cm. Both genders have a small, round nose appendage which is more distinct in males. Males have a dorsal crest made of large spines, in females this dorsal crest os only visible in the anterior part of the back. The casque is high, the body is bright green colored with yellow accents, a white belly and a white lateral stripe that is interrupted several times. When stressed, this species shows dark rings on both sides. Females have a colorful casque and violet cheeks with the violet color continuing to the sides, some have a very strong violet pattern. Younger females often have only violet and blue dots on the cheeks.

At the beginning of January until the beginning of April, females lay 10-15 eggs in dry and sandy ground. The eggs need approximately one year until young will hatch – they wait for the next rainy season.

Climate in Toliara (Tuléar) and surroundings is mainly one thing: Hot. In rainy season, daily temperatures rise easily to more than 30°C. In sunny places, it may even get 45°C. This is the location to look for every shady place you can get. And although it is called "rainy" season, precipitation in the south is lean. In good years, it is raining every couple of days from November to February. In worse years, it is raining even less.

During dry season, temperatures drop a little, but it remains very warm. In the night, temperatuers in July and August may drop even to 15°C, but days reach temperatures over 25°C without a problem. This large temperature drop is typical for the area. The dry season has only shot and very few rainfall. 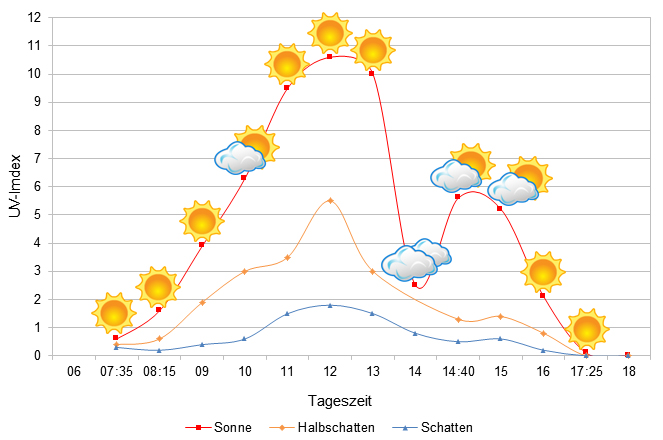 Unfortunately, we have no ground temperatures for Toliara available yet.

The habitat of Furcifer antimena consists of spiny and dry forests which are only green during the rainy season. In the dry season, the whole region is gray and withered. Where still is spiny forest, the ground is red sand and the forest is not really high, but the more so dense. Spiny plants, among them, introduced opuntia, make the main part of the vegetation. In between, there may be Baobabs from time to time. But Furcifer antimena also inhabits secondary vegetation. It occurs in shrubs and bushes on sandy dunes and dried clay ground. During the dry season, many specimens die because of the harsh environmental conditions.

Hereinafter you can find some 360° pictures from Antsokay and Ifaty that we took during the rainy season. You can move inside these pictures via mouse click in all directions. If you click on the Theta logo, a new window with an enlarged view will open. You will also have the opportunity to look at the pictures in full-screen mode. Enjoy!