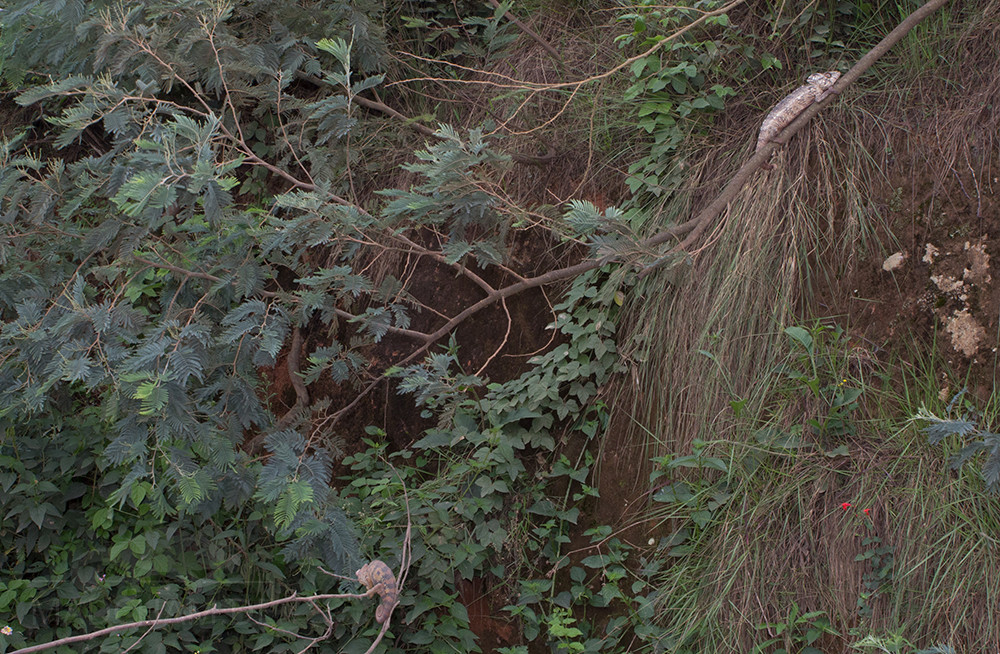 Photo above: A female and a male Furcifer oustaleti during the rainy season,
found sitting not far from each other in bushes near Andavadompy in the central highlands

Chameleons are considered to be strict solitary animals. For most Malagasy species this is true almost without restrictions. During the mating season – in Madagascar during the rainy season from about November to March – some chameleon species prefer being in pairs. The animals do not sleep on the same branch at night, but often within the same square meter of the forest. During the day they tolerate the presence of the opposite sex, which is usually not the case during the dry season. In Furcifer pardalis, for example, this can be readily observed in the rainy season: Where there is a female in the rainy season, there is a high probability to find the matching male. 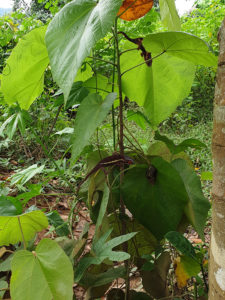 A female (top) and a male (bottom) panther chameleon found on the same plant in Ankaramibe, northwest Madagascar

In some chameleon species, including Calumma linotum and Calumma boettgeri, the male continues to accompany the female for several days after the successful mating. This behavior is known by other animals under the term mate guarding. The main purpose of this behavior is to protect the female from the advances of other males. The male, who protects “his” female, thus secures his own reproduction and the spread of his own genes. In addition, he can mate several times if it has not worked out at the first attempt.

In the leaf chameleons of the Brookesia minima group, some males even allow themselves to be carried around by the larger females for a period of time during the breeding season. They simply remain sitting on the female’s back after the actual mating instead of climbing back down. This behavior saves the small chameleons energy and provides the opportunity to mate again with the same female within a short period of time.

In most chameleon species on Madagascar, this kind of temporary (only briefly existing) pair bond ends with the gravidity of the female. The female then drives the intrusive male away quite rigorously from her immediate environment, as she no longer wishes to mate. Also, approach attempts are then acknowledged with threatening hissing and corresponding coloration.

By the way, you can’t talk about emotions like infatuation with chameleons. With them, the practical benefits prevail in pair bonding. 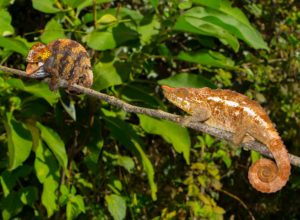 The female Calumma crypticum on the left of the picture is already gravid and threatens the interested male on the right to keep him from coming closer; near Ambositra in the southern highlands

It is unclear whether or not chameleons specifically search for the previous year’s mate during the next rainy season. For most species, it is assumed that this is not the case. In the species that show pronounced mate guarding, it has not yet been studied in Madagascar.

A pair bond in the sense of permanent or even lifelong monogamy, as it occurs in mammals and birds, has not yet been observed in Malagasy chameleons. New pairs can form in every rainy season. Even during a single rainy season, a chameleon may mate with several conspecifics of the opposite sex. That a pair bond survives several rainy and dry seasons is very rare and known only from a few species on the African mainland. On Madagascar, there is currently a lack of studies on this.