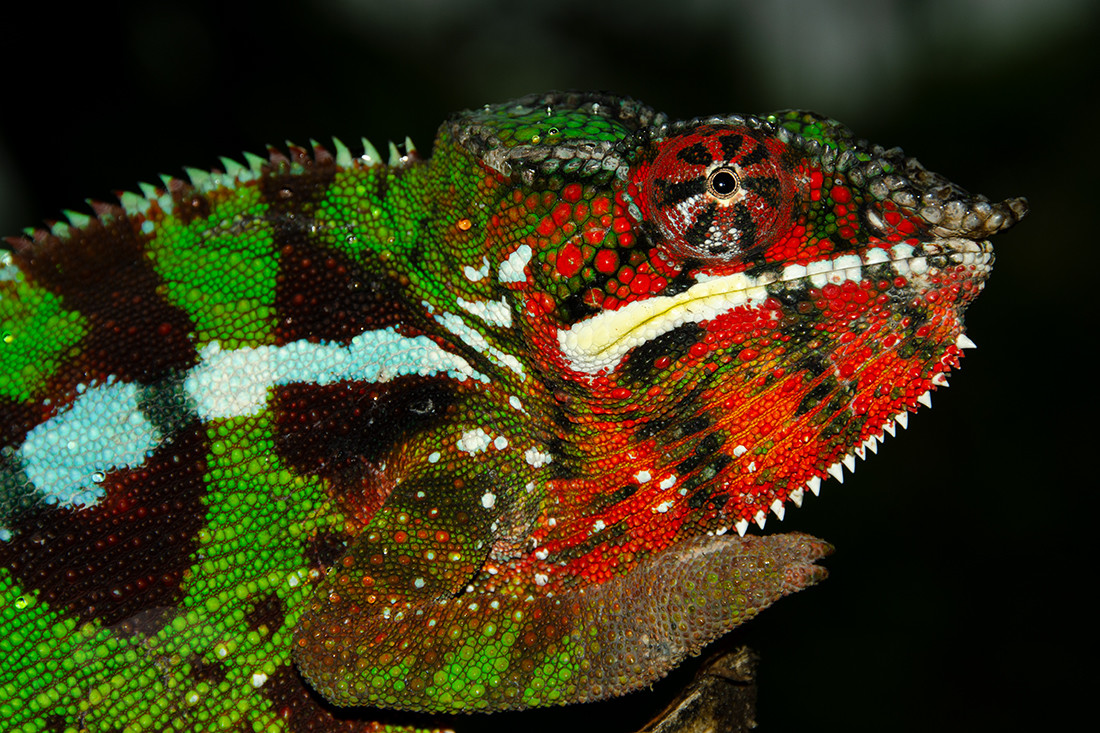 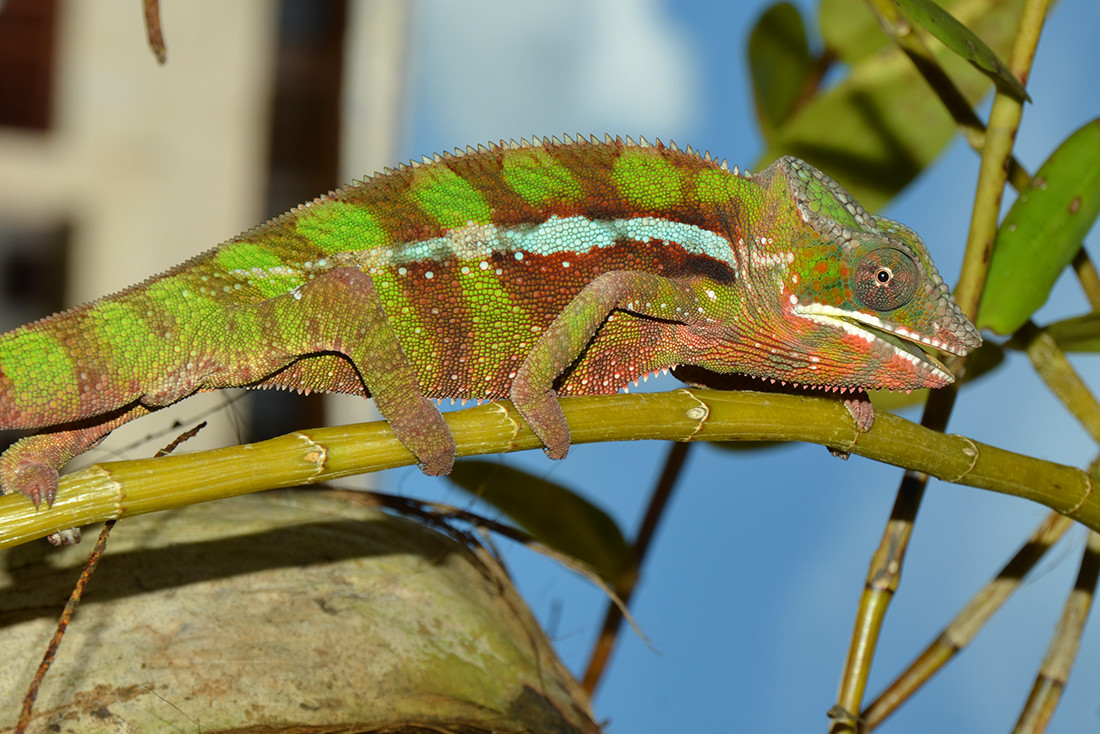 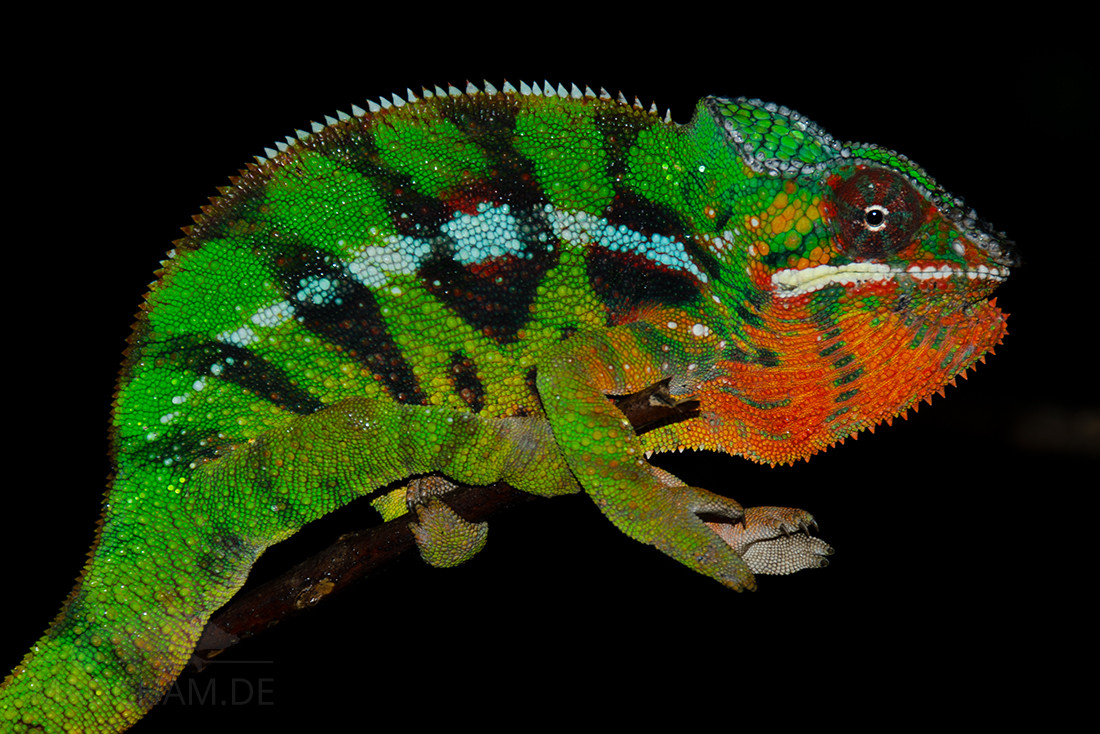 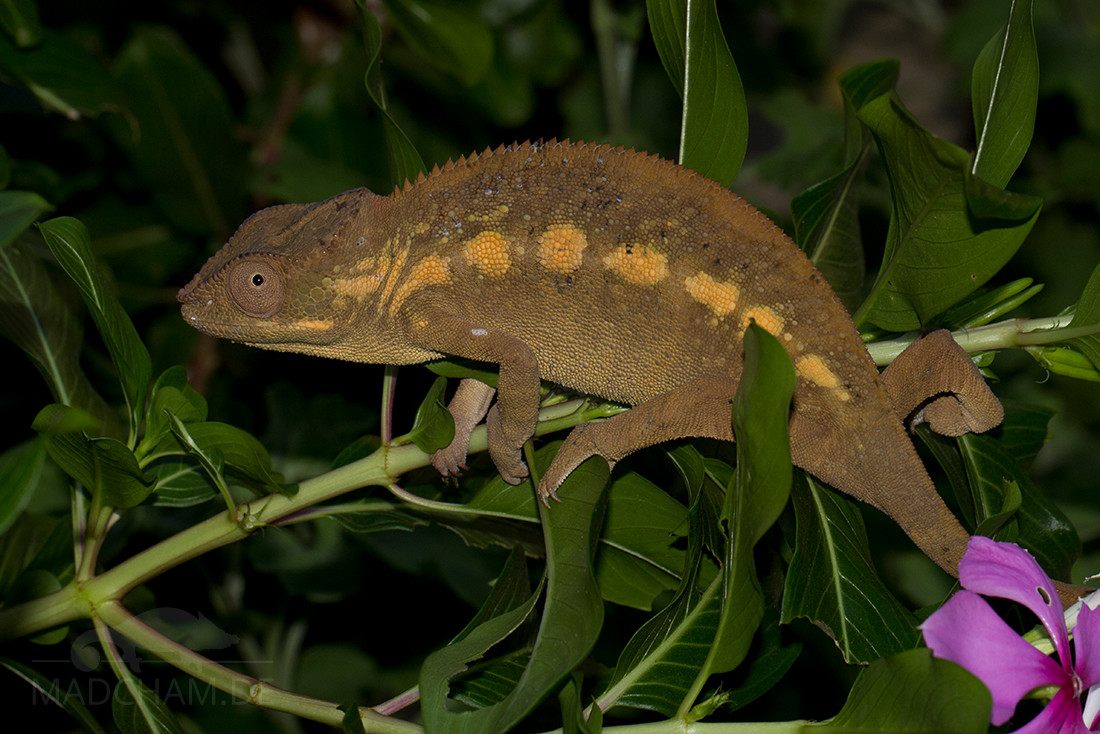 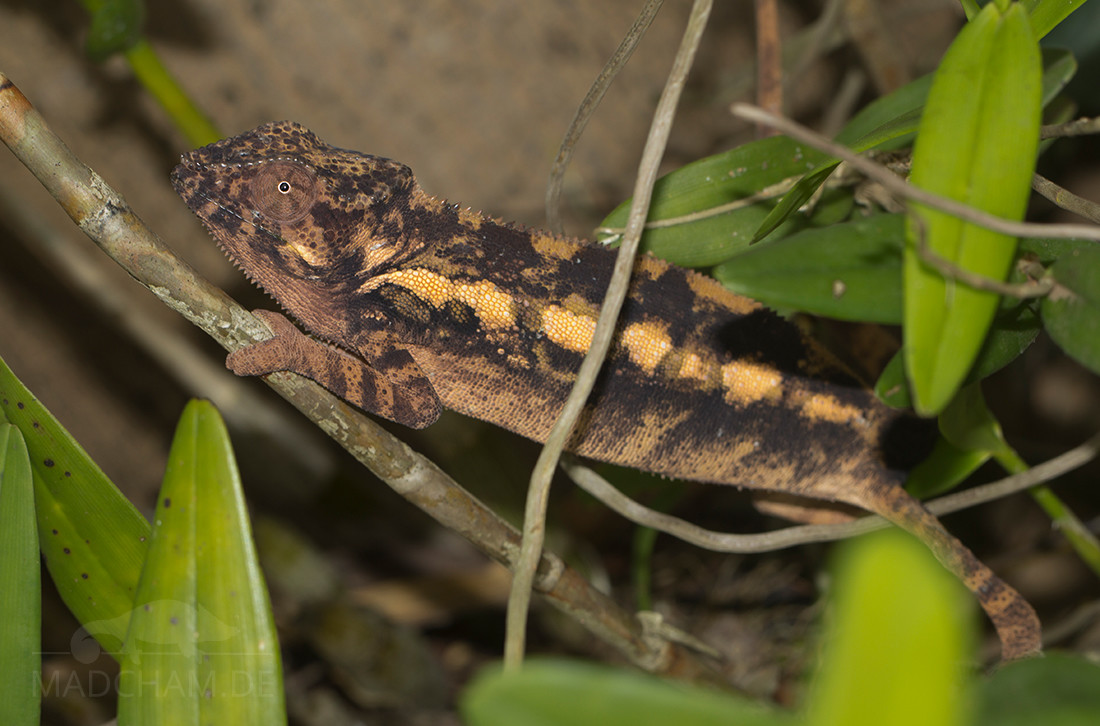 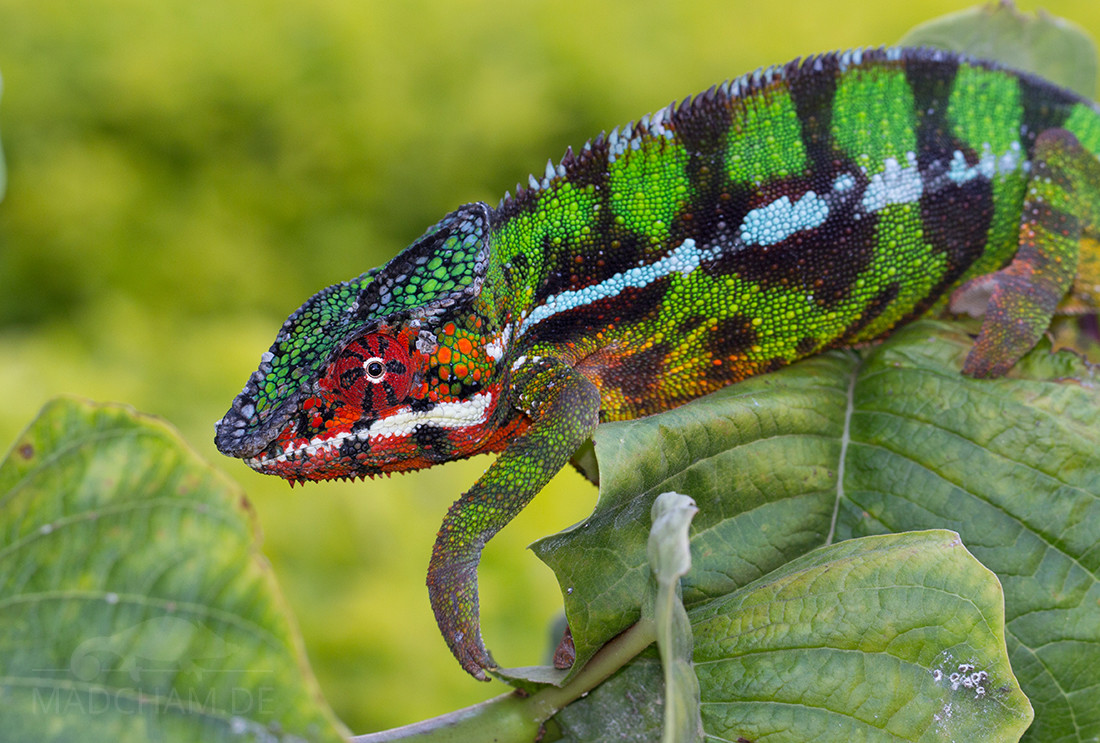 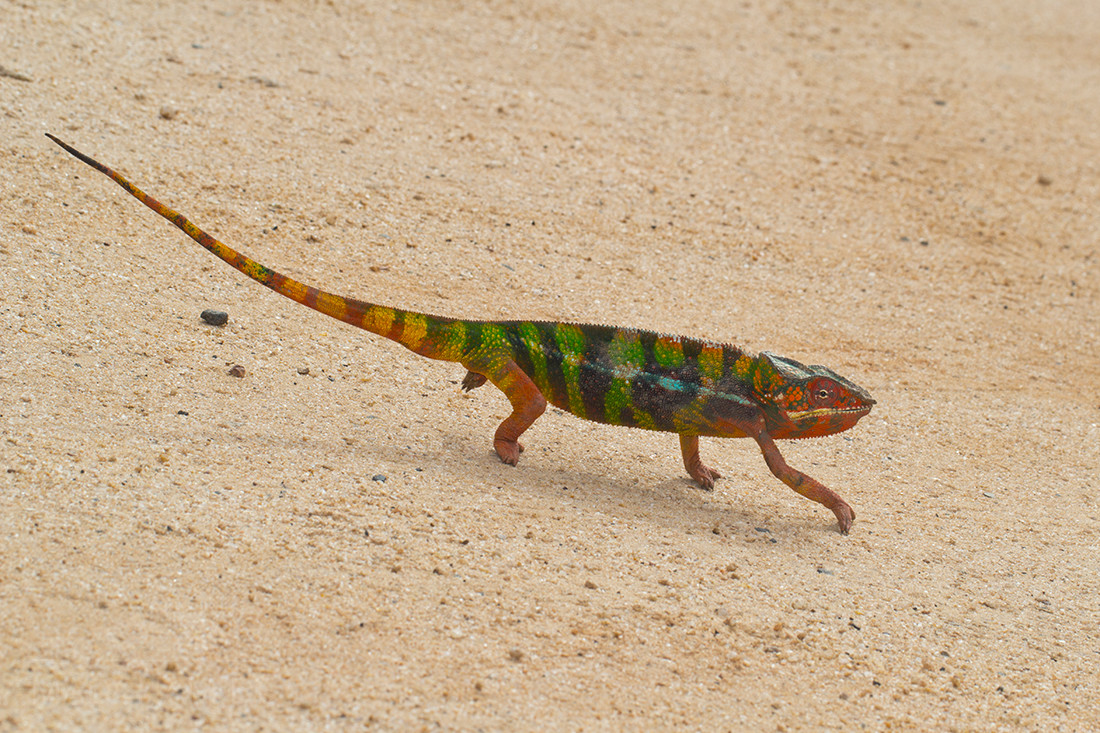 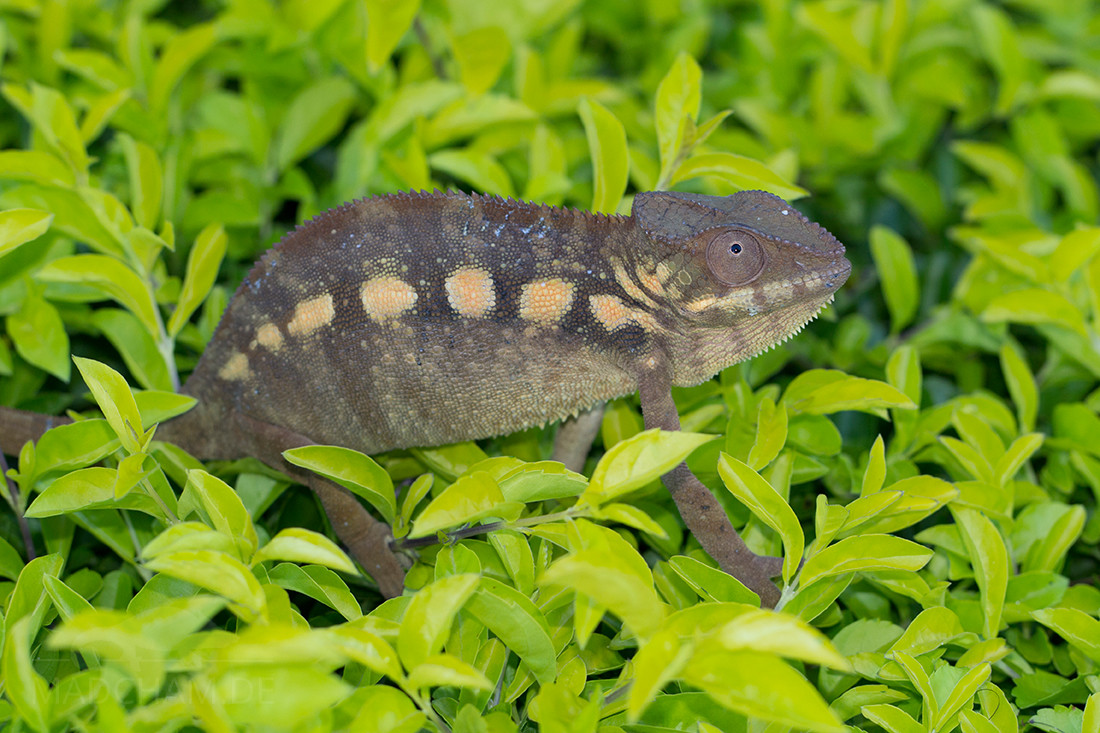 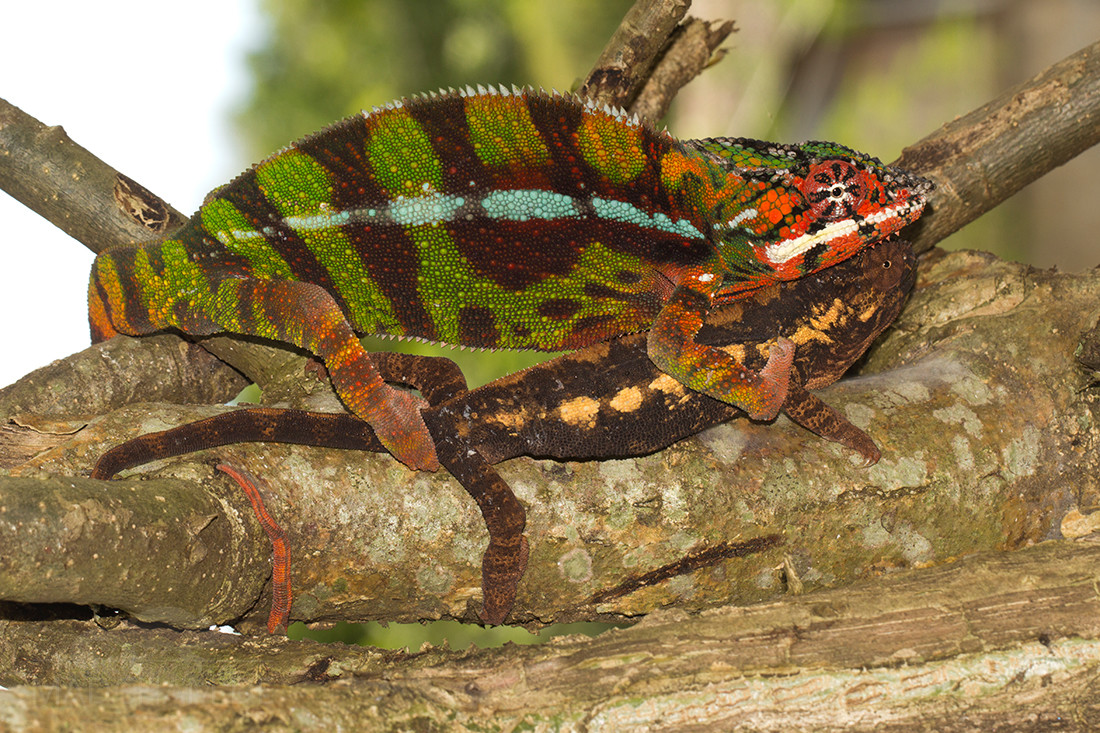 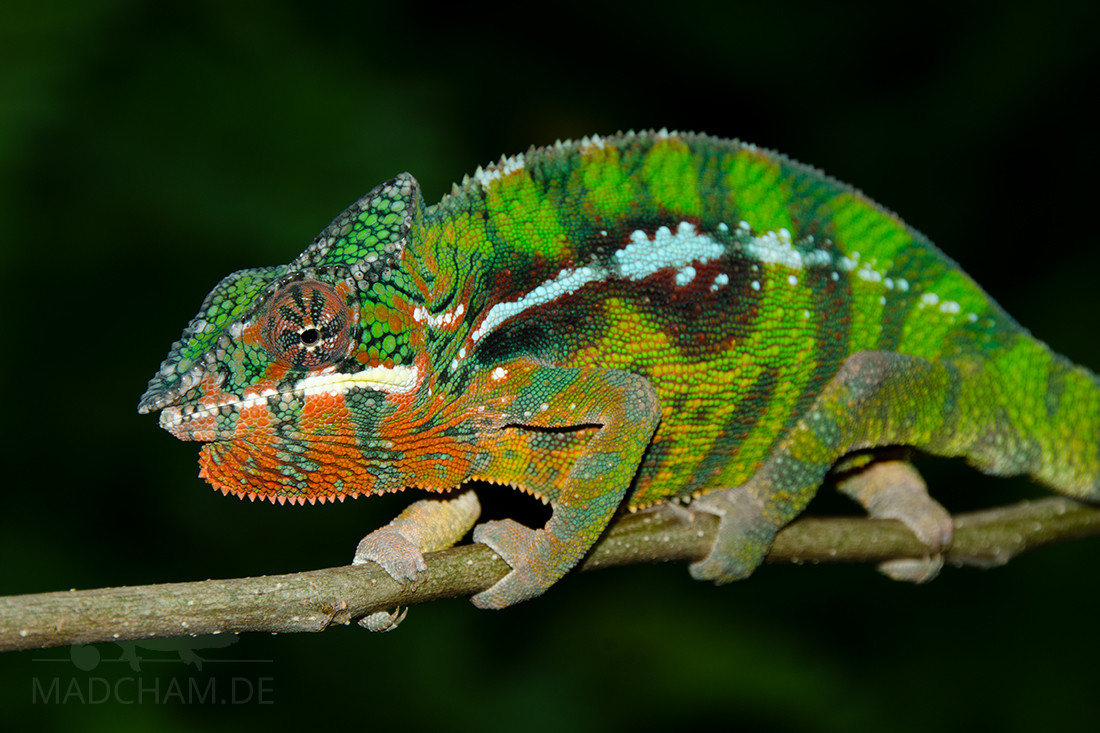 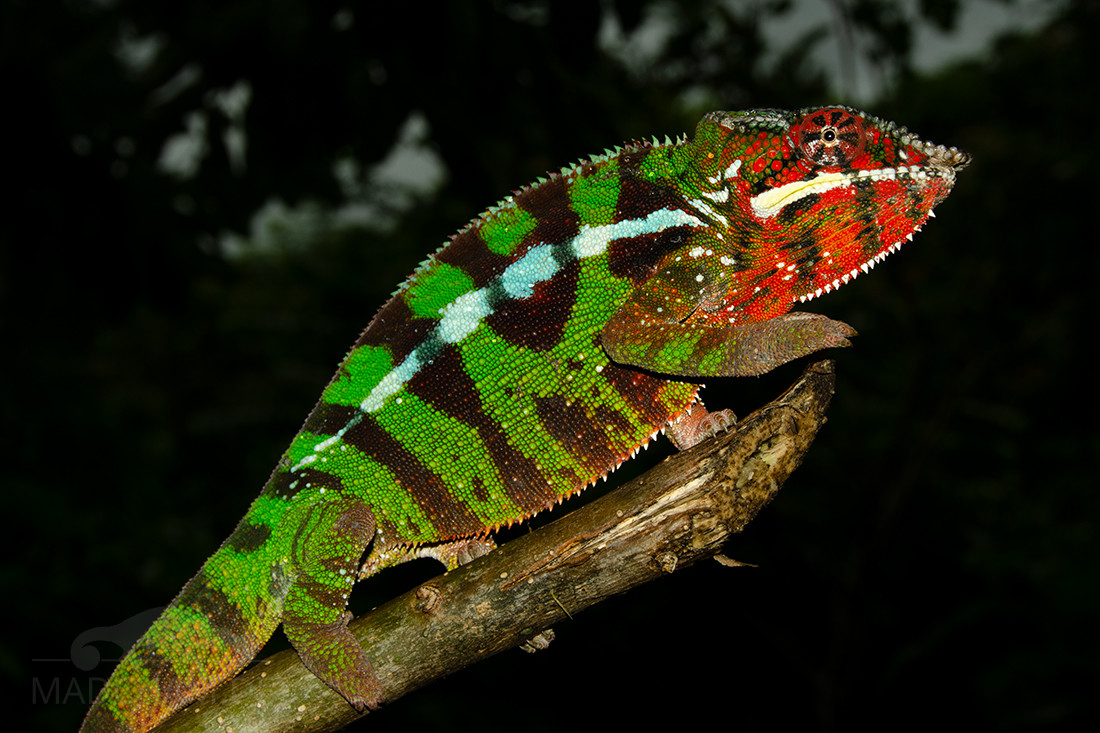 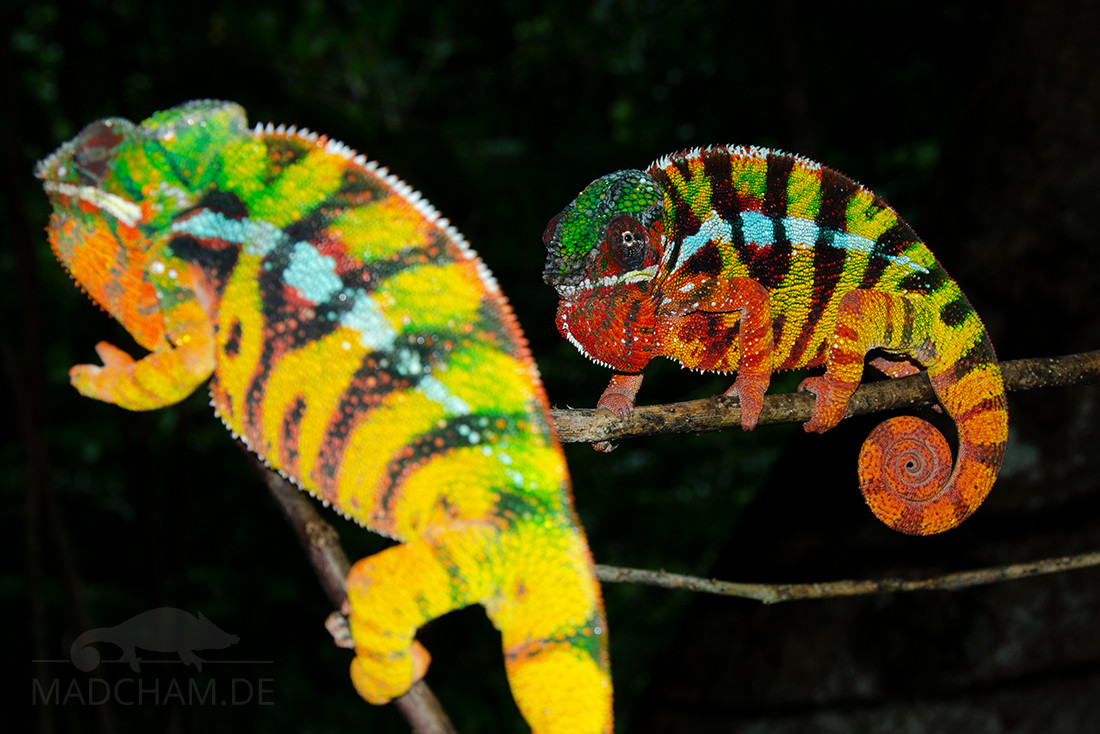 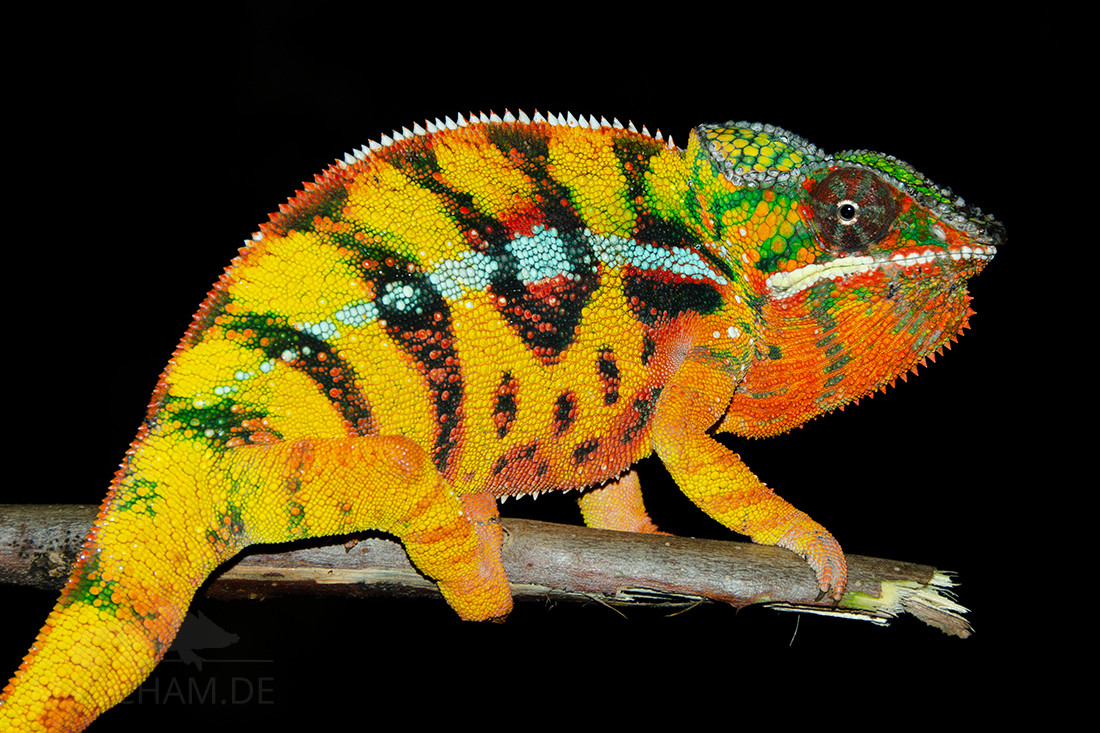 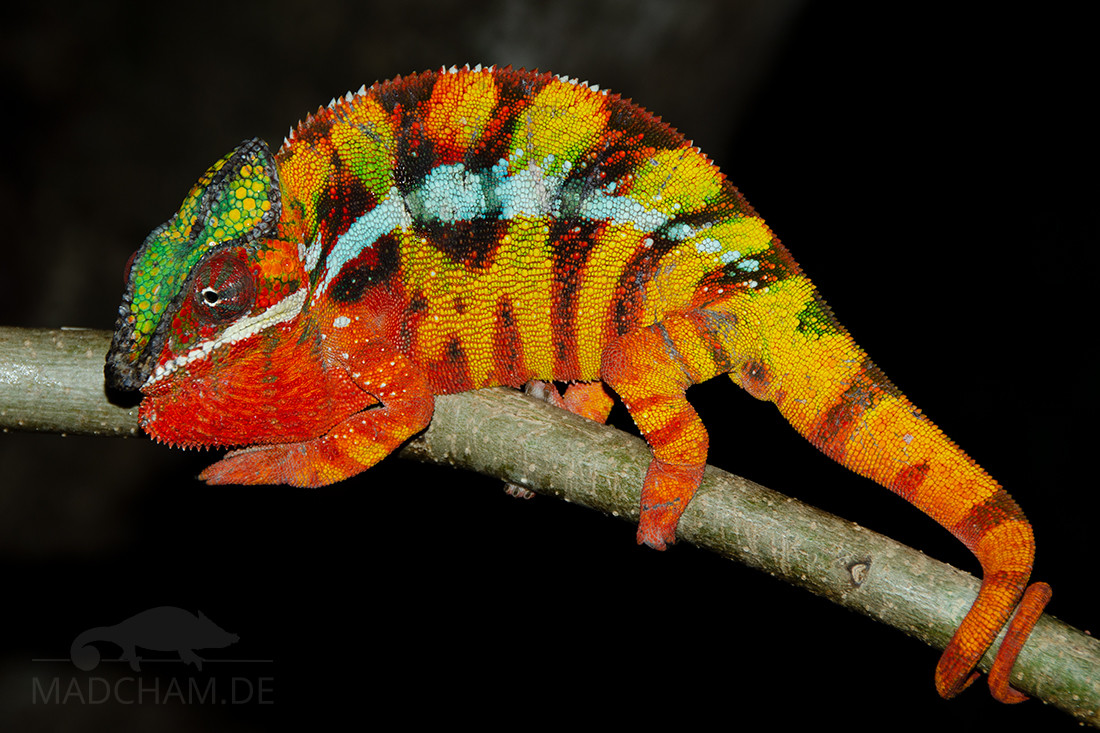 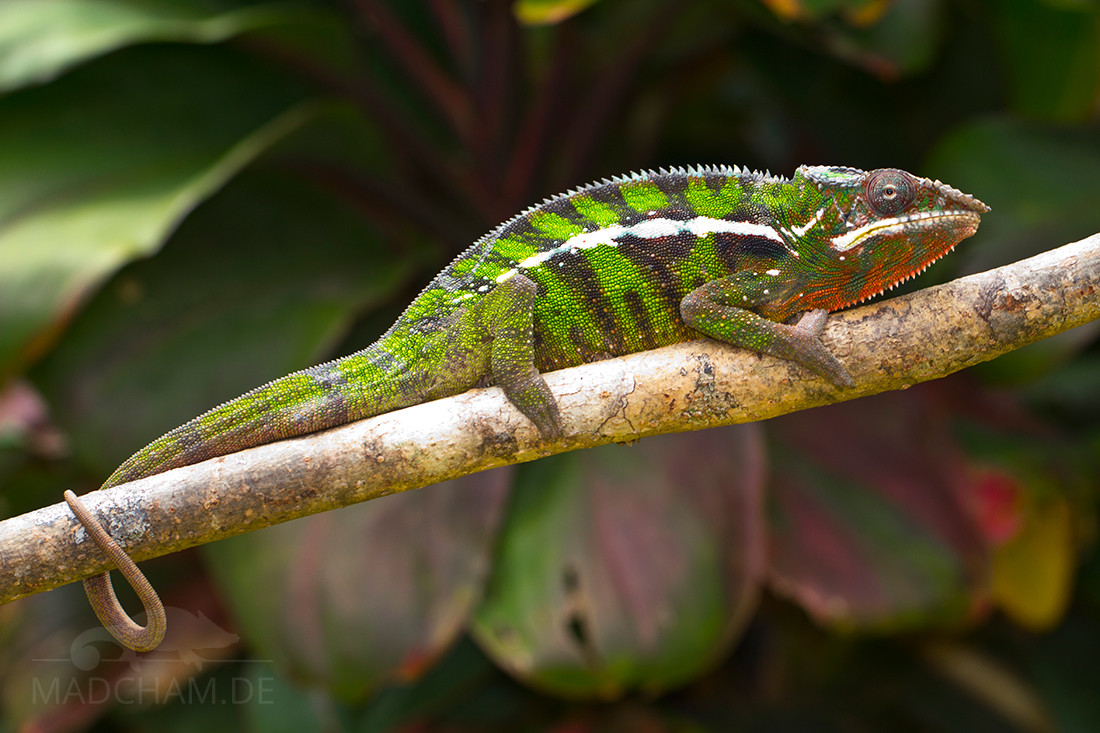 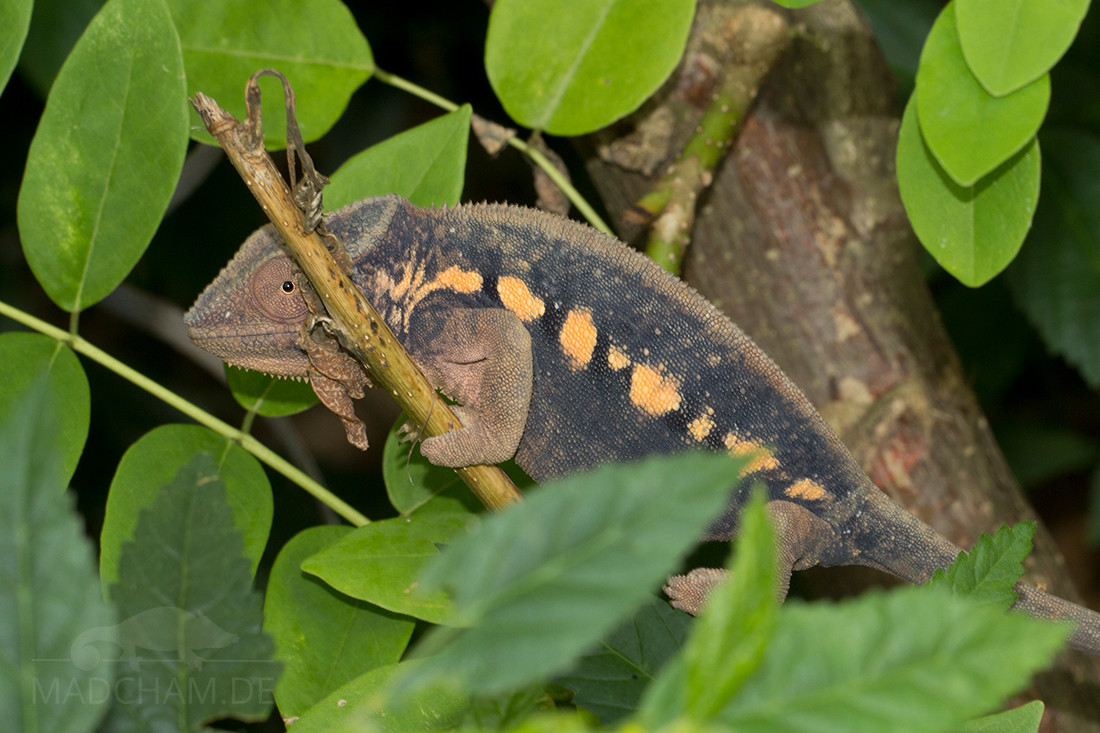 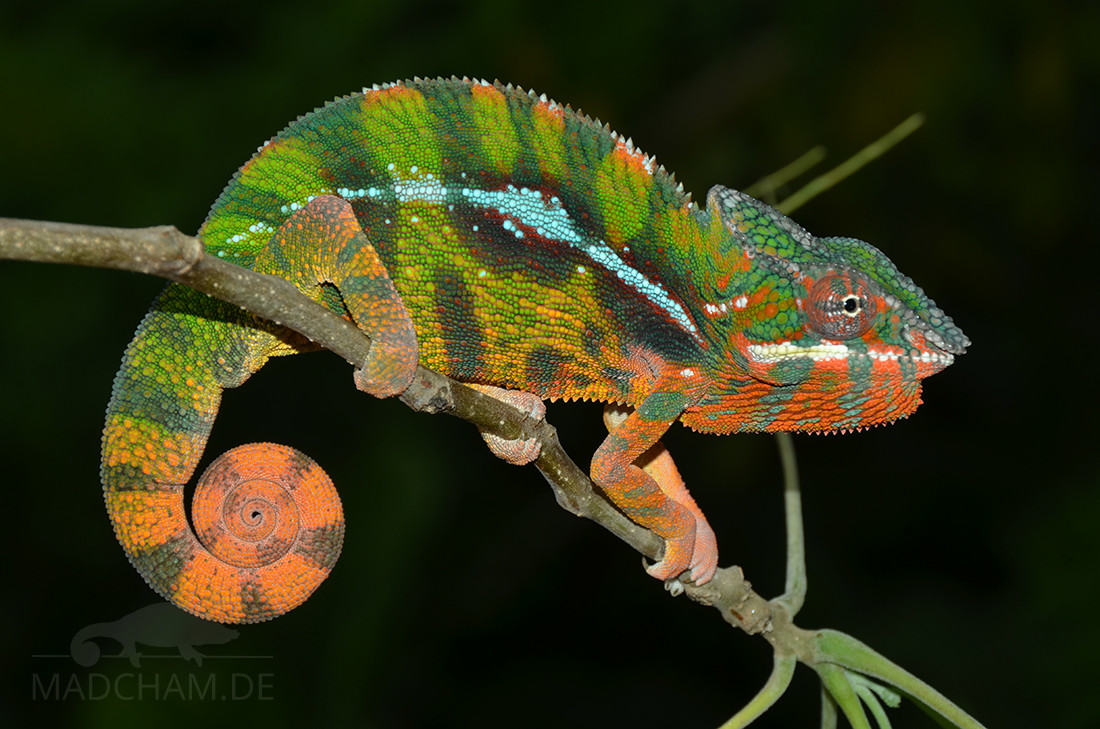 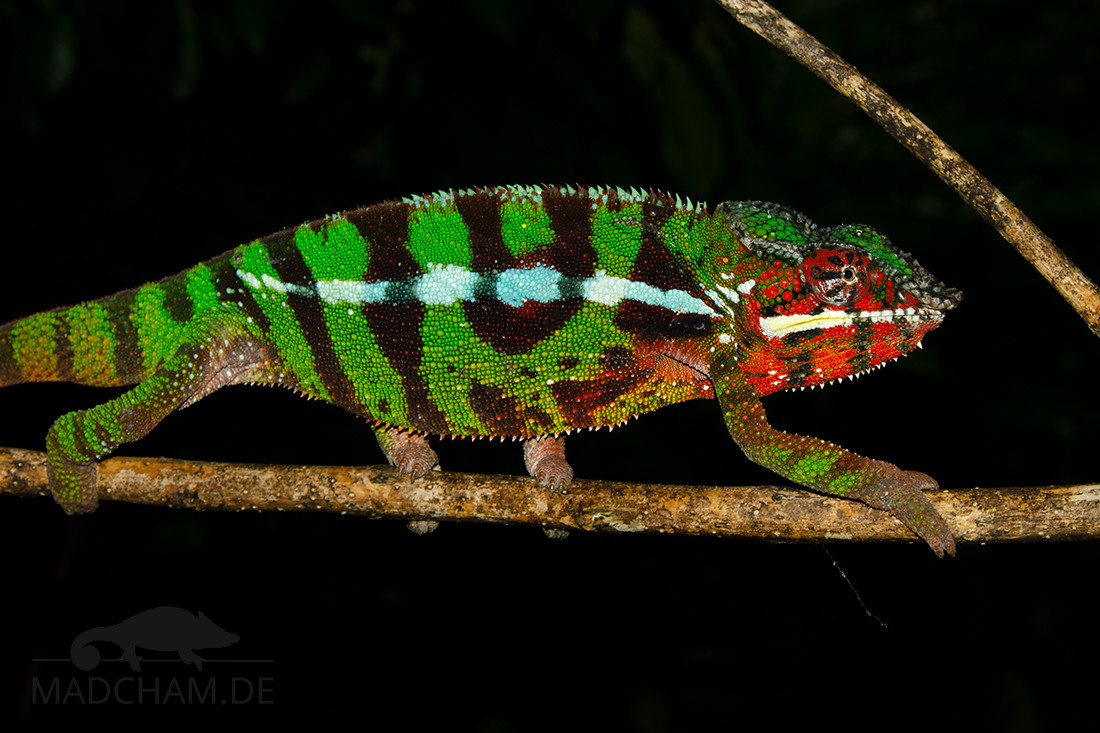 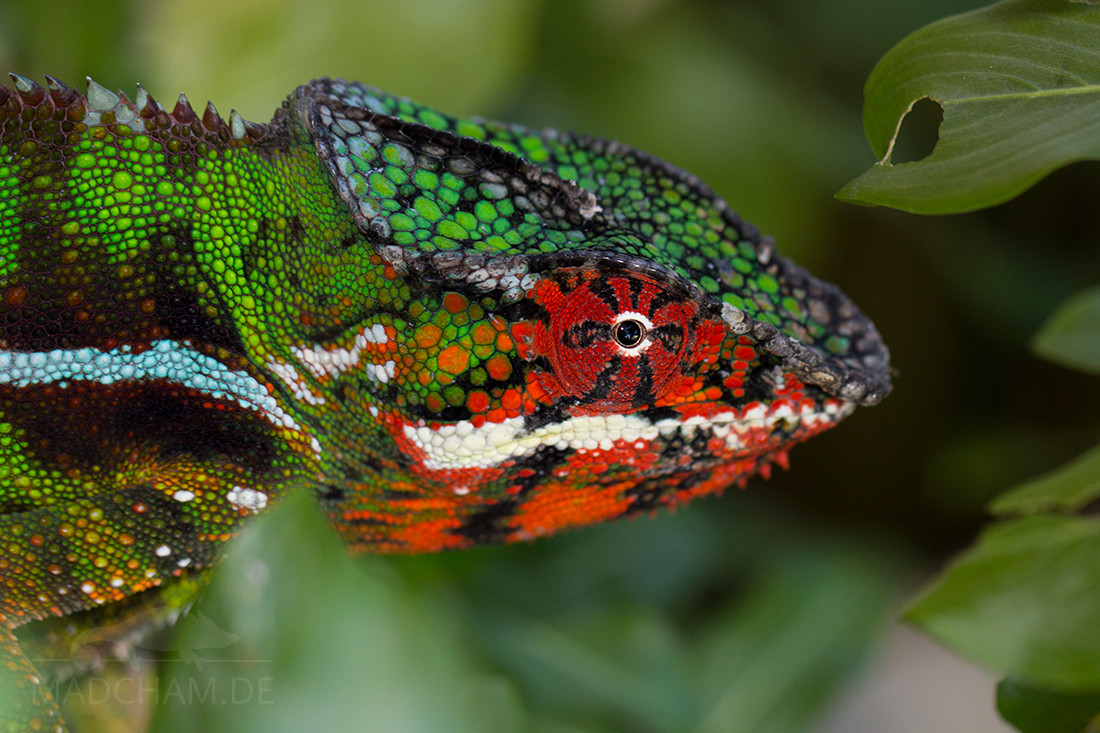 Distribution of the local form Sambava:

Sambava is located on Madagascar’s east coast in the Sava region in the Indian Ocean. The city has approximately 45.000 inhabitants and is famous as the “capital of vanilla”. Most people here subsist on working in the surrounding vanilla plantations or the related factories, few are fishers or have rice fields. Sambava has its own small airport, you can hardly reach this region by car. To the north, this distribution area of the local panther chameleons is limited by a large river called Bemarivo. The Lokoho river flows to the south, while various smaller rivers in the west divide the Sambava local form from the Marojejy local form.

The males of this local form in the relaxed state of mind are green on the body with black-red, very dark banding. The top of the helmet and nose is green, the rest of the head including the eyelids is always bright red. The throat pouch, chest area, and parts of the tail may extend even more into orange in younger animals. If the males are excited, the green colors on the body partly change to orange up to bright yellow tones.

Climate on Madagascar's north east coast, where Sambava is located, is humid and warm all year long. That is why the world famous vanilla can grow here, and chameleons like the climate, too. In rainy season from October to April, Sambava has warmer temperatures with over 25°C and often more than 30°C during daytime. In the night, temperatuers fall only a little, and humidity is enormously high due to steady rain.

In dry season, temperatures are cooler but almost every day reaches 25°C, in most cases temperatures rises a little above this point. In contrast to rainy season, nights during dry season cool down to 15°C. It rains a little less but still very regularly, approximately every other day. Precipitation is simply less long-lasting. Unfortunately, we have no ground temperatures for Sambava available yet.

In gardens, shrubs, bushes, and trees along the street, close to the beach, or in open terrain around Sambava, you can find panther chameleons here.