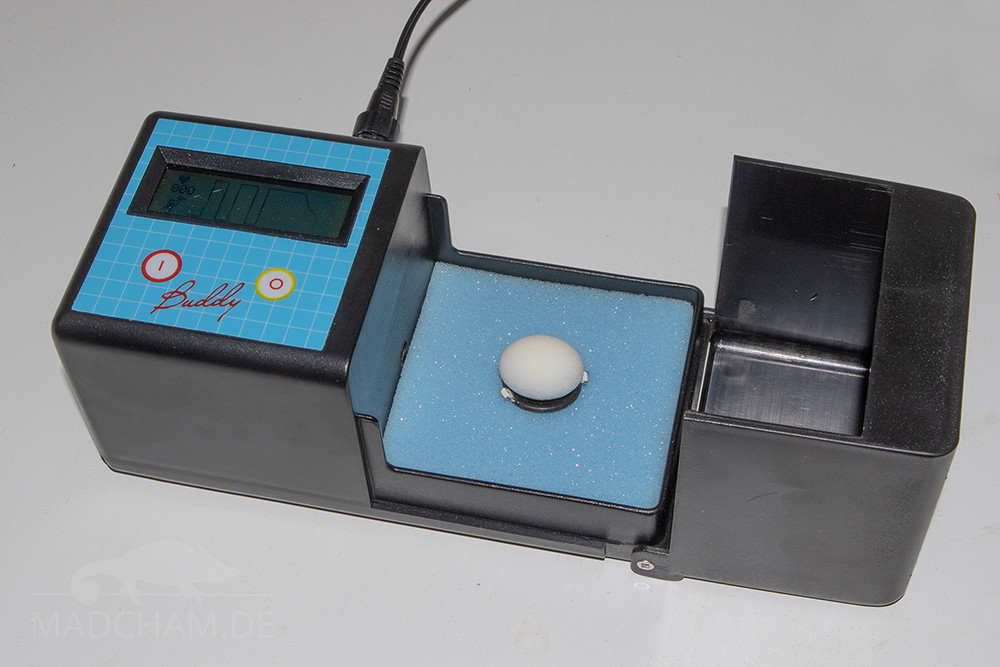 With an egg monitor, the pulse of an embryo still in the egg can be measured during incubation. Originally the Egg Monitor was developed for bird eggs. Most chameleon eggs are significantly smaller than those of birds and have soft instead of hard shells. Nevertheless, the device can be used for chameleons – we will explain in this article how to use it.

Where to get an Egg Monitor

We currently use the Buddy Mk2 device, manufacturer is Avitronics from Cornwall (England). In Germany the unit can be ordered by mail from Grumbach Incubators. It costs 343.18 €, the adapter for battery-free operation costs another 20.80 €. 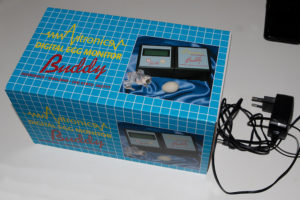 The first developed egg monitor, the Buddy Mk1, had a small infrared light lamp in the measuring chamber. Small sensors were attached to the sensor pad. The infrared light absorbed by the embryo was an indicator of the heart rate or pulse of the embryo. The Buddy Mk1 could only measure frequencies above 60 beats per minute (bpm).

The newer version, the Buddy Mk2, uses LED electrodes closer to the egg instead of a side-mounted infrared bulb. It is more suitable for thick-shelled eggs in birds and is therefore also the preferred option for chameleons. The Buddy Mk2 can also display pulse frequencies below 60 beats per minute.

Why measure the pulse of embryos?

Originally, an idea in chameleon husbandry was to use the Egg Monitor to find out the appropriate incubation conditions, especially for very rarely kept species. A clutch of eggs is divided into several boxes, which are then incubated at different temperature regimes. By means of the Egg Monitor, weak or dead embryos can be detected early and the respective incubation method can be excluded. Unfortunately, the Egg Monitor has been little used for this purpose so far, probably mainly due to the costs.

Up to now, the Egg Monitor has mainly been used to separate fertilized from unfertilized eggs and to check eggs for living embryos. 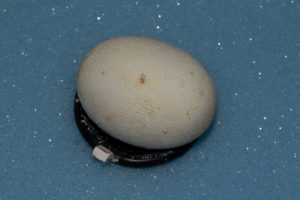 Egg of Calumma parsonii on the sensor pad

The regular measurement of the embryo pulse in the egg also serves to sort out dead embryos. The sooner a dead chameleon embryo can be detected in the egg, the sooner the egg can be opened, swabbed for virology and bacteriology and the dead animal can be sent for a pathohistological examination by the veterinarian or a specialized laboratory. Only by means of diagnostics, the cause of death of dead embryos can be determined – this is particularly interesting in the case of rarely kept species or an unusually large number of embryos that die within a short period of time. If you wait until the egg of a deceased embryo collapses, the embryo itself is usually already in the process of autolysis (dead body cells are destroyed by the body’s own enzymes) and is then no longer diagnostically usable.

The Egg Monitor may even be used to determine the time of hatching, and in very rare species, where incubation conditions are often not yet optimized, it may be used for hatching aid.

Reading the display is very easy. It shows a small heart, a number and a bird symbol. If the bird moves its wings up and down, a living embryo can be assumed. The number counts the heartbeat per minute. If the heart is flashing, the egg monitor is measuring at that very moment. The line shows – roughly similar to an ECG – the pulse of the small chameleon.

The following video shows how the Egg Monitor works at best: The egg is carefully removed from its incubation box and then placed on the black sensor pad. The measuring chamber is closed. The display now shows a pulse.

How fast the Egg Monitor can measure a pulse depends on the size and thickness of the egg and the position of the embryo. Some eggs cannot be measured as easily as others. So you need some patience to find a pulse in some eggs. Sometimes it helps to turn the egg carefully in the horizontal plane to find the “right position” for measuring.

Be careful! The sensor is very sensitive to vibrations. The table on which the Egg Monitor is used should not be touched during the measurement. Mobile phones or other vibrating devices should not be placed on the table, nor should you write down data by hand directly next to the Egg Monitor. All these movements can interfere with the measurement.

Evaluation of the measured values

If the Egg Monitor shows a pulse rate, a living embryo in the egg can be safely assumed.

A zero line without any deflection indicates that the Egg Monitor either cannot find a pulse or the embryo is dead. However, in the case of still living embryos, where only the pulse is difficult to find, the display usually shows at least one “undirected pulse” in the form of individual rashes and wave movements. An egg that shows such “undirected wave movements” should definitely be incubated further. With a high probability, the embryo is still alive.

A pulse can only be measured after a certain number of days in the egg. As long as the developing embryo is still a “cell cluster”, there is, of course, no pulse to be measured. In the early egg phase, therefore, a non-existent pulse does not necessarily mean that the egg has died unfertilized or fertilized.

After multiple measurements at different times of day constantly displaying a zero line without any individual rashes or undirected wave movements, the embryo is most likely dead.

During slide breaks or under cooler incubation temperatures, lower pulse frequencies are to be expected.

Unfortunately, there are no studies on the use of the Egg Monitor with chameleons. Anecdotally published values are shown in the following table. We ourselves have used the Egg Monitor mainly with Calumma parsonii parsonii eggs. Due to the somewhat unsuitable size of the chameleon eggs in contrast to bird eggs, the measurement results were rather difficult to obtain.

Sensitivity and mobility of the embryo

Vibrations of the surface on which the Egg Monitor is placed can influence or falsify the measured values as already described. However, not only the Egg Monitor itself is sensitive to vibrations, but also the embryo itself. If the egg is touched with the finger during the measurement, the pulse rate of the embryo immediately increases and remains increased for several seconds.

Could the embryo possibly actively turn away? This question has been on our minds for quite some time because of a phenomenon that we encounter time and again during measurements with the Egg Monitor: The display shows a continuous pulse rate. However, without moving the egg or causing any other disturbance, the measurement stops suddenly and is resumed just as suddenly – just as if the embryo had moved out of the “measuring range” and back in again.

If you also use an egg monitor, write us a message! So far, only a few chameleon keepers use such a device, and we would be very happy about an exchange of experiences.