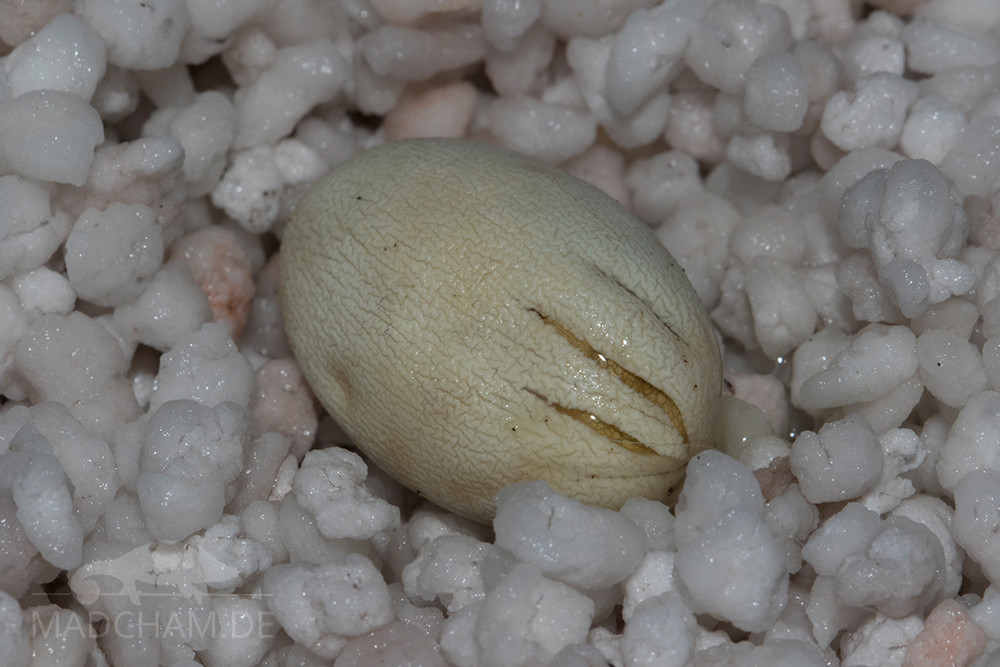 Chameleon keepers still discuss what provokes a clutch to hatch simultaneously. Changes in barometric pressure as it is the case with beginning, on-going precipitation may play a role. Depending on the species, a clutch may hatch almost at the same time  (as in panther chameleons) or over few days or even weeks (as in Parson’s chameleons).

One day before hatching, the eggs already signalize the upcoming event. Suddenly the eggs shrink (they become smaller) and small droplets become visible on the eggs’ surfaces. The eggs are “sweating”. During the next 24 hours, the hatching juvenile cuts the shell with its egg tooth. In chameleons, the egg tooth is a tiny, single tooth, protruding frontally. Usually, this tooth breaks while the juvenile is hatching, but in some cases you can still recognize it in freshly hatched juveniles.

The eggs are cut paralelly on the poles of the egg. When the juvenile succeeded to make several cuts, it pushes the head out first and stops for a little break. In this time it resorbs a part of the yolk sac and changes from embryonic breathing to lung breathing. Later, the juvenile struggles bit by bit to get out the egg. Hatching is very exhausting for juveniles.

Not all juveniles are able to cut the shell

From time to time, juveniles might struggle to hatch successfully, especially in species which lack data of successful egg incubation. Single juveniles cannot get out the shell, or are not able to cut the shell sufficiently. Besides a weak juvenile reasons may be incubation, too. For example, eggs from Calumma parsonii parsonii tend to have very thick egg shells after an unbelievably long incubation time. Everyone has to decide for oneself whether he or she wants to assist struggling chameleons in cutting the shell or not. In rarely kept species with offspring being important for further existence of the species in captivity, and when it seems very probable that non-perfect incubations is the cause for hatching problems, we think assisted hatching is acceptable. But we also think it is better to go without assistance in commonly kept species.

Normally you wait until a juvenile cuts the egg. If it does not move on during the next twelve hours, you can gently help by cutting a small piece of the shell with blunt scissors. Free the head of the juvenile from mucus and let it stay inside the egg. Most juveniles will be able to come out a little later by their own. Please be aware that you can also injure a juvenile unintentionally when cutting an egg and that juveniles may die when “helped” too early.

Freshly hatched chameleons may have a large yolk sac. Those juveniles should not be place immediately in an offspring terrarium. To avoid the yolk sac from being injured or even ruptured, place these juveniles in a small box with wet kitchen paper. After 24 hours, the yolk sac should be absorbed and the juvenile can move to its first terrarium. As long as a juvenile still has a yolk sac, the juvenile does not need to feed on insects. Usually chameleons will not begin to eat before the yolk sac has disappeared.