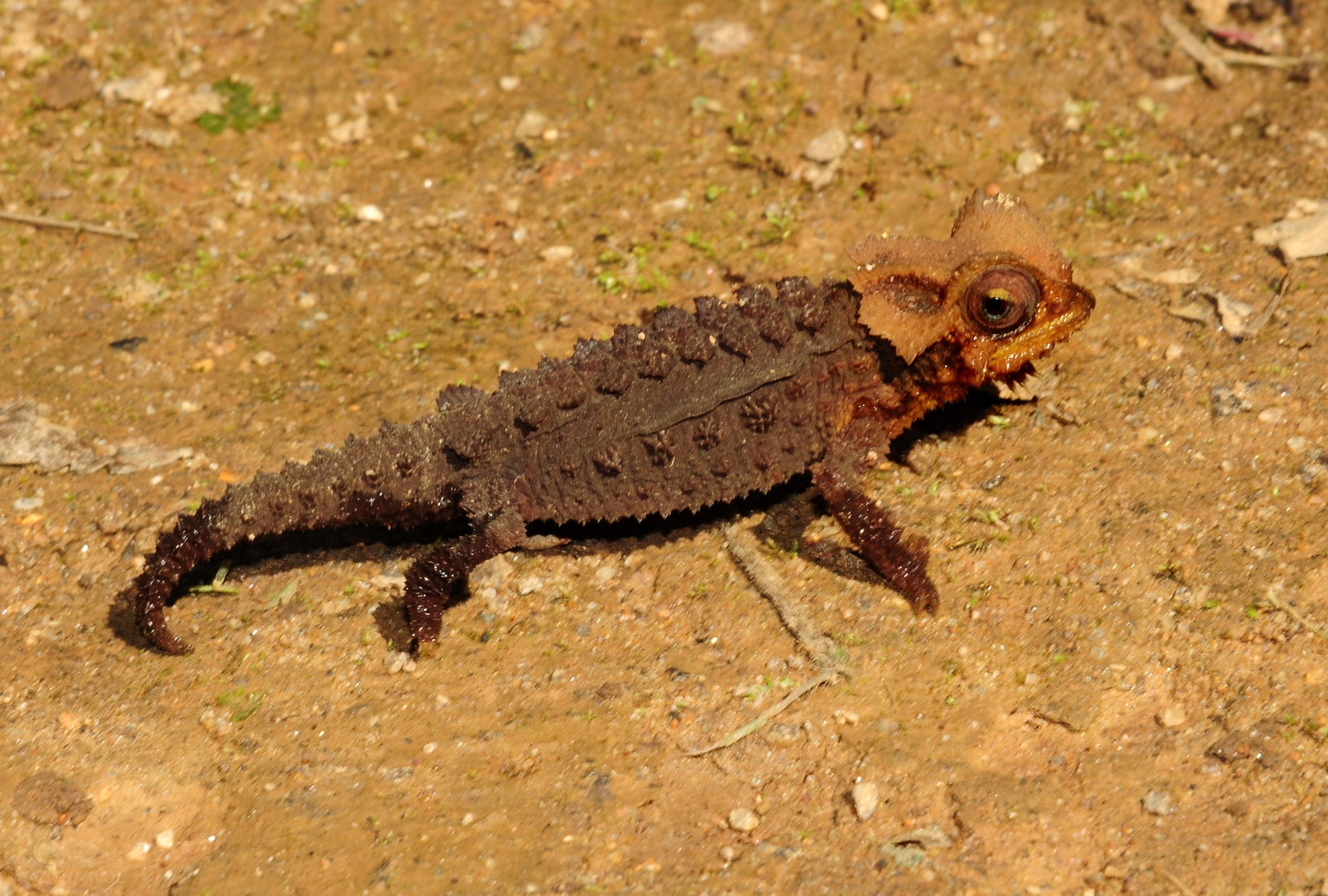 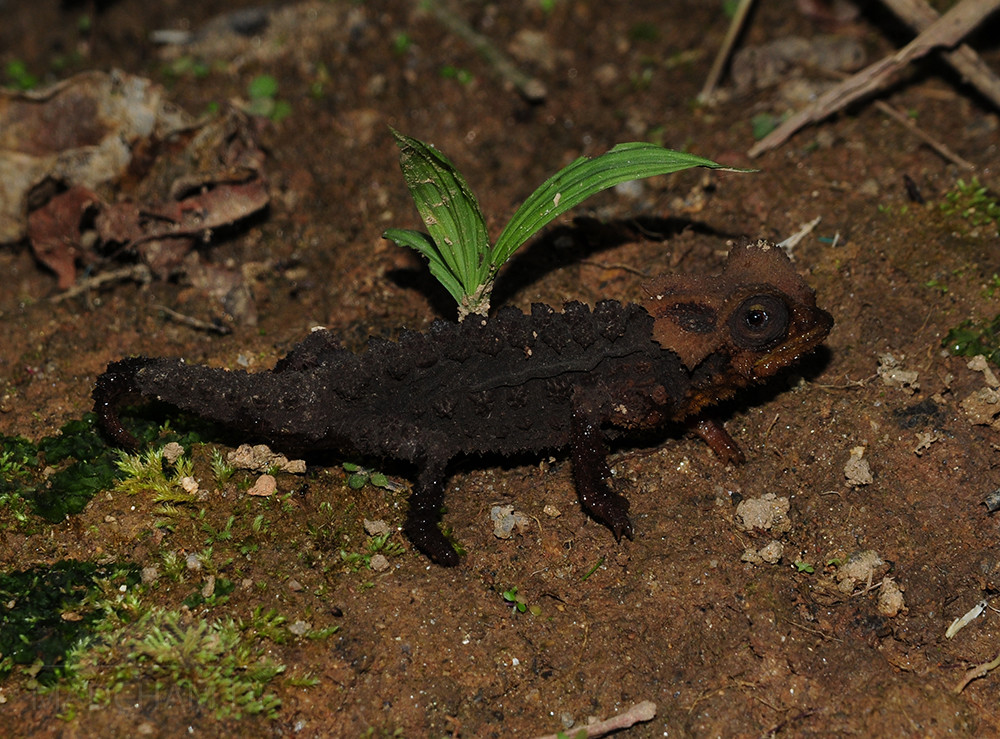 Fernand Angel described this chameleon species in his function as an assistant taxidermist using a prepared animal that was kept in the Natural History Museum of Paris (France). The chameleon was originally brought from Madagascar by the botanist Jaques Léandri. However, Léandri could not catch Brookesia perarmata himself but bought it from a Madagascan with the help of the local colonial administrator at that time, Tiverné in Antsalova. He then kept the chameleon himself for a short time, but it died soon – probably due to a lack of knowledge about keeping and feeding it. Angel originally named the species Leandria perarmata after the finder. The Latin per armata means translated “armed”, alluding to the unusual appearance of the species.

This unique chameleon only occurs in a very special habitat, the Tsingy de Bemaraha national park in southwest Madagascar. Between meters high needlestones, deep down on the ground, there are small, humid oases – and near the Tsingys, there are dry forests which the animals conquered to live there. They are comfortable in foliage, low shrubs or shrubby greens. You can visit Tsingy de Bemaraha only during the dry season because the roads lead through endless kilometers of offroad tracks. Sadly, the dry season is the worst time to find chameleons. Indeed it is extremely difficult to discover Brookesia perarmata at all.

This species has a very special appearance with numerous spines on the head and body. Along the back and the belly, there are rows of pyramid-shapes tubercles that continue on the tail. The eyelids and parts of the large helmet are usually somewhat darker. Brookesia perarmata reaches a total length of 11 cm. Adult individuals have a yellow head and a brown body, which sometimes fades into orange. Young ones are less conspicuous with fewer spines and relatively uniformly beige colored.

No other leaf chameleon has a similar spectacular appearance. In 2020, osteoderms, i.e. bone plates within the skin, were detected in the skin of this species for the first time. Osteoderms are not known from any other chameleon worldwide so far. Moreover, Brookesia perarmata is the only species who made it to Appendix I of CITES. Trade with this species is strictly forbidden.

Climate in Tsingy de Bemaraha is mainly one thing: Hot. Dry season here reaches from April to November, and this time is characterized by droughts that last for months. Usually it does not rain even one single drop for most of the dry season. One rain day per month might be the luckiest moment for people there. Few humidity remains in the small green oases between the Tsingys. During dry season, tempertures drop suddenly at night down to 10°C. But during the day, it might have 20°C and warmer.

The short rainy season serves as recreation for the plants between the Tsingys. Temperature even raise more during the day and may even reach 40°C mark. At night, temperature drop in rainy season is less strong.

Unfortunately, we have no UVB indices for Tsingy de Bemaraha available yet.

Unfortunately, we have no ground temperatures for Tsingy de Bemaraha available yet.

The following pictures show the habitat of Brookesia perarmata in the Tsingy de Bemaraha. This species does not live on the Tsingys, the needle stone rocks, but in the leftover isolated pieces of forest in between. The dry forest has a thick foliage layer on clay soil and much deadwood. Only during the rainy season, plants are green and blooming. During the dry season, the forests are rather sparse.

Below you will find some 360° pictures from the Tsingy de Bemaraha. With the mouse, you can rotate in all directions. If you click on the Theta logo, the images will open in an enlarged view in a separate window. There is also the possibility to execute the pictures in full-screen mode. Have fun looking at them!