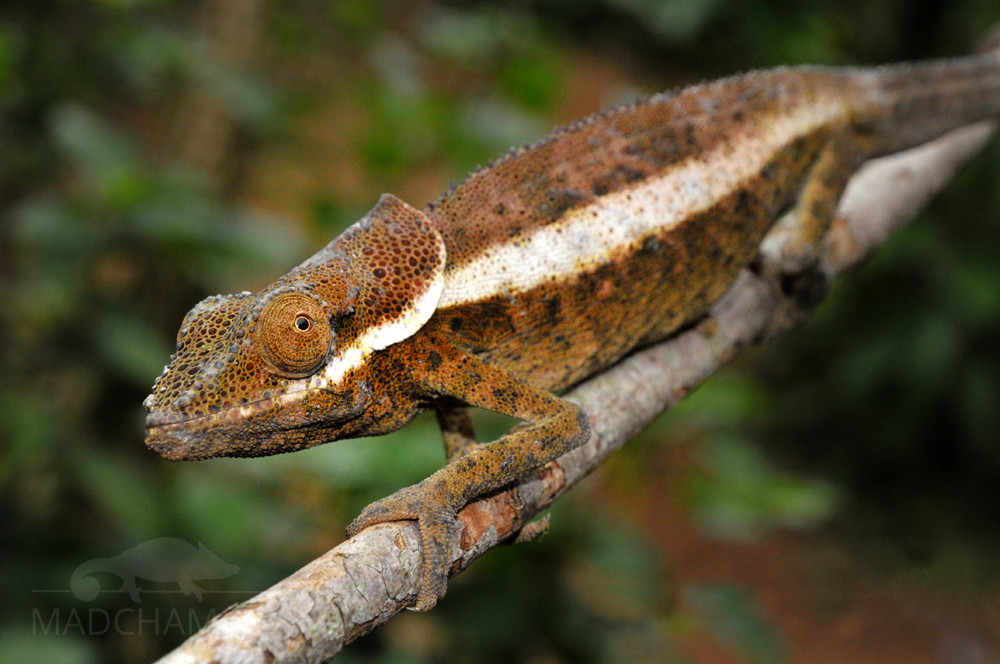 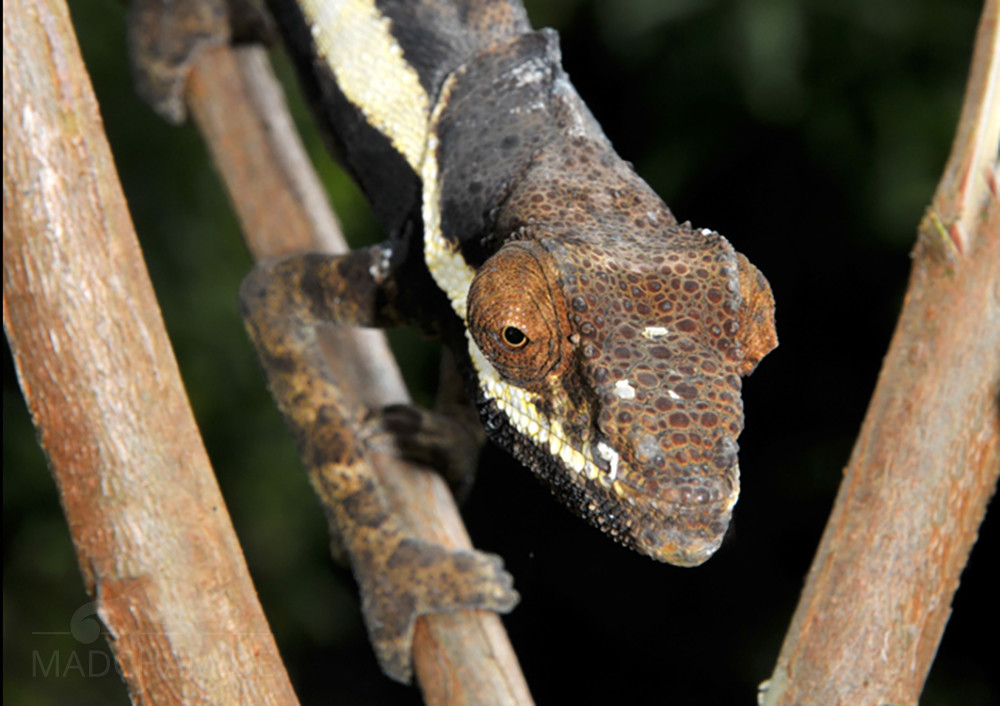 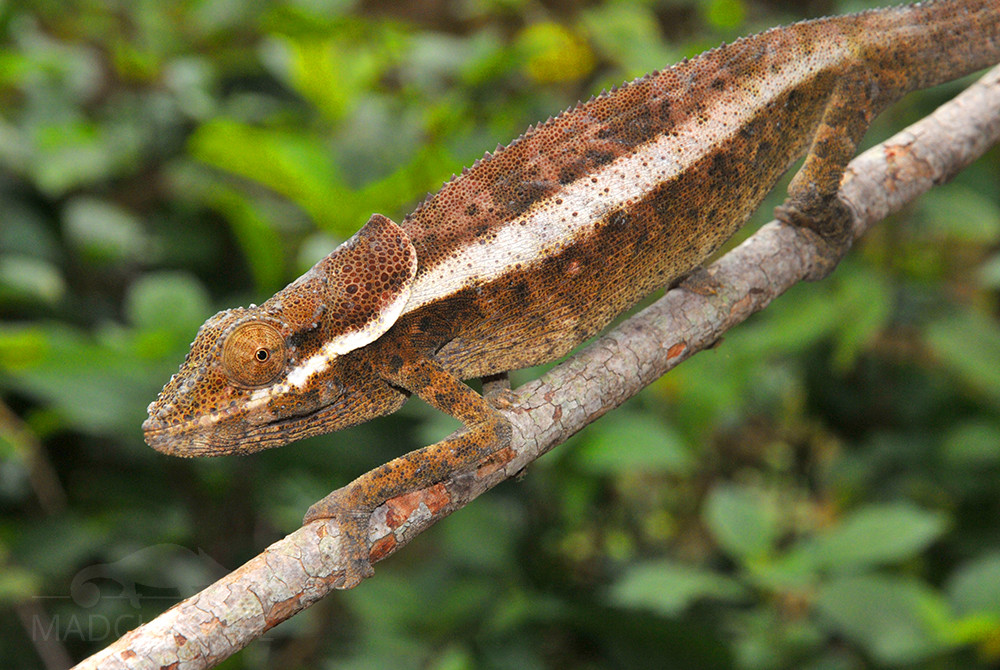 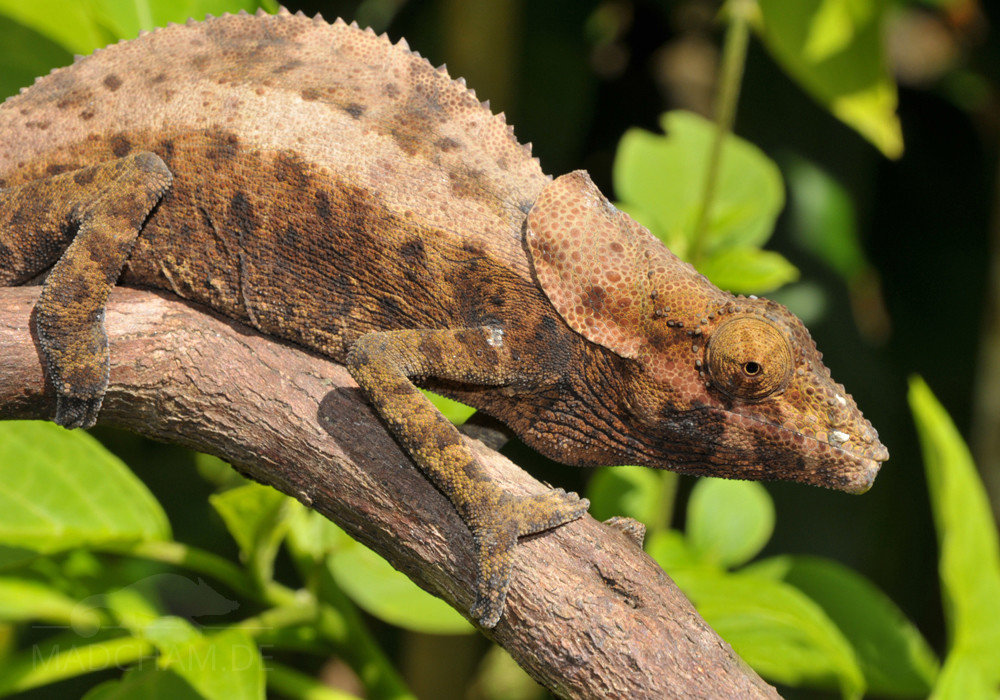 The English zoologist John Edward Gray was very brief in his description of this chameleon species: it consists of just keywords instead of a coherent sentence. In 1831 Gray was busy cataloging the reptile collection of the zoological department of the British Museum in London (Great Britain). One may assume that Gray borrowed the name of the chameleon species from the Latin cucullare. It means “hood” in English and probably describes the “hooded”, large occipital lobes of these chameleons.

The habitat of Calumma cucullatum extends from the eastern foothills of the central highlands of Madagascar of Vohidrazana to the evergreen rainforests of the Masoala National Park. Preference is given to dense rainforest areas. This type of chameleon is extremely difficult to find. Our finds are limited to the west of Masoala National Park and a small area near Vohidrazana.

Calumma cucullatum is one of the larger chameleons with a total length of 31 to 38 cm. At the casque, they wear large occipital lobes connected at the upper base. They can be spread when excited to look more impressive. With some males, the rust ridge ends in two small snub noses. The dorsal crest alternately shows small and greatly enlarged conical scales, which are lacking in the throat and on the belly. The males are reddish-brown or grey and show a broad lateral stripe in stress, which extends from the corners of the mouth to the tail. The eyelids and a stain behind the shoulder are dyed blacks. The females are brown-green and shimmer yellowish at the throat and in the shoulder area.

The following photos show parts of the habitat of Calumma cucullatum in Vohidrazana and Marojejy. The forest area of Vohidrazana, where the animals still occur, is located on a very steep slope and is difficult to access. It is full of secondary vegetation with thin trees and lots of bushes.

In the following, you will find some 360° pictures of the area near Vohidrazana. With the mouse, you can turn in all directions. If you click on the Theta logo, the pictures will open in a separate window in an enlarged view. There you also have the possibility to view the pictures in full-screen mode. Have fun while watching!