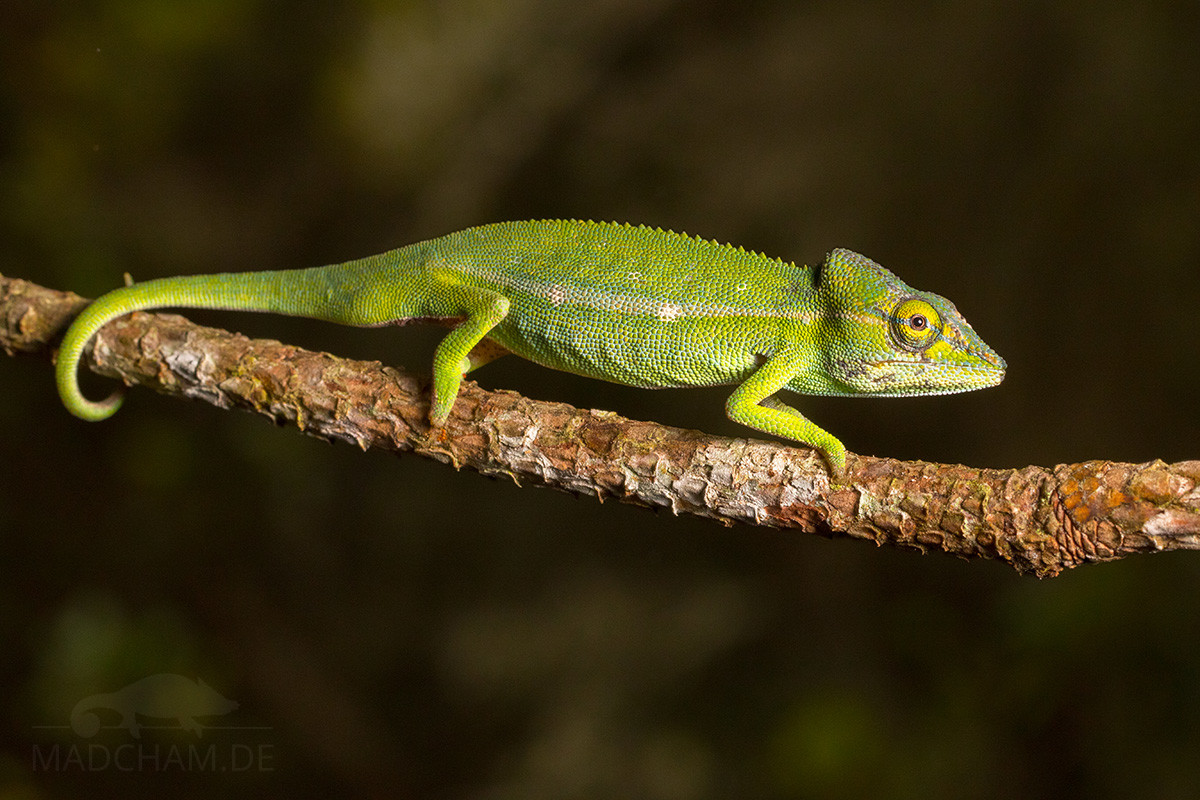 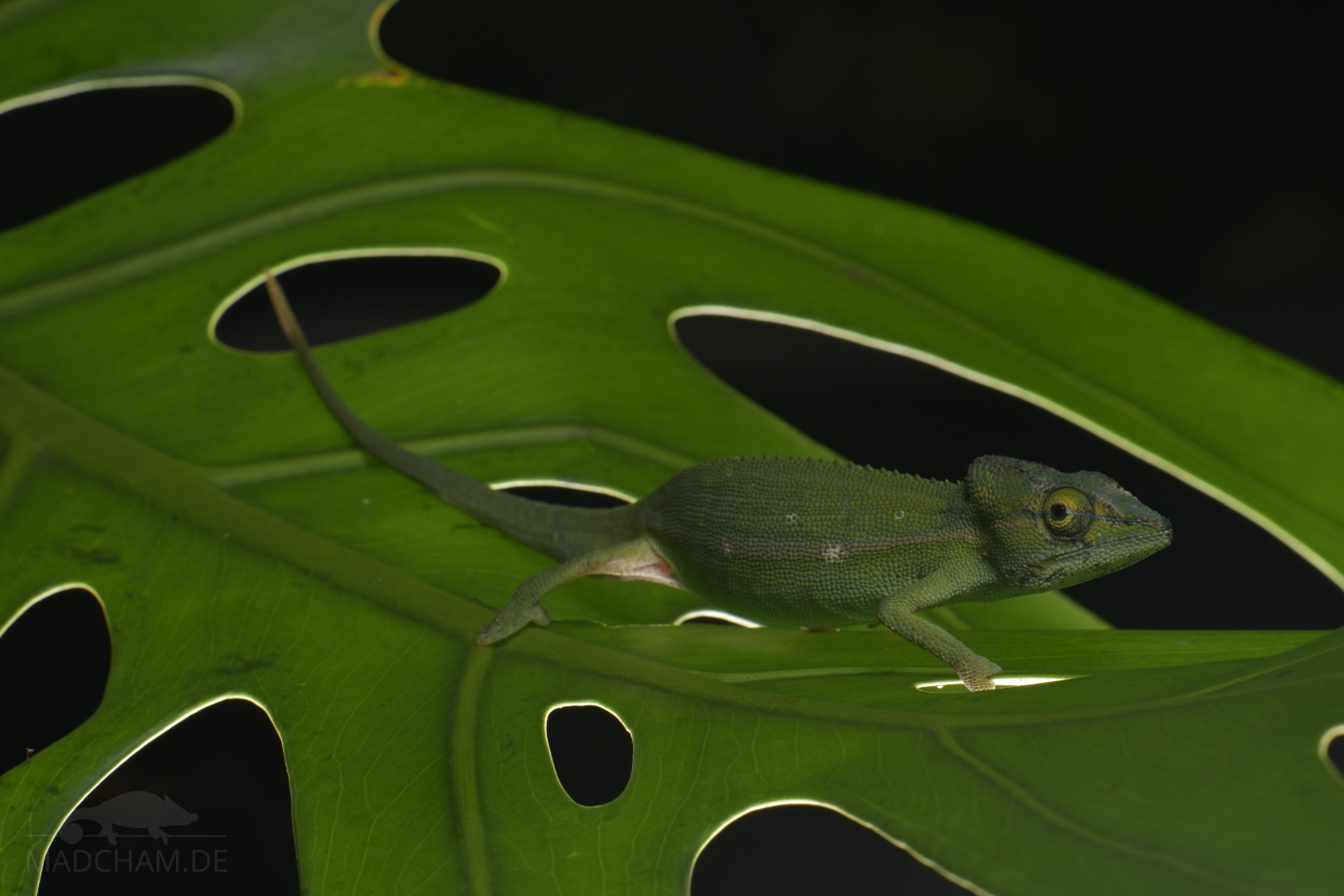 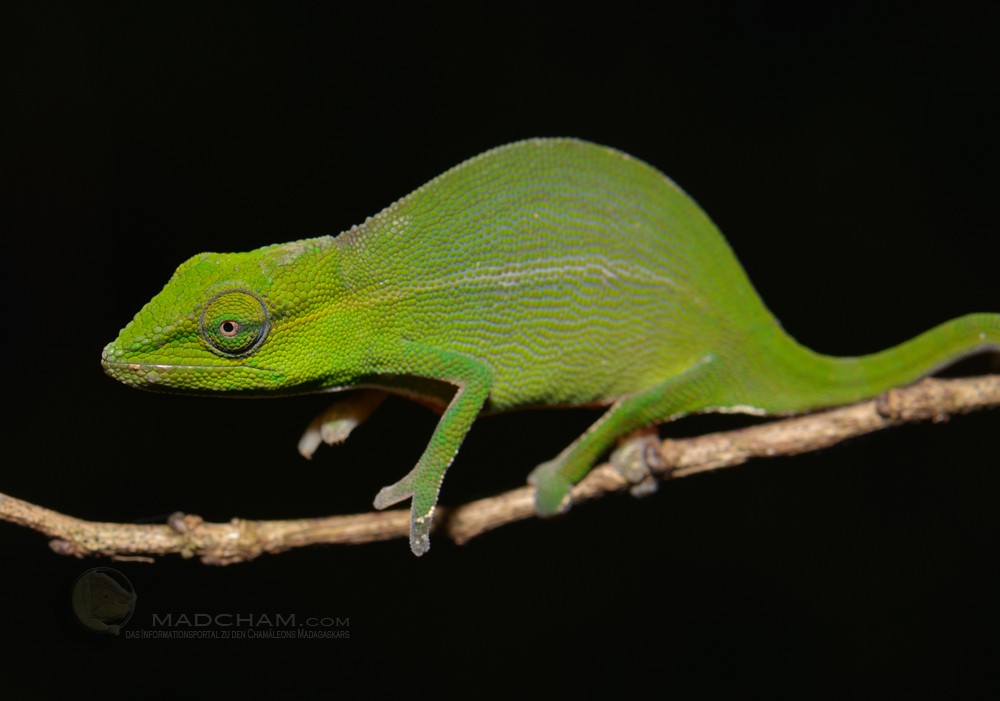 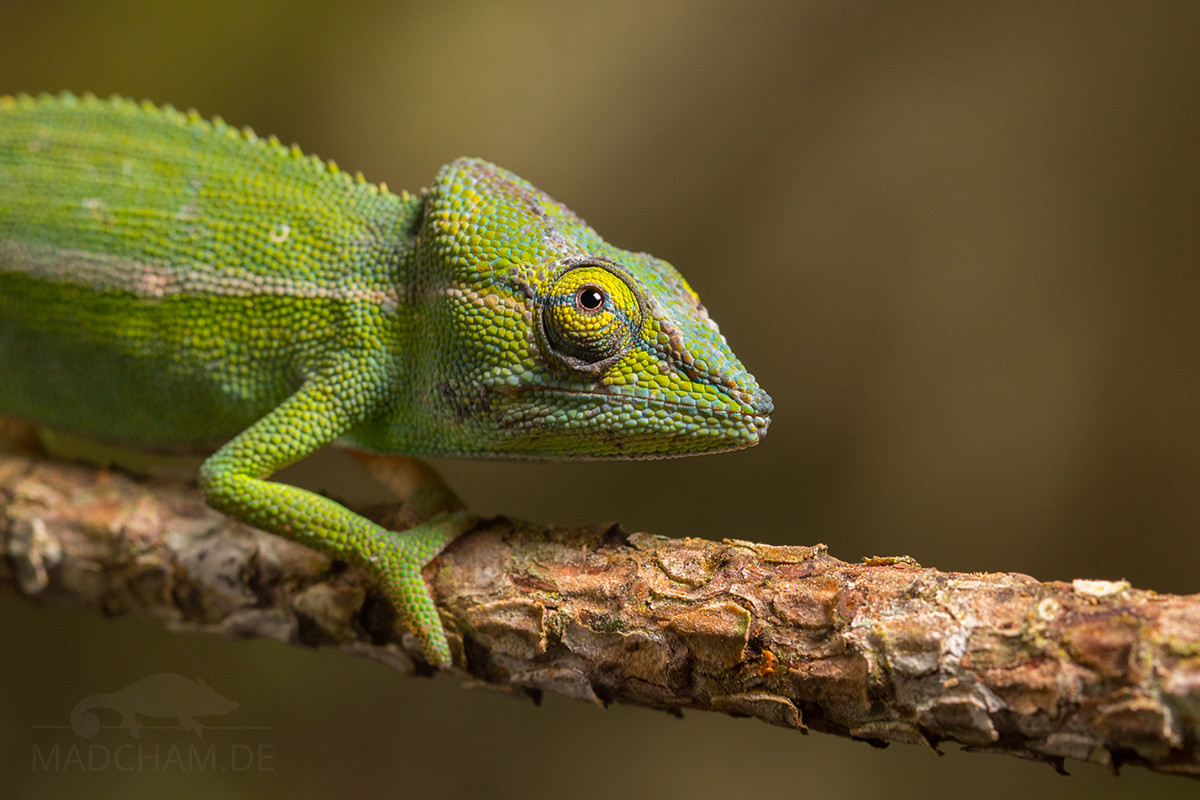 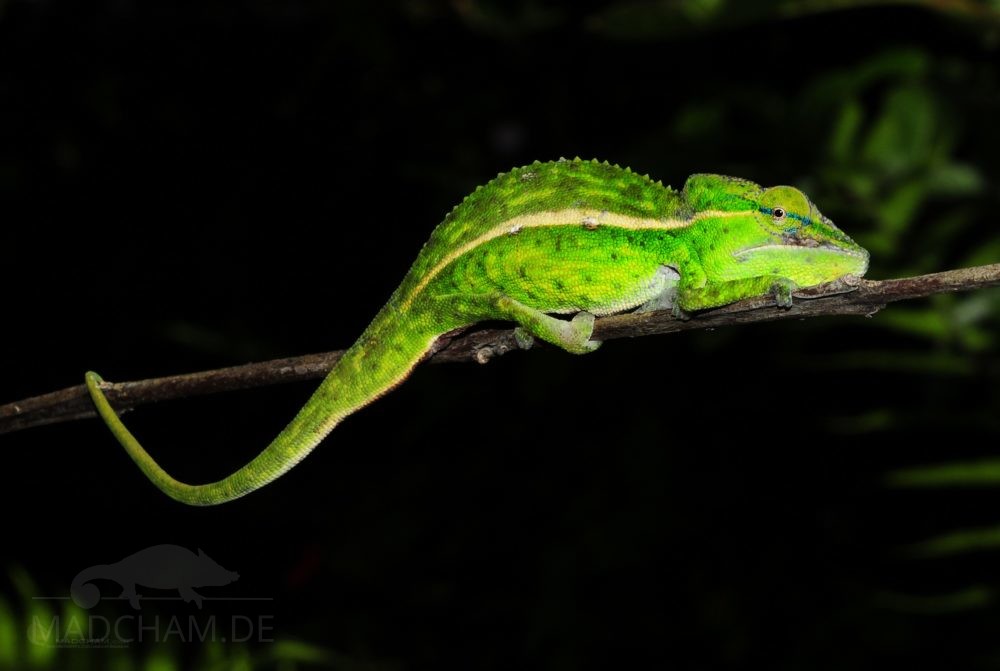 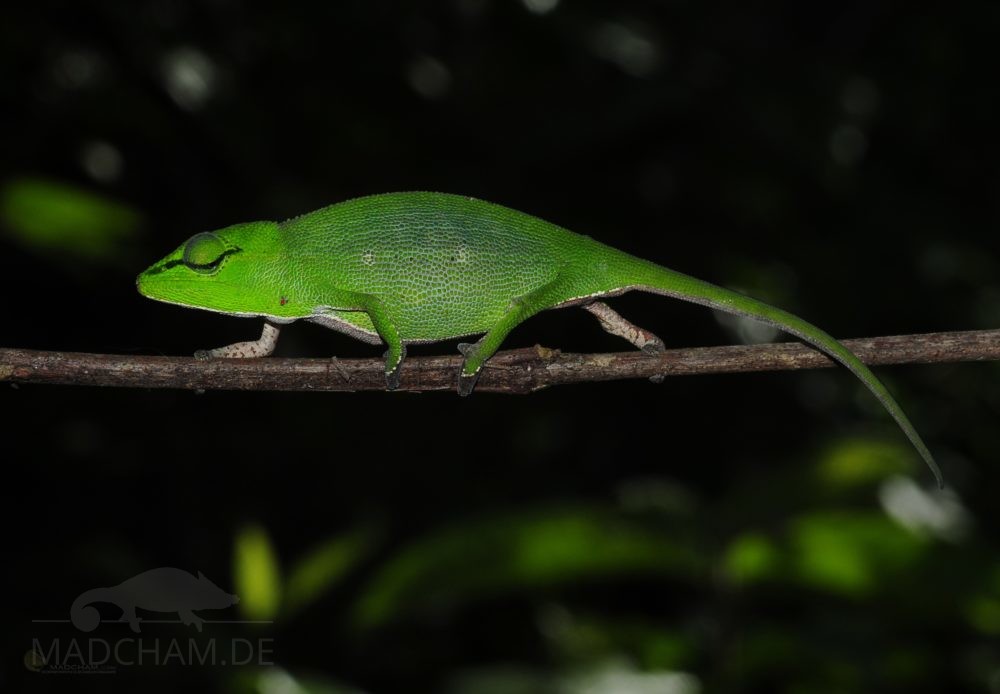 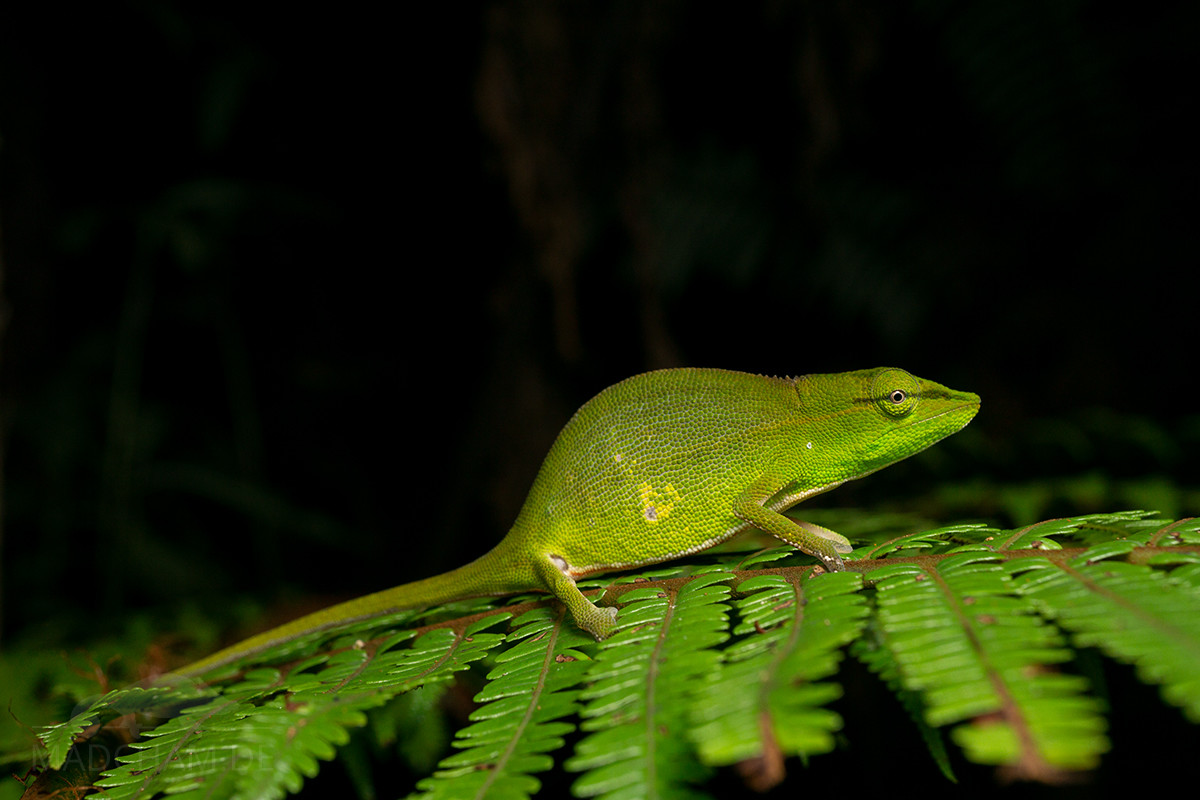 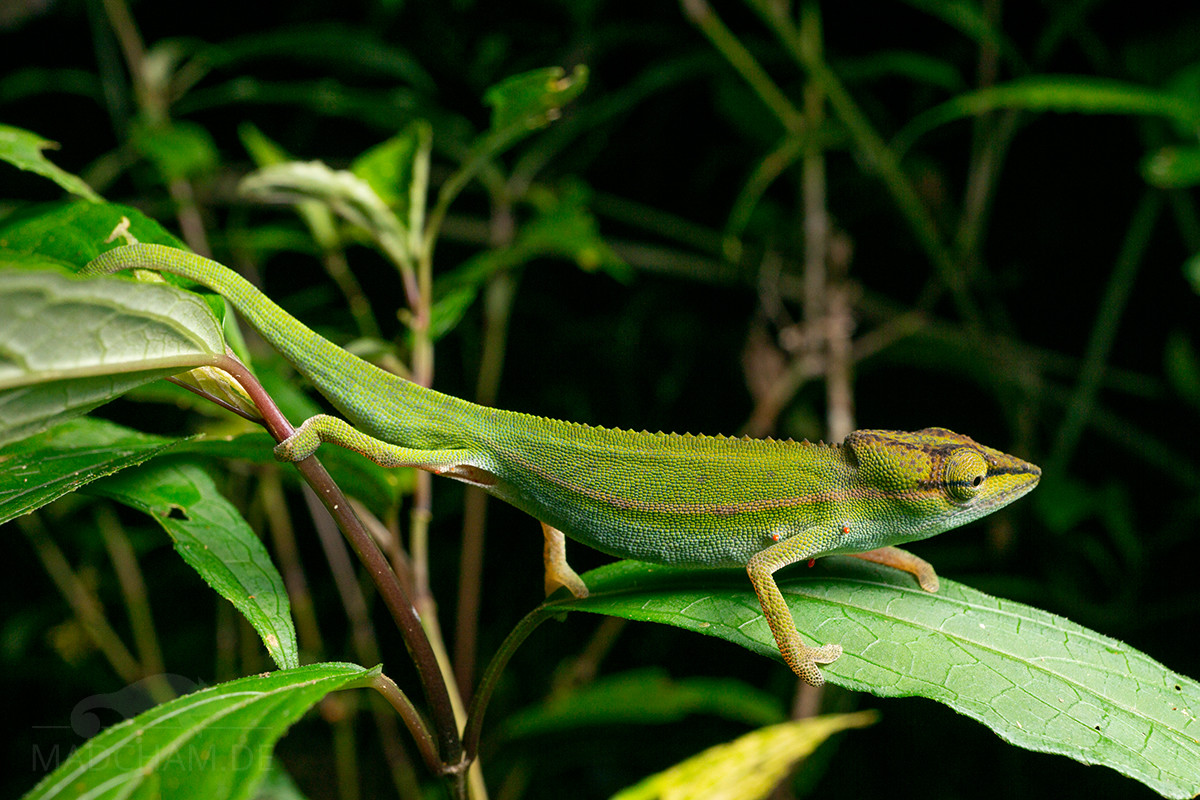 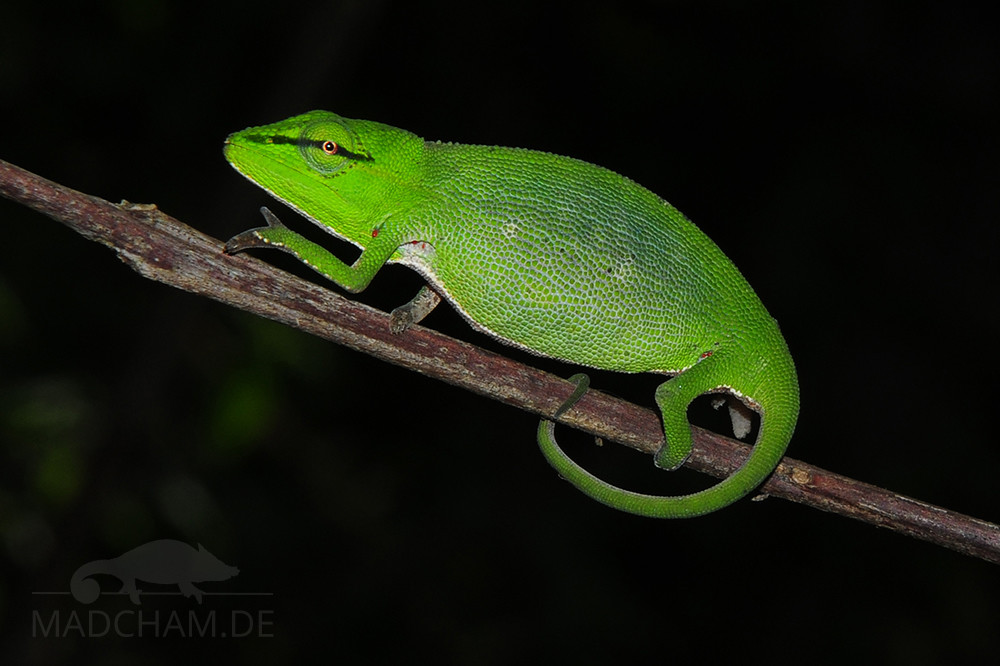 The Belgian zoologist George Alber Boulenger, at that time working at the Natural History Museum in London (Great Britain), probably named this chameleon species after the Latin gastro taenia, which can be translated as “belly band”. This probably refers to the white lateral stripes of the males.

Calumma gastrotaenia belongs to the chameleon species that prefer living in the dense rainforests of the eastern highlands. We could find this chameleon species at elevations of 1200 meters above sea level. Lucky people can find these small chameleons in the rainforests of Analamazaotra in high shrubs as well as along the road to Andasibe at night sleeping on small branches. Over the last years, we have been watching a strong decrease in specimen numbers, and up to date, this species can only rarely be found anymore in Andasibe. The best place to see the animals is Anjozorobe in the northern highlands of Madagascar. In spring you can find whole “kindergartens” of this species in the forest at only a few hundred meters.

Calumma gastrotaenia belongs to the small or mid-sized chameleon species. Males reach a length of 14 cm, while females grow up to 13 cm. Scalation is homogenous, with a small dorsal crest in males. The males’ color is bright green with yellow accents and a white lateral stripe from the eye to the tail that may be bright blue above the eyelids. The casque rises in direction to the back, in females, it stays low. The ventral crest has two parallel running white lines. During mating time, Calumma gastrotaenia sometimes also show blue accents. The young specimens are bright green and really tiny.

Young Calumma gastrotaenia hatch from January to March, they are easier to find because they always sleep at the end of leaves.

The following pictures show the habitat of Calumma gastrotaenia in the rainforests of Andasibe and Anjozorobe. Both rainforests are rather dense with small clearings in between. The animals live on slender trees and in high bushes.

Hereinafter you can find some 360° pictures from Andasibe. You can move inside these pictures via mouse click in all directions. If you click on the Theta logo, a new window with an enlarged view will open. You will also have the opportunity to look at the pictures in full-screen mode. Enjoy!