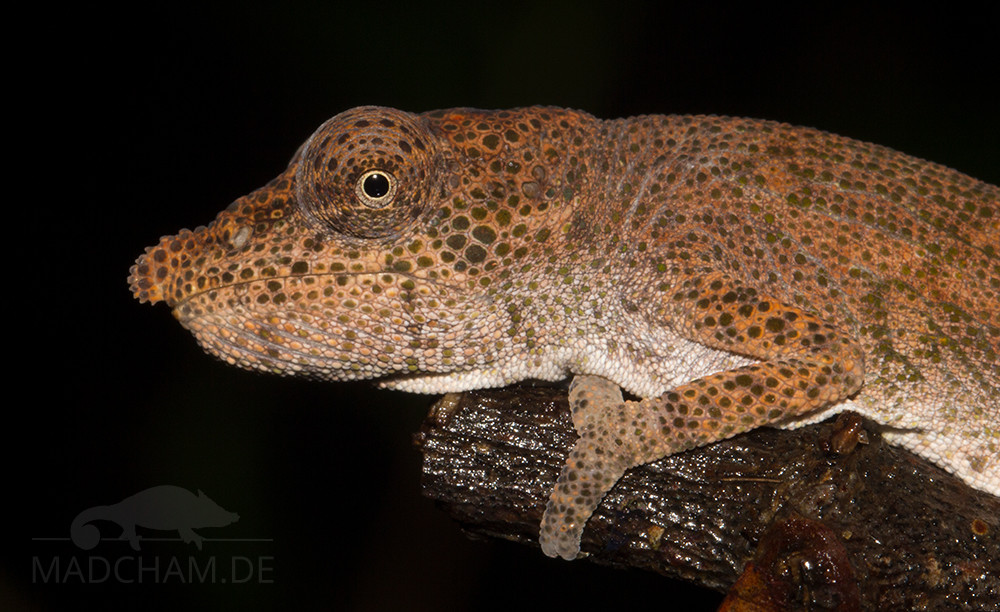 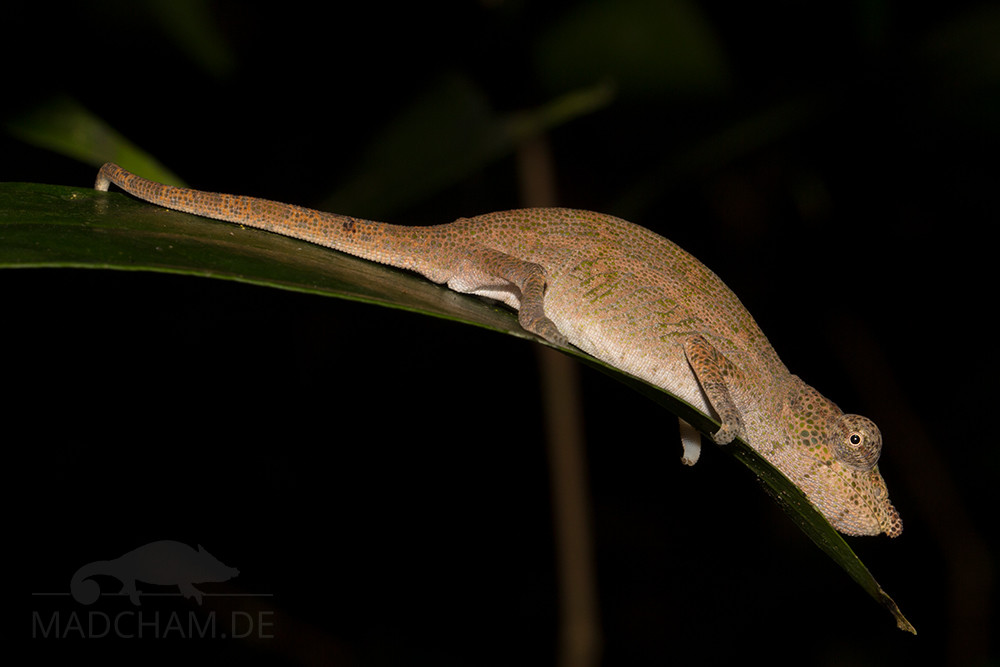 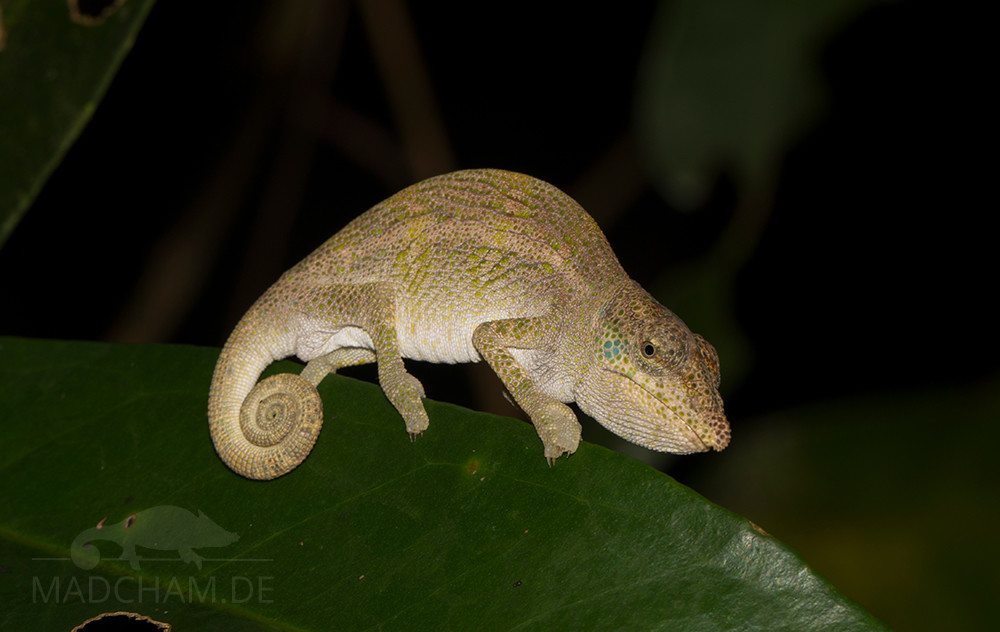 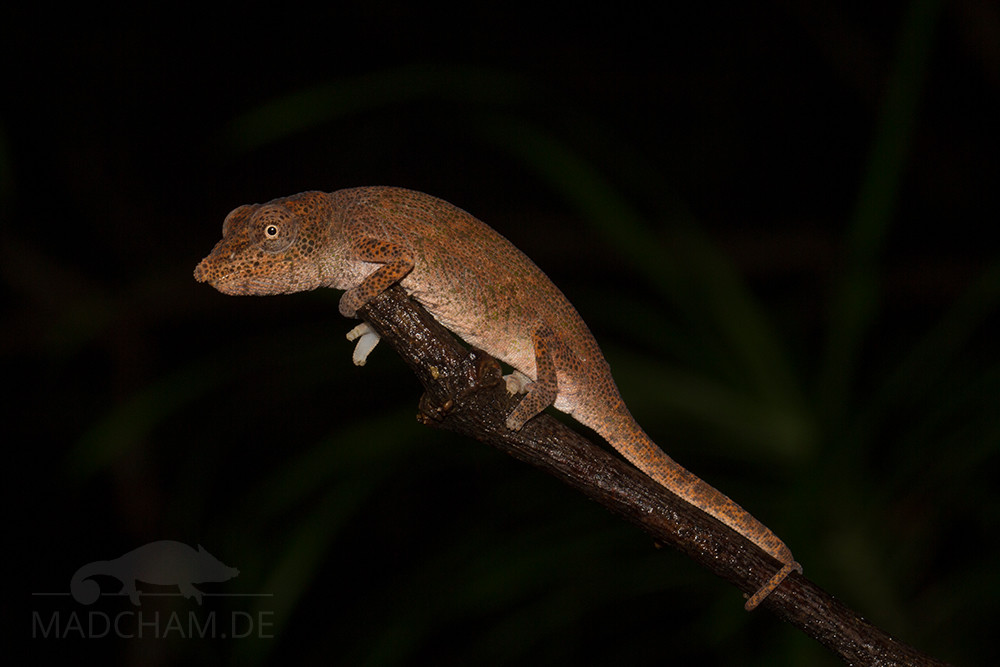 The German biologist Robert Friedrich Wilhelm Mertens, later director of the Senckenberg Research Institute and Natural History Museum in Francfort (Germany), named this chameleon species after the place where it was found, the Col de Pierre Radama, a place north of the Bay of Antongil. Today this place no longer exists in Madagascar. However, it was probably named after King Radama I, one of the most famous kings of the Merina ethnic group. The chameleon that Mertens described came from a Madagascar expedition of the Swiss anatomist Hans Bluntschli in 1931.

Calumma radamanus is only native to the rainforests around the Bay of Antongil in northeast Madagascar. This includes the Masoala National Park with its paradise island of Nosy Mangabe and the nearby forests of Tampolo and Analalava. The nearby Makira massif is also home to Calumma radamanus. From other areas of Madagascar similar-looking chameleon species have been named, but they are genetically different from Calumma radamanus and are therefore considered Calumma cf. radamanus until their final taxonomic classification.

Calumma radamanus belongs to the small chameleons with a total length of 7.7 to 9.3 cm. Both sexes have a round, downward-pointing rostral appendage. The rostral scale directly under the nose is integrated into the rostral appendage in this species. The males of Calumma radamanus wear a small only a little elevated casque (only 0.8-1.5 mm). Some males have a dorsal crest with six to eight spines. The body color of the males is beige with greenish scales, a white lateral stripe and three blue spots on the body side. The nose is often turquoise. The females are often simply beige. Many Calumma radamanus have a dark stripe running from the nose over the eyelids to the helmet.

Until 2020 this species and similar-looking chameleons belonged to Calumma cf. nasutum (cf. = confer = compare; denotes a similar species, but it is already known that it is not exactly the species named after the cf.) Only in 2020 Calumma nasutum was defined more precisely by Prötzel, Scherz et al. and Calumma radamanus was revised. There are still countless, very similar-looking species all over Madagascar, which are considered Calumma cf. radamanus and probably contain several, as yet undefined, chameleon species. Due to years of problems with the lack of genetic differentiation of different species, countless chameleons have been exported under the name Calumma nasutum since 2014. Most of these chameleons belong to Calumma radamanus or Calumma cf. radamanus. Calumma nasutum has a CITES quota for legal export, but Calumma radamanus actually does not. 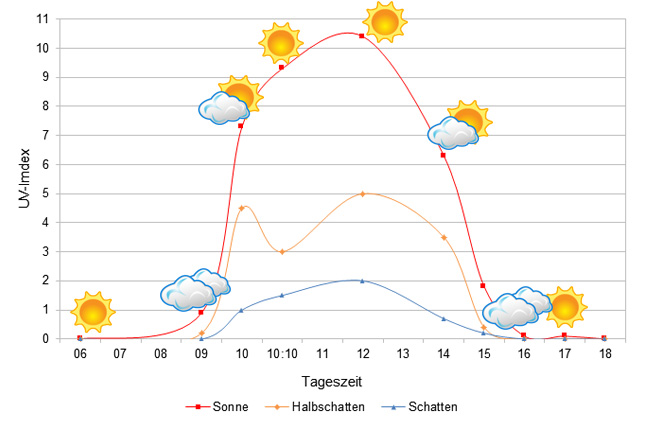 The following photos show parts of the habitat of Calumma radamanus during the rainy season in Masoala and on Nosy Mangabe. In both regions, the intact rainforest still prevails but is bordered by secondary vegetation. Calumma radamanus is mainly found directly in the rainforest, in closed forest areas with a lot of undergrowth. The animals prefer bushes and trees with very thin, narrow branches and many small leaves.