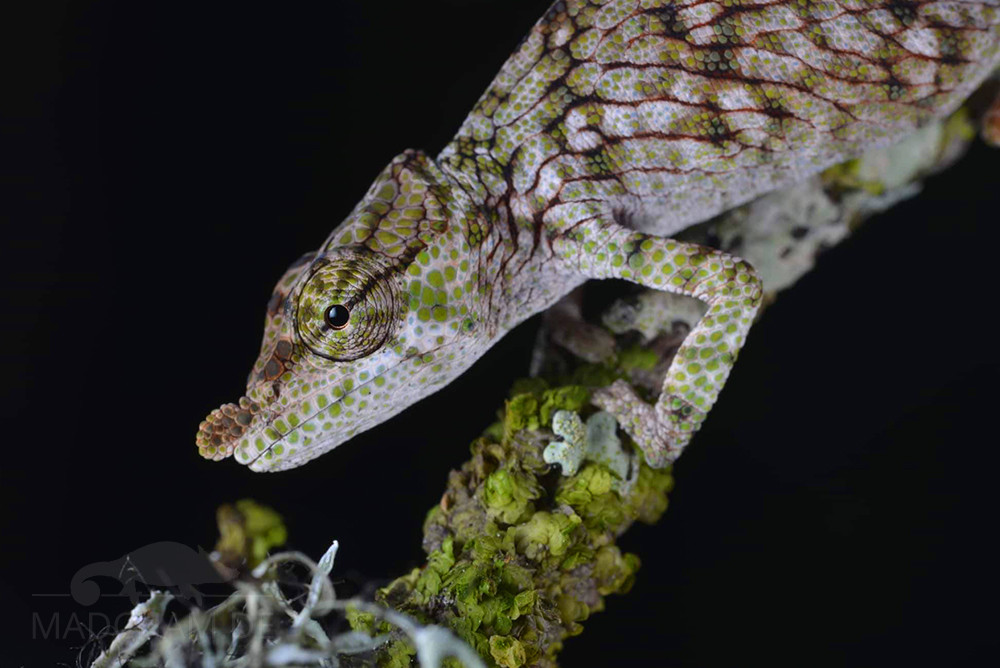 Here we have put together a collection of questions and answers that are asked on our pages regarding species descriptions of chameleons. If further questions should fit here, we would be glad about an e-mail. To jump directly to the questions just click on the corresponding line.

What is taxonomy?
What is the difference between trivial names and scientific names of species?
What does a species name consist of?
Who names a new species and after what?
What means cf. in the species name, e.g. Calumma cf. radamanus?
What does “et al.” after a name mean?
Why are some first descriptors listed in brackets, some not?
What is a candidate species?

Taxonomy is the scientific classification of living beings into an arbitrary system. The Swedish natural scientist Carl von Linné began in 1735 to divide animals into classes, orders, genera and species. This classification still exists today – much extended and much more detailed. The term “species” is not firmly defined. Today it is widely agreed that it is not only animals that can successfully reproduce with each other and are externally (morphologically) similar, but are also phylogenetically very closely related.

What is the difference between trivial names and scientific names of species?

Trivial names are the names for a chameleon, which each country assigns in its own language, e.g. carpet chameleon. Scientific names of species are, in their combination of genus and species name, unchangeable and unambiguously assignable species names, e.g. Furcifer lateralis. 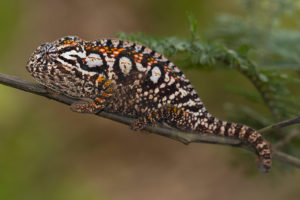 The disadvantage of trivial names is that they are neither international nor unique. This means that the use of trivial names easily leads to confusion between different chameleon species. Furthermore, many chameleons do not have any trivial names at all, they are often simply “derived” from external characteristics or trivial names of other languages and can, therefore, be very different. For example, Calumma gallus is often called “Pinocchio chameleon” in German, but in English it is called “lance-nosed chameleon” or “blade chameleon”. If the scientific name Calumma gallus is used instead, it is immediately clear to everyone what species it is.

What does a species name consist of?

Who names a new species and after what?

Anyone discovering a new species must also describe it in writing a scientific article in a peer-reviewed journal. Peer review means that the article is not simply submitted and promptly published as in a newspaper, but that there is a review process lasting weeks or months after submission. During this process, various other scientists working in the same field read the article and make comments, corrections, or ask questions about the methodology and structure of the publication. A species name is assigned in this descriptive article.

The genus name, the “front part of the species name”, so to speak, is usually already known: If you discover a new Furcifer species, you cannot call it Newspecies newspecies, but need to call it Furcifer newspecies. Only those who discover a completely new genus – which is quite rare nowadays – may also determine the genus name. 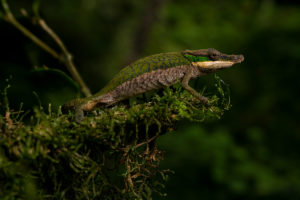 The second part, the actual name of a species, may always be chosen by the describer himself. Frequently, properties of the species are used as the species name, for example Calumma roaloko or Furcifer verrucosus. Other scientists dedicate the species to colleagues, family members, or friends, as in Calumma juliae or Furcifer voeltzkowi. If the species is named after persons, the ending of the species name must be adapted: -ae for female, -i for male and -orum for multiple individuals. It is also common to name the species according to its origin as in Furcifer antimena. Fantasy names and the naming after any model are also allowed. A wasp has been named after the singer Shakira, a dinosaur after Disney’s Bambi, a worm after Yoda from Star Wars and a ray after a vacuum cleaner company. In the meantime, a whole range of different animals has been named after Tolkien’s book and film series “The Lord of the Rings”. Only one is not welcome: You don’t name species after yourself.

In recent years, the project BIOPAT has made it possible for laypeople to name a species. They donate at least 2600 € to the project in the form of sponsorship. The funds will benefit research and the home country of the species, while the person sponsoring the species will be able to choose the species name for a new description of his or her choice.

This is the abbreviation for Latin confer, which means “to compare”. It is used to refer to chameleons that look very similar to the species mentioned, but which probably belong to their own, previously undescribed species. One knows or suspects that the species is undescribed, but no scientific publication exists yet. 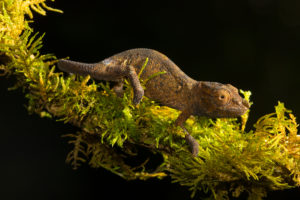 An undescribed species from Amber Mountain, named Calumma cf. radamanus at the moment

For example, there are a number of small chameleons with slightly downward pointing rostral processes and without occipital lobes, which are currently all called Calumma cf. radamanus. It is known from the revised description of the species Calumma radamanus that it only occurs around the bay of Antongil in northeast Madagascar. However, there are similar-looking chameleons in many places in Madagascar, which differ in some small details. In order to name them correctly, you use the “cf.” in the species name. This means that, according to the current state of science, the species would belong to Calumma radamanus, but because of its appearance and the place where it was found, it is assumed that it is a closely related species, but as yet undescribed.

What does “et al.” after a name mean?

The first named author of a publication is the one who wrote the publication and, simply put, did most of the work. All others named afterward are so-called co-authors. They have also contributed a share, for example in laboratory work, in the field as participants of an expedition or in the evaluation of statistics. Nowadays, publications are written with more and more co-authors. If one were to cite these articles, the citation of the source in the middle of the text would waste an incredible amount of space with up to 30 authors and would look inconsistent. That is why authors are often shortened down to the first, second, and third authors. But to point out that not only the first or second author was involved in the publication, the abbreviation “et al.” is used. This is abbreviated for Latin et alii = and others. The complete source with all authors is then mentioned in full in the reference list.

Why are some first descriptors listed in brackets, some not?

Many first descriptions were written down more than a hundred years ago. At that time, many scientific methods that are established today, for example genetic species comparisons or micro computer tomography of skeletons, simply did not exist yet. Therefore, many old descriptions are very simple and are based exclusively on the external characteristics of chameleons. In the course of time, other scientists have “reworked” them and the taxonomy has been adapted to the current status: Species have been placed in other genera, split up, revised, or recognized as synonymous with another species. 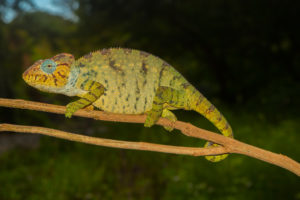 In order to indicate whether someone has described a species according to the latest scientific principles or whether the description was made a long time ago and was originally assigned to another genus, a certain spelling is used:

This spelling means that the species is taxonomically managed today in the same way as it was taxonomically classified by its first descriptor. This applies to many chameleons described in recent years, such as Calumma juliae or Furcifer timoni.

If the first descriptor is in brackets, this means that the species has been sorted into another genus over time. For example, Furcifer oustaleti was first described in 1894 by François Mocquard, but at that time under the name Chamaeleon oustaleti. The description of that time consists of only five sentences, so it was correspondingly inaccurate – but for that time it was quite normal. Among other things, he had no idea at that time that there were many different genera of chameleons and not just one. It took 92 years until Charles Klaver and Wolfgang Boehme assigned the species to the genus Furcifer in 1986 based on the appearance of the hemipenes.

What is a candidate species?

In some publications, the term candidate species appears. This usually means that certain chameleons are already known to researchers and it is suspected that they represent a separate species. However, the evidence for this has not yet been provided or published in a scientific paper. By using the term candidate species, one can already indicate that one has found or genetically proven a new chameleon, even if one has not yet gathered all the data for the redescription itself. This is important, for example, practically in Madagascar when it comes to the designation of protected areas. The higher the number of species in a forest, the higher the chance that the forest will be considered worthy of special protection. Caution: In the USA, the term is used outside of taxonomy. There, candidate species describes an animal or plant species that is planned to be placed under special protection.