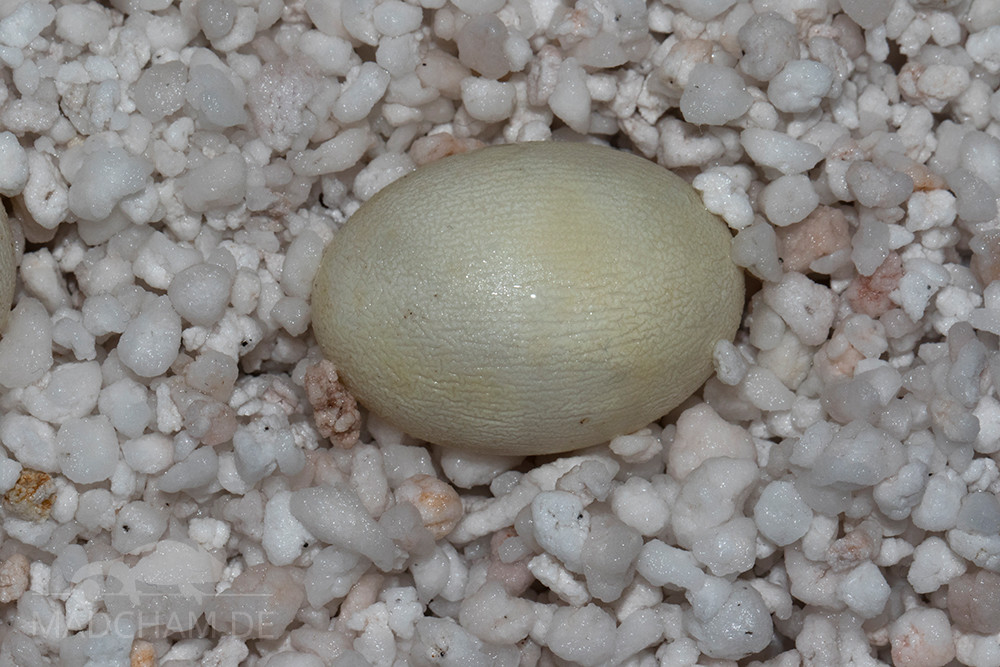 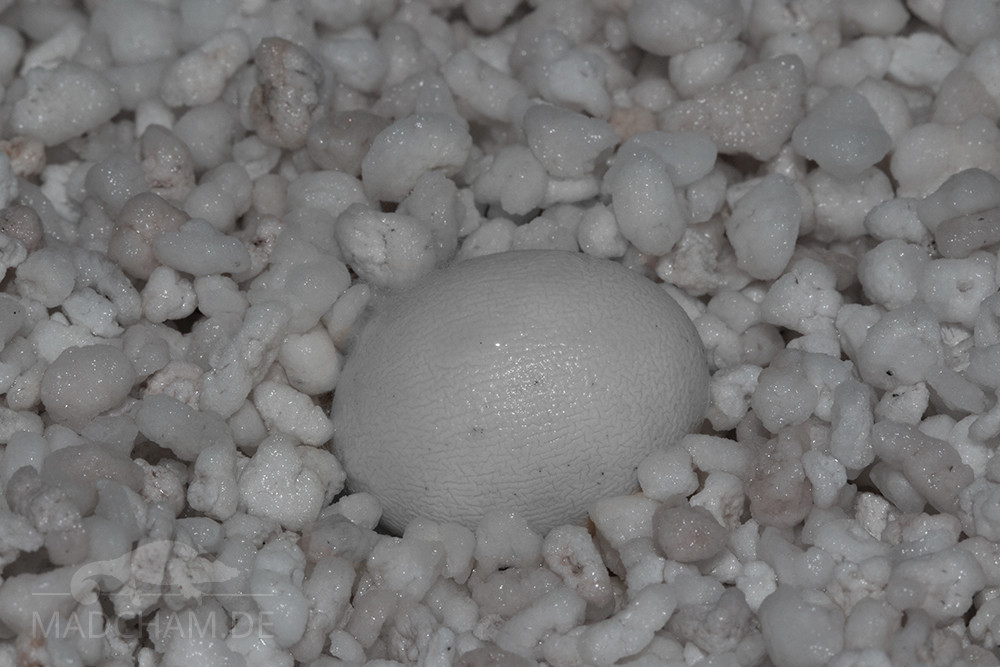 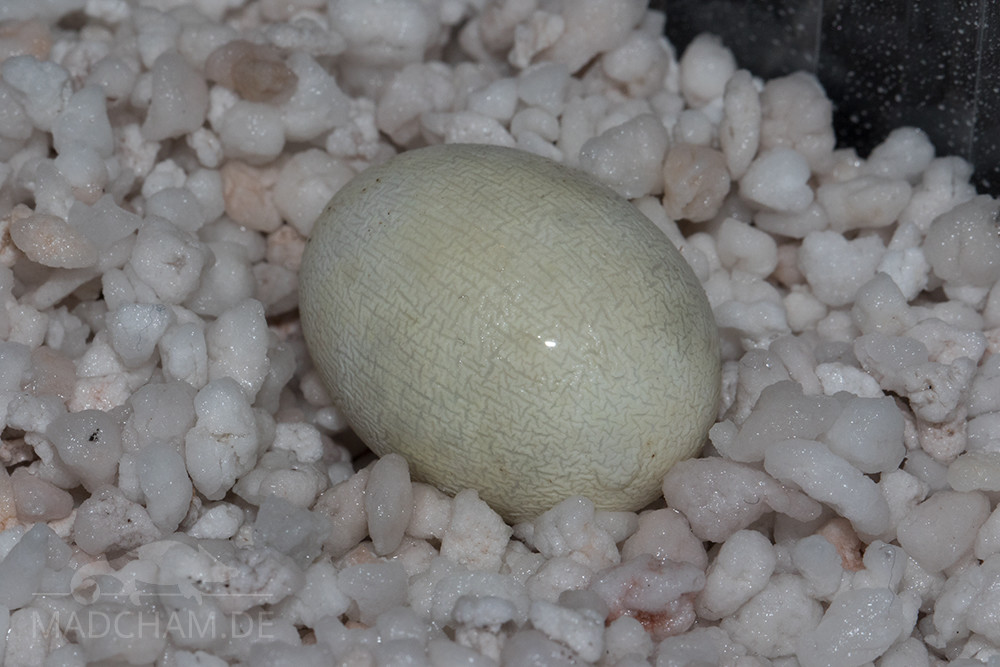 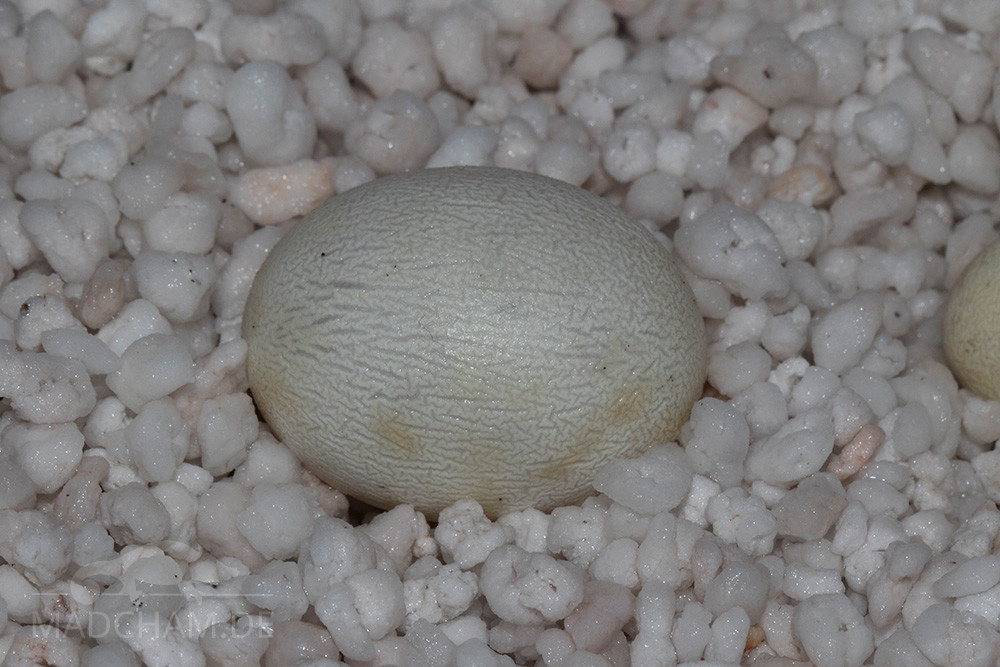 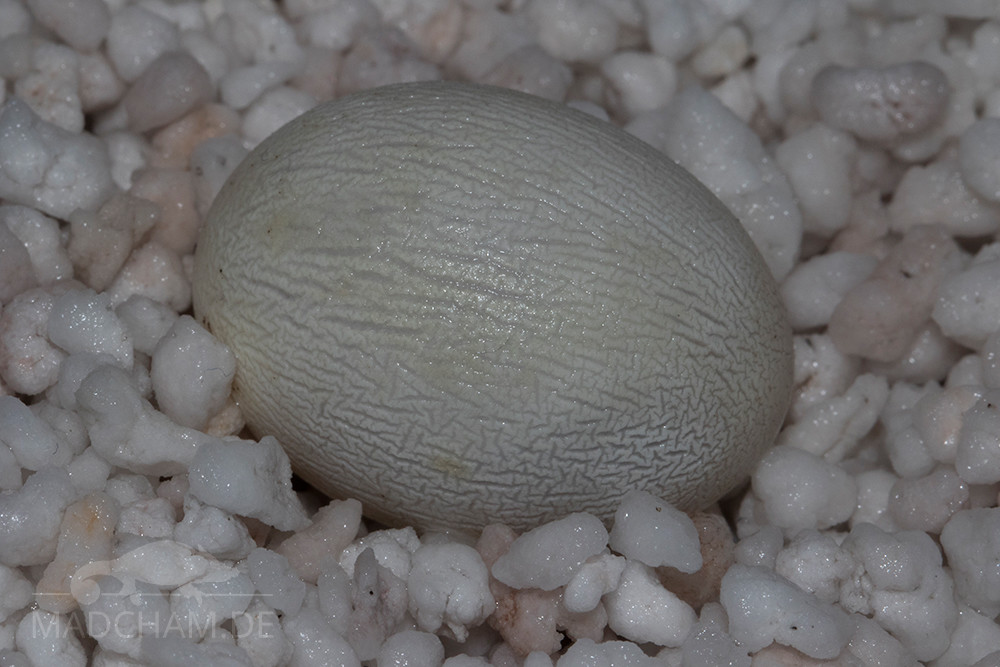 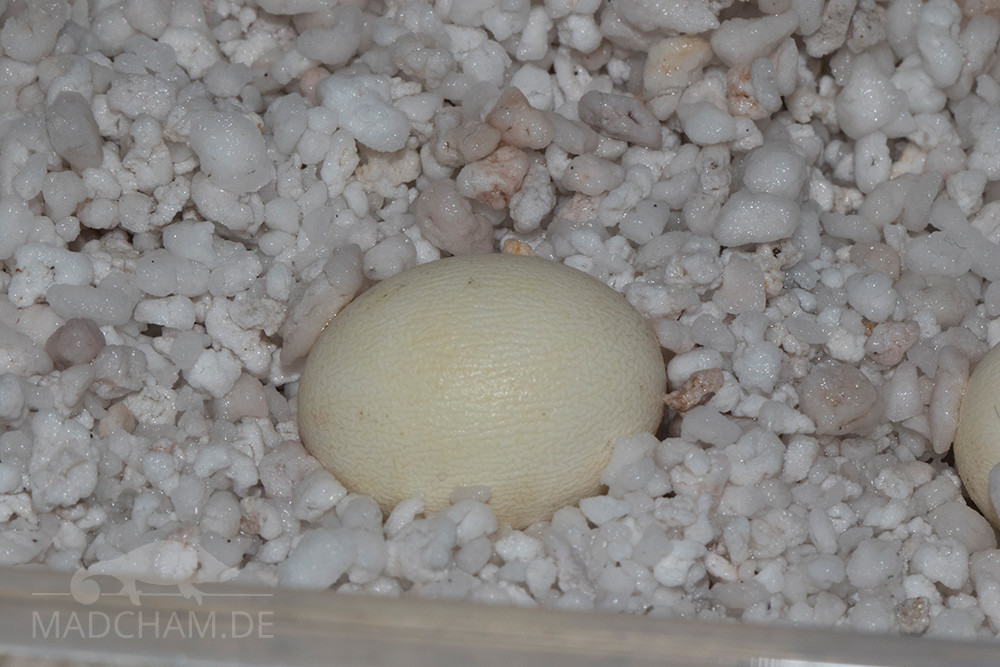 Successful breeding of a chameleon species is the goal of many engaged chameleon keepers. Only those who breeds chameleons can help a species survive and last in captivity. Additionally, captive-bred chameleons decrease the demand for wild-caught specimens. So, when your chameleon female finally laid the longed-for eggs, it is time for incubation. The word incubation comes from Latin incubare which means as much as “brooding something”. In captivity, incubations mean exactly that: Brooding chameleon eggs artificially.

Incubator or brood inside the cage?

Generally, there are two options on how to hatch chameleon eggs. The first is to let the eggs simply inside the terrarium or cage. Some people call this “natural brood” although it has nothing to do with nature, eventually, brood is done inside an artificial terrarium. Disadvantages of this non-controlled incubation inside the cage of the eggs’ parents are elongated incubation times, the early death of embryos due to inappropriate soil temperatures (floor heating, cage location) as well as lack of diapause and partially, weak hatchlings. Furthermore, most chameleons are not picky concerning their food. Most parents would eat their own offspring when hatched in the same terrarium.  Nevertheless, in species with low demands on incubation conditions of eggs, letting the eggs brood inside a terrarium may work sometimes.

For most Malagasy chameleons an incubator is the better choice. You can adjust the temperature exactly, control humidity and substrate and sort out unfertilized eggs. There are incubators especially made for reptiles, but you can also convert models for poultry, fruit flies, or bacteria culture mediums. Before buying an incubator, it is important to know what the incubator should be able to do for the respective chameleon species. Cheaper incubators, for example, can often heat but not cool. This is sufficient for some common species. If you want to incubate chameleon eggs that need a cooler phase, you usually have to dig a little deeper into your wallet. Also, night setback, battery operation in case of power failure, and alarm in case of too strong temperature deviation are possible, but not built-in with every incubator.  A few of the models we have used over the years are presented below:

Digging out the eggs and care

Always dig out chameleon eggs right after the female has finished her works and immediately place them inside an incubator. Please be careful not to turn the eggs. Chameleon eggs do not change position after being laid until they hatch. Some hours after oviposition, adhesions between embryo and egg membranes may develop – the heavy yolk sinks down while the developing embryo swims on top. During the first third of incubation, turning the eggs may lead to the heavy yolk weighing on the tiny embryo or the allantois rupturing. Both lead to malformation or death of the embryo. In fact, there are many chameleon eggs that are not as sensitive. But just to be safe, turning chameleon eggs during incubation should be avoided. You can choose to mark the upper side of the eggs with a soft lead pencil one day after oviposition.

Carefully clean very dirty eggs. Place each egg in a hollow inside substrate you made with your finger. Always let some space between the eggs so you can remove unfertilized eggs without moving the other eggs later on. The substrate should cover approximately half or two-thirds of the eggs. This makes it easier for the eggs to absorb moisture from the environment. Surprisingly, incubation completely without any substrate works well in robust species, too.

Control eggs and substrate inside the incubator every few days. Do not tilt the boxes or let them fall down. When the substrate is too dry, add some milliliters of lukewarm water. Remove condensation water on top of the box’ cover gently with kitchen paper

Finding the right substrate and boxes 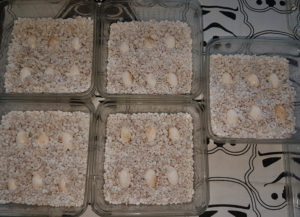 Generally, it makes sense to incubate eggs in closed boxes with a transparent lid. So even a young that hatches too early does not get lost inside your incubator. It is not decisively whether to use cricket boxes, larger plastic boxes, or even Tupperware for incubation. No matter which box you choose, always allow ventilation through some small holes. A usual and often used variation to incubate chameleon eggs are plastic cricket boxes. 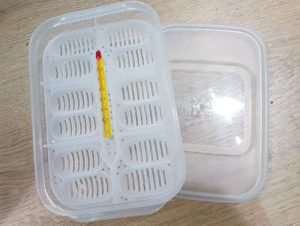 As a substrate, you put the eggs in, for chameleon Vermiculite and Perlite are a good choice. Vermiculite is a silicate that is able to store humidity very well. Perlite is a volcanic stone with similar characteristics. Some chameleon keepers use a mixture of both. For some years, there have been open systems, where the eggs are placed on a simple plastic frame. Below the eggs, you have water or a humid substrate without contact with the eggs. This method is working for common chameleon species such as Furcifer pardalis or Furcifer lateralis, too.

If you want to work very precisely, weigh the boxes with the substrate on a regular base and fill up evaporated water. Please consider that the eggs become heavier during incubation, so the boxes should be a little heavier in the late stages of incubation.

Incubation length varies from species to species and depends on soil temperature. The longest incubation is known from Parson’s chameleons with an average of one and a half years from oviposition until hatching. We are currently working to get as many ground temperatures of different locations in Madagascar as possible in order to get natural incubation temperatures for the various Malagasy chameleon species. An overview of incubation conditions sorted by species can be found here.

A diapause in chameleons is a cooler phase during incubation. Egg development almost stagnates during diapause. In Madagascar, this cool phase takes place in the dry season between April and October. It bypasses the time until the rainy season that begins around October. In the rainy season, the hatching juveniles expect much better conditions to grow. Diapause also makes a better hatch synchronization: That means that as much as possible juveniles of one clutch hatch at the same time.

In most chameleon species, you can quickly recognize whether eggs have been fertilized or not. Unfertilized eggs have a yellowish shell (in contrast to bright white shells of fertilized eggs) and do not grow constantly. Later on, unfertilized eggs often begin to get moldy. You can also light through the eggs as it is done with poultry eggs. In the fertile eggs, you will see fine blood vessels and the embryo as a dark disc. The only problem with this method is that you have to move the eggs at a very inconvenient point in time, and thus you may turn the eggs accidentally. A third but rarely used method is measuring the pulse of the embryos with a digital egg monitor used in birds. But there are little data known from chameleons. Probably the high price of about 344 € per monitor prevents most chameleon keepers from controlling their eggs this way. 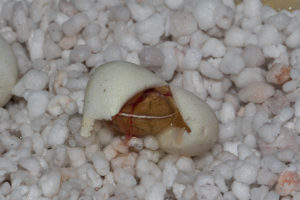 This egg burst short before hatching time because it was too wet incubated. The almost ready-to-hatch embryo did not survive.

During incubation, it may happen that fertile eggs suddenly collapse and get moldy. This usually means that the embryo inside the egg has died off. Reasons are various and should be investigated especially when several embryos die off in the same clutch.

A common reason for dead embryos is wrong temperatures (too high, too low) or unintentional temperature fluctuations after a blackout or a very hot summer day. Accidentally dropped down eggs also tend to die off. But also too dry substrate, lack of air exchange during incubation or nutritional deficiencies in the parents’ food may be reasons for dead embryos. Too wet incubated eggs may build such a high pressure inside the egg that it will burst before hatching. Malformed juveniles are also often caused by incubation failures

Contrarily, if everything works well during incubation, after months of waiting you will experience the eggs hatching.