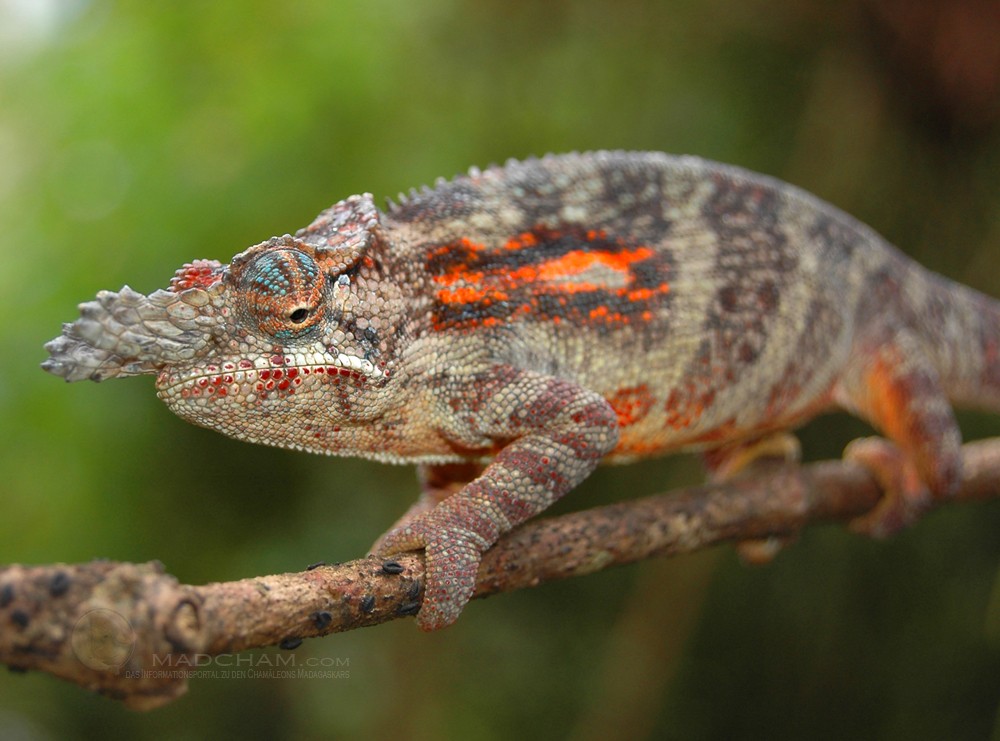 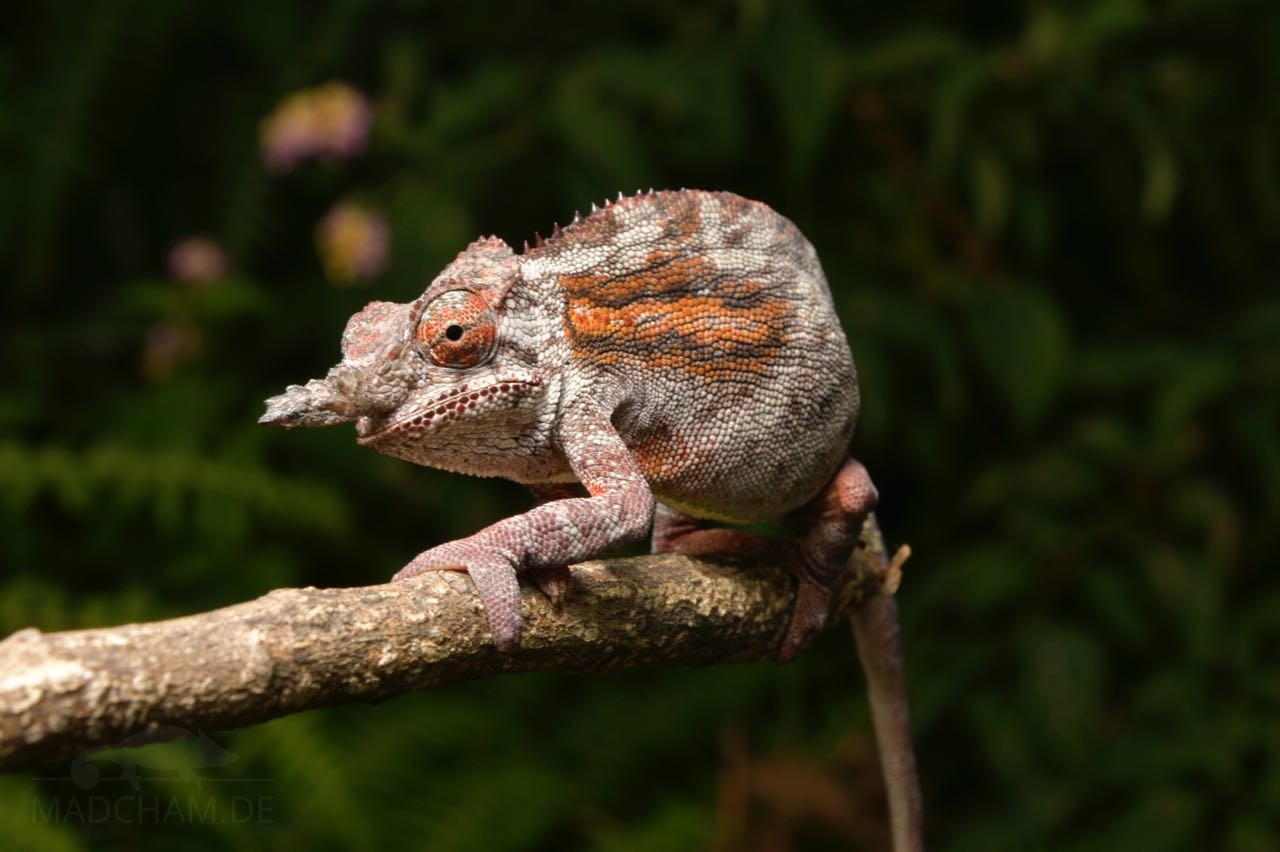 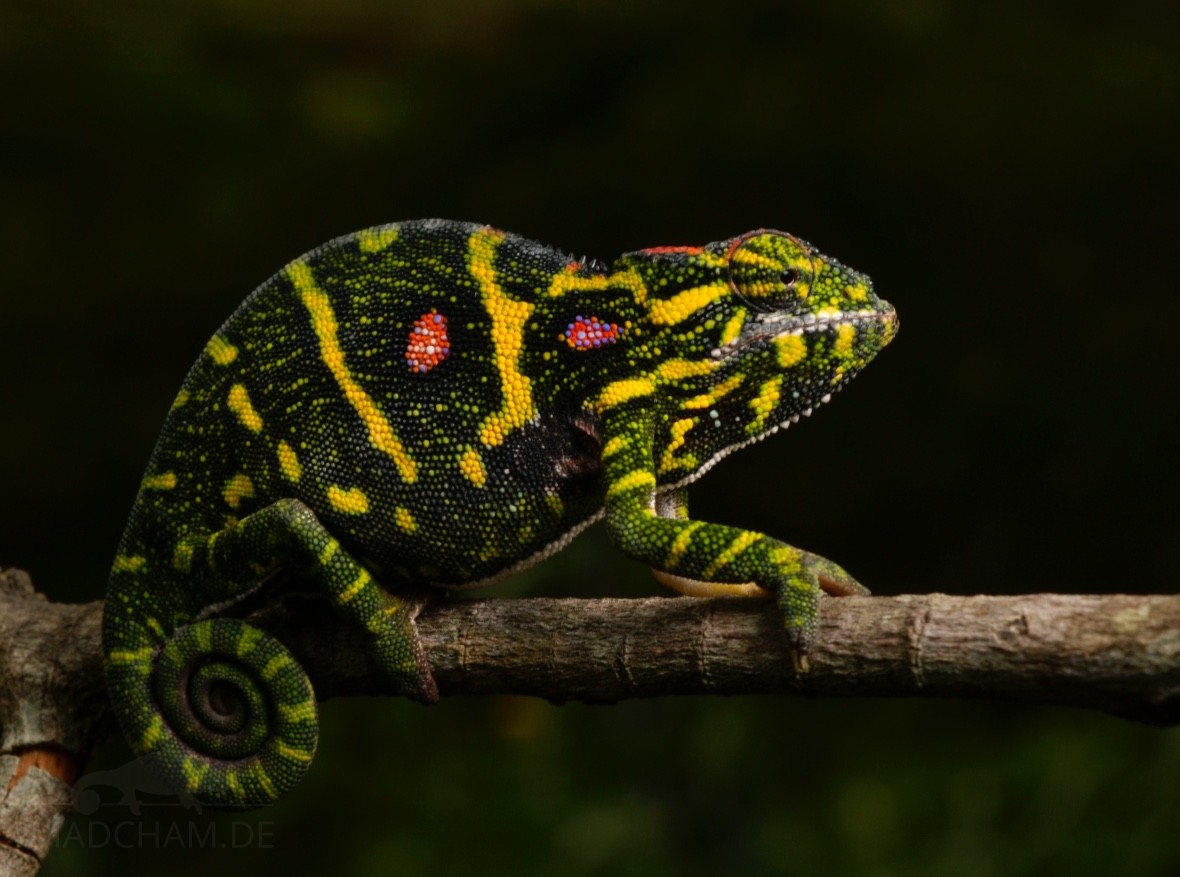 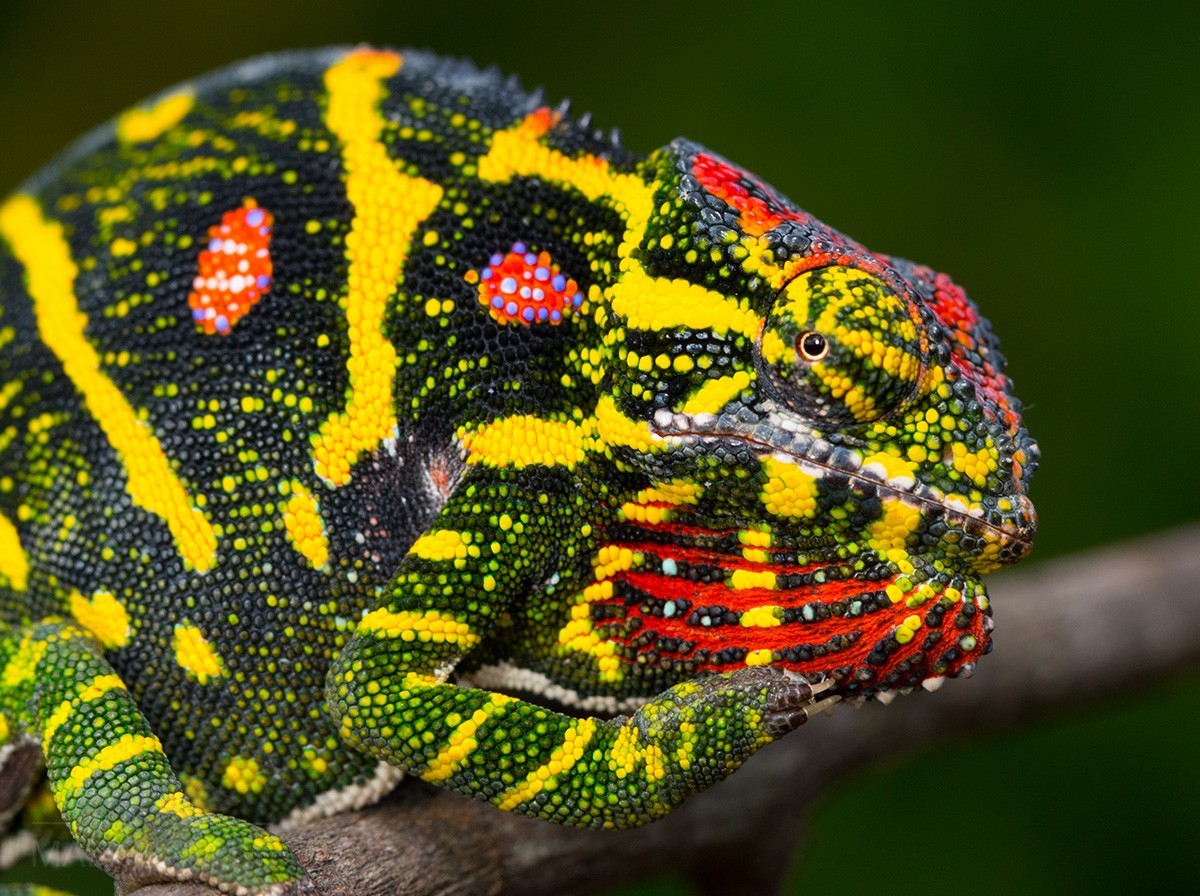 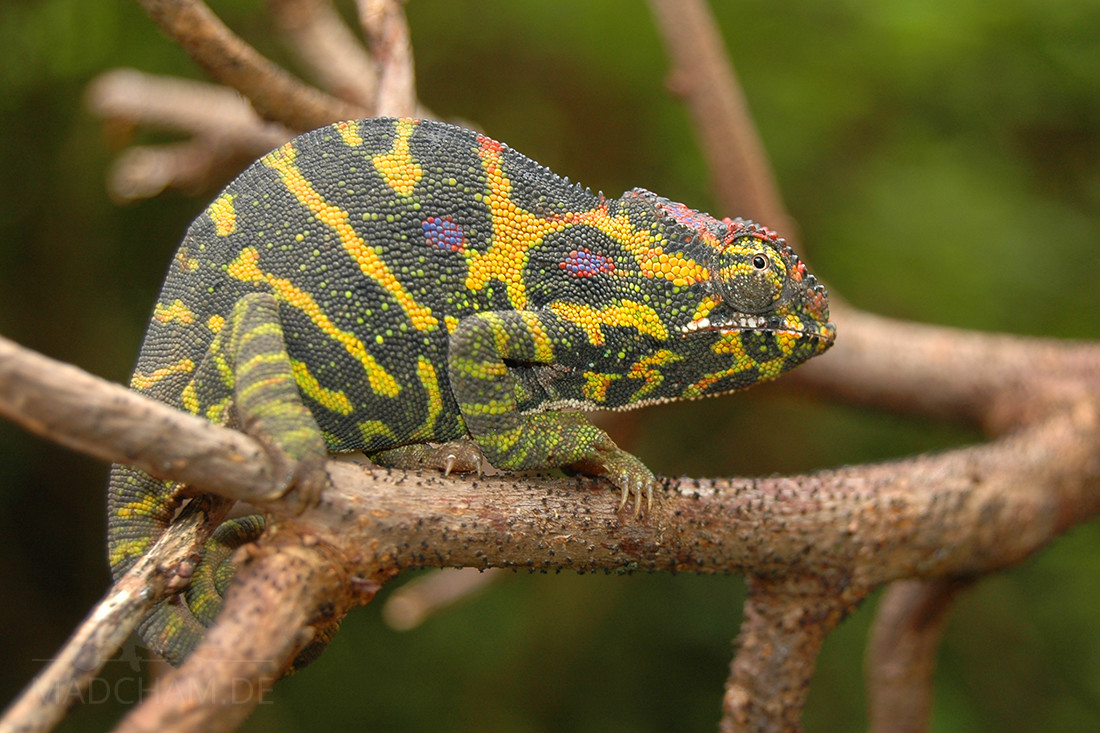 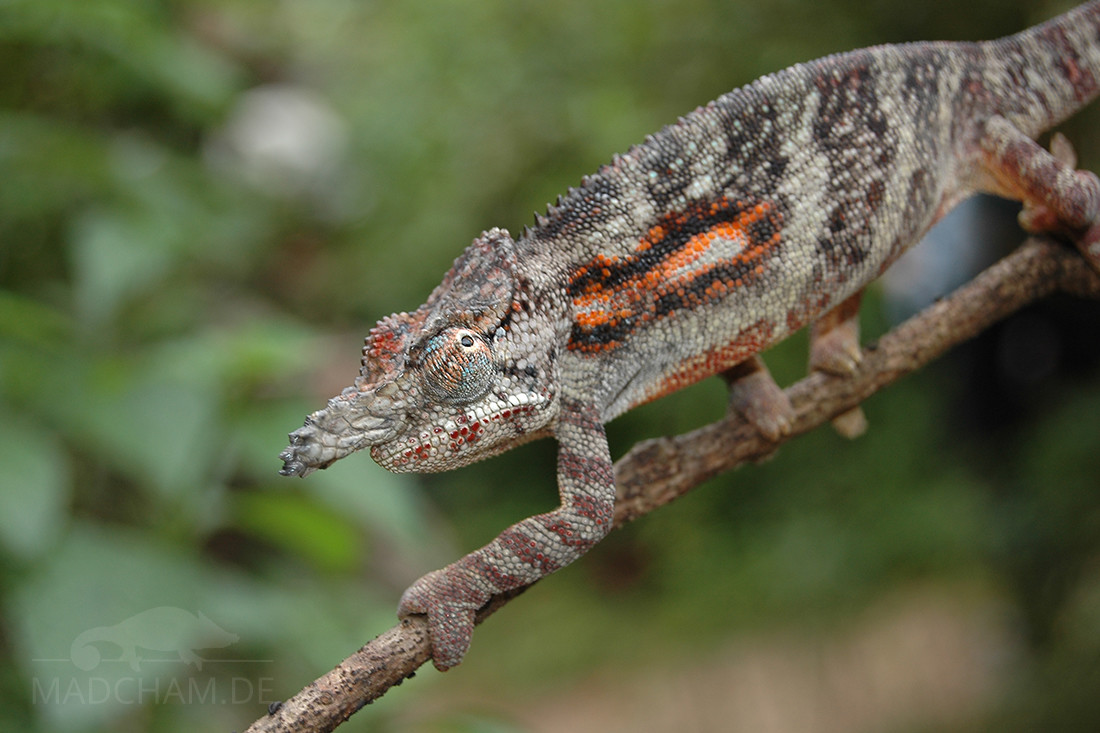 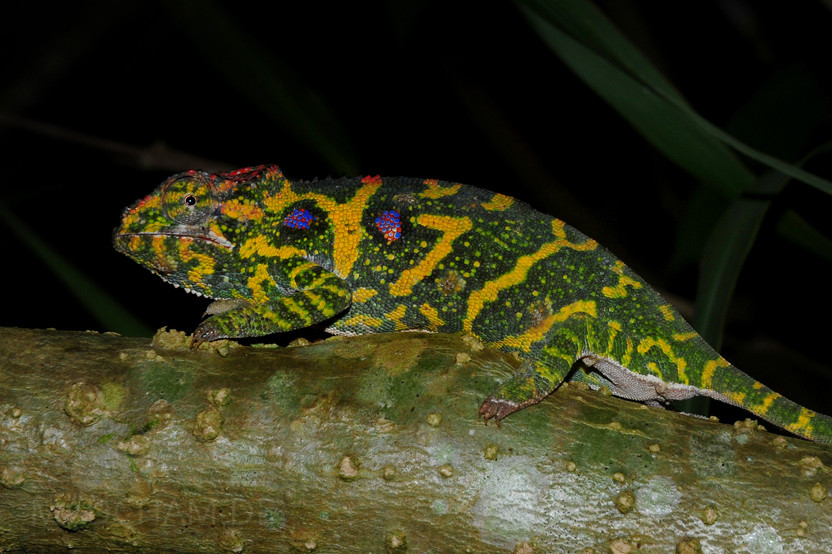 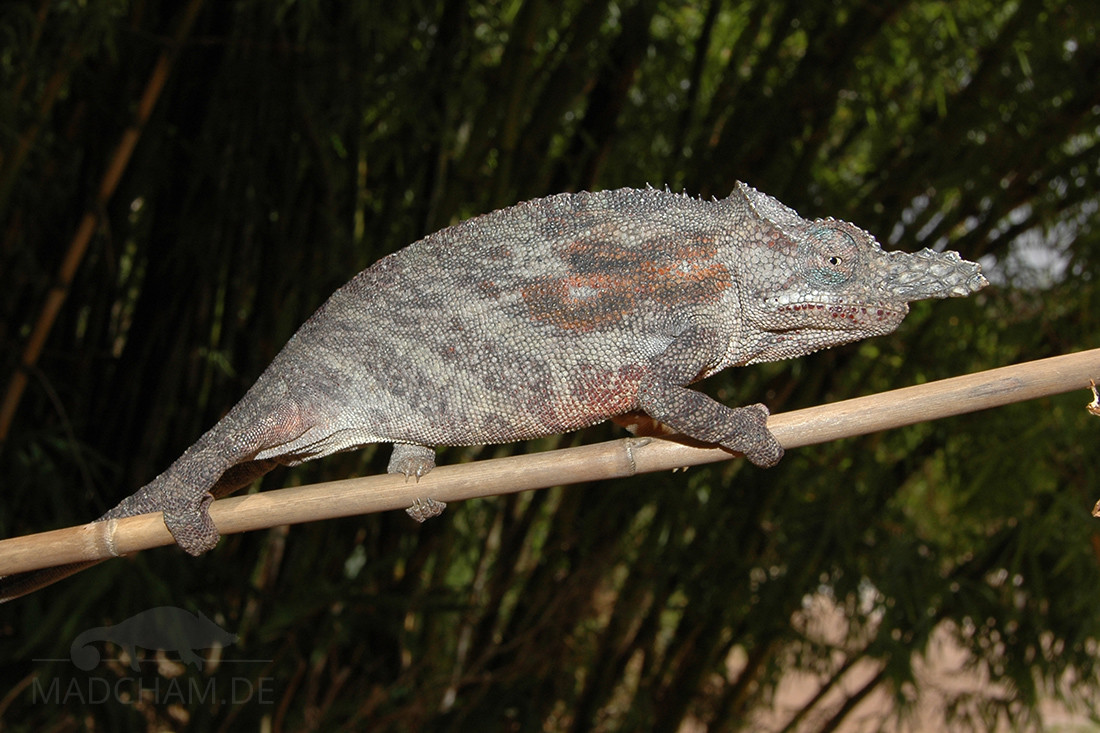 The German zoologist Albert Carl Ludwig Gotthilf Günther, then director of the Zoological Department of the Natural History Museum of London (Great Britain), received a small collection of chameleons in the 1870s. They came from the British missionary George Andrew Shaw from Fianarantsoa. Günther described three chameleons of the collection as a new species. He considered them to be very close relatives of Furcifer bifidus, but thought the species was much smaller. Therefore he gave the new species the Latin name minor, in English “small”.

This chameleon species inhabits the cooler areas of the central highlands. It settles the region from Ambositra to Ivato and Itremo which is approximately 230 km south of the capital Antananarivo. We have found these animals in papaya plantings and in the sparse residues of primary forest. They are by far not as adapted to secondary vegetation as for example Furcifer lateralis. Overall, these animals are difficult to see and a rare finding.

This very attractively colored chameleon species belongs to the middle-sized chameleons and reaches sizes of 16 cm in females and up to 23 cm total length in males. Males have two noticeable nose appendages with serrated ridges and a beige-grey or brown coloration with three diagonal bright stripes at the posterior part of the body. Females are much more colorful with a green color pattern and violet spots. During gravidity, females become even more lovely colored and often show their stress coloration: Yellow stripes on almost black (dark green) background with violet spots on the flanks and red dots on the head. Both genders may have an indistinct parietal, lateral and temporal crest. The dorsal crest is only visible in the anterior part of the body with single spines. Between arms and flanks, these chameleons have two spots surrounded by black. In stressed females, those glow blueish-red. The ventral crest is few developed but has a uniformly white color.

These chameleons lay 10 to 15 eggs which survive a temperature drop to 15 °C and lower during incubation. After 190 to 230 days, the small chameleon babies hatch. In captivity, this species is bred from time to time.

Ambositra is located in Madagascar's central highlands at heights of about 860 meters above sea level. Accordingly, the climate here is much cooler than climate on the coast or in the south of the island. Ambositra is said to be one of the coldest cities in Madagascar.

During the rainy season, this region reaches the highest temperatures around 25°C, sunny places may sometimes even almost reach 30°C for short. In the night, the temperature drops down to 15°C. It is raining almost every day. It's not before the dry season starts in April that precipitation declines a little. But it will not become completely "dry" here - even during the dry season, it is raining at least every second day. The dry season has even colder nights with drops to 10°C and less in some single nights. During the daytime, Ambositra only sometimes reaches 20° and more in the dry season. Unfortunately, we have not ground temperatures for Ambositra available yet.

Furcifer minor lives very hidden in secondary vegetation. You can find them sometimes in coffee plantations around Itremo. The trees are rather small to simplify harvest and overgrown with vines. The ground is covered by foliage and many knee-high plants surround the trees. Another habitat close to Ambositra is the residues of dry forests in a savanna-like landscape. Furcifer minor prefers gnarled, middle-sized trees here. We’ve never seen them in the grass of open areas.