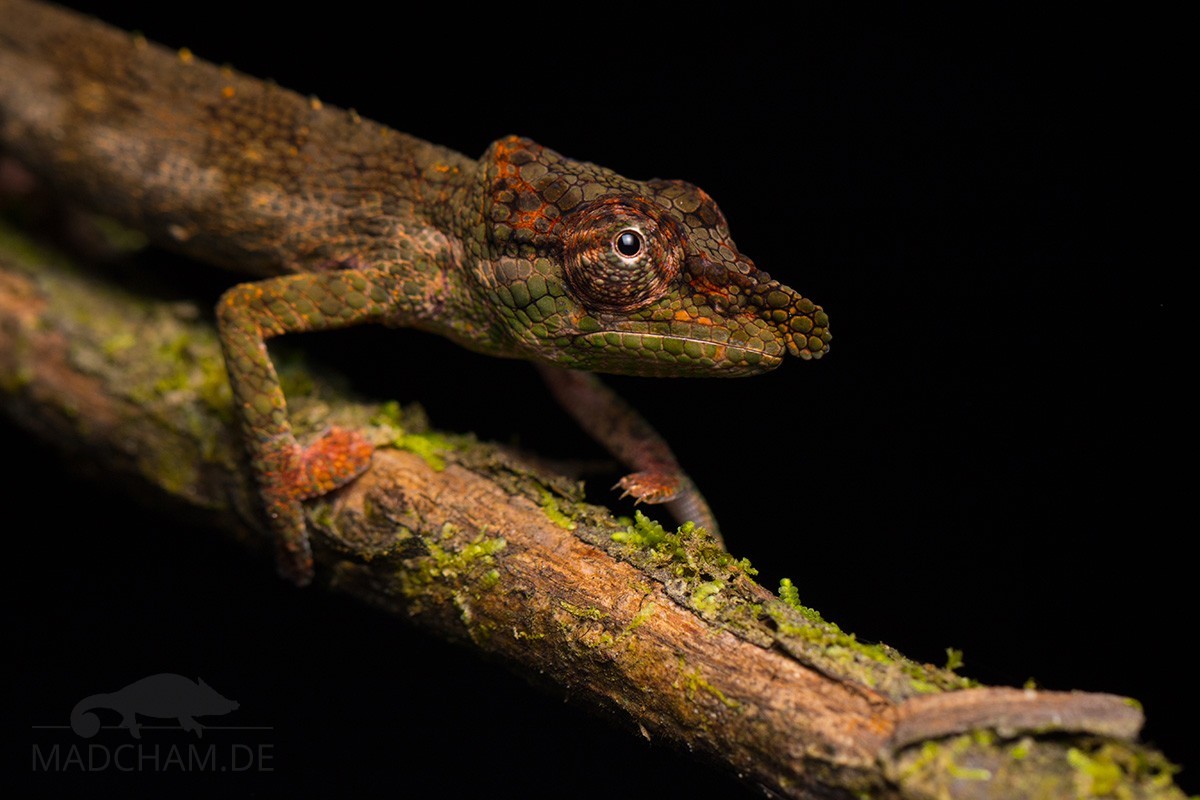 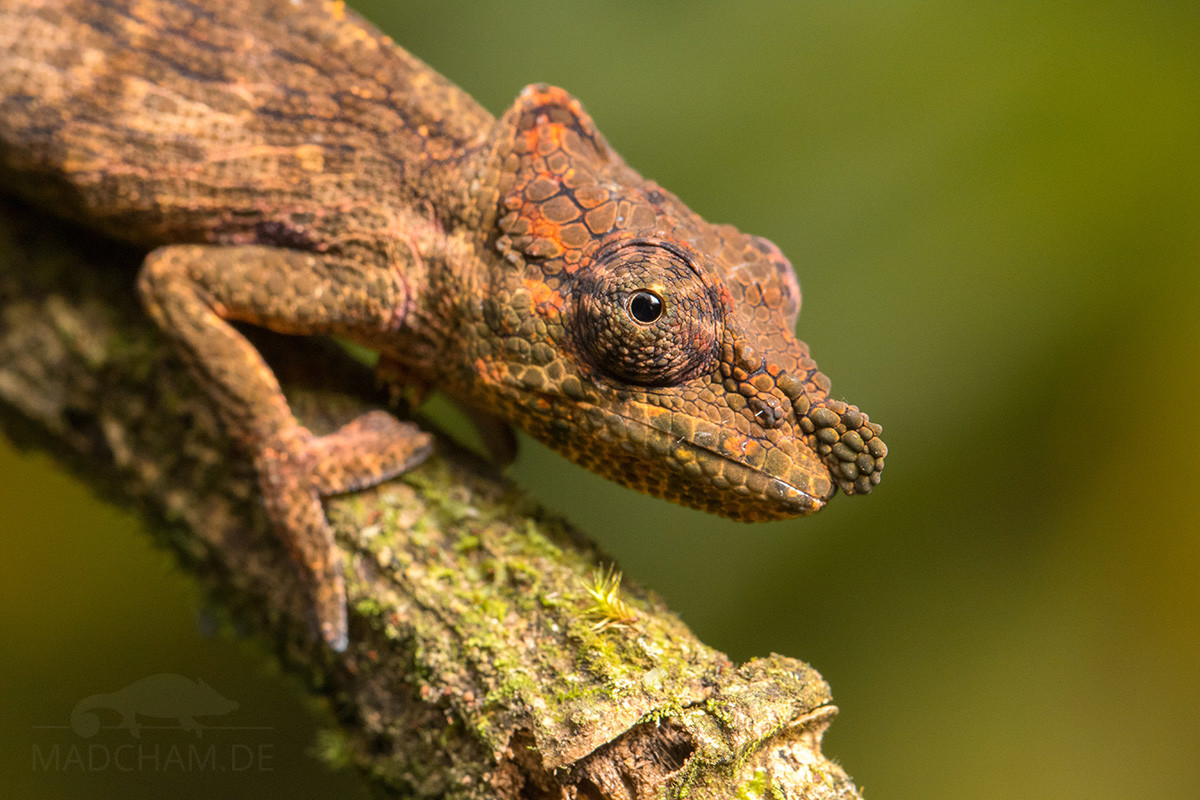 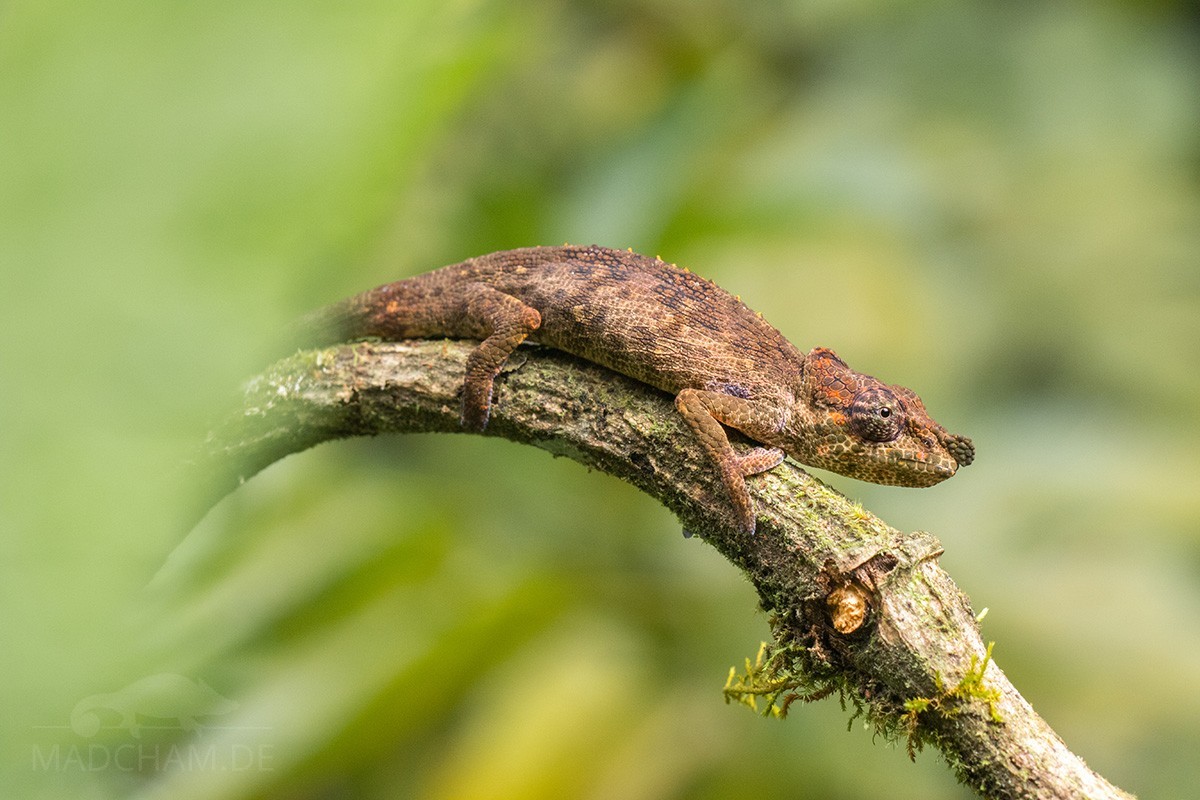 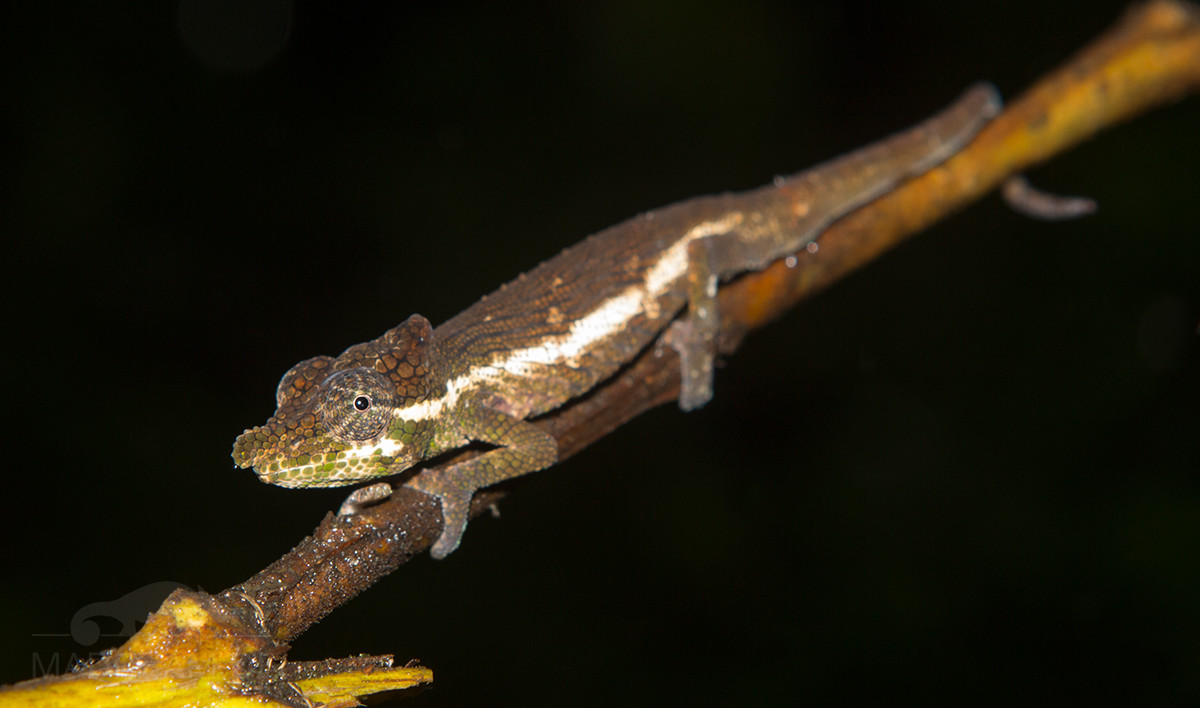 The zoologist François Mocquard of the Natural History Museum in Paris (France) borrowed the species name from the Latin fallax, which means “deceptive” or “misleading”. With this, he pointed out the strong similarities to the species Calumma nasutum. In doing so, he was surprisingly foresighted: it was not until 120 years later, in 2020, that Calumma fallax, like Calumma nasutum, was revised and described more precisely. Until then, for years there had been complete uncertainty about the species of “small chameleons with a nose” in Madagascar.

Calumma fallax occurs from the rainforests of the central highlands down to Andohahela. The best place to find it is the Ranomafana National Park in the southern highlands – that’s where we took our photos. In Anjozorobe north of Antananarivo and Mandraka east of the capital, we have not yet found the species, although it does occur there. According to field surveys conducted in 2018, the species is relatively common in Namoly in Andringitra National Park at elevations ranging from 1490 to 1670 m asl.

Calumma fallax belongs to the smaller chameleons with a maximum total length of 10.1 cm in males and a little less in females. Both sexes do not have any occipital lobes but have a small, soft, round nose appendage, which seems to point a little downwards. Below the rostral appendage, there is a scale of the upper lip, which is clearly separated from the appendage itself. The rostral crest is very pronounced. The males of Calumma fallax show a dorsal crest, which however consists of only six to eleven enlarged scales. The casque of the males is characteristically high (1.3 to 2.5 mm) and tapering. Females neither wear enlarged scales on the back crest nor a particularly conspicuous casque. The scales of both sexes are slightly larger on the arms and legs than on the body. A light lateral stripe is conspicuous, in relaxed state three blue broad stripes appear on the body. The males usually wear reddish colors on helmet and nose, but green on the underside of the head and on the arms. Calumma fallax can be easily distinguished from the similar-sized Calumma radamanus by the higher casque and the shape of the nose. The 2020 revised species Calumma nasutum looks very similar to Calumma fallax, but is found in other places.

The following photos show parts of the Calumma fallax habitat during the rainy season in Ranomafana. The rainforest of Ranomafana is constantly humid, and Calumma fallax is usually found in very dense bushes with an infinite number of thin branches and branches. However, we have already discovered them in similar secondary vegetation on the edge of the rainforest. Ranomafana is crossed by a large river and many small streams, which is why the soil is moist everywhere and mosses and ferns grow almost everywhere.

Below you will find some 360° pictures from Ranomafana taken during the rainy season. With the mouse, you can rotate in all directions. If you click on the Theta logo, the pictures open in an enlarged view in a separate window. There is also the possibility to execute the images in full-screen mode. Have fun watching it!