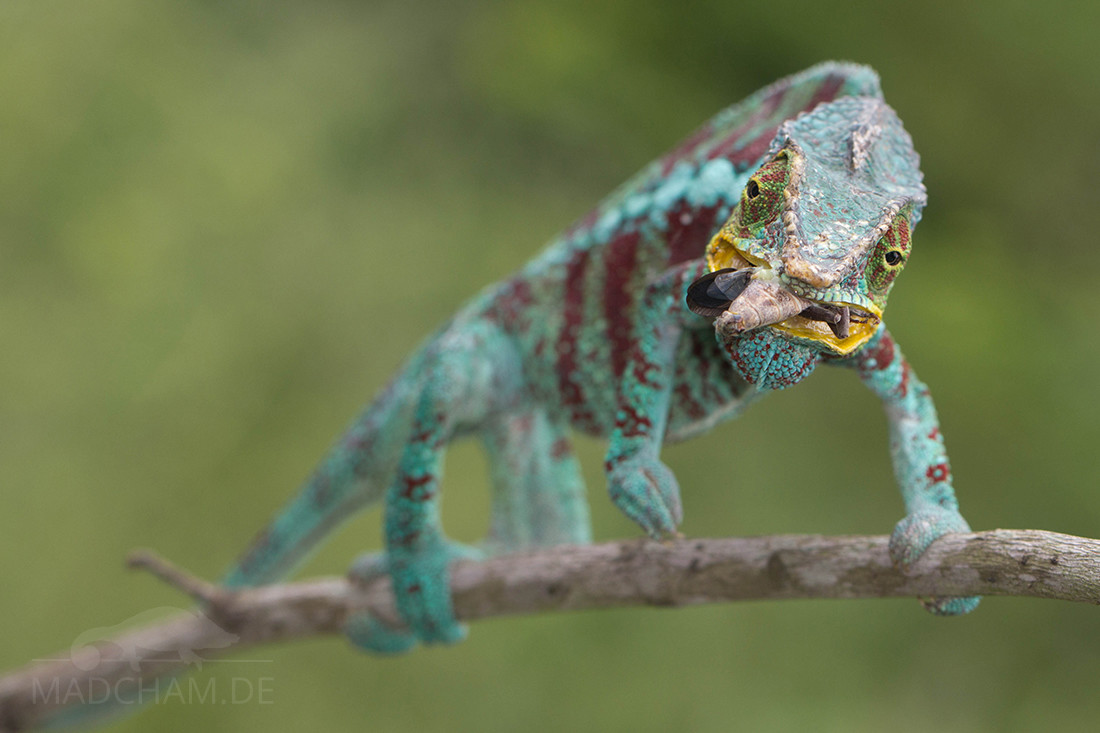 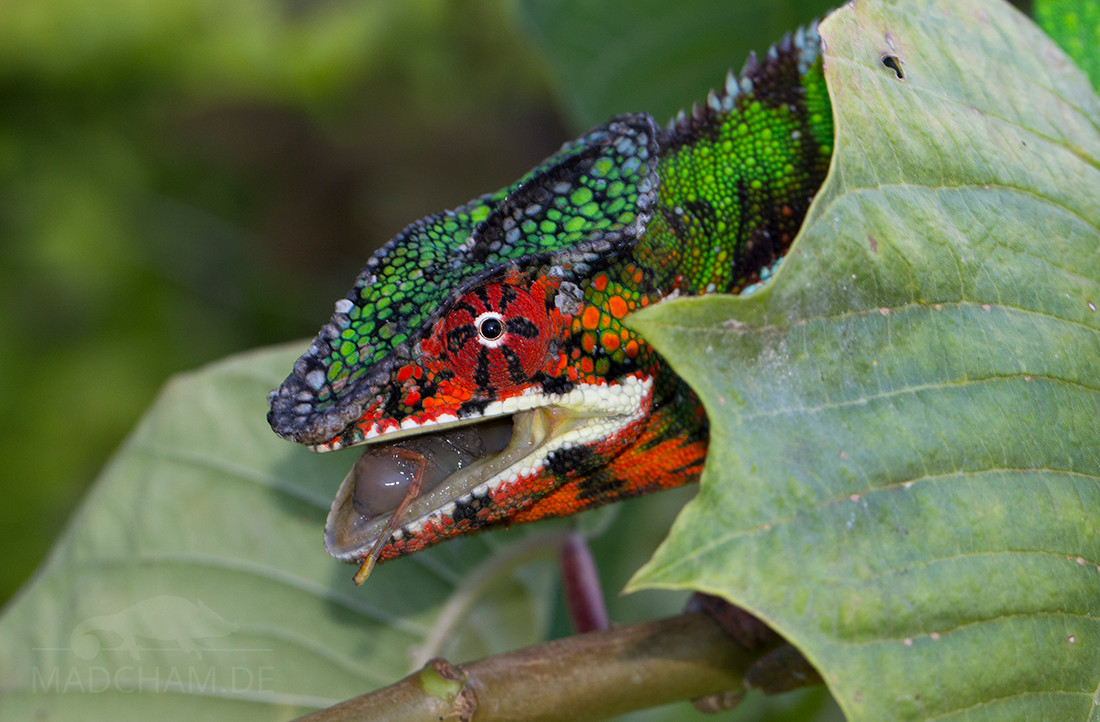 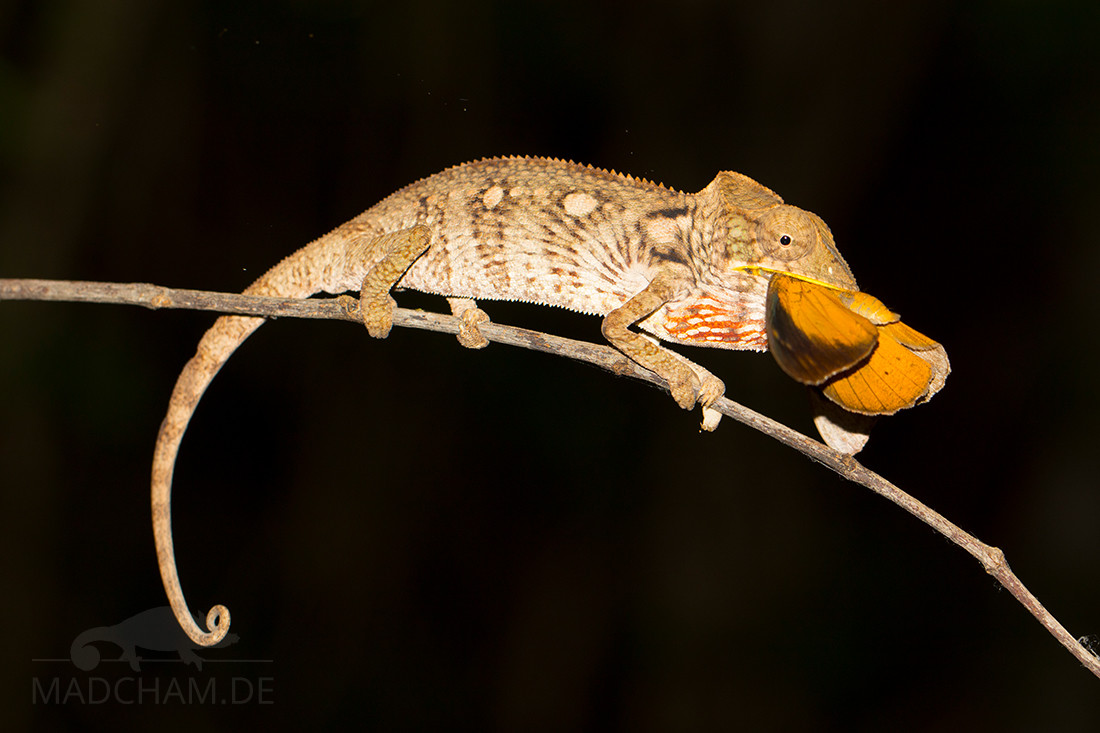 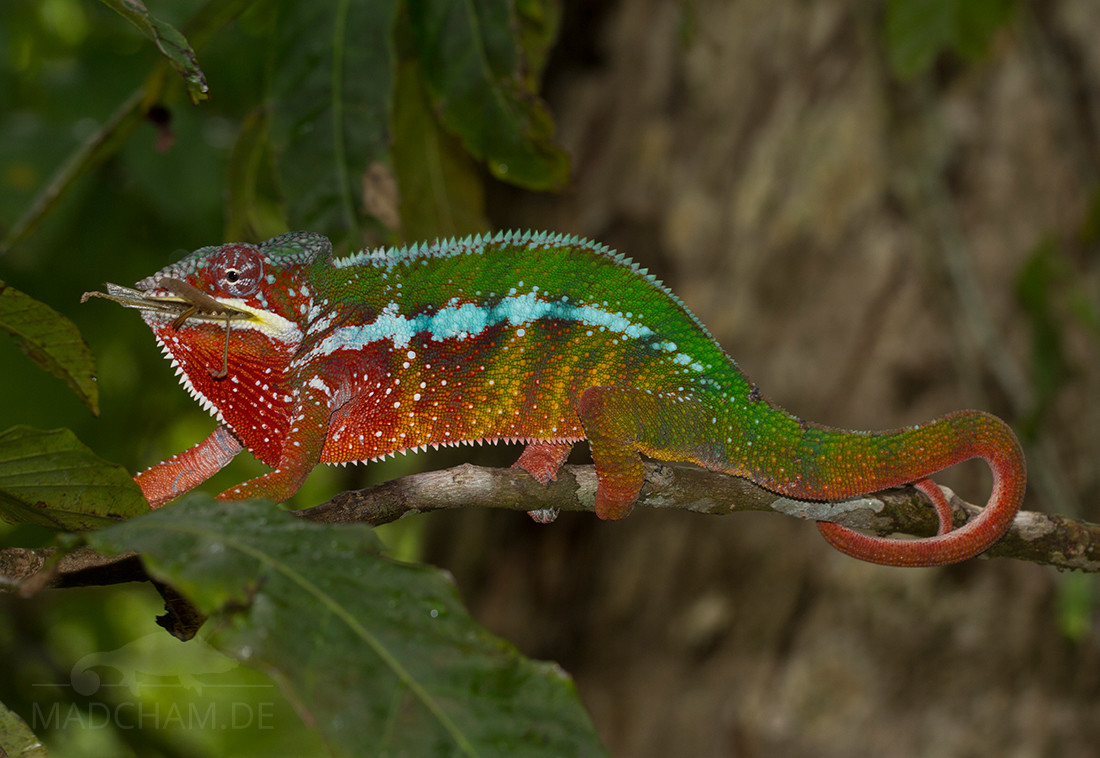 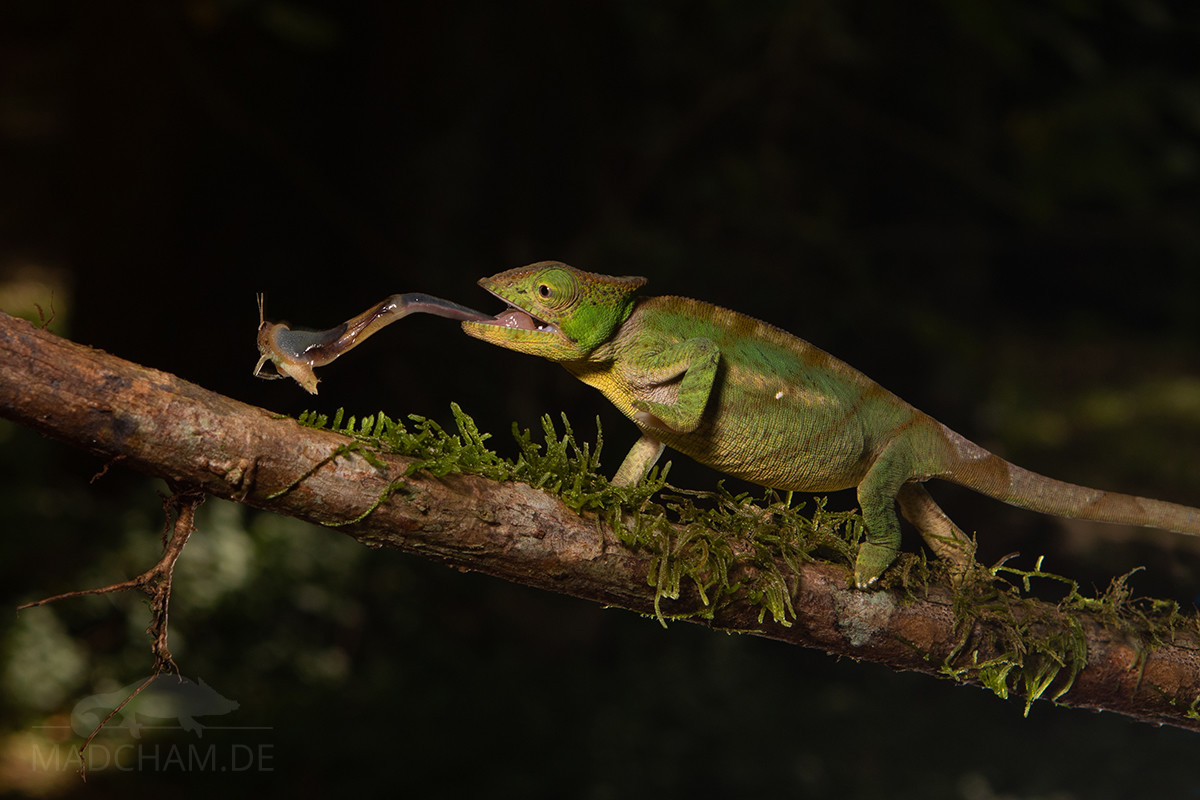 What do chameleons actually eat in Madagascar? This has not been really well studied yet. This article aims to summarize the current state of research and observations on the diet of chameleons on the red island.

For decades, chameleons were thought to be classic ambush hunters. This is the term used to describe animals that wait in one place for prey. That is why they are also called sit-and-wait predators. The prey animals walk by randomly and are shot completely by surprise by the chameleon tongue. Lurking predators save a lot of energy that other animals have to spend on active hunting.

Zoologist Marguerite Butler, currently working at the University of Hawaii (USA), suggested in 2005 that chameleons should be classified differently. She studied chameleons in South Africa and found that they were not clearly lurking. Like Malagasy chameleons, the South African animals moved slowly but continuously through the branches. In between, the chameleons kept stopping, observing their surroundings and shooting a feeder if possible. Butler suggested dividing the lurking hunters into subgroups and calling chameleons cruise foragers. This distinguishes the foraging behavior of chameleons from true lurking hunters, which actually just sit in one spot and wait for their prey.

Chameleons use two different approaches to catch prey. One variant is the characteristic tongue shot, in which the tongue is flung out of the mouth at lightning speed and withdrawn with the captured prey. A second variation is a direct pick-up of food. The chameleon approaches its prey slowly. It then extends the tip of its tongue only minimally and picks up the prey directly with its mouth without shooting its tongue. 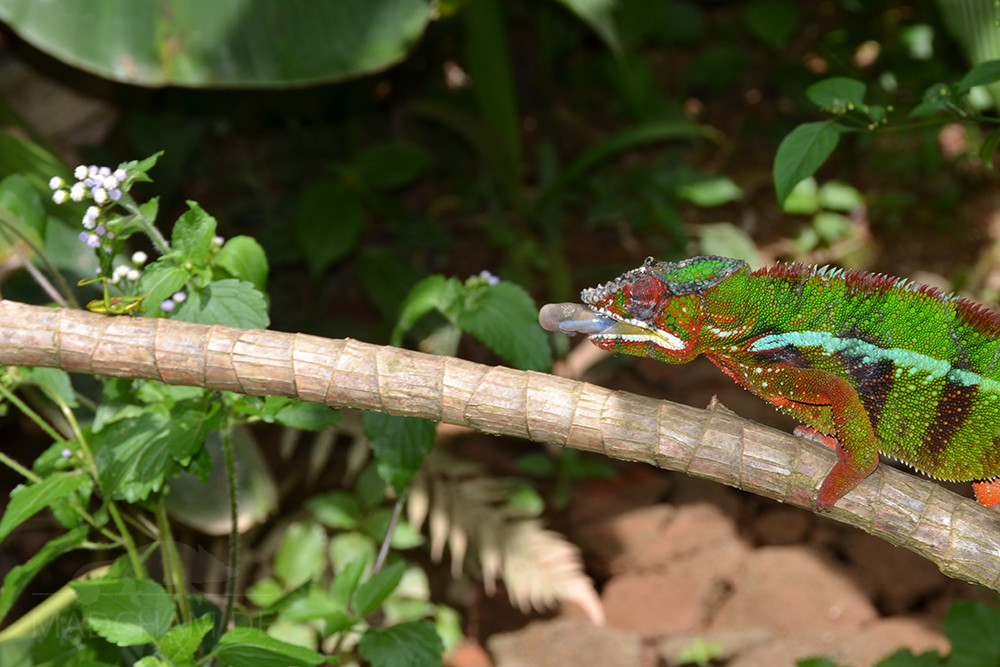 A panther chameleon in Madagascar shoots its tongue at a grasshopper

Chameleons are basically insectivorous, which means they feed on insects. Actually, invertivorous would also fit for chameleons, since Malagasy chameleons feed not only on insects but also on other invertebrates such as spiders. The choice of potential food animals is almost inexhaustibly large in Madagascar. Depending on whether a chameleon species is arboreal or lives or on the ground, different invertebrates may be considered as food.

Studies and observations on the diet of Malagasy chameleons have been few and far between. For his dissertation published in 2006, the biologist Nicolà Lutzmann examined the feces of Furcifer pardalis, Calumma radamanus, Calumma cucullatum, and the terrestrial chameleons Brookesia superciliaris and Brookesia peyrierasi, among others, on the Masoala peninsula in northeastern Madagascar. He was able to find and roughly identify parts of the various invertebrates in the feces. The study gives a good impression of the variety of food chameleons use and the large species differences that can exist in their diet. 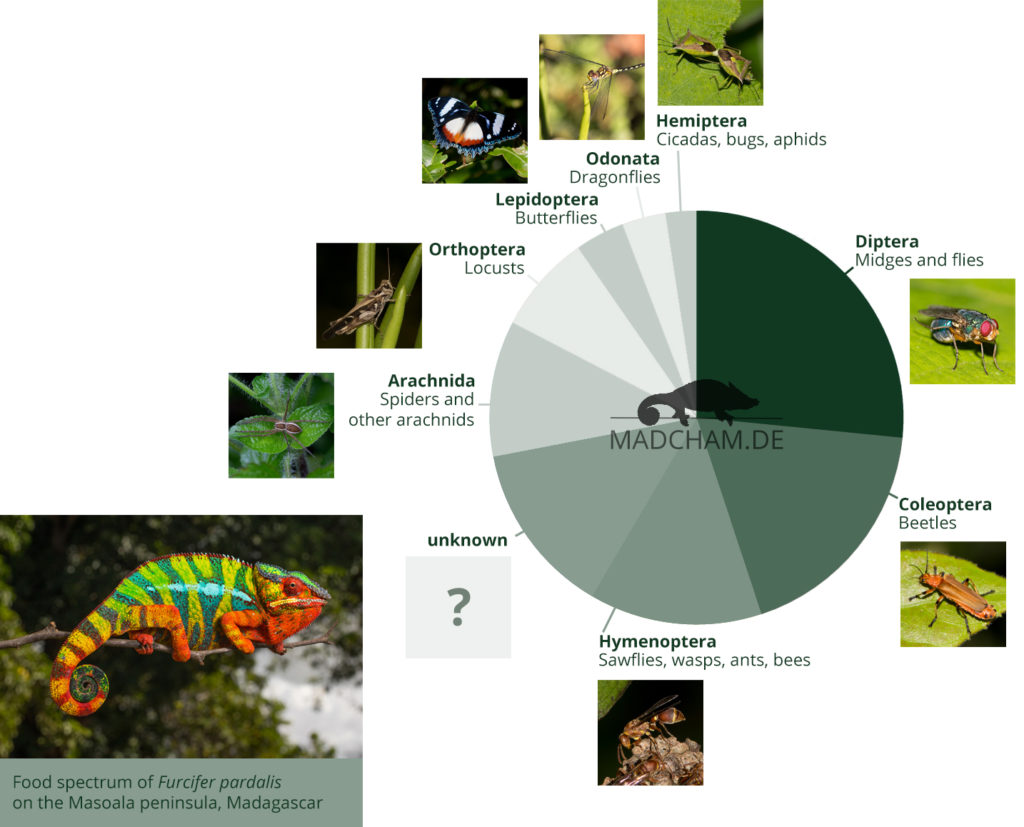 A single fecal sample was very out of the ordinary for the panther chameleons. It contained parts of 50 different insects and arachnids, of which a full 92% were flies and mosquitoes. If this sample had been excluded, the bugs would rank first in percentage of the average food animals consumed. However, the sample leaves open the question of whether individual chameleons specialize in certain food animals – and what exactly might make them do so. 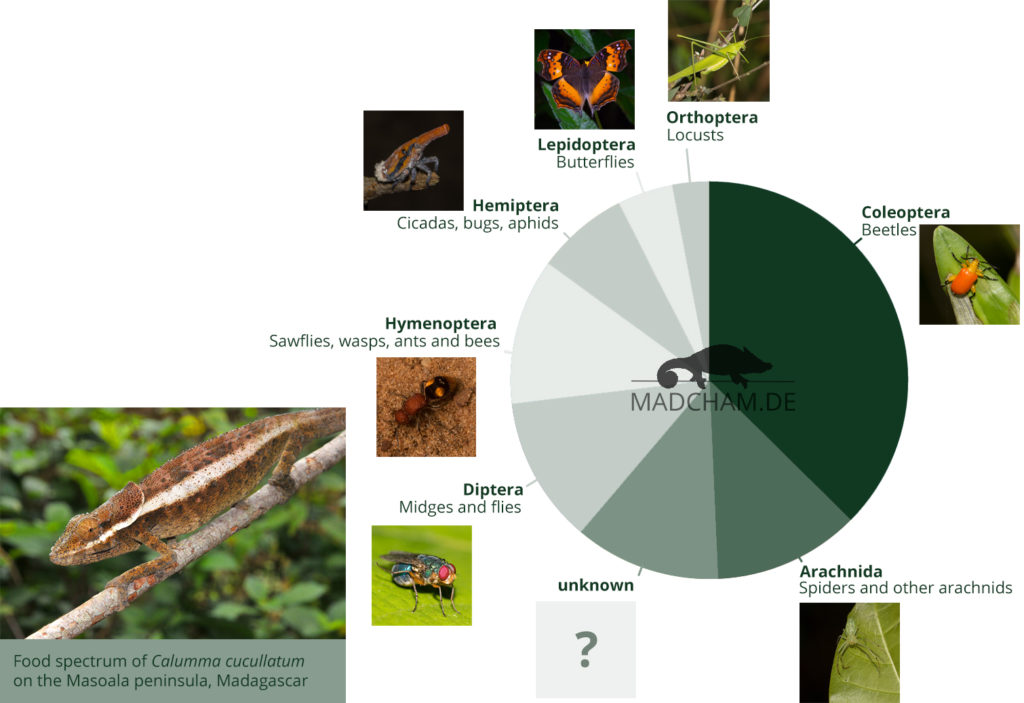 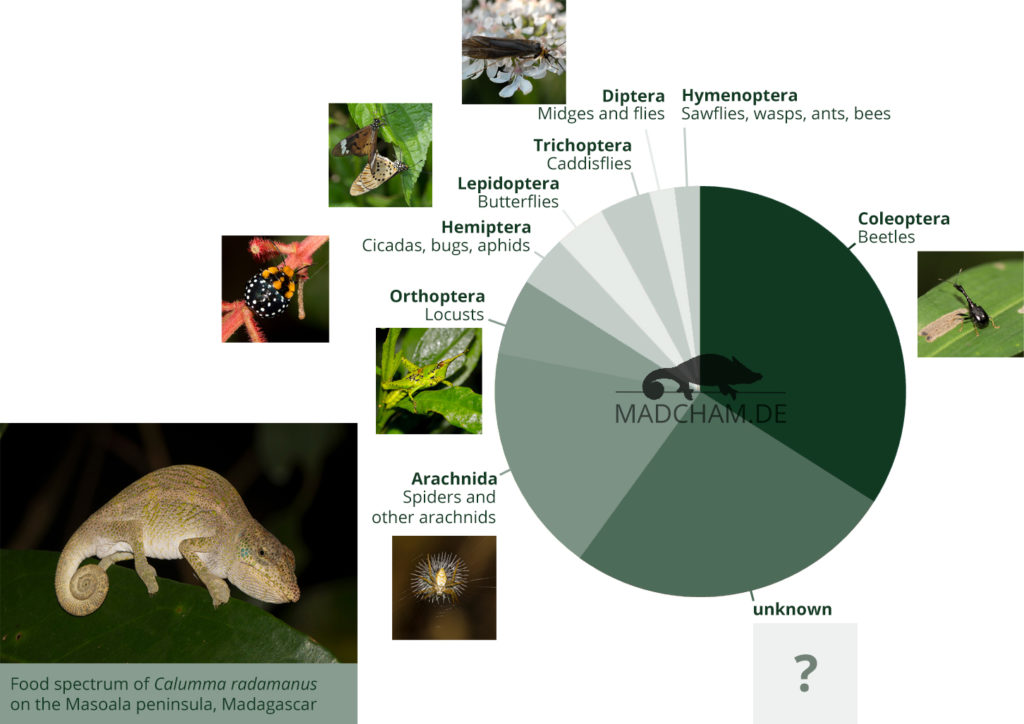 In the case of Calumma cucullatum, ants were the most important Hymenoptera. This is especially surprising because Calumma cucullatum is one of the larger chameleons. At first glance, one would not expect this species to feed on such tiny food animals. Leaf chameleons, on the other hand, can regularly be seen eating ants on Madagascar. In 2019, we observed several Brookesia tuberculata feeding directly above a partially destroyed ant nest in the Amber Mountain rainforest. The small chameleons repeatedly shot ants that were busy carrying ant eggs from the destroyed nest to a new one. 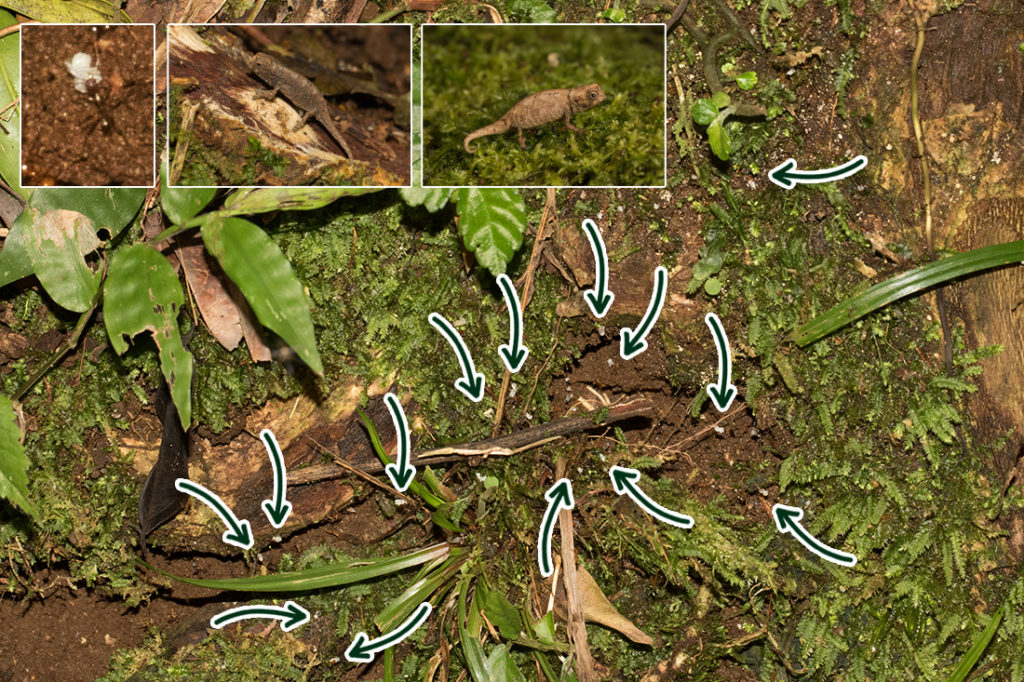 The destroyed ant nest in the Amber Mountain. While ants are busy transporting eggs away, quite a few become food for Brookesia tuberculata. 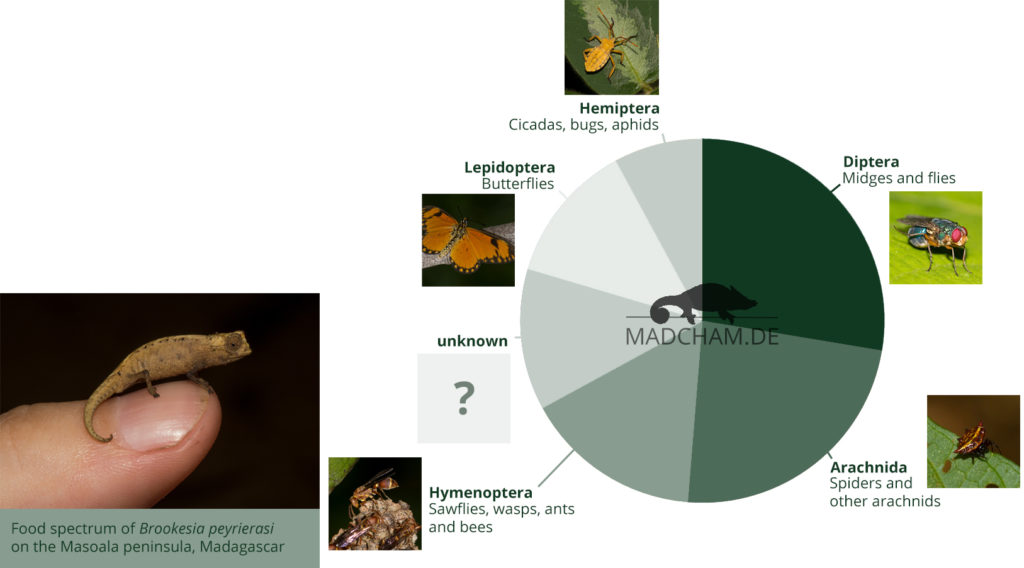 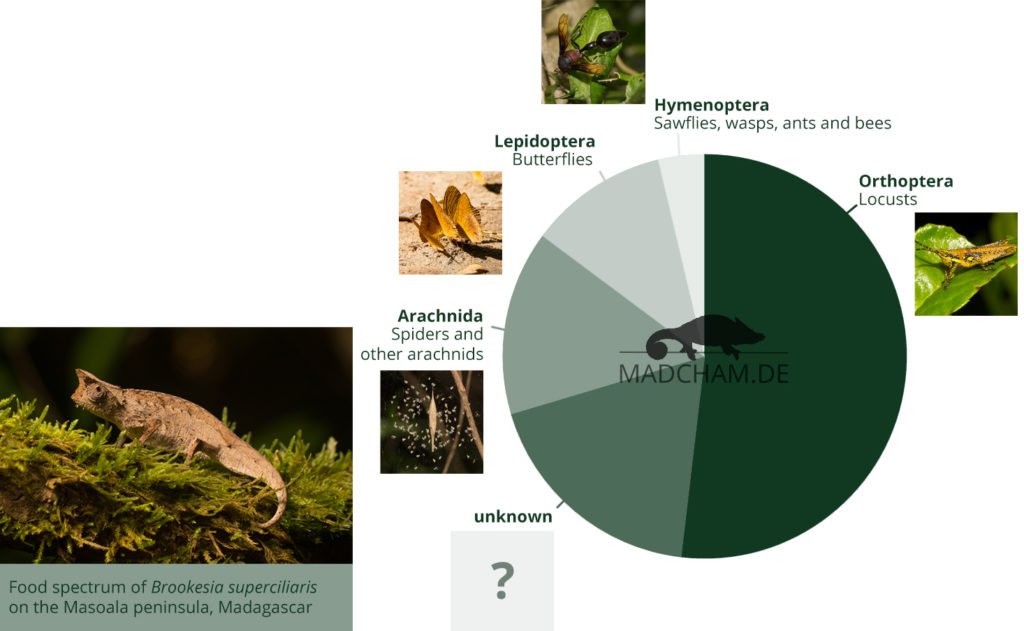 Already in this relatively small sample pool of 54 fecal samples, differences in the food spectrum between different chameleon species can be detected in Lutzmann’s study. Presumably, therefore, the results cannot simply be transferred to other species in other regions of Madagascar. In addition, the used food animals are probably subject to seasonality: In the rainy season, the supply of insects and arachnids is particularly good on Madagascar. Therefore, chameleons probably consume much more food animals in the rainy season and can choose which ones are particularly attractive. In the dry season, they eat what is there – in the south and west of Madagascar this is not very much. In the central and southern highlands of Madagascar, we notice high numbers of small cone-headed grasshoppers every year towards the end of the rainy season. They are shot very regularly by Furcifer lateralis, Furcifer minor, and Furcifer oustaleti Calumma amber und Calumma ambreense, Furcifer viridis und Furcifer pardalis.  In the dry season, however, these grasshoppers are no longer available in such large numbers.

It is also possible that the age or weight of the chameleons plays a role: larger chameleons can prey on larger insects than smaller ones. However, the above-mentioned study revealed mostly feeding animals with estimated total lengths of three to eleven millimeters. Only in Furcifer pardalis and Brookesia superciliaris, individual feeders were over three centimeters in total length. This would mean that chameleons probably prey on and consume many small food animals rather than a few large ones. However, it is unclear how well the wings, feet, and heads of insects and arachnids found in the feces can be used to infer their original body size. In the same way, individual observations can certainly not indicate the food spectrum of an entire chameleon species. But at least these are already a clue.

It is interesting that the frequently encountered stick insects (Phasmatodea) and praying mantids (Mantodea) are apparently not as many used food animals for chameleons as one might assume based on their frequent occurrence. In the case of Phasmatodea, this could be primarily because they are nocturnal and are poorly perceived as prey by chameleons during the day. Cockroaches (Blattodea) are also frequently found on Madagascar, but due to their rather hidden, light-shy lifestyle they probably do not regularly end up in chameleon mouths. The variety of beetles, cicadas, and bugs on the other hand seems to offer an enormous food spectrum for chameleons on Madagascar. The following photos show a small (!) selection of the food spectrum of chameleons on Madagascar.

In Madagascar, millipedes (Myriapoda) and centipedes (Scolopendridae) are also found in almost all habitats inhabited by chameleons. We have never been able to observe these actually being swallowed by chameleons. Smaller species seem to be shot now and then rather accidentally. However, since most Malagasy millipedes have unpleasant, albeit harmless, defensive secretions (hydrocyanic acid, quinones), they are likely to be spat out again. Scolopendridae, on the other hand, can bite enormously painfully, so they are unlikely to be eaten regularly. We could observe the consumption of centipedes on Madagascar with Madagascar iguanas, but not with chameleons.

Snails, especially nudibranchs, are occasionally shot by chameleons. This has already been observed with Furcifer pardalis. However, the tip of the tongue often slides off them and they cannot be picked up and swallowed.

There are a few anecdotal reports from Madagascar where chameleons have preyed upon and eaten smaller reptiles. We have ourselves observed adult Calumma brevicorne and Furcifer oustaleti shooting or attempting to shoot young geckos (Phelsuma ssp. and Lygodactylus ssp.) on a few occasions. A Furcifer oustaleti was observed eating a small bird in 2000 by Gerardo García in Ankarafantsika. The bird was probably a Madagascar Weaver (Foudia madagascariensis). Ardi Abate reported as early as 1995 of Madagascans reporting consumption of small birds by Calumma parsonii parsonii in northeastern Madagascar. However, such observations seem to be rather isolated cases. Especially since large or badly “swallowable” prey are also gladly spat out from time to time. Malagasy chameleons seem to overestimate their ability to swallow large prey.

From time to time cannibalism occurs among chameleons, that is, a larger chameleon shoots a smaller one as prey. Especially young animals fall victim to other chameleons. We have already observed this in Calumma parsonii parsonii, in literature cannibalism was also seen in Furcifer verrucosus and Furcifer pardalis. However, all Malagasy chameleons are probably capable of this behavior. 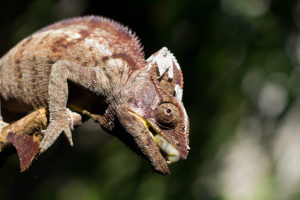 Only a few reports are known of Malagasy chameleons, in which the ingestion of plants was observed. We ourselves have never seen it on Madagascar. Biologist Hiroo Takahashi was able to observe three different Furcifer oustaleti in Ankarafantsika during the 2008 rainy season, all three eating fruits of plants. On one occasion, an adult male bit off half a fruit of a golden plum plant (Grangeria porosa). One juvenile ate three small fruits from a redbud plant (Chassalia princei). Another adult male shot fruit from a mahogany plant (Malleastrum gracilei). Takahashi then tested 24 Furcifer oustaleti to see if they would rather eat a tiny fruit or a horse fly. Thirteen of the chameleons ate both. Furcifer oustaleti thus appears to be predisposed to eating certain fruits. Unfortunately, this does not yet allow us to draw many conclusions about populations in other areas of Madagascar, about behavior in the dry season, or even about other species of chameleons. We could not yet observe this behavior ourselves.