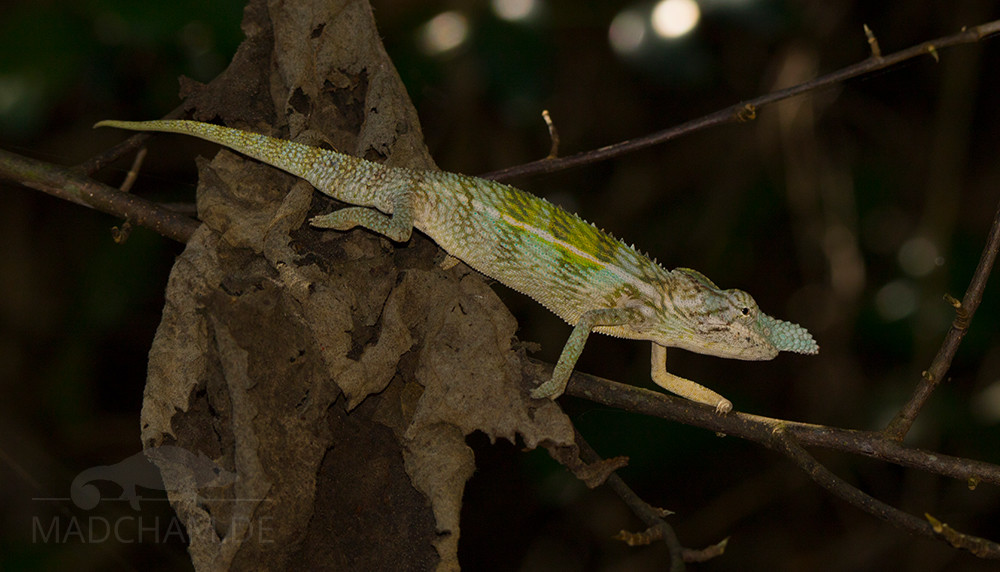 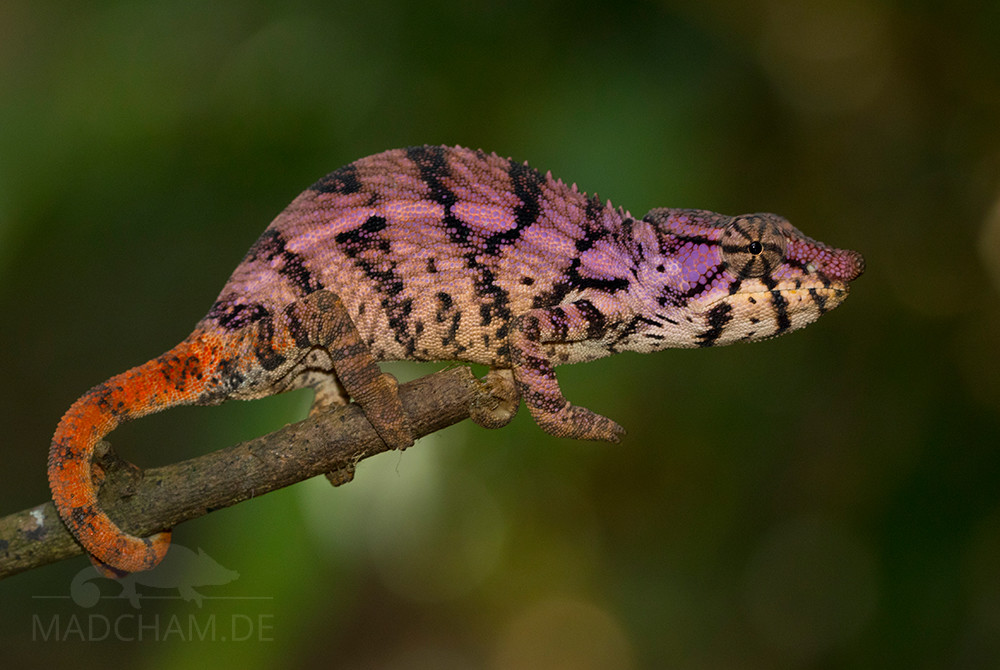 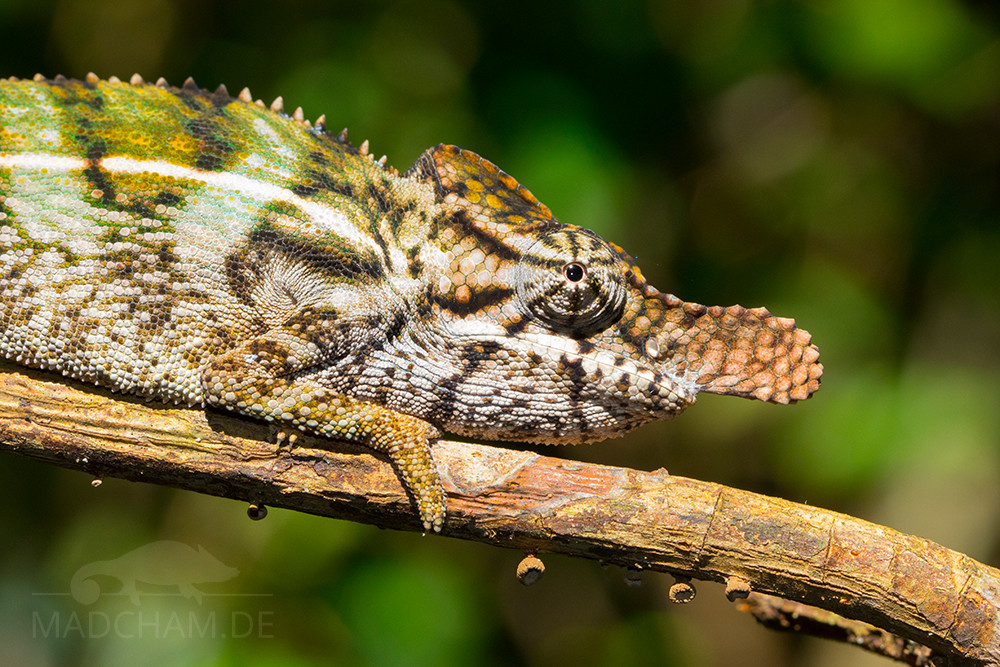 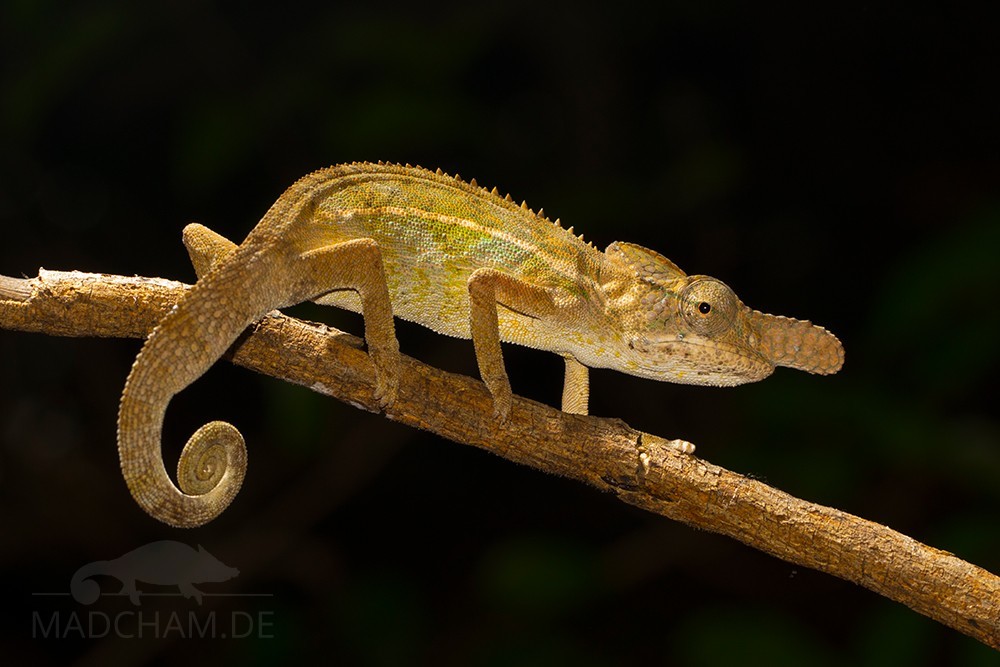 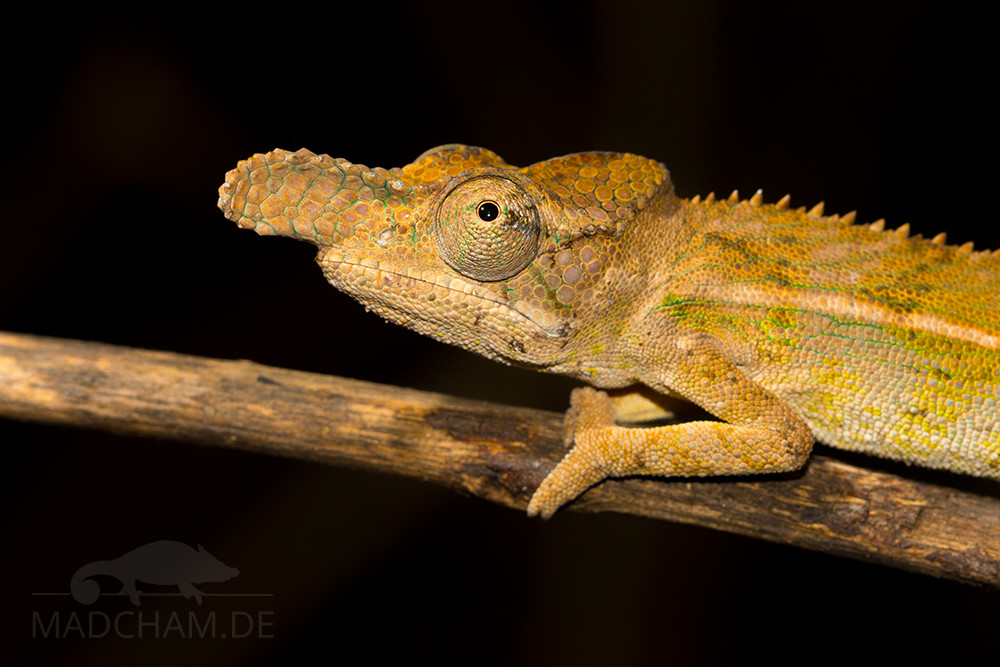 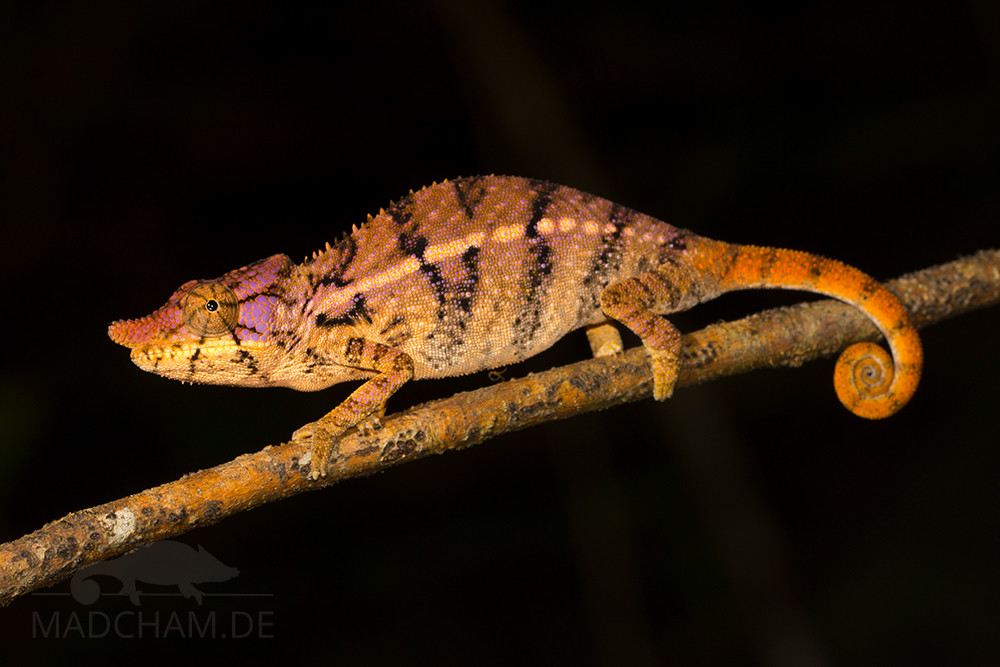 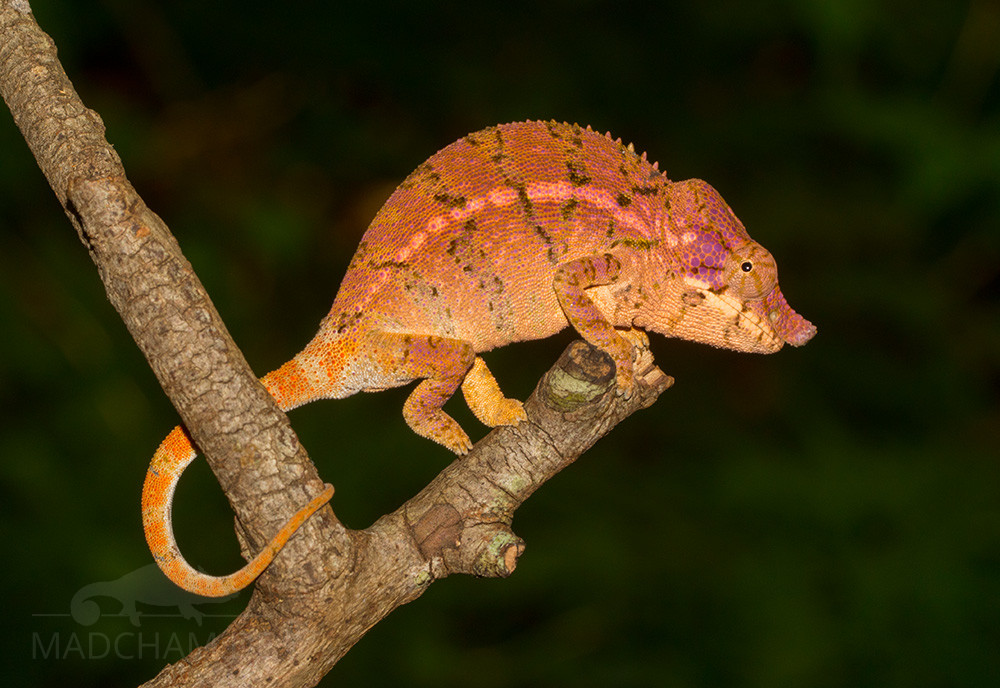 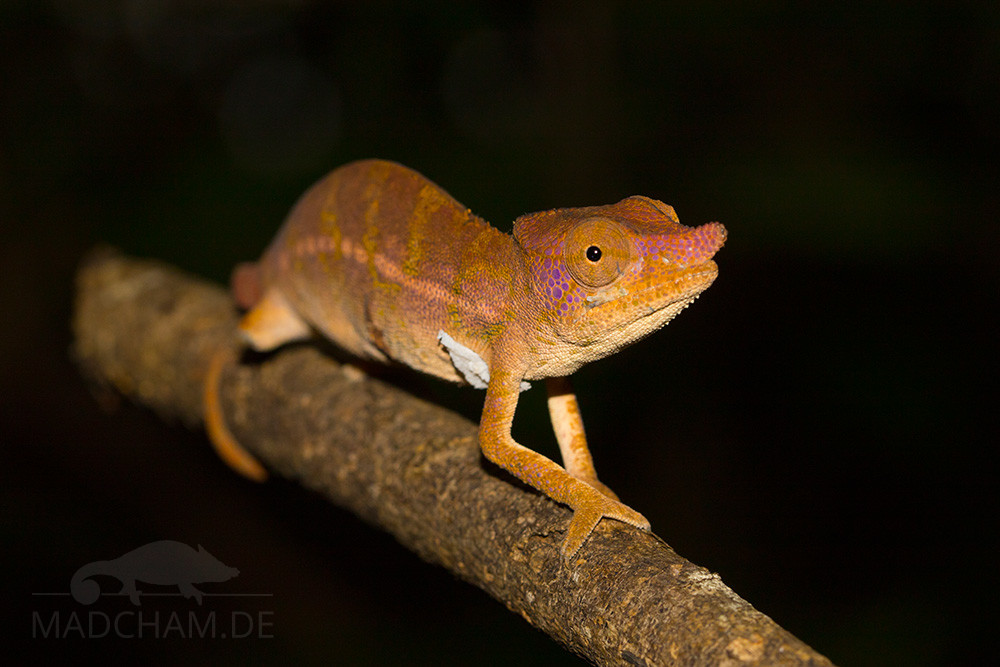 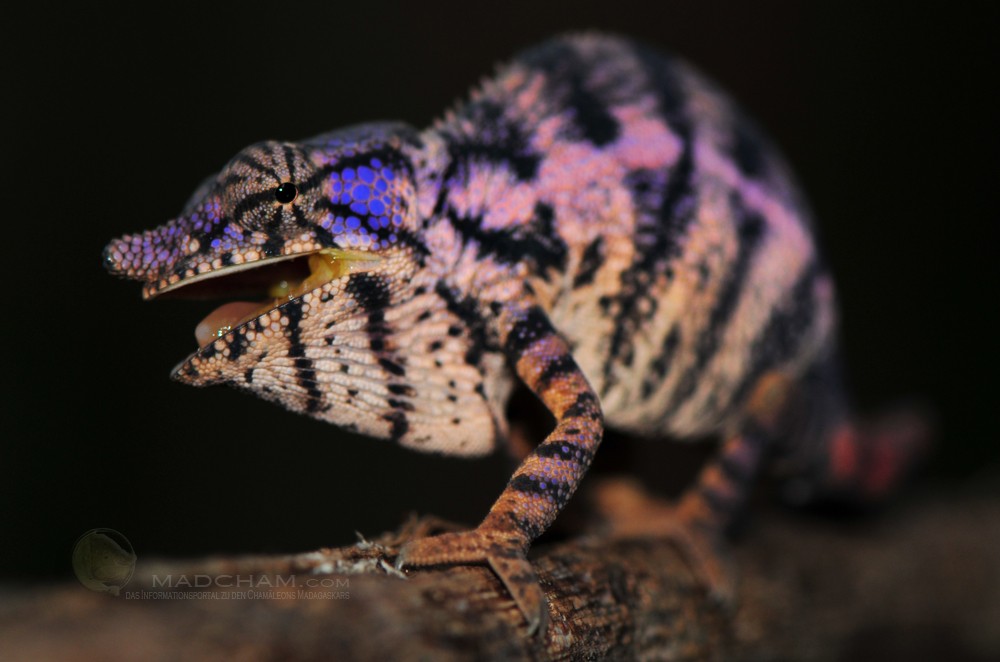 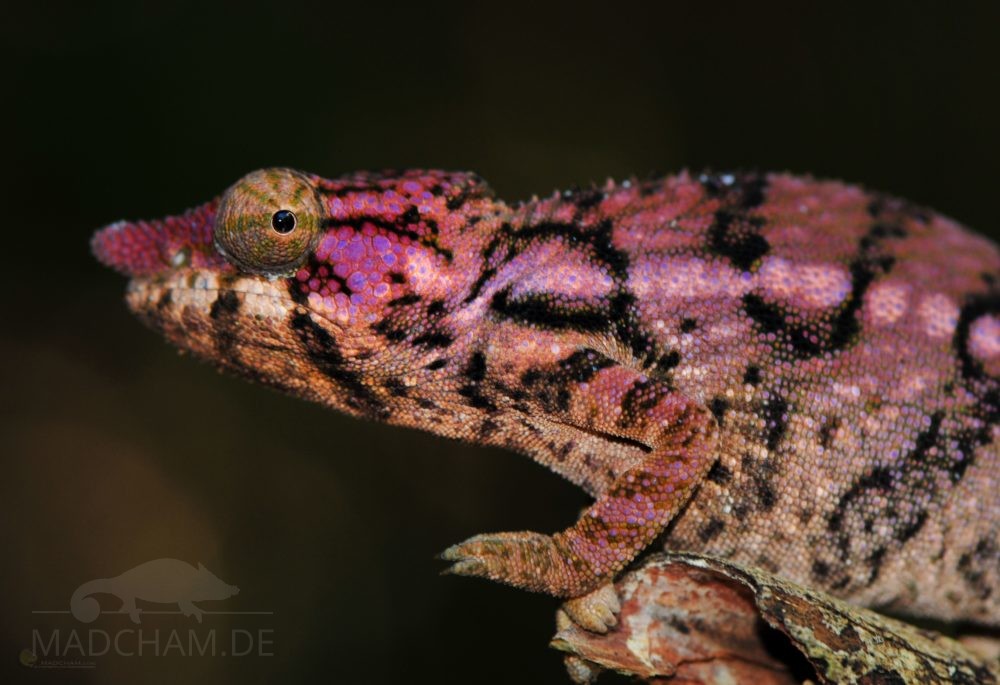 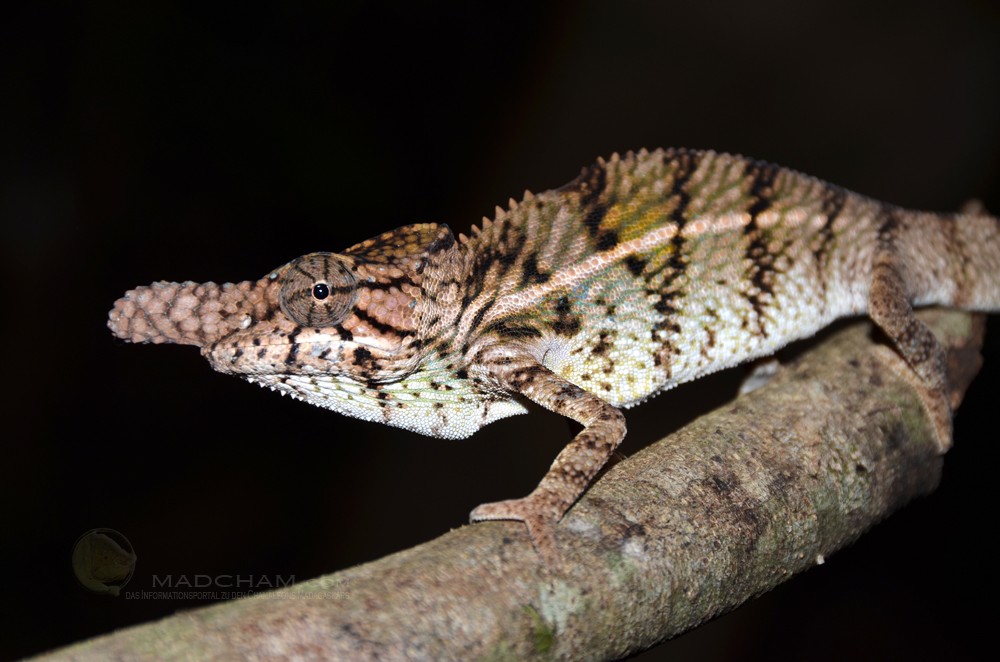 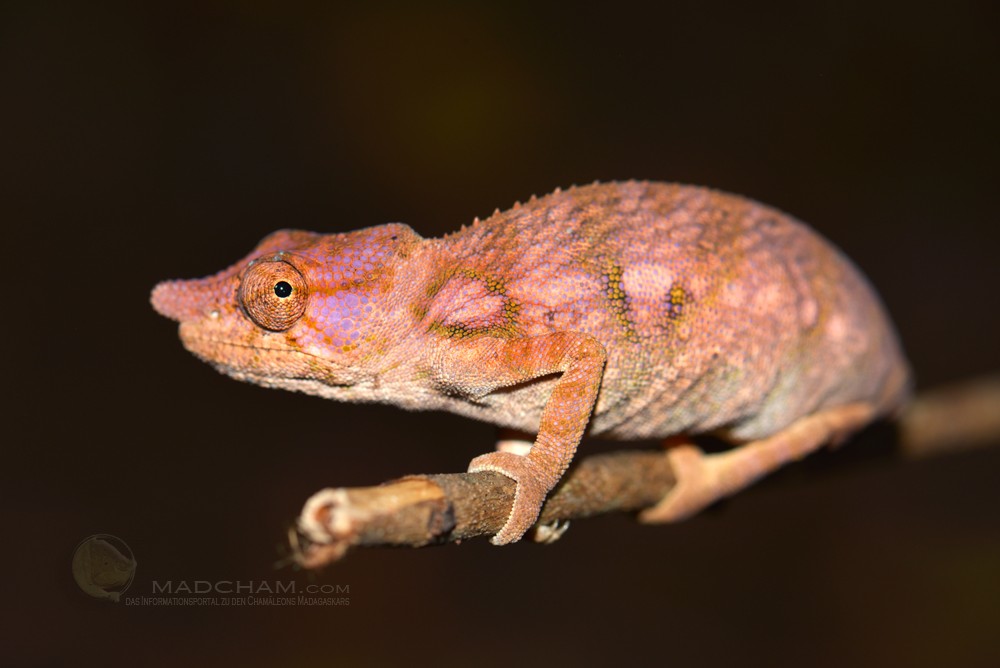 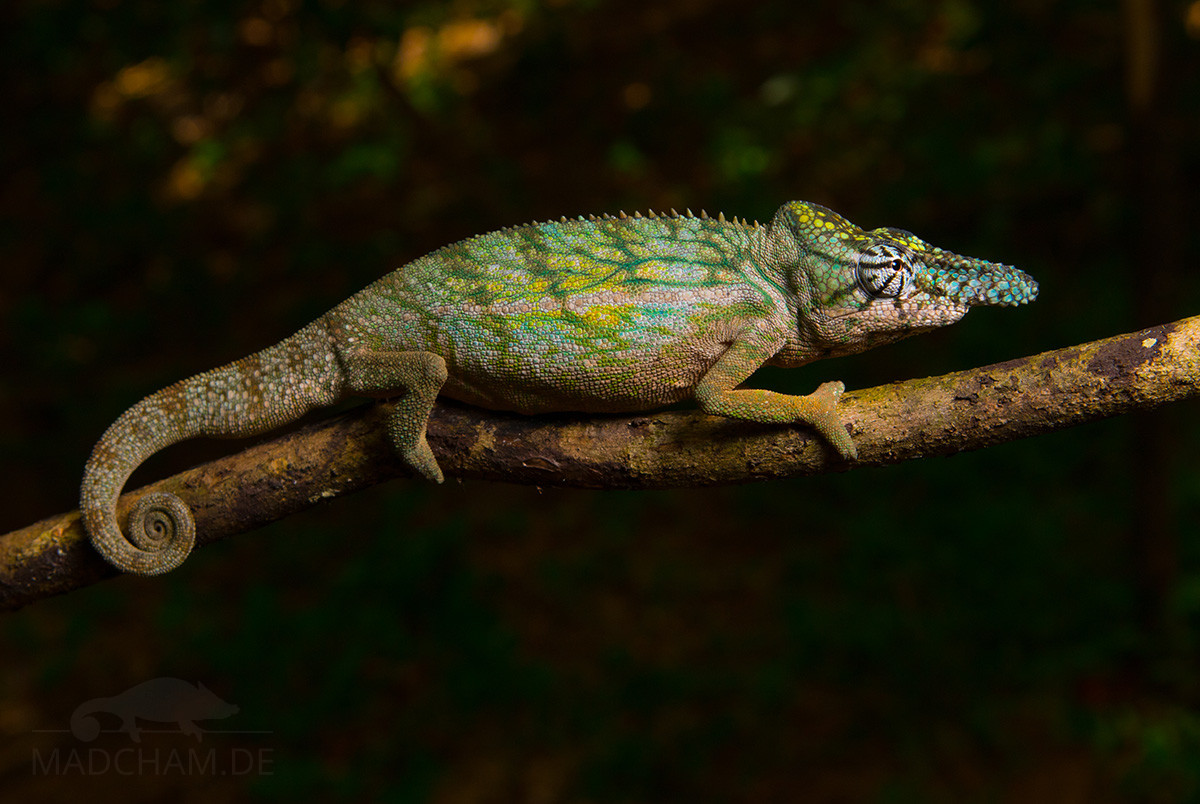 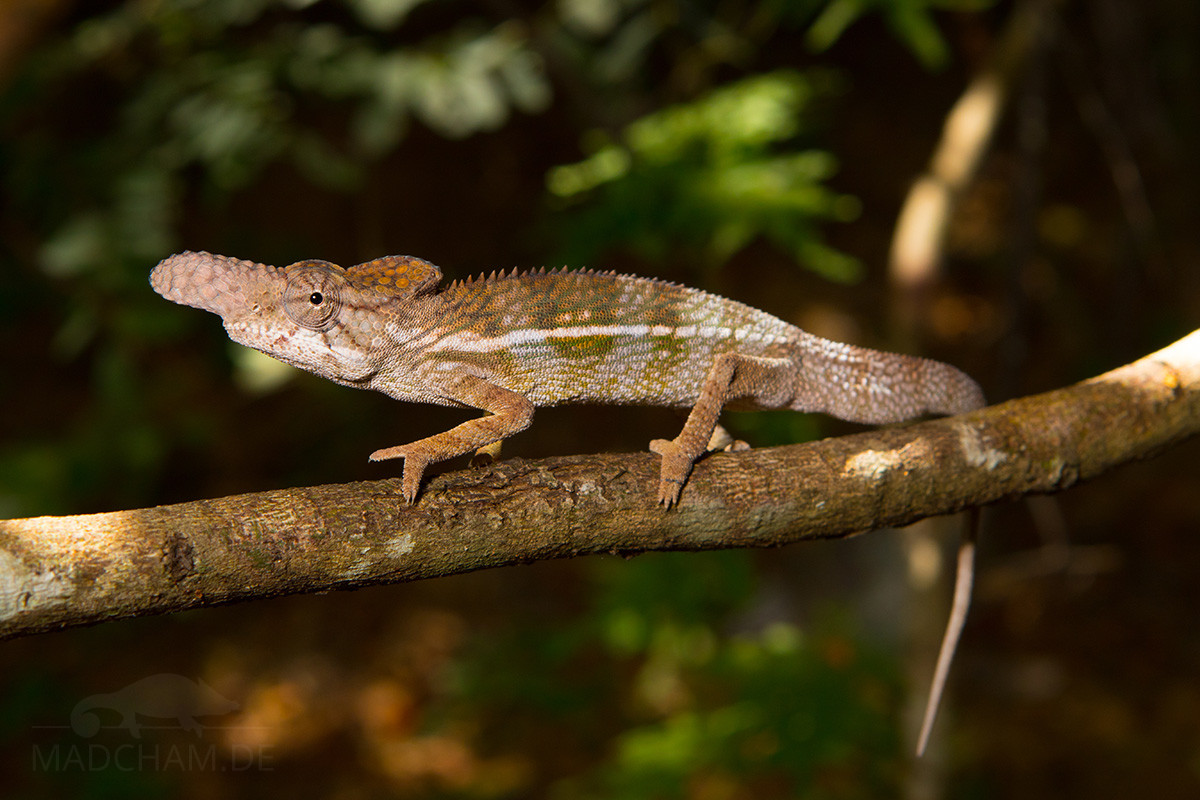 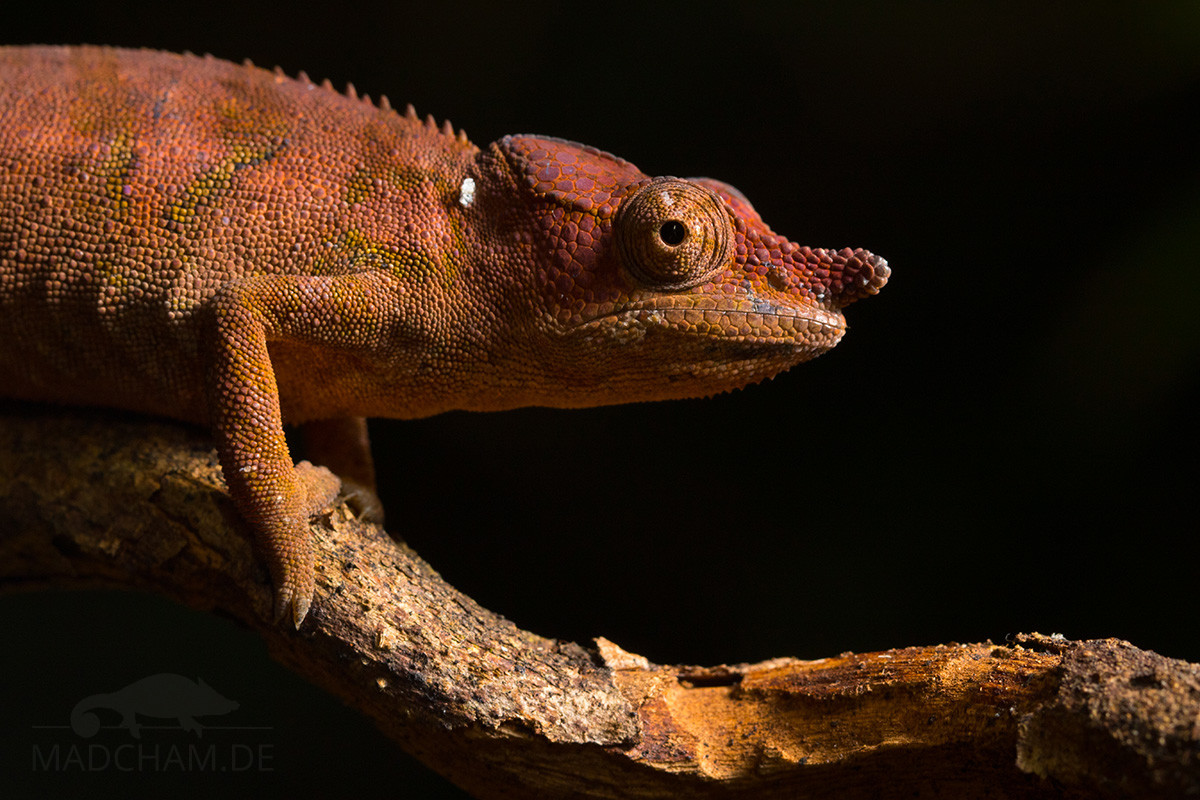 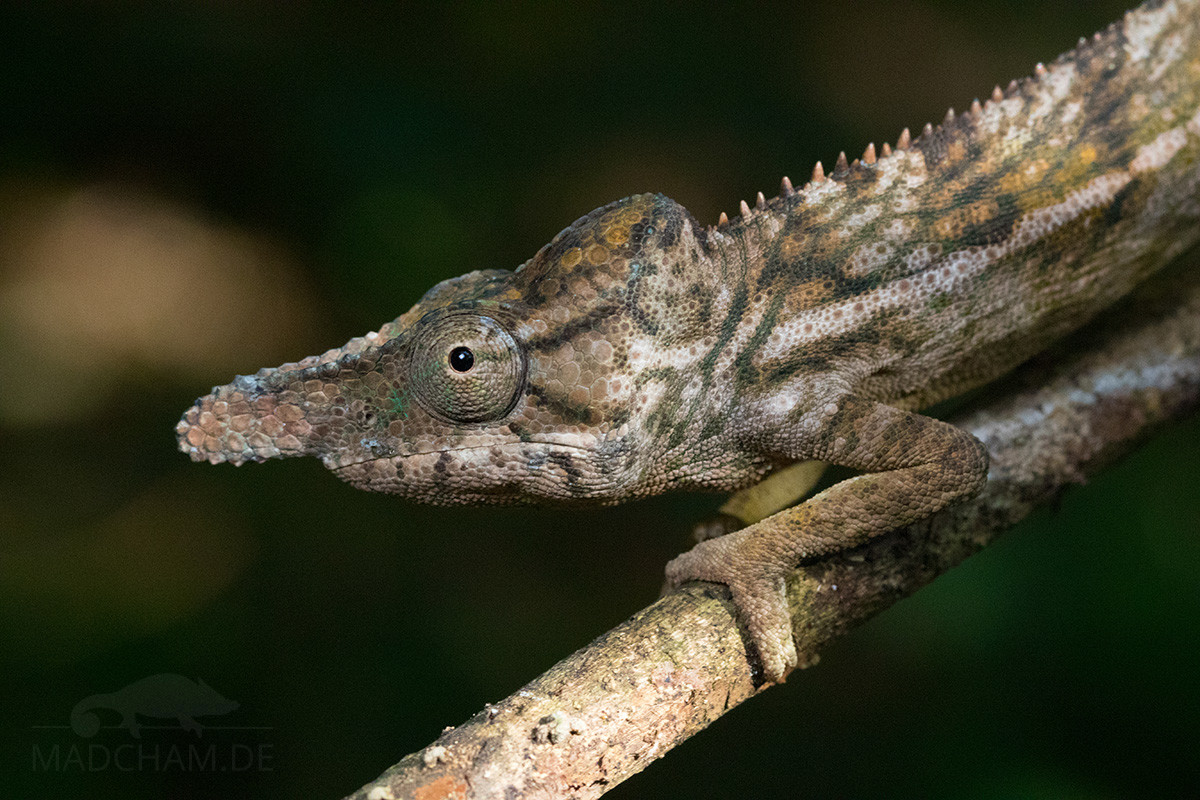 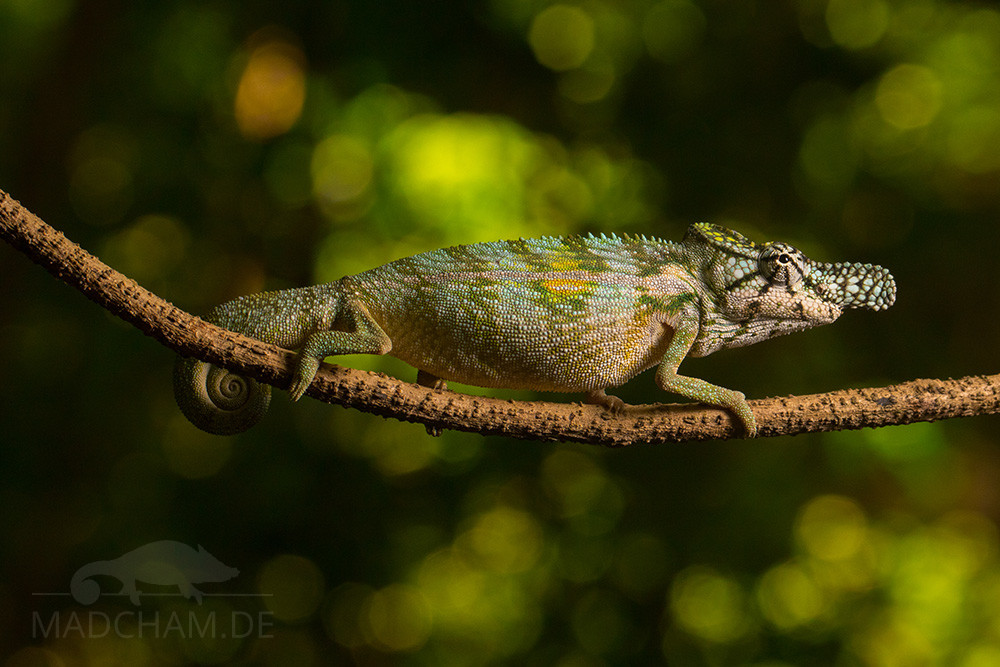 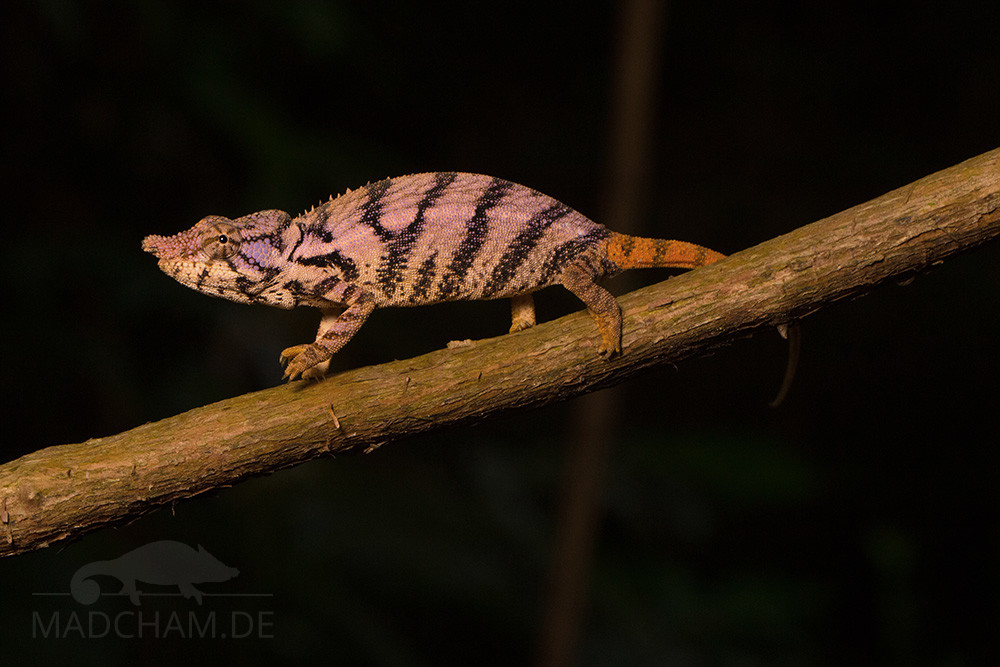 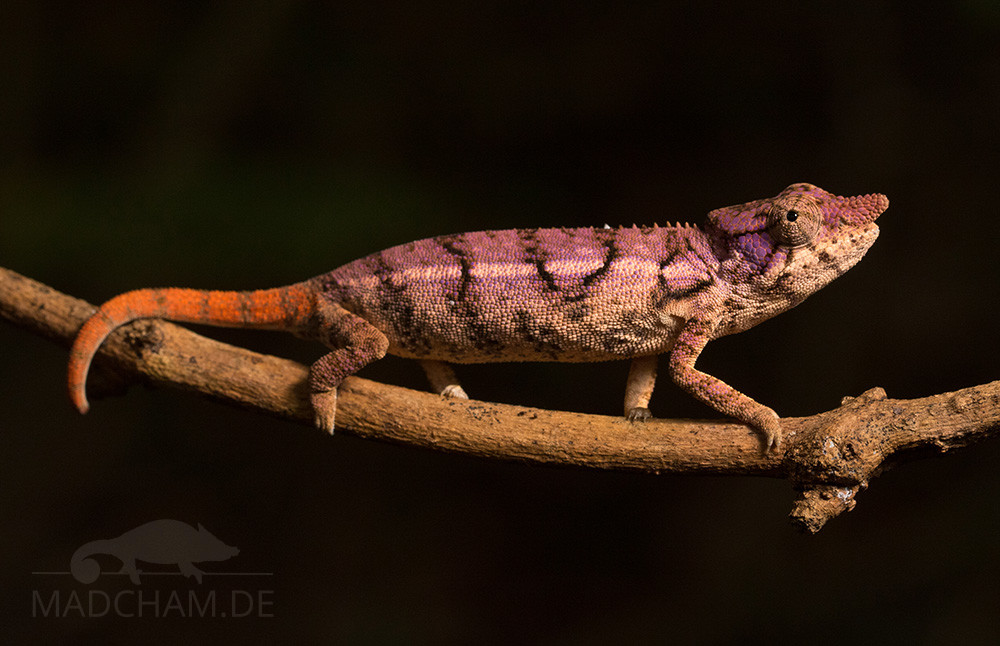 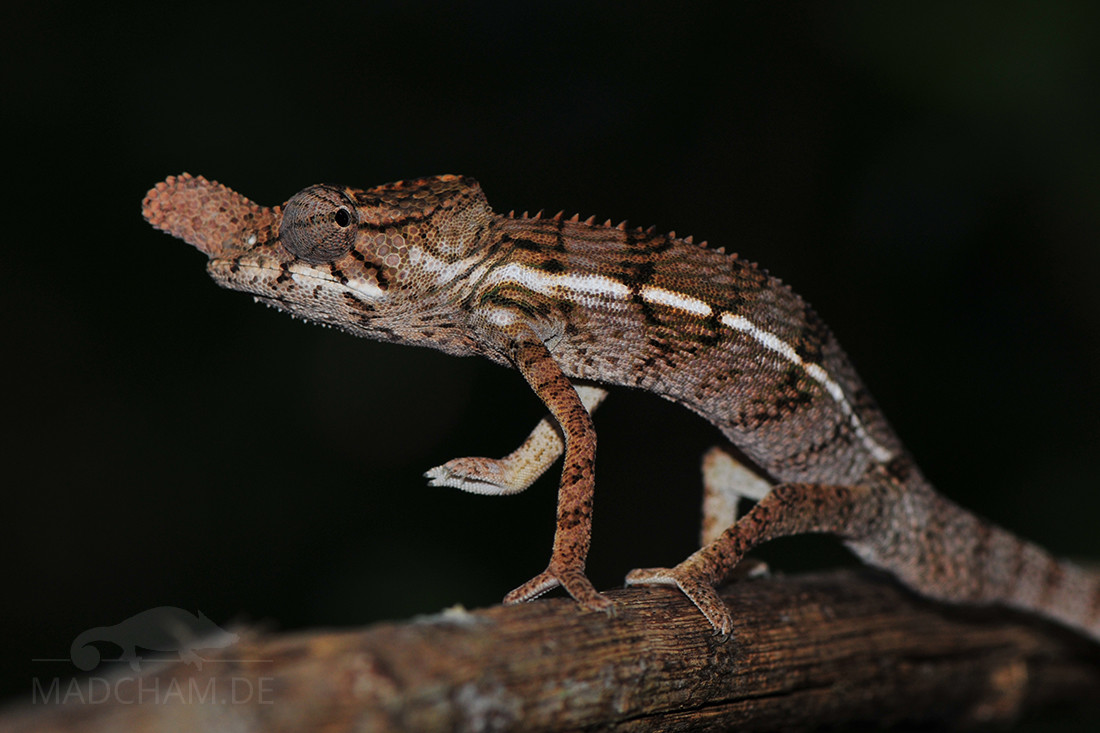 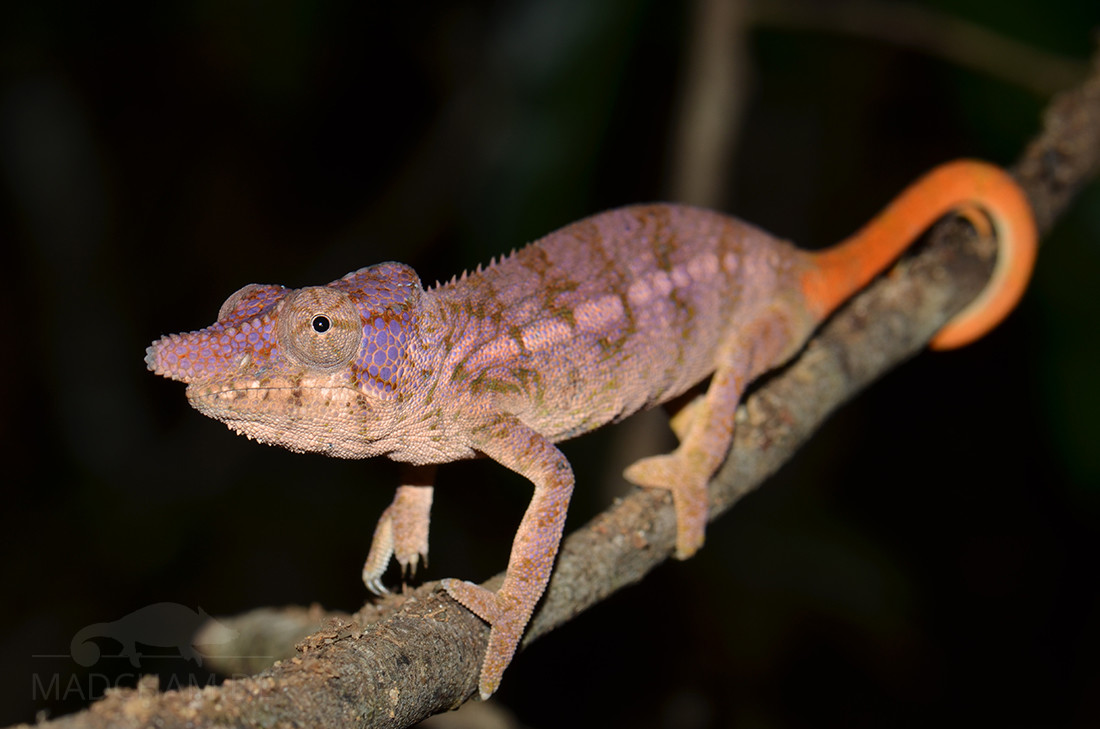 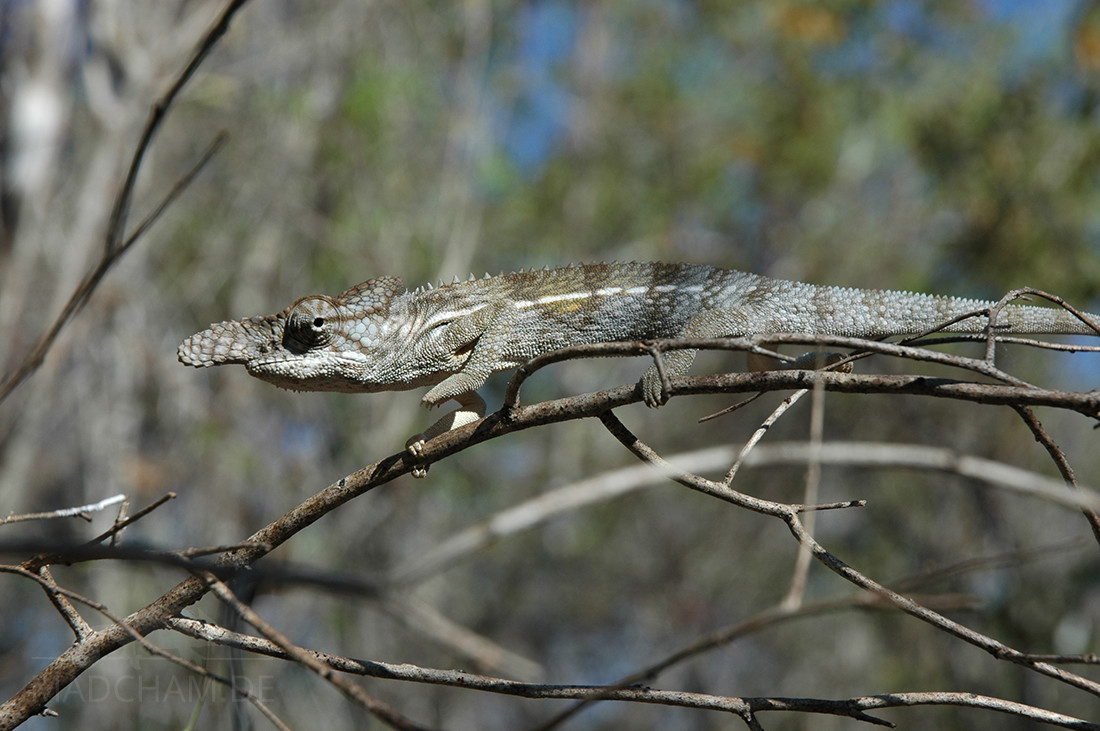 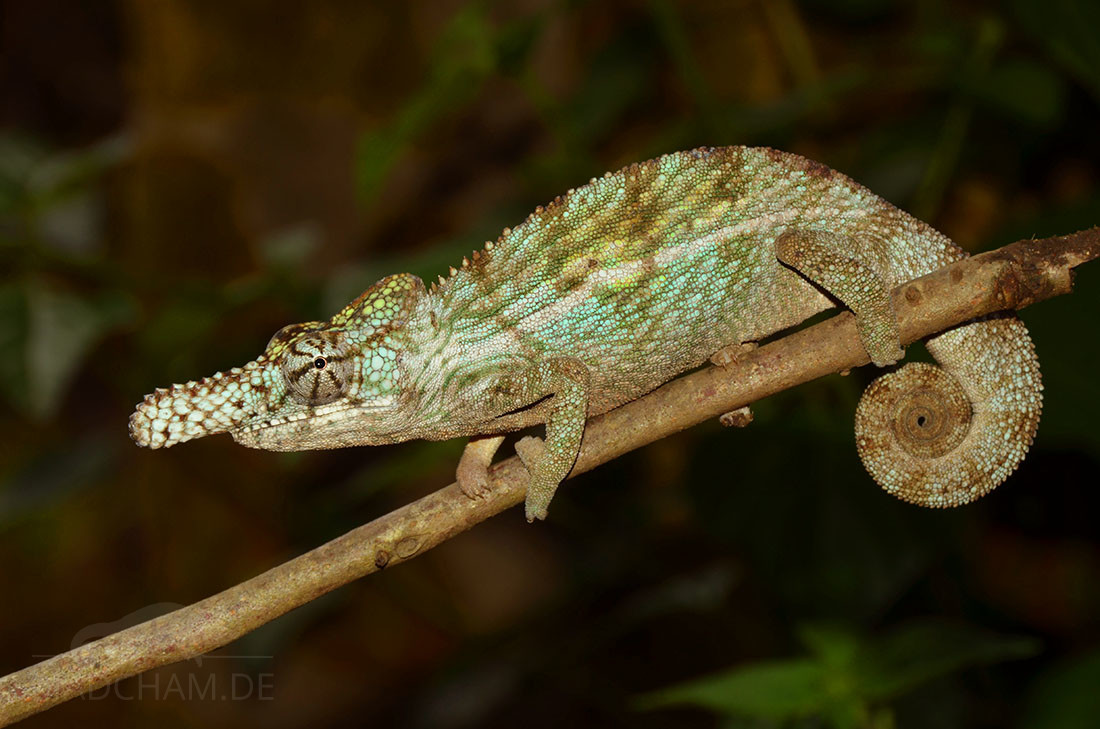 The English zoologist John Edward Gray described the species very briefly and named it after the Latin rhinoceros. By this, he meant the different pronounced nasal processes of the two sexes. Gray has never been to Madagascar himself. He categorized the reptile collection of the zoological department of the British Museum in London (Great Britain). The first specimens of Furcifer rhinoceratus had come to London on intricate routes with the British navigator Sir Edward Belcher.

This chameleon species is found almost exclusively in the forests of Ankarafantsika and Ampijoroa in north-western Madagascar, about 150 kilometers from the coastal town of Mahajanga. The animals live in the deciduous dry forests of this region, at a height of 1.5 – 4 meters. Especially small lianas and climbing plants, as well as tall shrubs, are populated as habitats. In our experience, they are mainly found in shrubs or trees with very thin branches and abundant small foliage.

With approximately 28 cm with the males and approximately 12 cm with the females, this chameleon-type belongs to the middle-sized types. The males show a single, big, rounded off nose-process, that turns out clearly smaller with the females. The helmet is flat, the dorsal scales are pronounced only in the front area. The males are mostly grey with white lateral stripes, partly also light green with turquoise accents. They are grey-brown with a dark ribbon pattern when stressed. Only when a female comes very close to them do the males show their full-color splendor: then they shine turquoise green and light blue with yellow lines. However, we have only been able to observe this splendid coloring for a few minutes – if the female turns away and runs, the great coloring of the male disappears very quickly. The females of Furcifer rhinoceratus are altogether more colorful. They are simply relaxed pink, sometimes with green, ring-shaped patterns, and always with a bright orange tail. Excited or pregnant females are deep purple with dark bands.

The following photos show juveniles of the species, all-male. 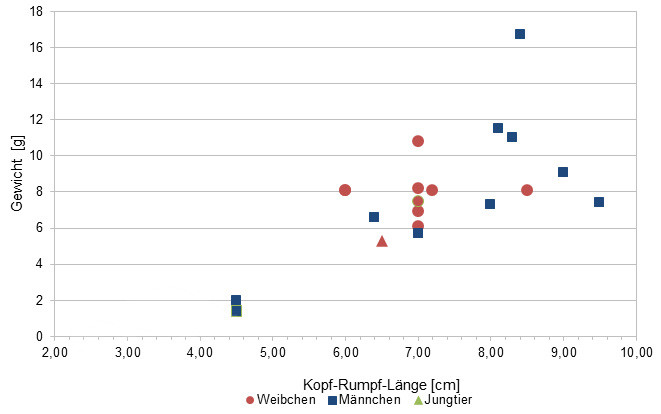 Since 2015 we have been measuring the weights of chameleons we have found in Madagascar, as far as the animals (and our scales) are participating. So far there are only a few weights, in the long term an average weight in relation to the snout-vent-length It is important to know that all weights were measured towards the end of the rainy season (= best food supply), so they are probably maximum weights in Madagascar. Triangular symbols in females do not mean pregnant, round symbols mean pregnant. In the case of Furcifer pardalis, contrary to our original assumption, there have been no serious differences in the ratio of SVL to the weight of the individual locales. 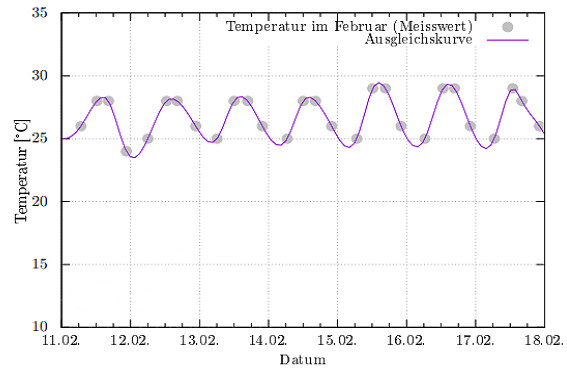 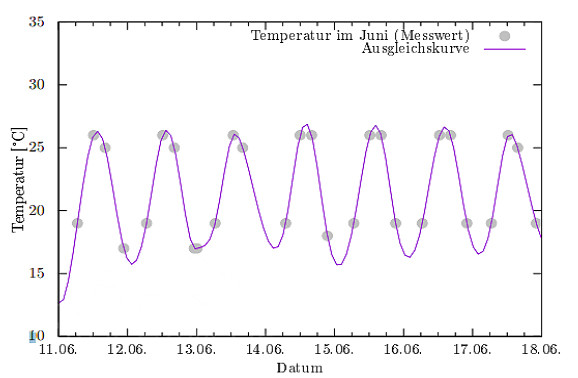 The following video shows footage directly from the habitat: A female digging a hole to lay her eggs.

The habitat in the dry forest of Ankarafantsika is green only during the rainy season. During the dry season, it is less green, the grass dries out and the leaves fall from the trees. The forest is very dense and full of shrubs and trees with very thin branches and small leaves. The areas where Furcifer rhinoceratus prefers to live are extremely densely overgrown with climbing plants. The following photos show parts of the habitat of the species in Ankarafantsika during the rainy and the dry season.

Below you will find some 360° pictures from Ankarafantsika taken during the rainy season. With the mouse, you can rotate in all directions. If you click on the Theta logo, the pictures will open in an enlarged view in a separate window. There is also the possibility to execute the pictures in full-screen mode. Have fun looking at them!