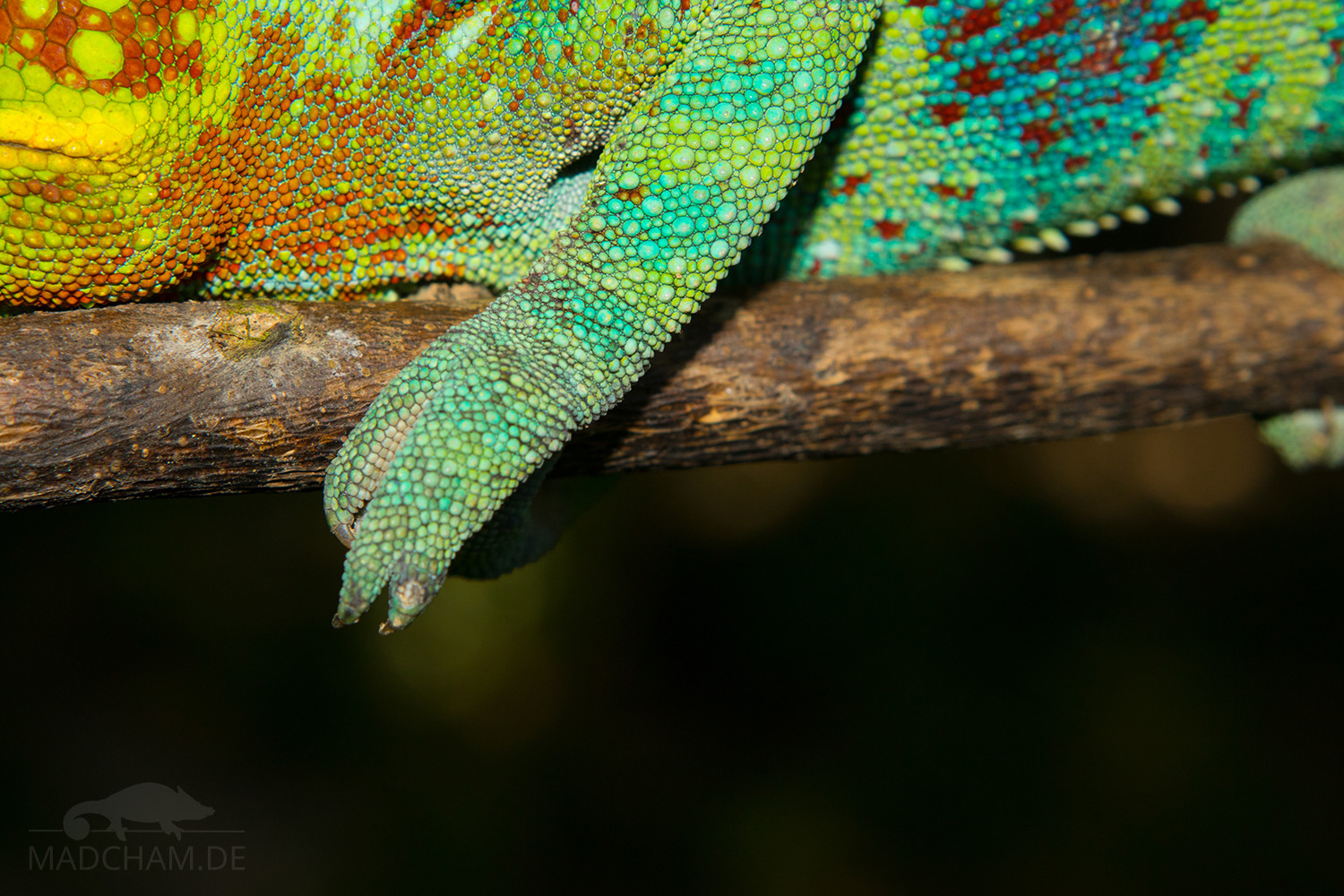 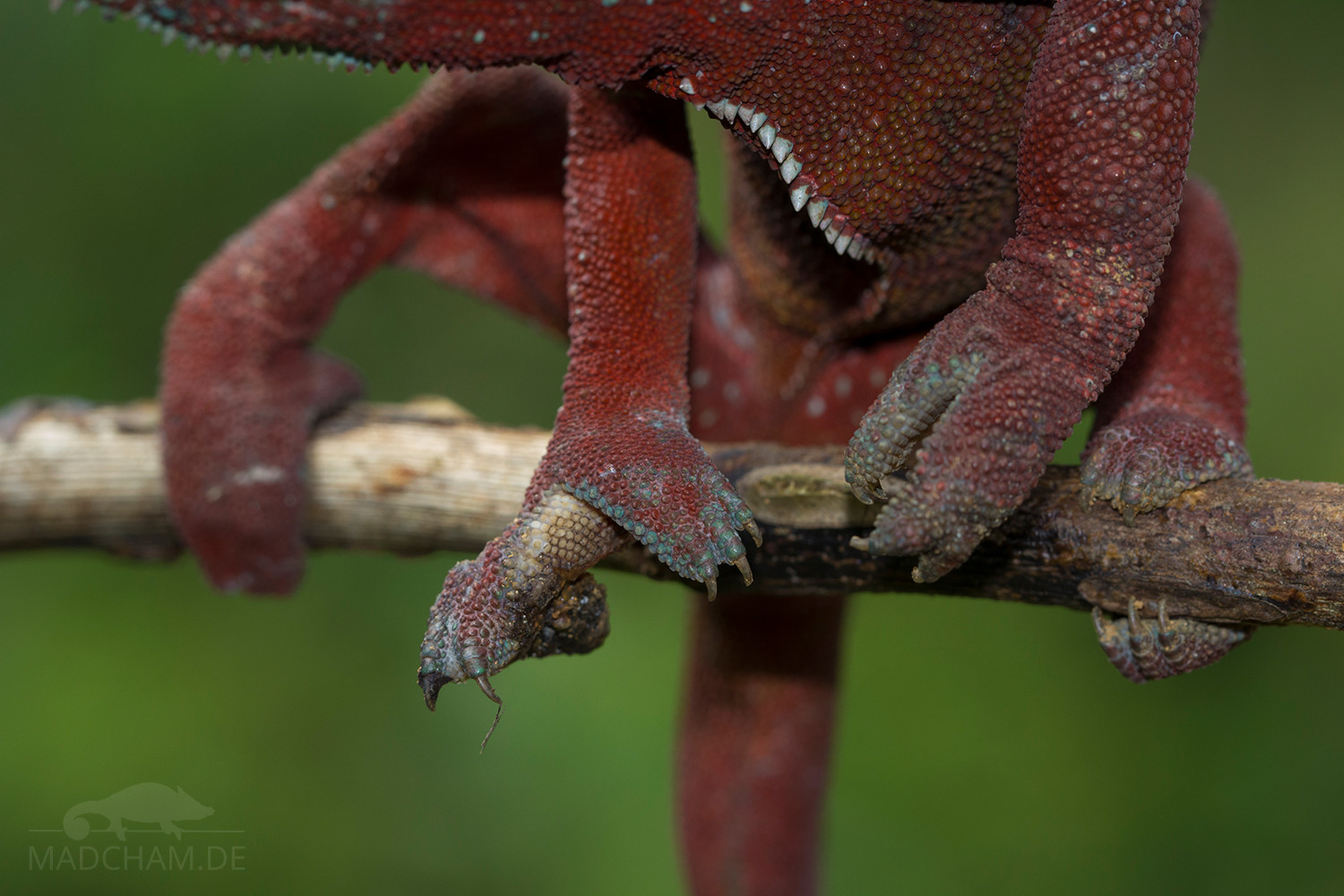 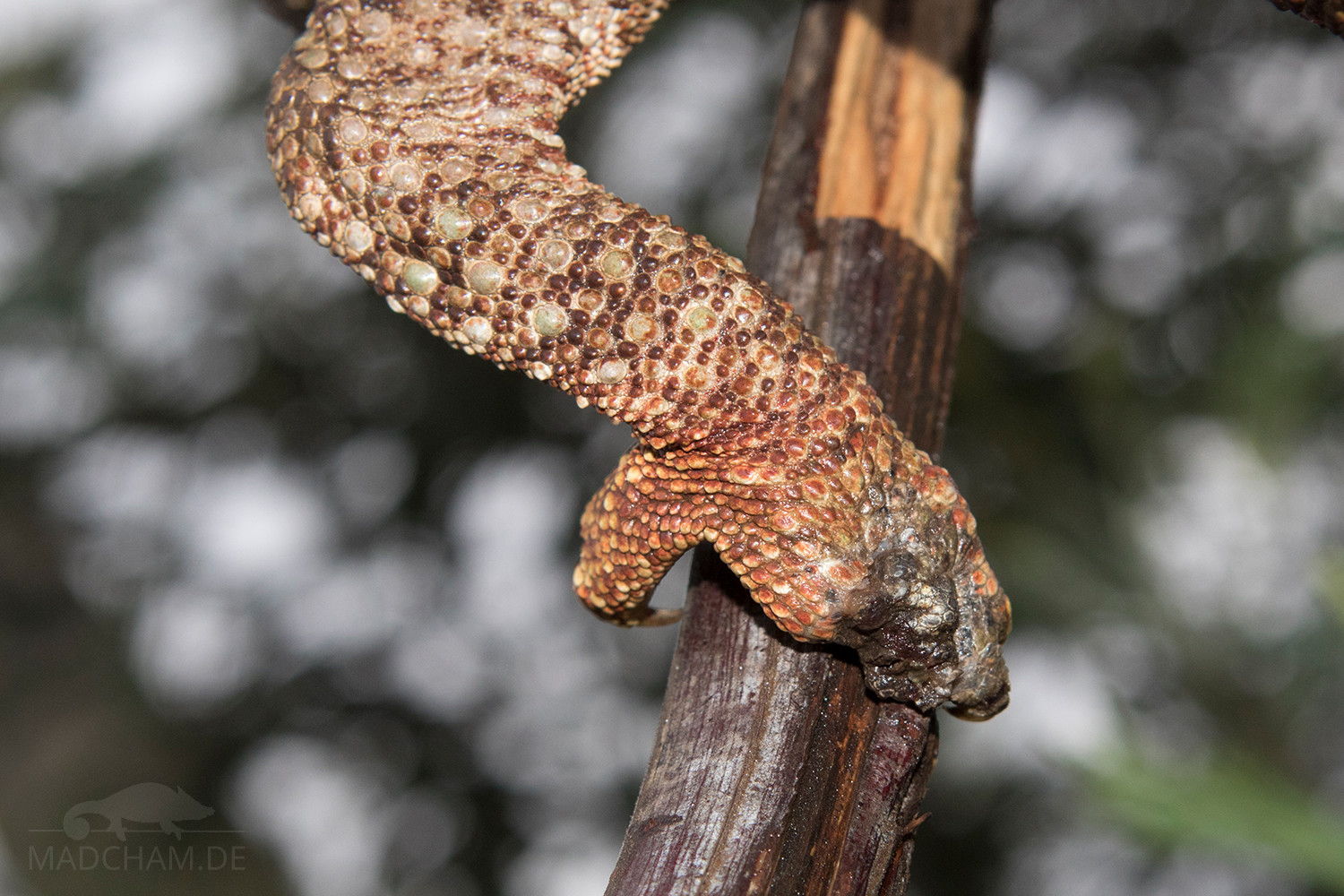 Pododermatitis – what is it?

Pododermatitis is the medicinal term for the inflammation of the skin, actually on the feet. In chameleons and many other animals, however, it also refers to skin diseases of the hands.

There are several ways in which a chameleon can contract pododermatitis.

Overweight and thus a strongly increased pressure on hands and feet plays an important role in many species. Chameleons in captivity – like most reptiles – are often unintentionally overfed. Unfortunately, chameleons are hardly or very late recognized to be overweight. Our weight tables – to be found under Chameleons & Habitat Data on the respective species pages – give an initial overview of the weights that occur in relation to the size of chameleons in Madagascar. In terraristics, these ratios are sometimes massively exceeded. Especially very large growing species like Calumma parsonii parsonii are quickly fed very difficult because one wants to have a particularly stately and “presentable” animal. Unfortunately, fast growth and overweight are factors that predestine big species for pododermatitis. However, the disease also occurs in medium-sized chameleons such as Furcifer pardalis. 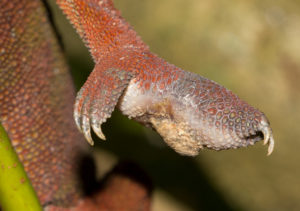 Restricted movement is another factor that can worsen pododermatitis. In cages, the range of movement is per se more restricted by the chameleon’s limited habitat than in the wild. In addition, chameleons are often fed from cups or directly from the hand, so that the animal hardly has to move for its food. In combination with overweight, too little exercise is, therefore, unfortunately, a major factor in the development of hand and foot infections.

Strong wetness in the terrarium – especially at night, when the chameleon does not move because it sleeps – can favor existing pododermatitis in chameleons.

Occasionally Pododermatitises develop by unsuitable branches or other unsuitable cage equipment in general, at which the chameleon can hurt itself the skin. Thin wires of outside aviaries, for example, can cut into the skin during climbing and cause small wounds, which then become the entrance for bacteria.

In less frequent cases, incorrect weight-bearing of a hand or foot, for example after amputation of a limb, leads to pododermatitis in the chameleon on the hand or foot of the opposite side.

Symptoms – What are signs of pododermatitis? 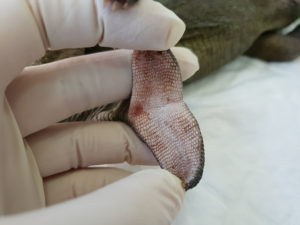 Pododermatitis in chameleons usually has a very slow, creeping course and begins with redness of the hand and foot skin of the affected animal. If these signs are ignored or simply overlooked by the owner, the skin deteriorates without the causes being eliminated and eventually becomes inflamed with pain and swelling. Chameleons (like humans) carry a lot of bacteria and fungal spores on their skin. These cannot harm an intact skin barrier, but they can harm already inflamed skin. The secondary infection of the skin causes purulent wounds, which can quickly spread to the bone through the thin skin of chameleons. The pus can become visible as crumbly, yellowish masses under the hands and feet and cause abscesses at the finger and toe joints. Sometimes necroses also develop blackish discolored, dead skin areas. Often it is only in this state that holders discover the problems of their chameleon’s palms and soles.

The inflammations of the hands and feet are very painful but are only “shown” by chameleons in an advanced state. Affected animals, similar to gout, sometimes relieve the limbs by letting their arms and legs dangle from their branches and lying on their bellies on branches. However, the fact that chameleons seem to climb and walk “normally” does not mean that the palms of their hands and soles of their feet are healthy. Chameleons hide symptoms for a very long time – even when they are in severe pain.

Pododermatitis can only be treated successfully if the keeper visits a veterinarian who is familiar with reptiles reptilian at an early stage and if the possible causes are eliminated at the first pressure points.

X-ray image of arm and hand of a chameleon

Hands and feet are thoroughly examined by the veterinarian. The wounds are cleaned, disinfected, and treated. Swabs for microbiology and resistance tests are taken from infected wounds. In advanced cases, X-ray examinations of the limbs may be necessary. A veterinarian with reptilian knowledge can apply special bandages to reduce the burden on particularly inflamed skin areas and thus accelerate healing. Bandages on the palms of the hands and feet are usually well-tolerated by chameleons. They should not be “handcrafted” by the holder himself. An improperly applied bandage can cause additional pressure points and the formation of further wounds, which can negatively affect the healing process. It is also advisable not to apply ointments without prior diagnostics.
In the following weeks, regular veterinary care of the affected limbs is part of the therapy.

In many cases, early diagnosed pododermatitis can be well treated, as long as the causes are found and eliminated as far as possible. Reducing overweight in chameleons is often a difficult and slow goal. More exercise, a dry terrarium overnight, and soft, smooth branches can contribute to the early healing of pododermatitis.

If hands and feet are already heavily festered or bones are already affected, the prognosis is much worse. In very severe cases, especially with advanced abscessing, it may even be necessary to amputate fingers or toes. In the best case, you don’t let it get that far and regularly check the palms and soles of your hands for changes.