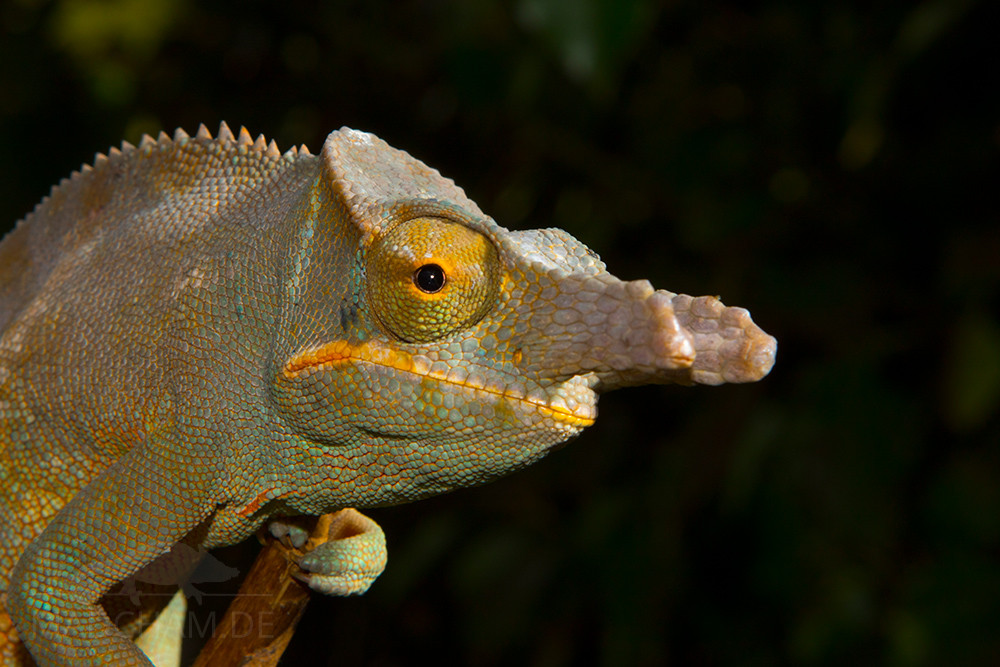 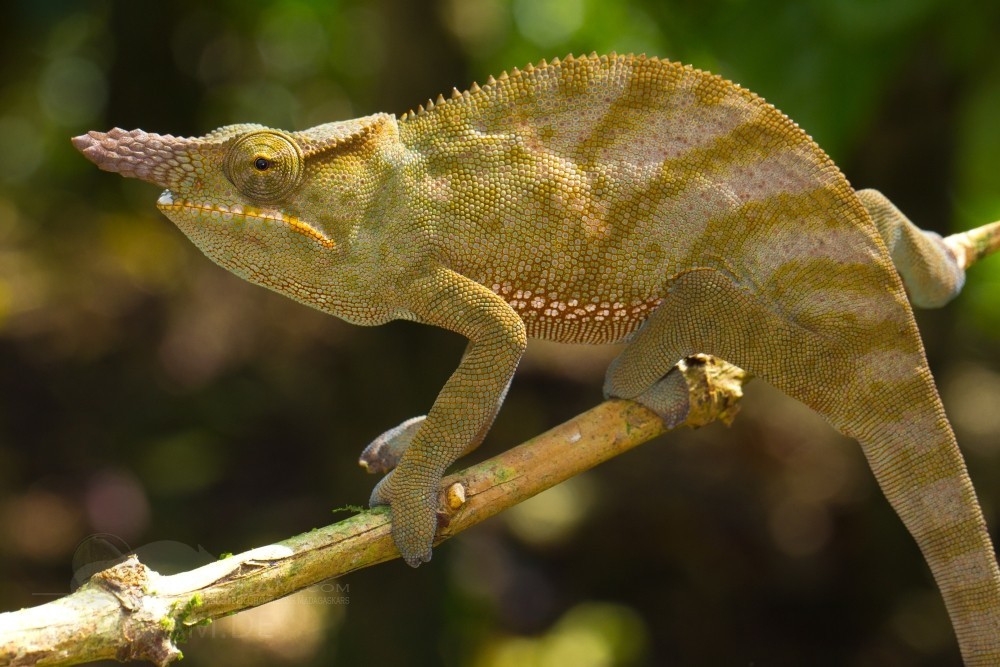 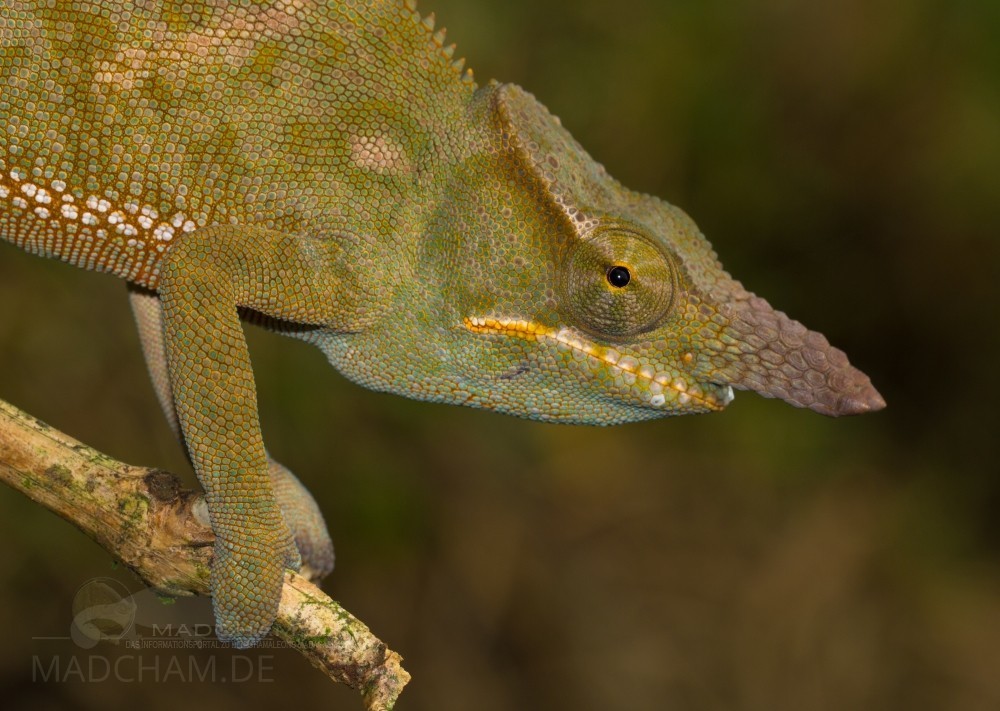 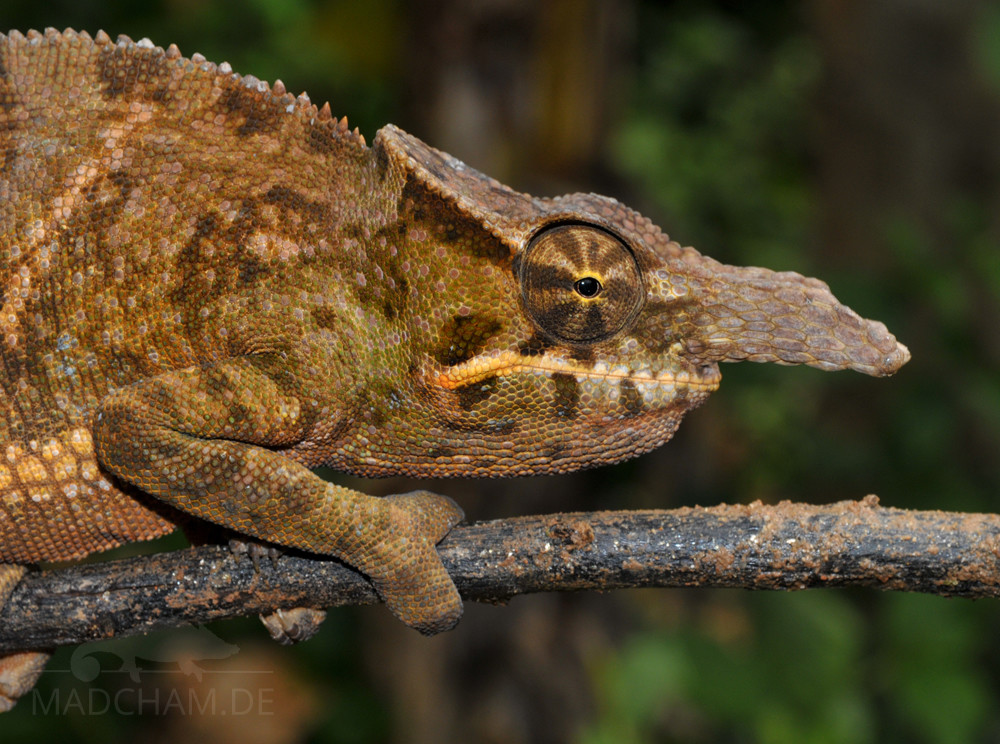 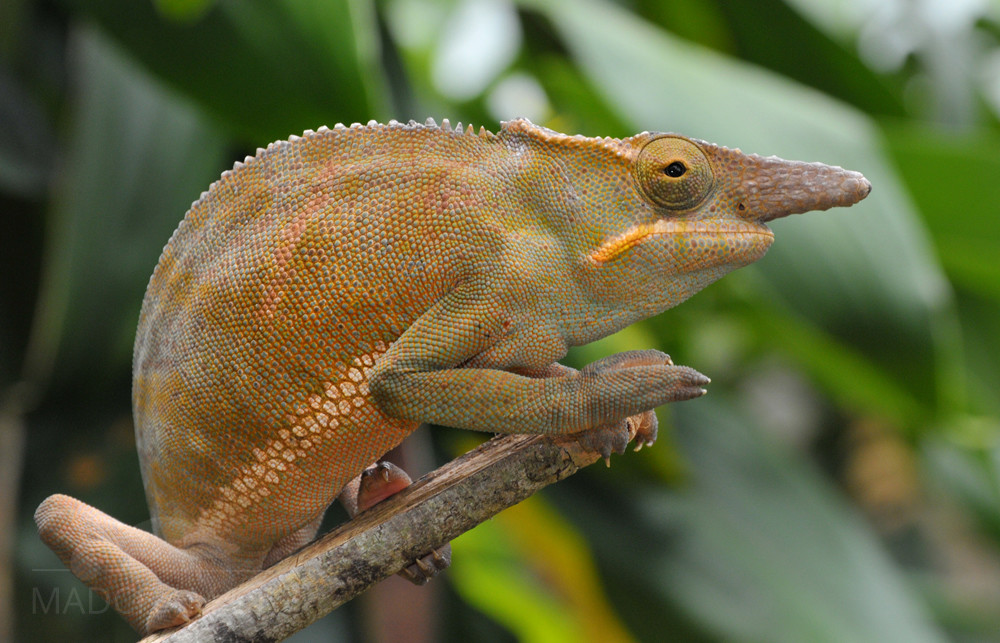 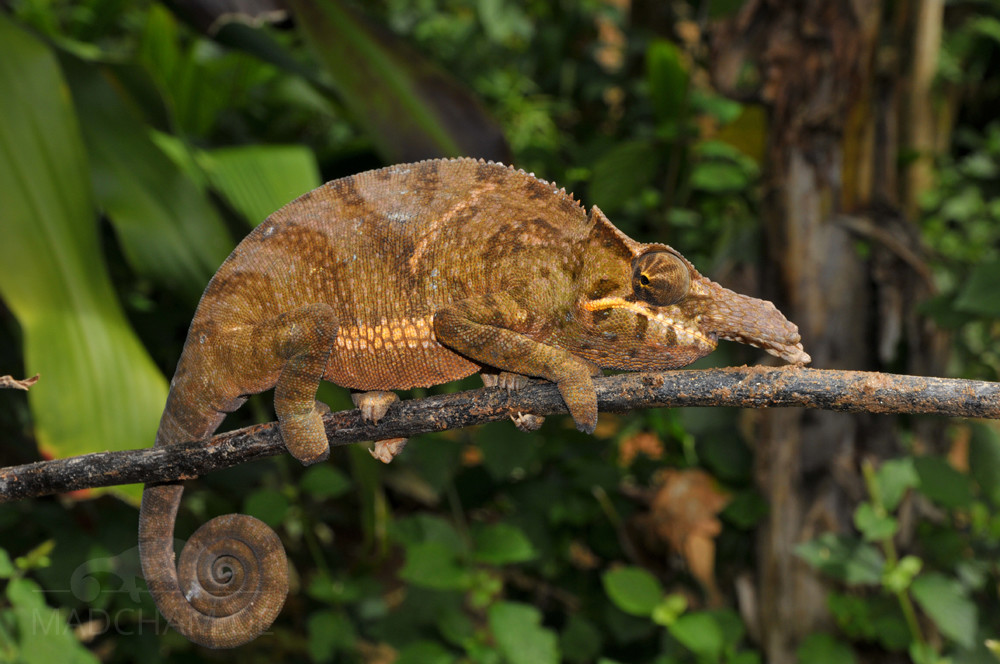 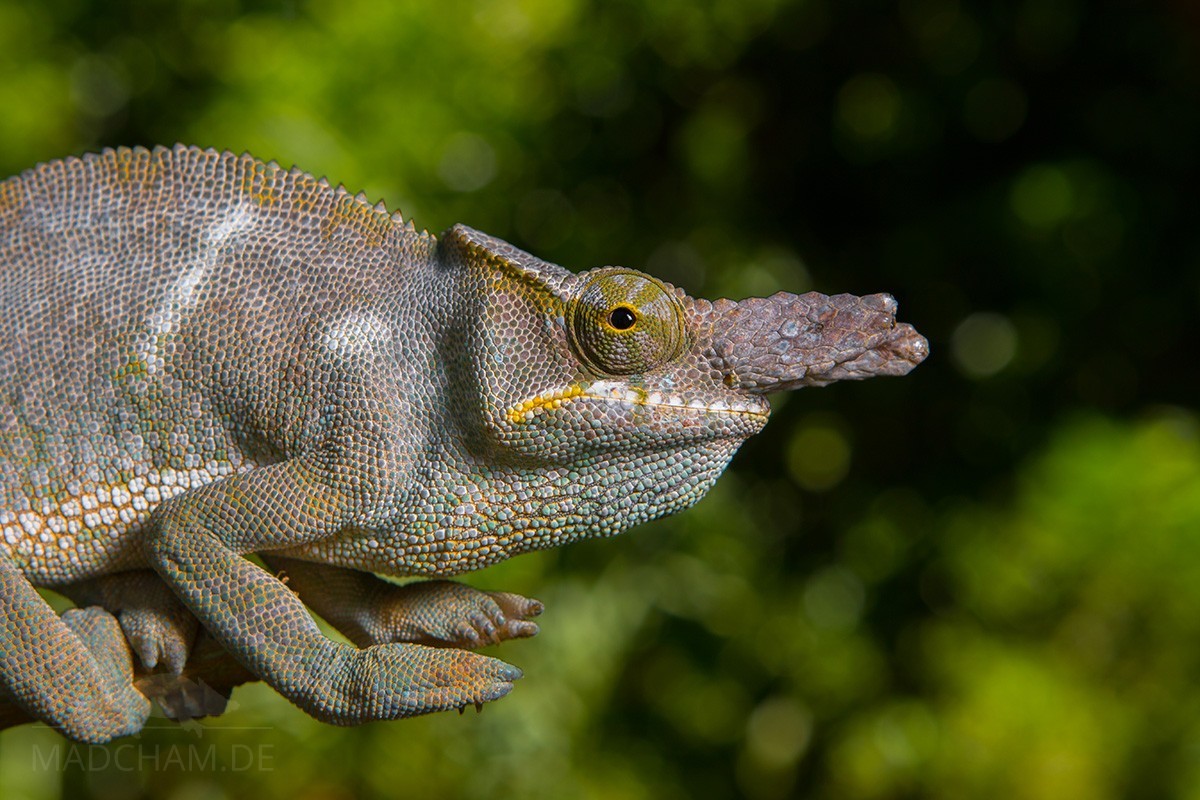 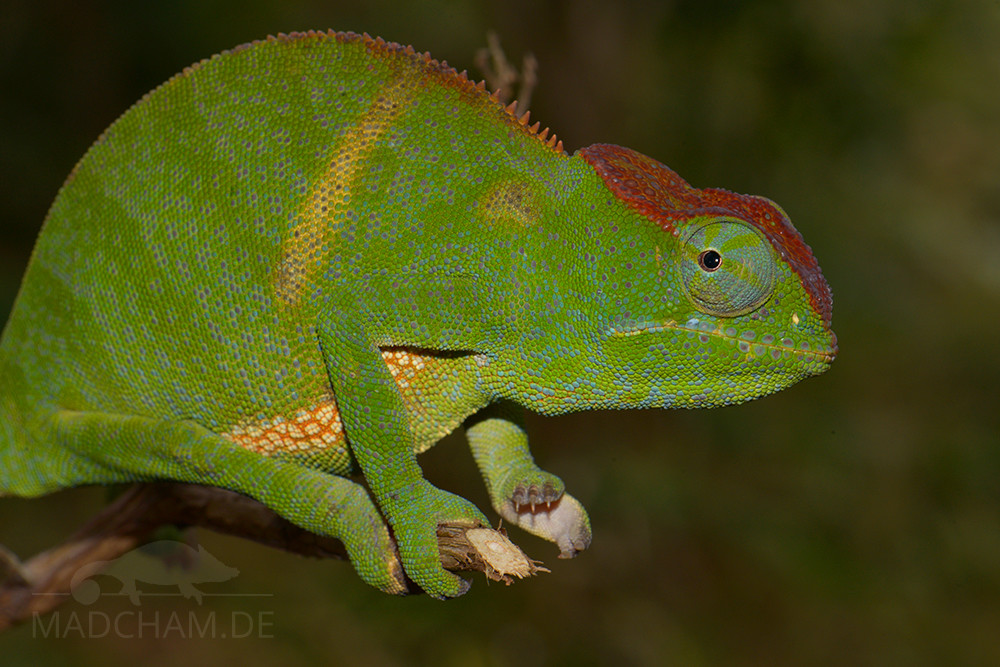 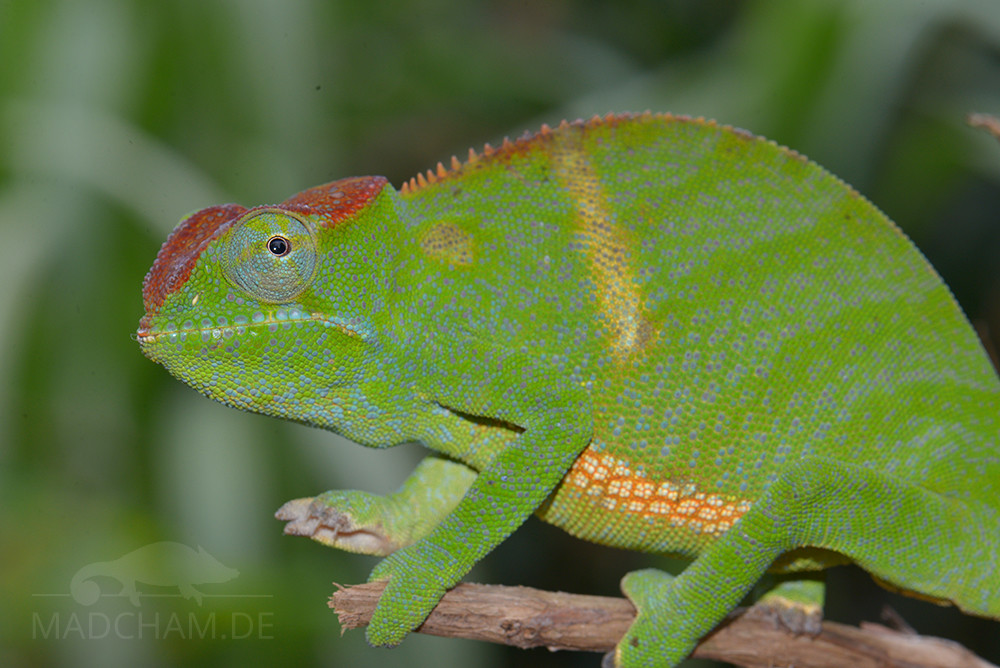 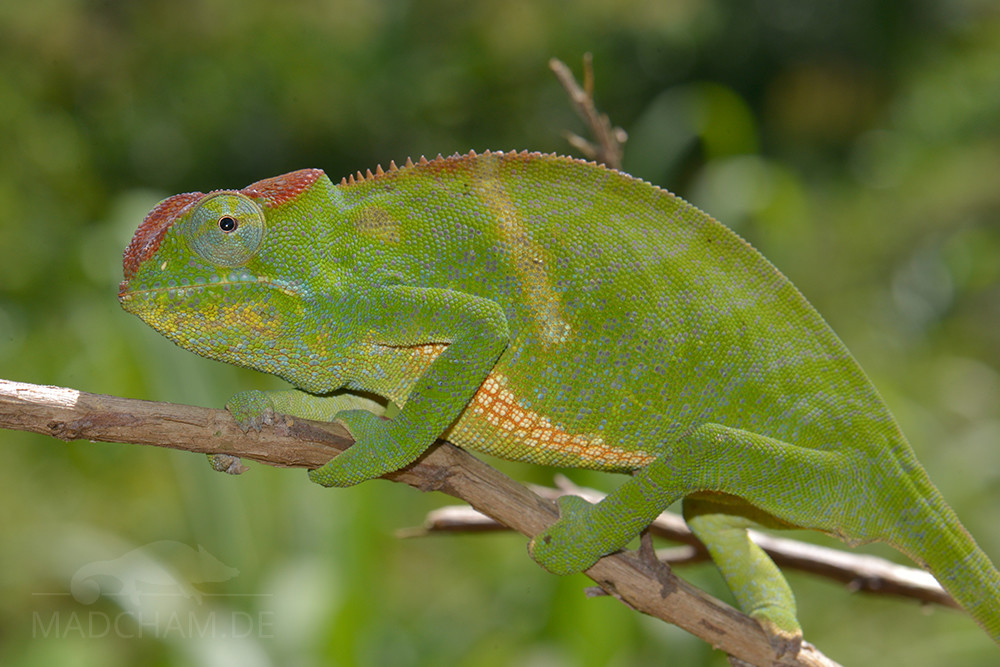 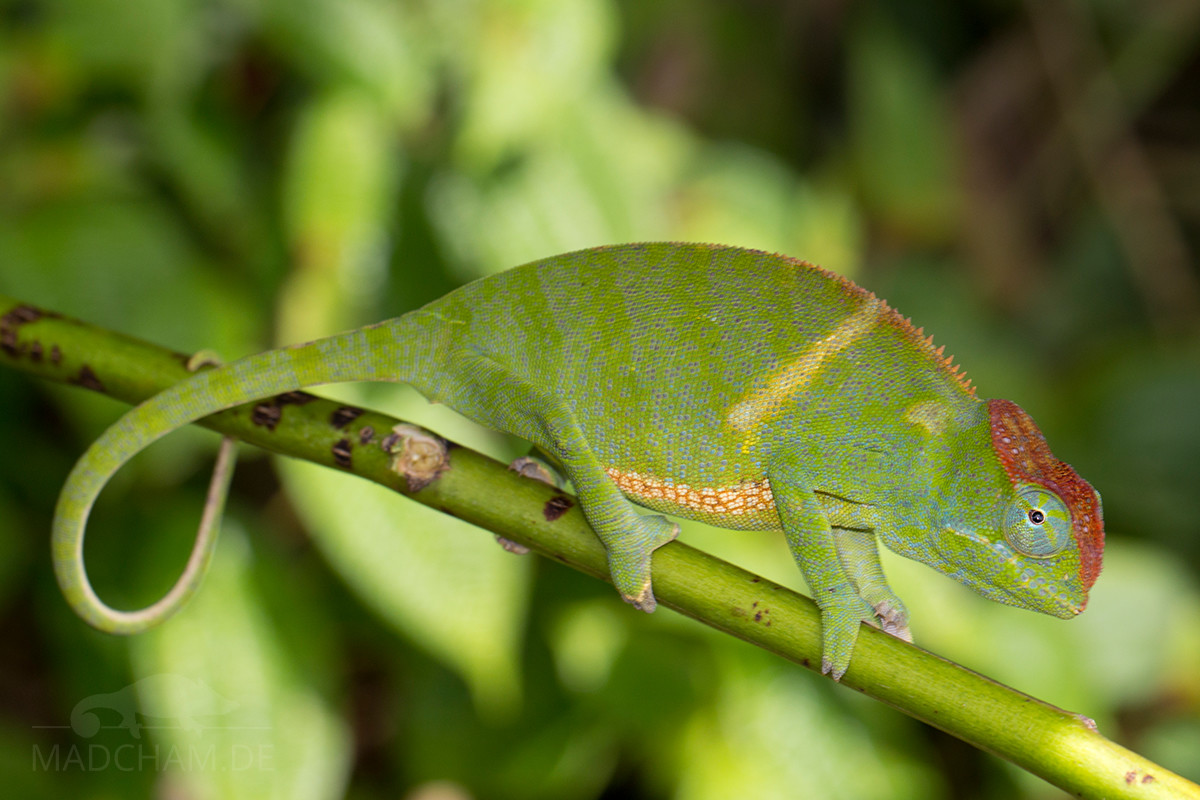 The French zoologist and geologist Alexandre Brongniart taught about mineralogy at the Natural History Museum in Paris (France), but was also interested in reptiles and amphibians. In 1800 he described the species Furcifer bifidus on the basis of chameleon preparations available in the museum. He borrowed the species name from the Latin bifidum, which means “divided in two” and alludes to the male’s nasal process.

Furcifer bifidus lives in the rainforest along the east coast of Madagascar, at heights of approximately 1000 meters above sea level. The distribution area extends from Andasibe eastwards to Toamasina (Tamatave) and into the northern direction via Fenoarivo until Marojejy national park. A single found specimen in 2006 implies that the species could also occur in a humid region near the otherwise dust-dry Daraina, northeast of Vohémar. Until now, we found this species only in the area around Andasibe-Mantadia national park and occasionally around Vohimana as well as close to Mahambo on the east coast. There they have settled in secondary vegetation and coffee plantations in hilly sites. Further north, we have not seen Furcifer bifidus yet. Due to increasing slash-and-burn agriculture along the east coast, Furcifer bifidus is one of many chameleon species with very fragmented populations in small residual forests.

With up to 42 cm total length in males and 30 cm in females, Furcifer bifidus belongs to the middle-sized chameleons of Madagascar. Both genders wear a low helmet, white or yellow lips, very homogenous scalation, and a white band along the body sides that has larger scales. When fired up, some specimens show an orange throat sac. The females are the prettier individuals in Furcifer bifidus, showing amazing colors. Usually, they are bright green with yellow bands, the top of the head is bright red with small blue dots. Gravid Furcifer bifidus wear bright blue dots spread over the whole body. In contrast, the males of this species are not very colorful with greyish, yellowish and green colors and dark bands, but have two distinct parallel nose appendages. In some individuals, these grow a little curved down. They have a dorsal ridge, but it is only visible in the area of the shoulders and disappears further back.

The following pictures show parts of the habitat of Furcifer bifidus in the region around Andasibe. Some are right from finding places of the species. The rainforests of this area mainly consist of young slender trees. Furcifer bifidus does not only inhabit the rainforests but also lives in secondary vegetation at the edges of the rainforest, in tamarind trees and other trees with widely protruding crowns. They prefer to roam around high up between the branches.