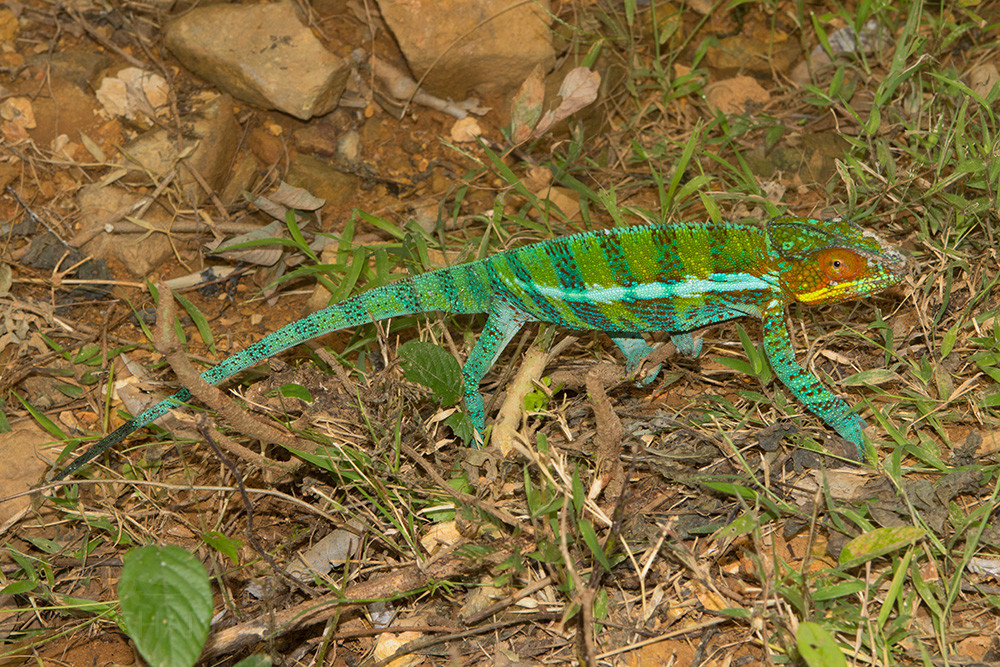 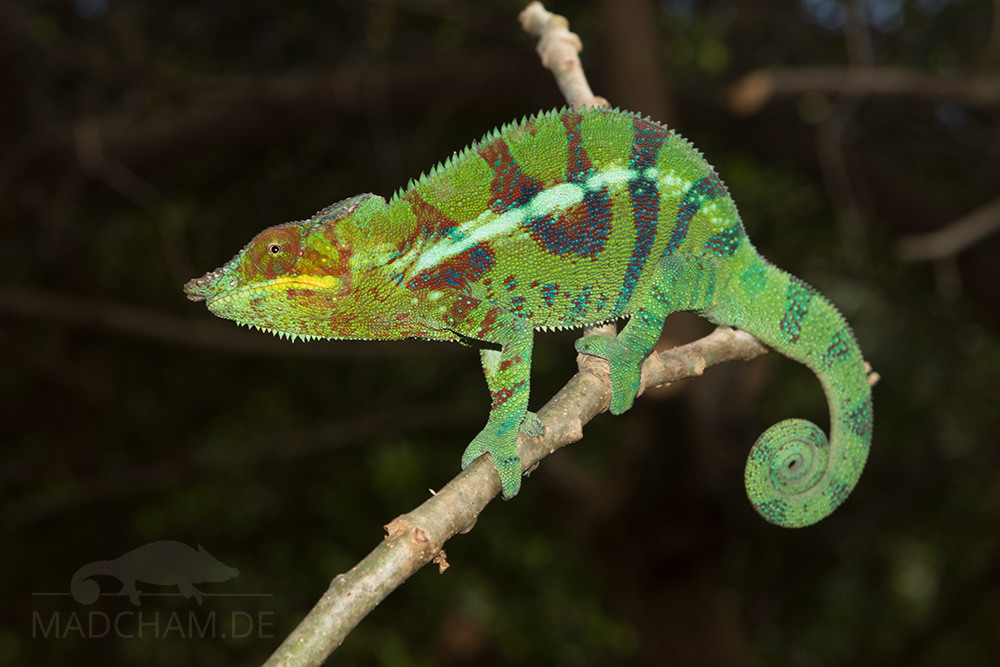 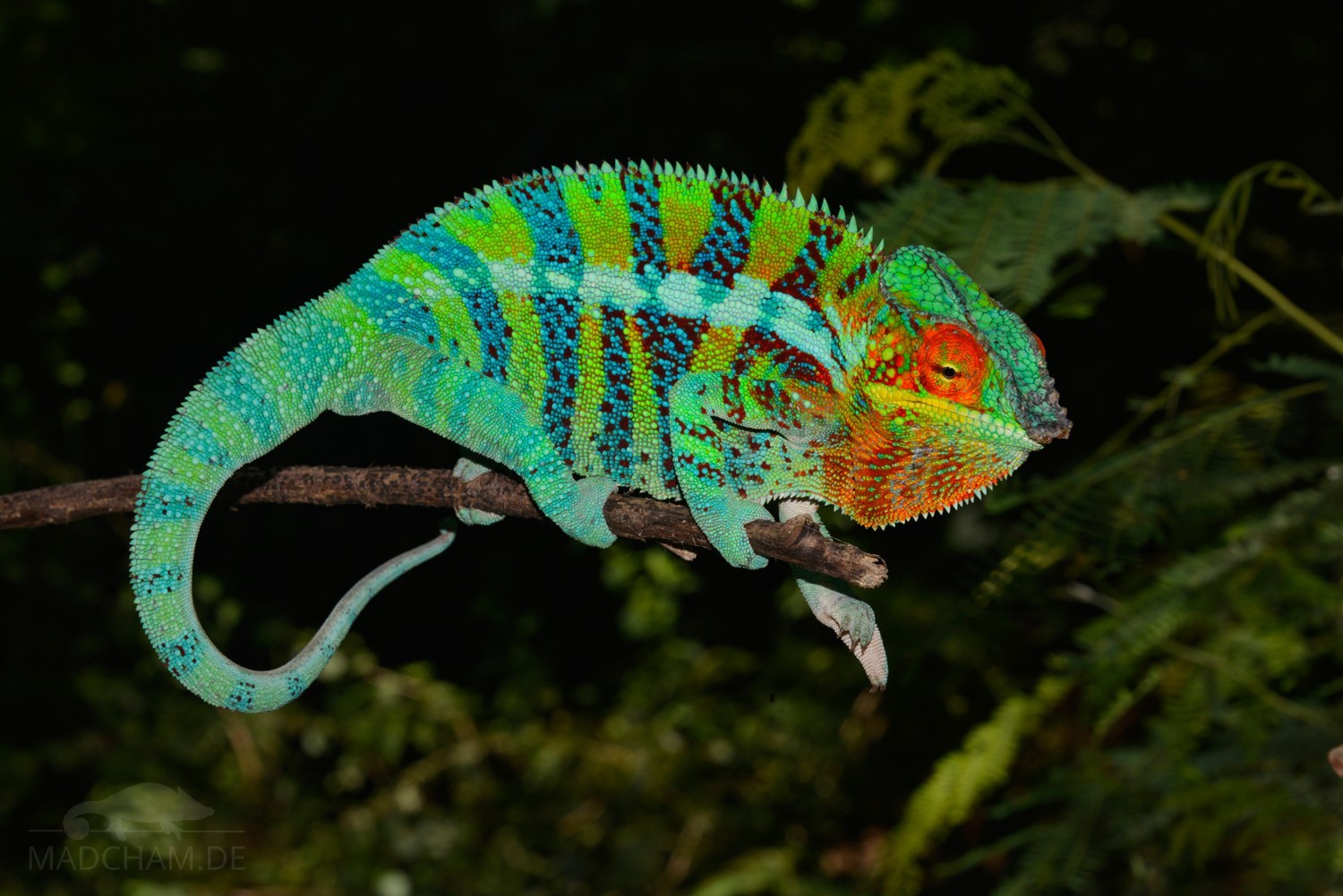 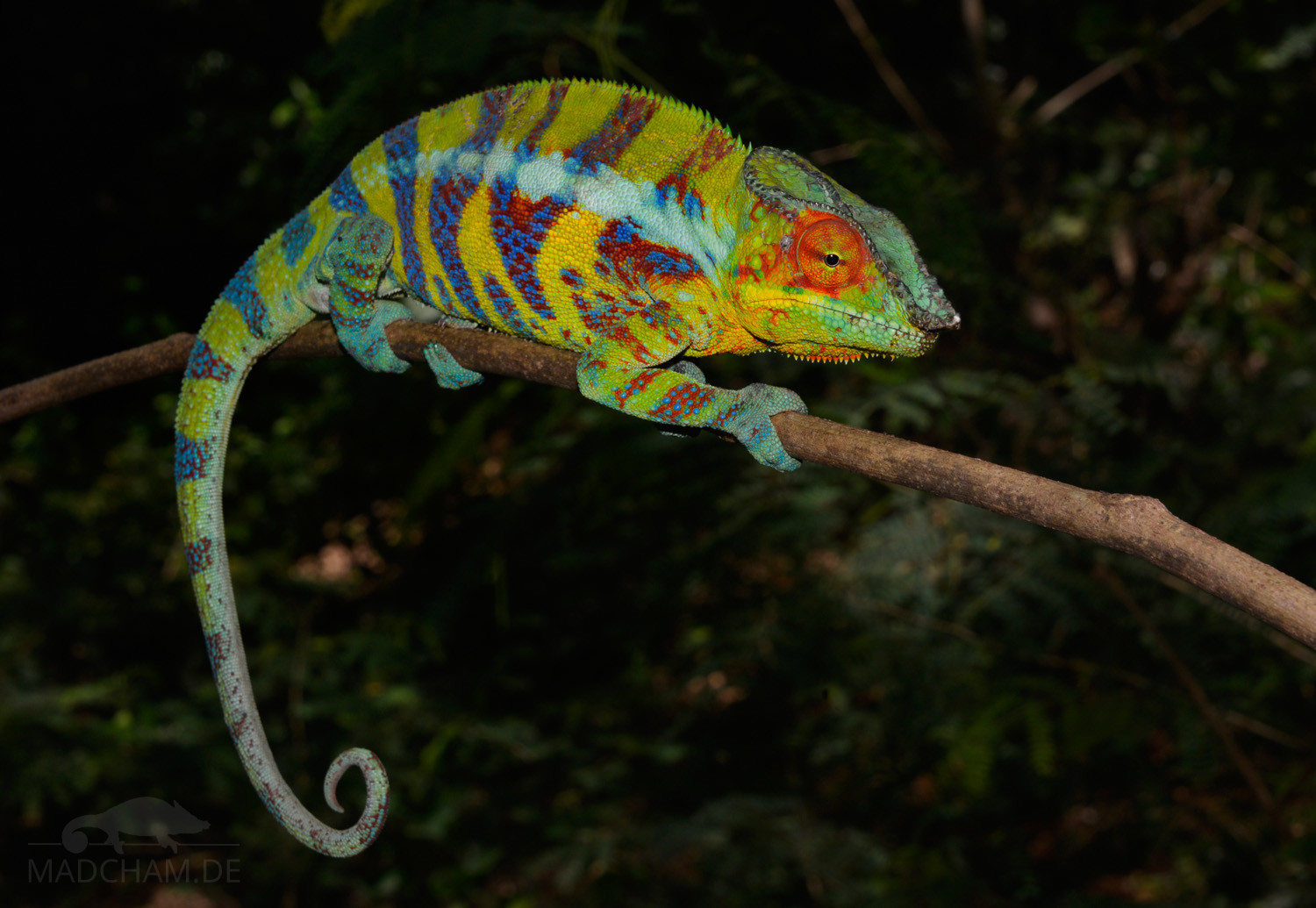 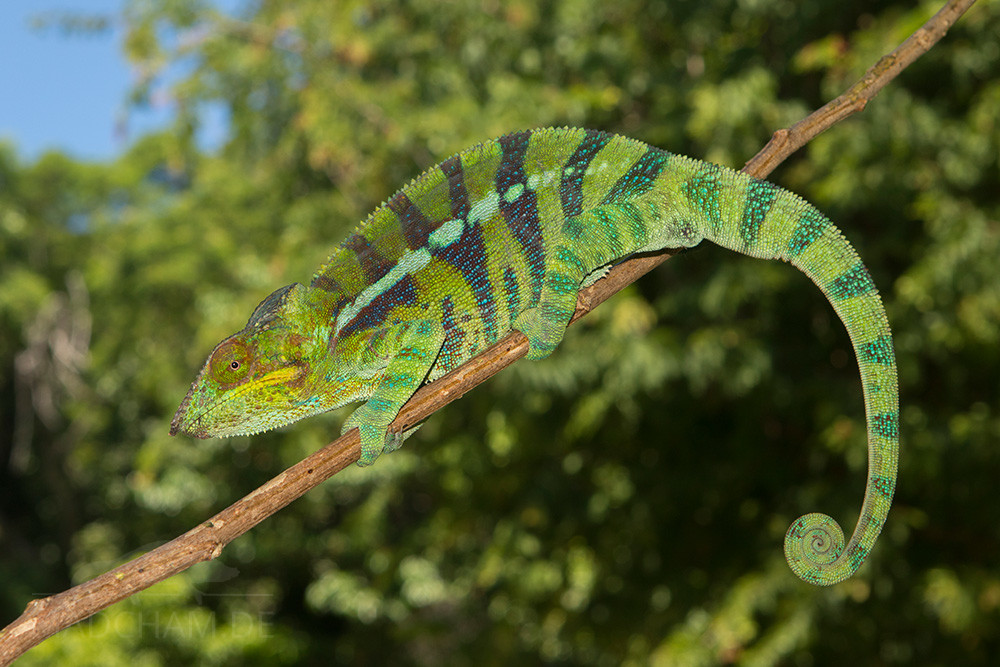 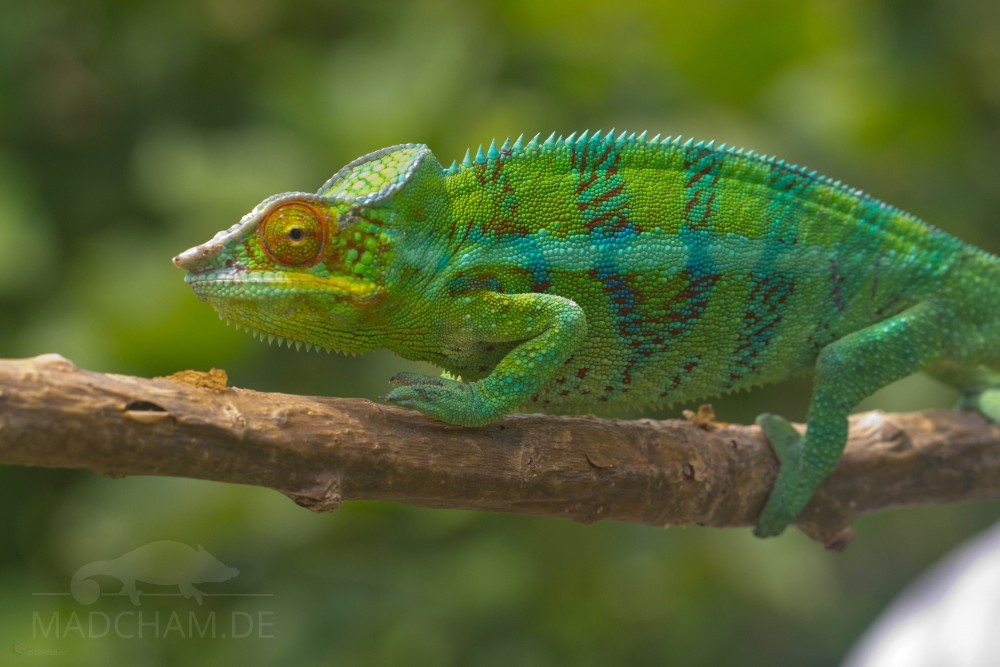 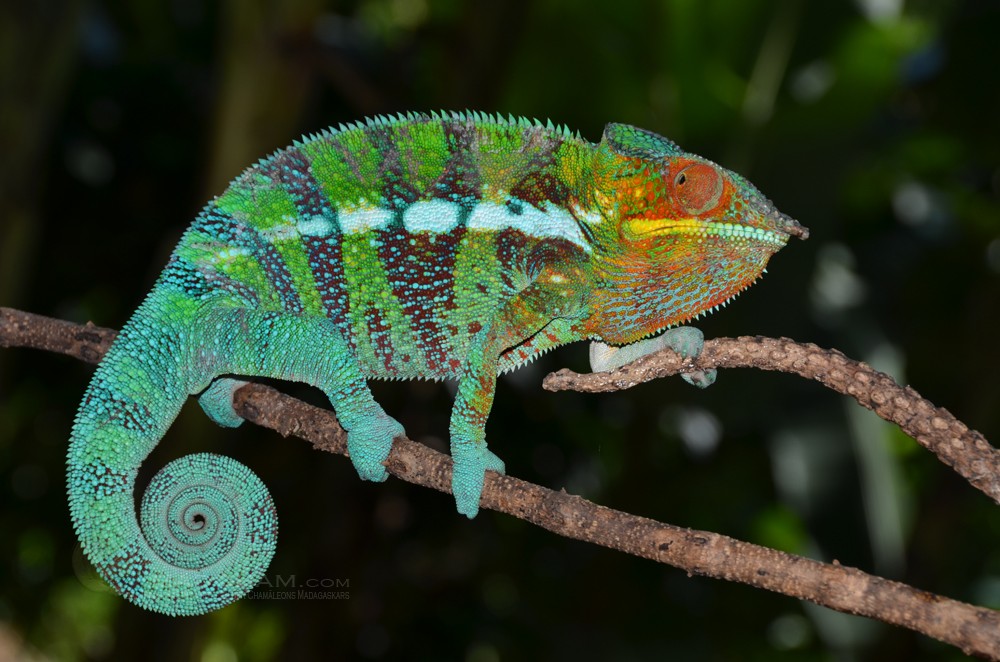 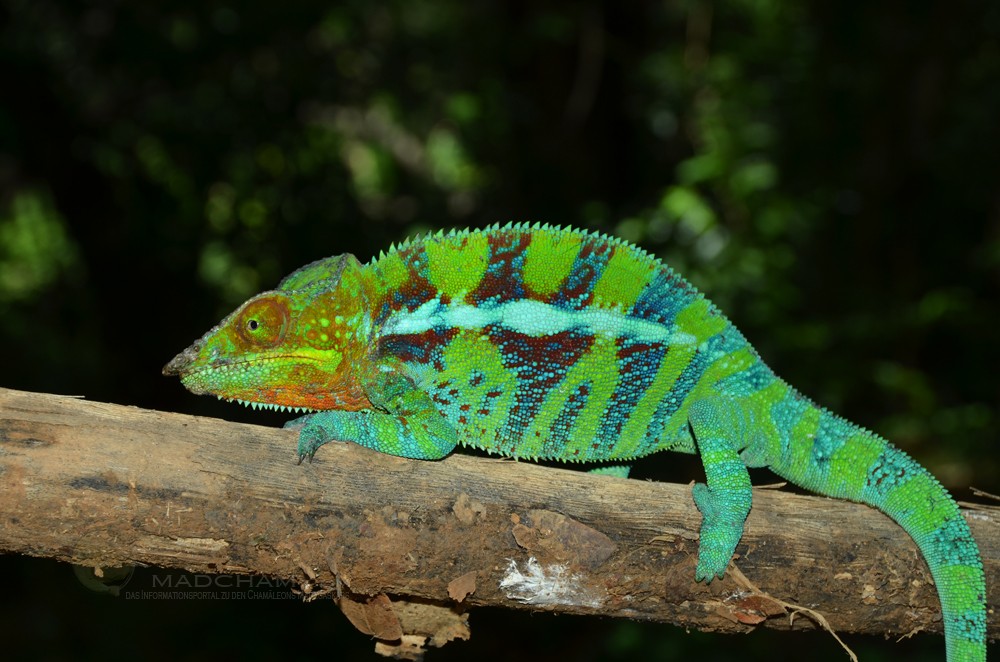 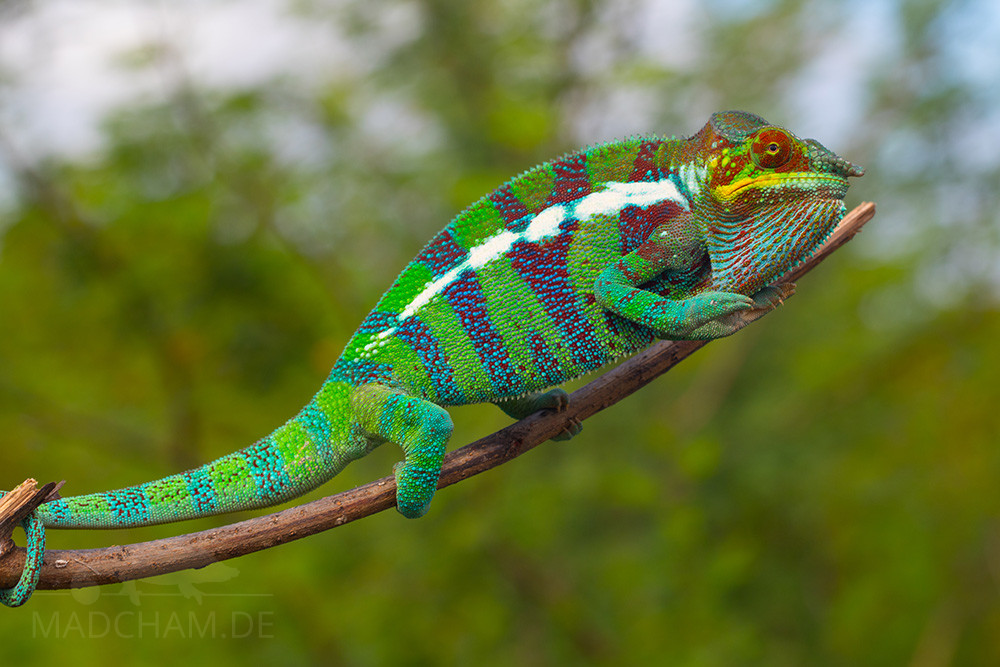 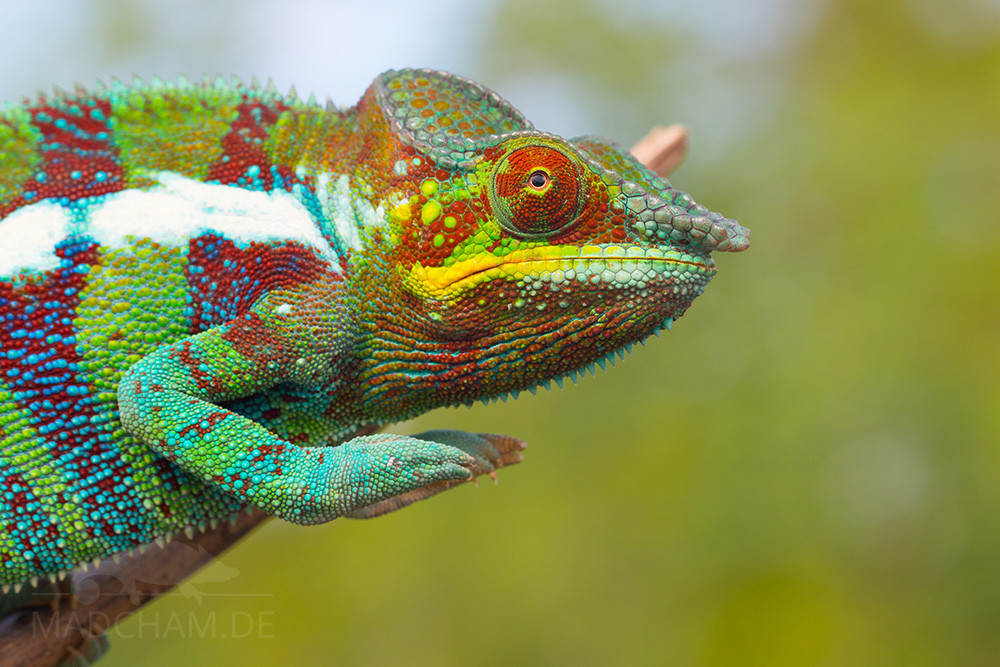 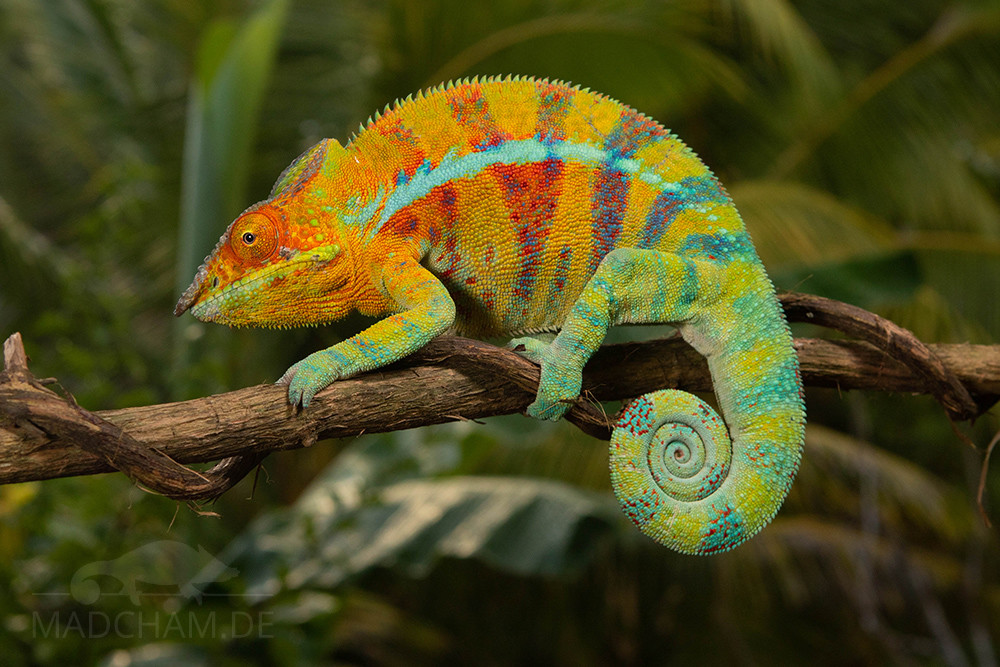 Ankify is a small coastal village in northwest Madagascar, consisting of some hotels and huts directly at the beach. From the harbor (Doany), you can drive by boat to the islands Nosy Be, Nosy Komba, Nosy Faly, and others. Onshore, Ankify is separated from the next local form, Ambanja, by a range of hills and a kilometers broad mangrove belt.

The male panther chameleons occurring in Ankify have green-turquoise colors with mainly blue stripes and orange-colored eyes with a yellow corner of the mouth. We have found several times extraordinary huge males. They can be found along the gravel pathway at the coast everywhere in the secondary vegetation.

Since 2015, we have been measuring the weights of chameleons found by us on Madagascar, as far as the animals (and our scales) are involved. Up to now, there are only a few weights. In the long run, we hope to be able to read an average weight in relation to snout-vent-length (measured from the tip of the nose to the cloaca) for each species from as many measurements as possible. It is important to know that all weights were measured towards the end of the rainy season (= best food supply), so these should be maximum weights on Madagascar. Triangular symbols in females mean not pregnant, round symbols mean pregnant. In Furcifer pardalis, contrary to our original assumption, it has so far turned out that there are no serious differences in the ratio of SVL to weight between the individual local forms.

The given data were measured and compiled by us within several years with thermo- and hygrometers directly at the finding places of the animals. "Average temperature" means that the values of an entire month were calculated to an average value, e.g. all measured minimum values of February were calculated to an average minimum value for February. This means in plain language that individual peak values of a day can be significantly higher or lower than the average minimum and maximum values. It is therefore possible that although the average maximum is 29 degrees, it was 33°C or even 35°C warm on some days of the month. 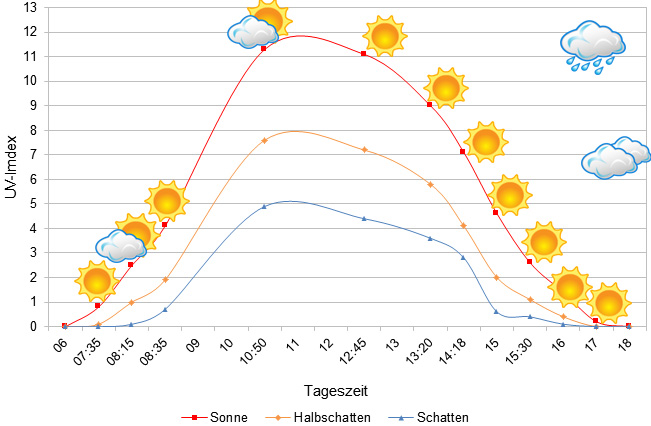 Unfortunately there are no ground temperatures available for Ankify yet.

The animals can be found everywhere close to the gravel path along the coast in secondary vegetation. Between huge old mango trees, Ravenalas, palms, and bushes you can find panther chameleons also along rudimentary fences made of branches. Additionally, Ankify has some smaller coffee and Ylang-Ylang plantations on some hills, where you can also meet a panther chameleon from time to time. Most coffee trees are overgrown with pepper vines to get two harvests in one plantation. For panther chameleons in Ankify, this is no problem, they take what they get there.

Hereinafter you can find some 360° pictures from Ankify. You can move inside these pictures via mouse click in all directions. If you click on the Theta logo, a new window with an enlarged view will open. You will also have the opportunity to look at the pictures in full-screen mode. Enjoy!