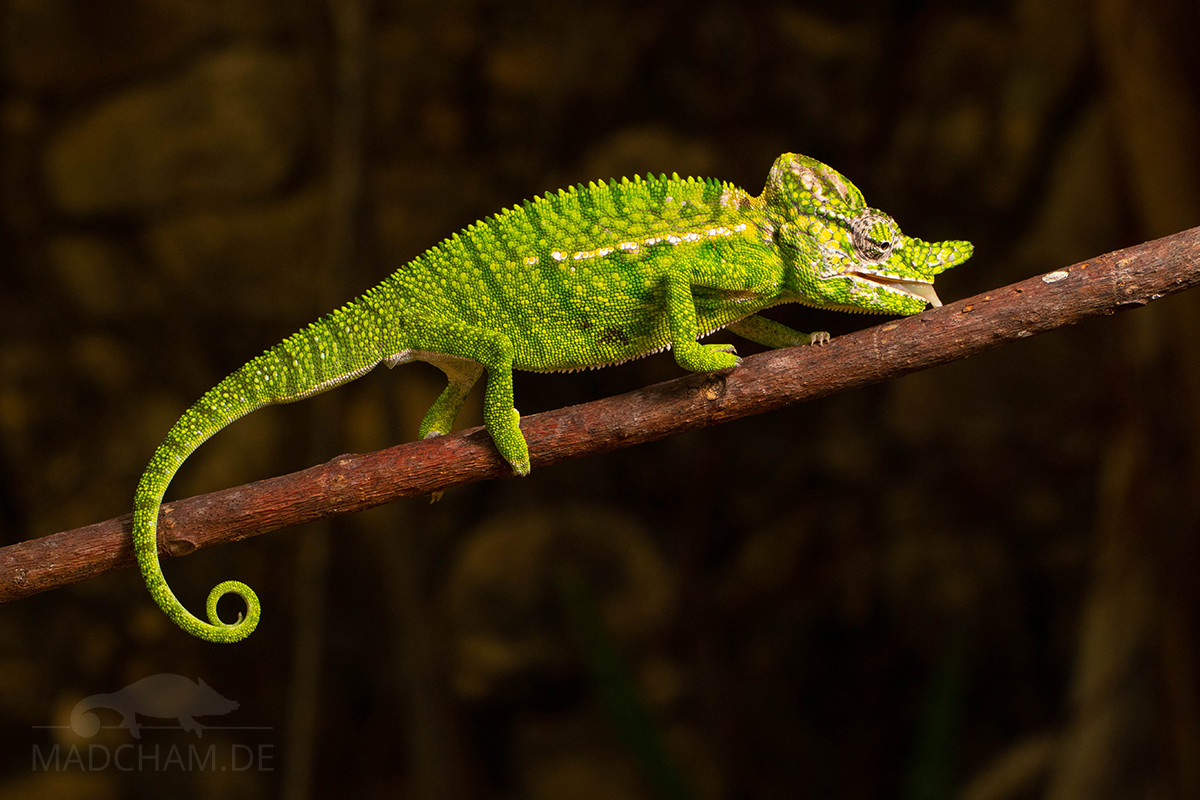 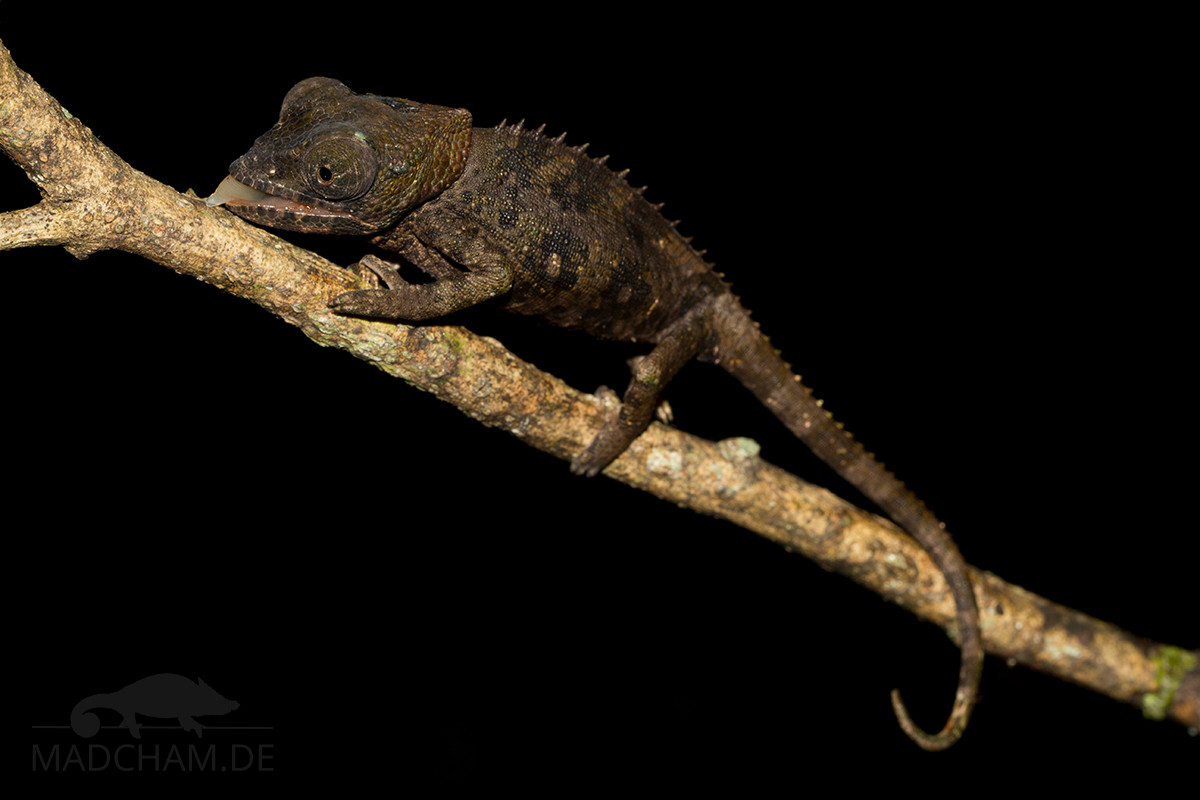 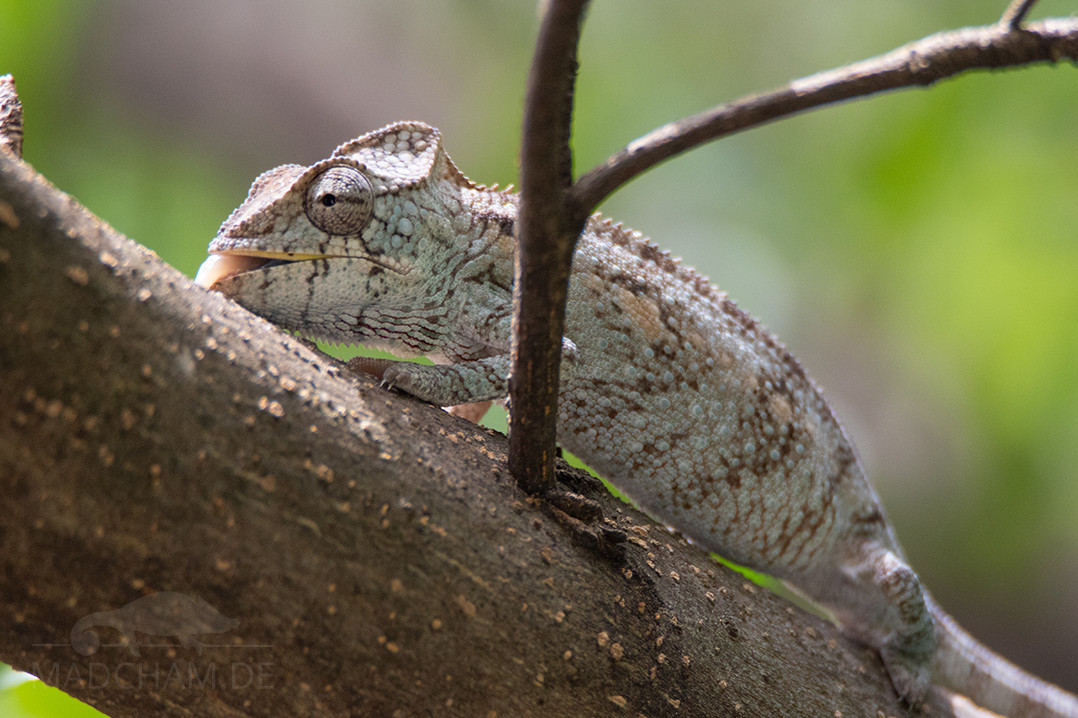 In Madagascar, you can observe it quite often: The so-called tongue test behavior. A chameleon walking at a leisurely pace shifts its tongue forward a little so that two small projections become visible under the tip of the tongue. With these, the animal then licks branches, leaves, or other surfaces with a nodding head movement. The behavior occurs across all genera and species. We could observe it in both leaf chameleons and tree-dwelling chameleons in Madagascar, in males and females, in young and adults. The behavior is particularly common when chameleons explore new environments. Some places are tested several times and especially careful with the tongue. If a chameleon moves quickly or is in the company of an opponent, the tongue test behavior does not occur.

It is assumed that the tongue tests are used for intra-species communication in chameleons. In non-Madagascan chameleons, it could be shown that they showed tongue testing behavior in places where conspecifics had previously rubbed their mouth corners. The mouth angles of many chameleon species carry so-called temporal glands, whose characteristics are not yet completely clarified. It is assumed that rubbing the glandular secretion on branches serves as a kind of marking. Whether this marking delimits “territories” or gives hints to the marking chameleon, for example, sex and mating readiness, is still unclear. Similarly, rubbing the cloaca on branches could serve such markings. 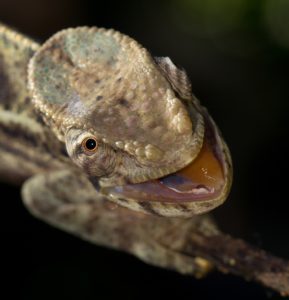 Tip of the tongue at Calumma ambreense

The mouth of chameleons contains the so-called Jacobson’s organ. It lies in the palate and has odor-sensitive epithelium. By “palpating” branches and leaves with the tongue, chameleons can present the ingested odor particles to the Jacobson’s organ better than if they just bent their head over them. However, Jacobson’s organ and therefore the sense of smell is rather weakly developed in chameleons in contrast to other reptiles. It could be, however, that the tongue test detects sex hormones (pheromones) – so the tongue test could help in finding a partner. A similar tongue testing behavior can be observed in spiny iguanas (Scleroporus jarrovii). It also occurs with them when exploring foreign places. It has been shown that the tongue testing behavior of spiny iguanas is mainly related to finding well-fed sexual partners. Similar behavior can be observed in chameleons in Madagascar: Males in particular often show tongue testing behavior on branches that have been walked over by an interesting female before.

That the tongue test behavior serves the finding of feeders, as was assumed many decades ago once, seems rather improbable. The eyes and tongue of chameleons are highly specialized in their existence as lurking hunters, but not as actively searching hunters.

At last, it would be possible that the tongue test behavior could serve as a warning against predators like snakes. Snakes move their whole body over branches, so they certainly leave olfactory traces. So far, however, no study has been able to prove a connection between tongue testing behavior in reptiles and the avoidance of potential predators.

In total, research on this topic is still almost completely lacking for chameleons.