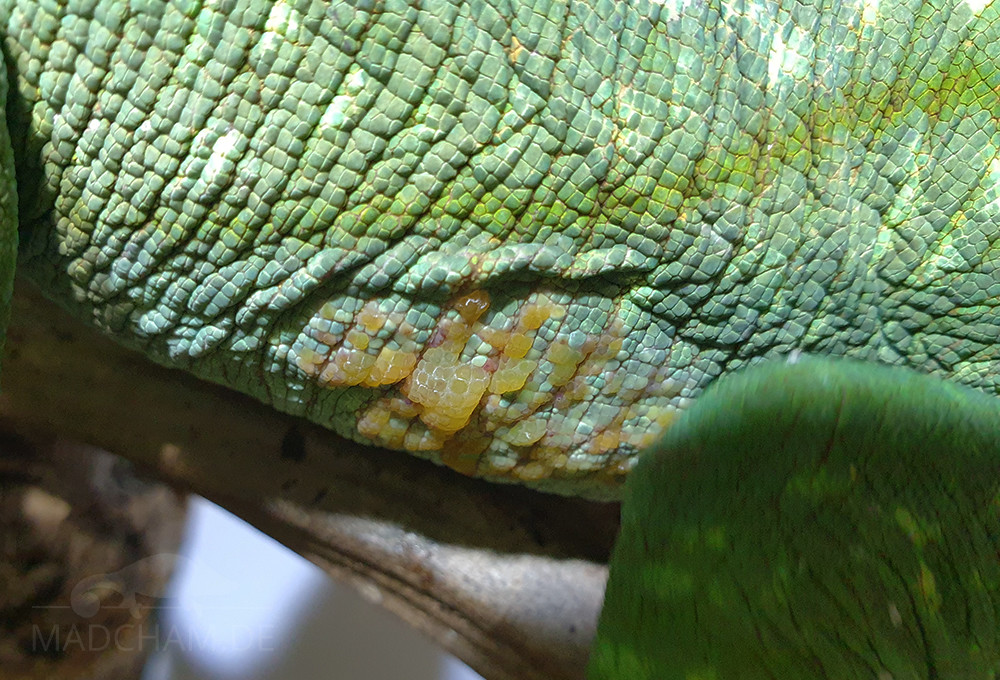 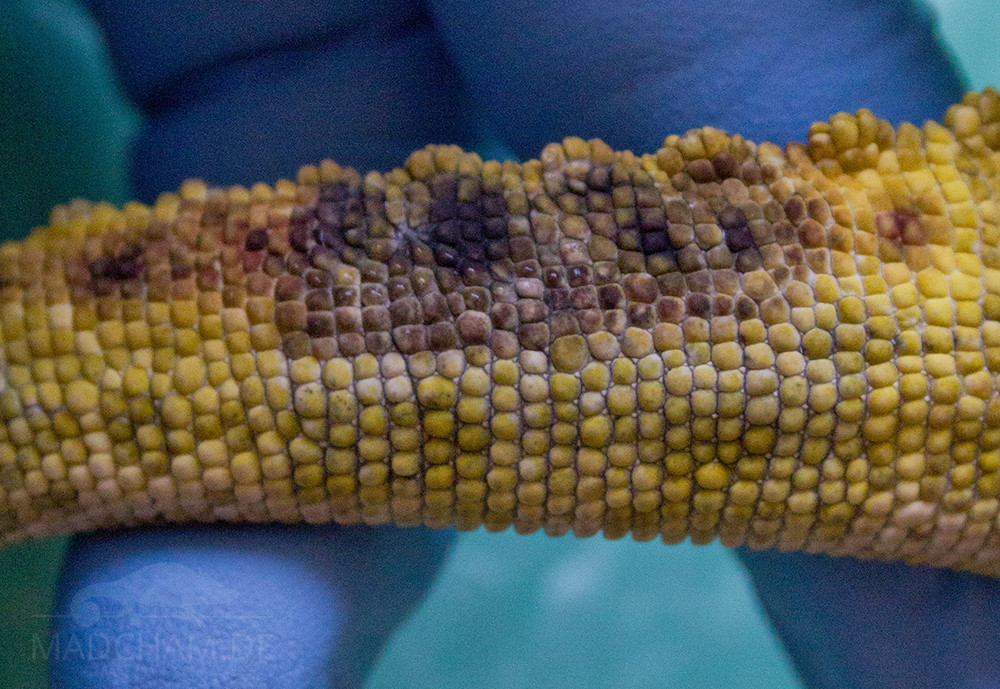 Mycosis – what is it?

Facultatively pathogenic fungal spores are always found in the environment and on the skin of the chameleon. They usually only become a problem when there is a disease or a weakened immune system that provides the fungus with favorable conditions for growth. Possible reasons are often suboptimal husbandry conditions such as pair or group husbandry of solitary animals, insufficient lighting of the terrarium, or too high humidity in combination with insufficient ventilation. Also, old burns or scars from previous injuries are often the starting point for fungal infections. In chameleons, infections by Aspergillus, Penicillium, Paecilomyces lilacinus, Phycomycetes, Mucor and Paecilomyces viridis have been seen so far. 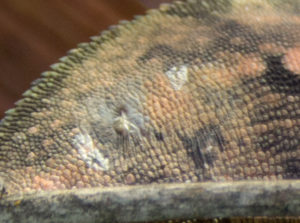 Dermatomycosis on an old scar in a female Furcifer pardalis

However, there are a few exceptions. The best known are a fungus which currently bears the name Chrysosporium anamorph of Nannizziopsis vriesii (abbreviation CANV), as well as Nannizziopsis dermatitidis and Metarhizium granulomatis (formerly Chamaeleomyces). In recent years, healthy chameleons have also been increasingly affected by these fungi. Studies indicate that these fungi are obligatory pathogenic, i.e. always sickening, for chameleons and other lizards. Nannizziopsis and Metarhizium are considered highly infectious. They are apparently transmitted from animal to animal by mere skin contact. This means that even the chameleon owner himself can bring the infectious spores e.g. from a reptile show and transmit them to his own chameleon. In the same way, a chameleon that has been apparently symptom-free up to now can bring the fungal spores with it into its new home. Another reason for quarantine when buying new chameleons! Paecilomyces and Metarhizium granulomatis can probably also be transmitted via the ingestion of infected insects.

Symptoms – What are signs of a fungal infection?

Affected skin areas discolor over time, becoming yellowish or brownish, sometimes greasy whitish-grey. The skin can become blistery. The altered skin areas slowly (often over months) become larger or new areas appear all over the body. More rarely, shortened shedding intervals to constant, uninterrupted shedding can be observed. Fungal infections can also occur secondarily as a concomitant of other diseases, for example in the course of pododermatitis or mouth rot.

Severe courses and infections with CANV or Nannizziopsis dermatitidis usually result in the formation of so-called granulomas, fungal knots. These are often visible as lumps on the skin. Granulomas in the tongue can become visible as small, yellow-white nodules, especially at the base of the tongue, and impede the chameleon in the shooting of insects. However, CANV and Nannizziopsis dermatitidis are dangerous above all because they can also affect other organs such as liver, lung, heart or kidney. This remains invisible to the owner until advanced organ damage occurs and the chameleon shows an increasingly poor general condition with restricted feed intake.

Generally, affected chameleons are unfortunately presented very late to the reptile veterinarian. The veterinarian examines the animal and takes swabs from conspicuous skin areas to initiate bacteriology as well as mycology and resistance testing. Even if a fungal infection is likely, a secondary bacterial infection of affected skin cannot be ruled out without a swab. In the case of advanced mycoses, a biopsy of affected skin areas in anesthesia may be necessary to distinguish the skin alteration from tumors. 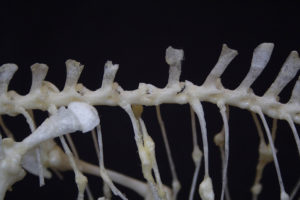 This chameleon died from an infection with Nannizziopsis dermatitidis – at the time of death, fungal granuloma was even found in ribs and vertebral processes

Not every fungus that can be detected by smear is actually pathogenic (disease-causing) for the chameleon. Therefore, both the swabbing and the selection of a suitable laboratory and the evaluation of the result should always be carried out by a veterinarian who is familiar with reptiles.

In the case of CANV or Nannizziopsis dermatitidis, further diagnostics in the form of x-rays, ultrasound, and blood tests may be useful. Often this fungus has long since spread throughout the chameleon’s entire body by the time the chameleon is presented in the veterinary practice. This is called a systemic infestation.

Dermatomycoses only have a good chance of healing if the chameleon is presented at an early stage to a reptile expert veterinary surgeon. The smaller the affected skin area, the better the prognosis. Small skin areas can be treated locally with one or more ointments prescribed by the veterinarian. In the case of several affected skin areas or even systemic spread, treatment with orally administered drugs may be necessary.

Fungal treatments usually last several weeks to months and should only be discontinued when the treating veterinarian deems it appropriate. In case of longer treatment intervals, it may be necessary to carry out regular blood tests to check organ values.

Unfortunately, the prognosis for CANV or Nannizziopsis dermatitidis is generally unfavorable. If the disease is already advanced, it usually cannot be cured. Infections in chameleons often end in Nannizziopsis with massive limitations in the quality of life due to severe organ damage. The animal must eventually be euthanized.